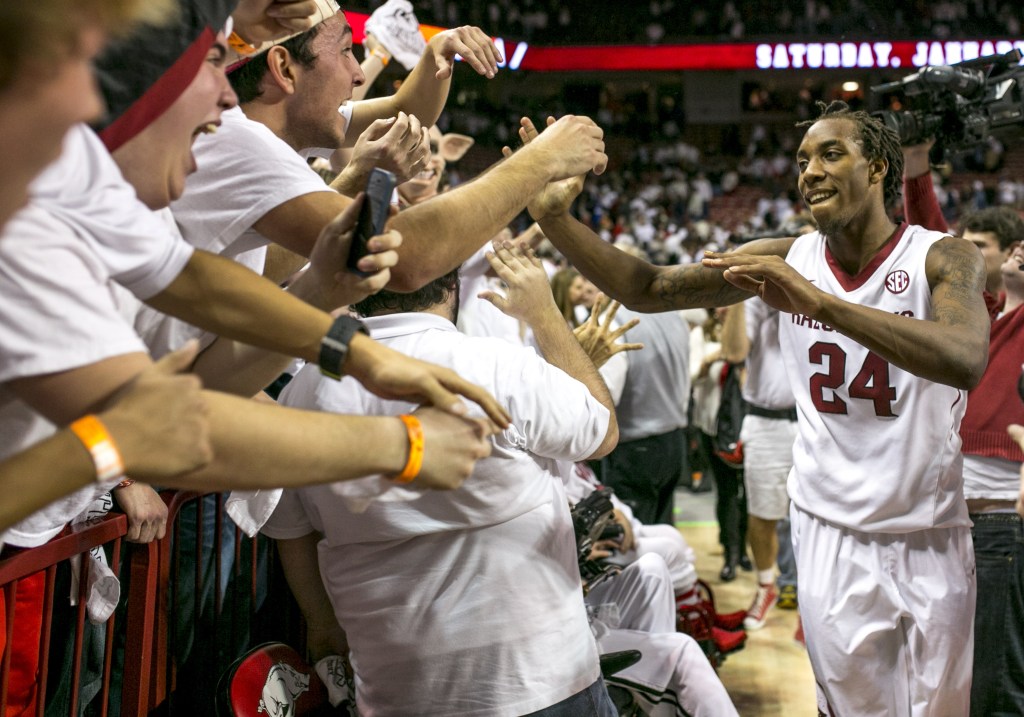 In case you were busy flopping down on a couch in the Oval Office, here’s what you missed in sports on Tuesday:

• A last-second putback slam from Michael Qualls gave the Arkansas Razorbacks an 87-85 overtime win over the Kentucky Wildcats. “If only I had more talent this never would have happened,” a distraught Kentucky head coach John Calipari said after the game. “Why must the world deprive me of talent? Well I’ll show the world what depriving John Calipari can do.” Calipari then took his left hand and rubbed it on his head, messing up his perfectly coiffed hair ever so slightly, while yelling, “You did this to me, unfair world! No! You did this to yourselves!”

• Third-ranked Wisconsin is undefeated no longer, after falling, 75-72, to the Indiana Hoosiers in Bloomington. Yogi Ferrell, who led the Hoosiers’ comeback with 19 second-half points, busted out his classic Yogiisms after the game, saying, “Well it wasn’t over until it was over. We’d lost to them 12 times in a row, so when we were down it felt like déjà vu all over again. But I’d say this game did more than exceed my expectations. It was a game that was 90 percent mental and half physical, and …” Ferrell then paused and asked if anyone had heard what he had said before, before adding, “Because I don’t think I really say everything I just said.”

• Marc Gasol’s return was a successful one for Memphis, as the Grizzlies grabbed a hard-fought 90-87 win over the Oklahoma City Thunder. “It’s good to be back, but I feel I must take personal time soon to help with a family matter,” Gasol explained after the game. Gasol then looked over his shoulders and whispered, “It’s my brother Pau. He’s in distress. And his captor sent me a note written in letters cut out from a magazine saying that if I don’t come to Los Angeles myself, he’ll never be set free. I must go away at the soonest possible opportunity. Who knows what further indignities he shall suffer?”

• The Detroit Lions named former Ravens offensive coordinator Jim Caldwell as their new head coach. The appointment of Caldwell, known best for being the brains adjacent to Peyton Manning in Indianapolis, ends the ongoing speculation that the Detroit Lions were not going to make the Detroit Lionsest head coaching hire possible.

• Despite scorching temperatures in Melbourne, Novak Djokovic stayed cool, winning his third-round match at the Australian Open, 6-0, 6-4, 6-4, over Leonardo Mayer. Because tennis is not my forte, I’m going to hand this joke over to the ghost of deceased Match Game ’76 host Gene Rayburn! What do you have for us Ghost Gene? “Some would say that it was so hot in Melbourne on Tuesday, Leonardo Mayer won eight ‘blanks’ against Novak Djokovic!” Man, that’s the absolute last time I do that. And the answer is games. Does that match, Ghost Gene? “Not with the ghost of Charles Nelson Reilly. He went with ‘breasts.'” Christ. You let in Ghost Gene Rayburn and all of a sudden he’s bringing along Ghost Charles Nelson Reilly. Seriously, never again.

• J.R. Smith was benched as Al Jefferson and the Charlotte Bobcats beat the Knicks, 108-98, snapping New York’s winning streak at five. With Tyson Chandler limited, the matchup was a tough one for the Knicks, who were forced to defend Jefferson at times with a combination of Carmelo Anthony and Andrea Bargnani. “I thought we had something with that matchup early,” Knicks coach Mike Woodson said. “I mean we got him to turn the ball over on his first two possessions. And sure, he only did so after laughing so hard when Bargs tried to body him up that the ball fell out of his hands, bounced off his foot, and rolled out of bounds. But when you have a matchup you can exploit, you gotta do whatever you can.”

• The Los Angeles Lakers continued their slide to irrelevance, falling, 120-118, to Luol Deng and the Cleveland Cavaliers. This happened in spite of the encouragement of bedraggled Lakers executive vice-president of player personnel Jim Buss, who, in a bid to show his family that he has the capacity to be proactive, showed up to the game with a sign that said, “DO GOOD ‘R ELSE,” written in cutout letters from old magazines. Hey, wait a second …

• Vincent Lecavalier netted the winning goal with 15 seconds on the clock as the Philadelphia Flyers grabbed a 4-3 win over the Buffalo Sabres. “Who’s to say that wasn’t a Sabres win?” asked Buffalo superfan Michael Phillips after the game. “I mean, maybe almost winning and then losing is the goal of all sports, and I’m the luckiest man in the world.” Phillips then tripped and fell down Ye Olde Bottomless Pit of Buffalloe as he yelled, “I died doing what I loved, almost not falling down Buffalo’s second-most famous bottomless piiiiiiiiiiit.”

Game of Secrets: The Conspiracy, the Controversy, and the Ninja Warrior Cover-up

Wisconsin's First Loss and the Value of the Road Win