About Last Night: A Brand-New Gator 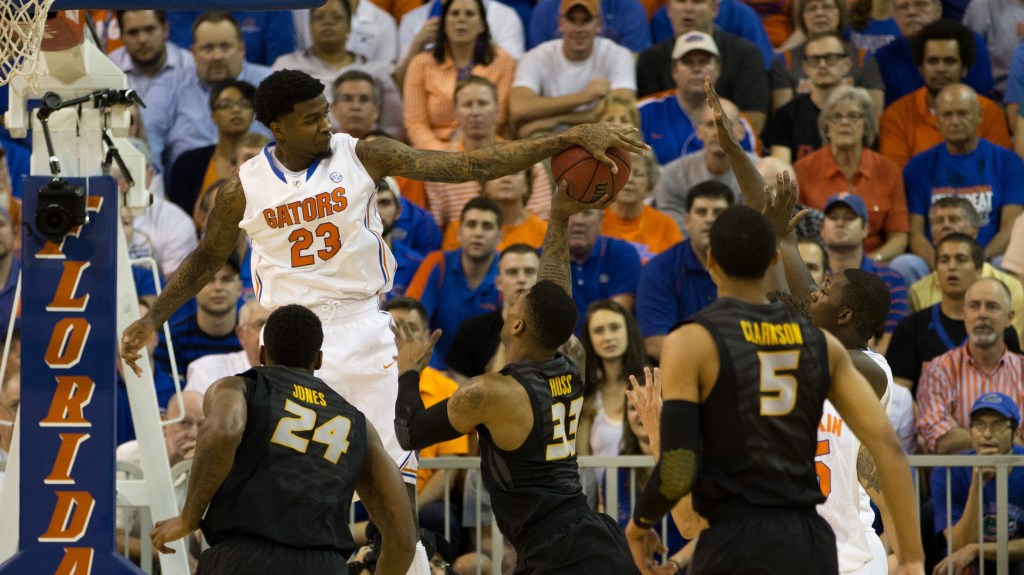 In case you were busy hearing wild thirdhand stories about Joe Torre’s hard-partying lifestyle in the 1970s, here’s what you missed in sports on Tuesday:

• Chris Walker made his Gators’ debut, and Michael Frazier II hit four second-half 3-pointers as Florida held off a feisty Missouri team, 68-58, to remain perfect in SEC play. “I’m all about those tossed salads and scrambled eggs, oh my,” Frazier II explained after the game. “But that’s quite literally the only thing I have in common with the fictional psychiatrist Frasier Crane, so please stop asking me about him. Good night, everybody.”

• Steve Nash’s return for Los Angeles was not enough as the Lakers fell to the Minnesota Timberwolves, 109-99. Although the Lakers dropped to 16-32 with the loss, team vice-president Jim Buss remained upbeat, saying, “We lose now, we win later. Wink. I have a handshake deal with a certain David Stern. Wink. Let’s just say that everyone else will be playing Ping-Pong, but we’ll be playing table tennis. Wink.” However, when Buss was told that Stern was no longer the NBA commissioner, rendering any under-the-table dealings moot, a tense silence hung in the room for a good three minutes before Buss yelled, “Why aren’t you winking? For god’s sake, wink!”

• The Atlanta Braves signed All-Star first baseman Freddie Freeman through 2021 with a deal worth at least $125 million. More like Freddie NOT-Freeman, am I right? Am I? I am, aren’t I? They’re totally paying him money to play baseball. This is just like when shortstop Yuniesky Betancourt stole so much money from the teams he played for that he had to go to court, and then bet his entire salary in Vegas to raise enough money to pay off his extensive legal bills. Classic Bet-in-court. I was totally right about that also.

• Richard Sherman revealed that his Seahawks defense was able to decipher Peyton Manning’s hand signals at the line of scrimmage during Super Bowl XLVIII, giving his team a crucial edge in what turned out to be a lopsided battle between the league’s top defense and top offense. Sherman went on to say that his team was vulnerable if Manning had implemented new route concepts in his audible packages. As a Seahawks fan, I would like to say, Richard, this time you went too far with your talk. We play the Broncos next year, potentially in the first game! Shhhhhhh! When asked what happened, say, “We got lucky to win with magic!” Don’t say exactly what you did to gain an edge and how that edge could be overcome! Come on, man.

• 34-year-old former NBA star Tracy McGrady is going to try to follow in Michael Jordan’s footsteps as he pursues a minor league baseball career in the wake of his retirement from professional basketball. However, this story has some details that are making me deeply suspicious. Namely, Tracy McGrady is not 34. Nope. Not possible. I’m not even going to look it up. And you shouldn’t either. Let’s all just agree that Tracy McGrady cannot be 34 and move on forever.

• Texas overcame some first-half struggles before Jonathan Holmes powered a resilient Longhorns team to a 59-54 win over TCU. The win was Texas’s seventh in a row, so allow me to unironically tip my cap to Rick Barnes and his team for a strong start to the Big 12 season. Hold on … man, this is hard … my brain is sending signals to my wrist, but my wrist just can’t do it … come on … sorry, guys, everything in my body is rejecting this gesture … oh, it’s happening … tipping … tipping … there it is: an official tip of the cap to Rick Barnes. Now if you’ll all excuse me, I need to take a long, cold shower.

Just How Bad Is the Scene in Sochi?