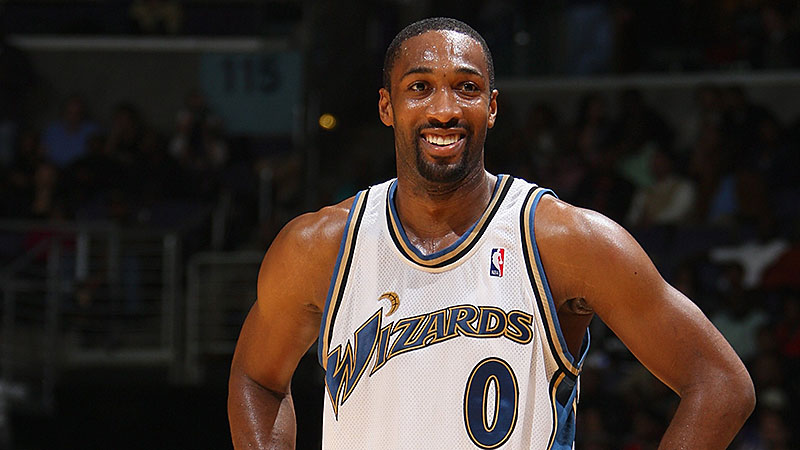 The time was Halloween night, 2009. The place was Washington, D.C. Gilbert Arenas had just scored 32 points to lead the Wizards to a victory over the New Jersey Nets. The players, both in the sense of the athletes taking part in the game and the actors in this historically significant American drama, included the following: Chris Douglas-Roberts, Yi Jianlian, and Rafer Alston for the Nets. The Wizards? Dressing for the Wiz that night were the aforementioned Agent Zero, JaVale McGee, Andray Blatche, Nick Young, and Randy Foye. That’s the coach-killer Beatles right there. And this, this night was their Ed Sullivan Show performance.

It would take the Washington professional basketball team four and a half years to have a winning percentage as good what they had that night. The mood in the locker room after the game that night had both a fin de siècle and beginning de siècle feel. Maybe it was a beginning de fin de siècle. Things can get pretty fluid when you’re talking about a team with DeShawn Stevenson on it.

Arenas’s 32 was his second 30-or-more-point game in the first three contests of the season. But it was Blatche who was under the spotlight. He scored 30 points in 28 minutes on 15-of-18 shooting. Basketball-Reference heads write songs about nights like that. The Wizards, then 2-1, were stunting. About Blatche, Brendan Haywood said, “If he does the interview with shades on, I’m leaving!”

This team, though, was really all about Gil. Just look at the highlights from that era, like this montage of Agent Zero 2009-10 highlights set to Kanye’s “Stronger” …

I mean, come on. Obviously, peak Gilbert is  2005-07. A knee injury forced him to miss most of the 2007-08 and 2008-09 seasons. This was his comeback, and he came out of the gates with a battery in his back. I asked Joe House, one of our two resident Wizards fans, what he remembered about this ’09 team and he wrote me back this torn-from-the-pages-of-a–Downton Abbey–script missive:

The 2009-10 team that WAS SO LOADED THAT ERNIE CLUELESS GRUNFELD GAVE AWAY THE 5TH OVERALL PICK IN THE DRAFT FOR RANDY FOYE & MIKE MILLER. SO that team was the tipping point for the super-familiar cycle here in DC of a poorly constructed, ill-conceived group built around a flawed premise (i.e., that Gil’s return from injury would feature a quick reestablishment of Agent Zero) inflated by unrealistic expectations and ill-founded hope that ended approximately 30 games into the season with Finga Gunz, an episode so ridiculous and cliched that no one would be dumb enough to imagine it as fiction.  #SOFUCKINGWIZARDS

I also asked Sharp, our other Wiz fan. He simply said “2005-2009, nobody was on the Wizards’ level. That was the team that made me love the NBA forever.” Sharp isn’t allowed to write about the Wizards because when he does, bad things happen to Bradley Beal. But his sentiment, even as a Wizards fan, isn’t that unique. For a lot of people, that Wiz team, with all those characters, was the subject of a crazy, screwed-up love affair. The kind of relationship where you find yourself standing outside on your porch, locked out of your house in your underwear, and you have no idea how it happened and you can’t wait to do it again the next night.

But there he is! And it’s like watching a pterodactyl play saxophone! Nobody really cared about wins and losses with these guys. They were pure entertainment; basketball for (usually bad) basketball’s sake.

Of course, this all ended very, very badly. As House alluded to, there were various incidents, off the court, that effectively ended Gilbert’s career. Once he returned to the league, after his suspension, Arenas was decent, but he was never Agent Zero. And the Wizards were never the Wiz again.

This current team, led by John Wall and Bradley Beal, has some players. My feelings for John Wall are pretty well-documented, and I wouldn’t be surprised if his exclusion from the U.S. national team plunges this country into an emotional, if not financial, depression. This is the first time the Wizards have a winning record in Wall’s career, and I hope he and Washington keep one for a long time to come. I genuinely like guys like Jan Vesely and Marcin Gortat. And Trevor Ariza remains one of the more underrated guys in the Eastern Conference. They have players, but they don’t have characters. It’s not the same thing as the team having character. I know there’s been a knucklehead purge in Washington over the last few seasons. And most of these guys, superficially, seem to have their heads screwed on right. That kind of thing is important. I like these guys. But as they slowly start to put it together, I couldn’t help but remember the inglorious bastards from that 2009 team. That was a team that I loved.

About Last Night: A Brand-New Gator