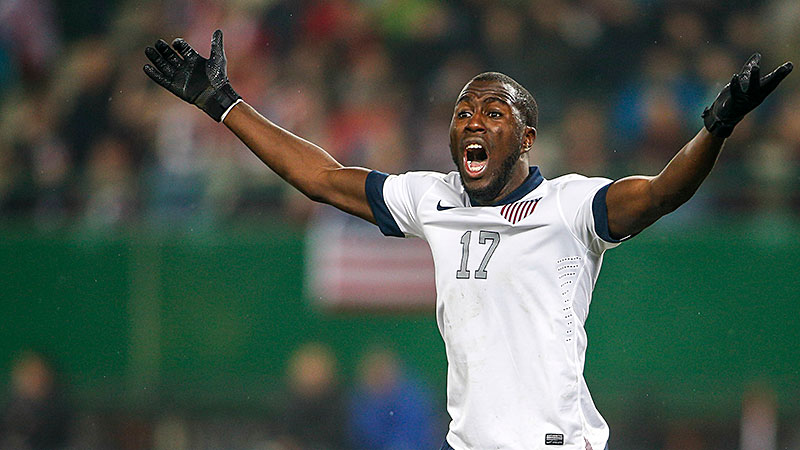 Late last year, I took a trip out to Portland, Oregon, to see the Adidas factory, just as they were unveiling their plans for the World Cup. While there I took some time to interview Ernesto Bruce, head of Adidas in North America. In particular, I wanted to talk about the relationship the company has historically had with Major League Soccer, as one of the first big companies to adopt a high-profile partnership with the league — and in particular the development of Generation Adidas, the company-sponsored program for promising young players in MLS. Several of this year’s GA players are currently enjoying their first full week’s training with their new clubs as preseason gets under way, so now seemed a good time to revisit this conversation.

I started by asking Bruce about the company’s history with MLS.

“We’ve been a partner of MLS since its inception,” he said. “It started off with us partnering with three teams: Columbus Crew, D.C. United, and Kansas City. When we started out, there were obviously a lot of different sponsors in play, and in 2005 we made a push to partner with the whole league — to be an all-league sponsor … Strategically, 2005, going into the 2006 World Cup, we went all-league. We outfitted all the teams, and it was a substantial investment that we decided to make because we felt, one, that it would move the game forward, and two, we saw long-term opportunity.

“The business opportunity really wasn’t there until further down the line. The immediate opportunity was that we could work with MLS to restructure the landscape in the U.S. It really wasn’t working. It was very, very segmented. You had youth clubs developing players in a certain way; you had colleges developing them in a certain way; you then had the national team with their way; you had different coaching licenses; you had the NSCAA; you had the U.S. Federation.”

And then there was you …

We were in that game. It was a mess. The national team had not been performing. So from our lens of partnering with some of the world’s best federations, we said, “This needs to change — the country needs to change.” And it needed to start to go in a way of the professional teams in the U.S. should be the ones developing the players for the national team.

So that was 2005, and by the aftermath of the 2010 World Cup, the landscape had already started to change. The MLS clubs were becoming more and more relevant. ESPN came in and did the ESPN deal with MLS, so in 2010 we sat down with MLS again and said, “Let’s redo our deal. We want to pump more investment into it, and we want to move more of that investment into player development and building up the league.” So we put more financial backing into the marketing and the player development side. MLS youth academies started coming into play in 2010. The MLS commissioner mandated that each club have two youth teams, so again, that wasn’t part of our original deal, but we wanted to make sure that we outfitted and supported those two teams. And that’s where we are today.

For all that Adidas focuses on an international perspective and you’ve talked about partnerships with other federations, you also run Generation Adidas, and it’s a model that’s very particular to the American game.

Generation Adidas is truly meant to work within the U.S. model, which is that college has a huge amount of value in the U.S. In other countries, you want to become a professional player — that’s it. That’s your payday, that’s your dream, to become a professional player. Here, education has a tremendous amount of value. Here, you want to play, hopefully become a professional, but really in the back of your head you’re going, I need a college education so I can get a job in case my leg gets broken. So we said, let’s start a program that will essentially pay for their college education.

So, one, we gave [players] roster protection. That means you don’t count against the salary cap, which means that now you go on to a three-year contract, and now you can go into it with a clear mindset and say, “I’ve got three years to develop. I can continue my education within that window.” Some of those guys have done it, they’ve either taken night school, or if for some reason you decide not to play or you’ve had a career-ending injury, you can still get your degree and we will pay for it. A weight is lifted off the players and, probably most importantly, a weight is lifted off the parents. The parents can now push their kids and say, “Go be a pro. We support you.” Versus what we hear a lot of kids talk about when we approach them, which is, “Oh no — my parents — I have to have a college education.”

So when did you begin seeing the model working?

I look at a Jozy Altidore. Jozy was a young kid on the U-17 national team, and he had a choice to make. I remember being in on those conversations with Jozy and his family, and for them it was an easy decision. They said, “Wait, our kid can still get an education? Wait, you guys will pay for his education and he has the opportunity to become a professional player, and he won’t get cut after three months or six months?” “No, because we believe in him and he shows the potential.” They signed up right away and it’s paid off … But now for him to be doing what he’s doing on the national team is what we all envisioned.

And the point at which we see significant professional input on a player’s development happening is getting earlier and earlier, right?

What evolved from Generation Adidas is [our support for] the homegrown player. It protects the team to invest in those younger players, because then they won’t lose them. So they can tag them as a homegrown player and say, “We’ll invest in you. We’ll pay for all your travel, We’ll pay for all your academy, we’ll maybe even pay for your education in some cases.” Toronto FC, for example, have an education program.

For us it’s a great investment. It’s a pretty even split between Adidas and MLS. The league may pay the player’s salary; we’ll then supplement that with college education. We market the program fairly heavily, we take the kids on an international trip, and part of that salary is funded through our investment in the league as a whole.

But is there a sense that you end up developing a more sophisticated farm system for players to leave for Europe rather than developing the game in the U.S.?

Jozy. I … secretly, I want him back. I think having a player like that, who’s had international experience, to have Jozy come back into MLS, sends a message to young kids. It says: “Become a pro. If the opportunity presents itself you can go and have an experience abroad, but MLS is just as good, if not better, or different, than any other league in the world. Don’t come back here when you’re at the end of the road.” I’m not as excited about that, but I think if Jozy, say, were to come back in his prime it sends a huge message.

Those meaningful local connections, not just to the U.S. and Canada, but to specific cities and specific soccer scenes, are vitally important for the future, aren’t they?

I think the minute a kid from your hometown comes up through that system, when he shows up on the field, you automatically, one, root for him, two, you support him, and three, now you fall in love with that team. You go, That kid grew up in my neighborhood. When Jozy was playing for the Red Bulls, he was loved. He left, and when that kid comes back some day, if he ever plays for the Red Bulls again, that stadium will go nuts. He’ll connect with so many followers.

And then those kids grow up and take the field themselves …

Those moments take time. It’s now getting to that tipping point where those young kids that were going to the matches are now playing. The players that have now graduated out of MLS are having kids and now you start to build a legacy, now you start to build an inheritance. I grew up in South America. I grew up playing. In the back of our heads, our dream was to play for Chelsea, Real Madrid, Liverpool. We watched Champions League for that, and we were like, “Can you imagine ever playing for one of those teams?” But we didn’t have in our mindset, I want to play for MY club. Instead, we all wanted play for University of Portland. So that’s part of the landscape that’s definitely beginning to change.

Now you go into those markets — and we do a lot of focus groups — we show kids product, we talk to them and ask them who their favorite player is, who their favorite team is. Two years ago, 90 percent of those kids were telling us international clubs. You go into an MLS market now, and you ask those kids their favorite team, 60 percent of those kids have already switched. They’re saying that their favorite club is their local MLS club: Sporting Kansas City, Columbus Crew, Portland Timbers, you name it. It’s really starting to now turn, because those kids are playing through that youth academy system, and more importantly the guy that they’re playing with didn’t get a scholarship to some great school, they got drafted and they’re showing up in MLS on ESPN. Now that hunger starts to come to life.

Warroad, Minnesota, by the numbers: 1,781 people, two stoplights, one Frosty Festival (?), and a bunch of Olympians.