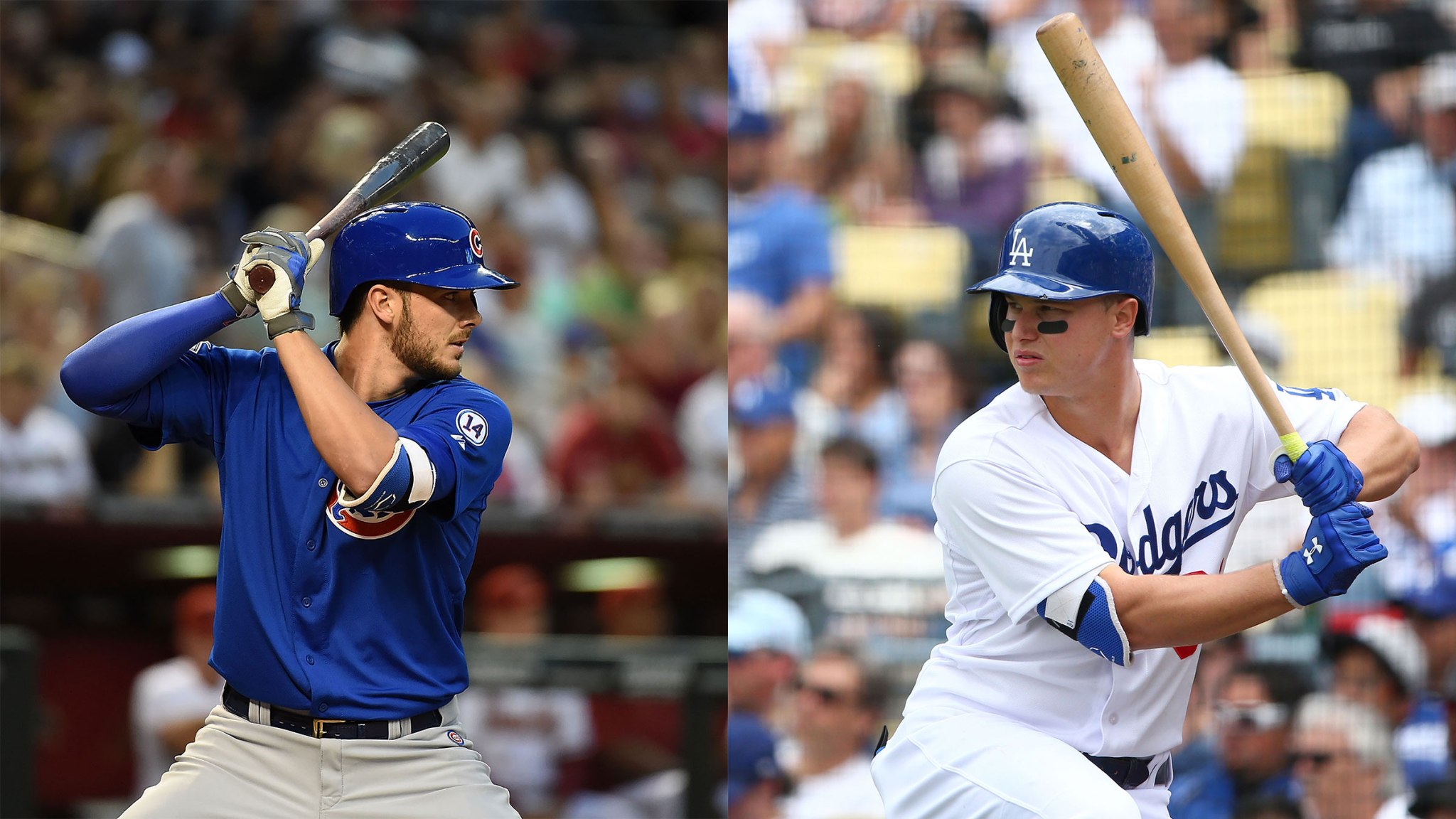 For all the fanfare that surrounds every hot prospect making his major league debut, the Rookie of the Year results don’t often seem to match up with the hype. Service time manipulation, cyclical downturns in talent, and plenty of other factors mean the biggest names and best players don’t always win. To wit: Ken Griffey Jr. wasn’t a Rookie of the Year, but Carl Morton, Joe Charboneau, Bob Hamelin, Scott Williamson, Geovany Soto, Andrew Bailey, and Chris Coghlan1 all were.

The good news is that this year’s National League Rookie of the Year race could be one of the best we’ve seen in the 68-year history of the award.2 It features two hitters destroying opposing pitching — while playing for playoff-contending teams. And although we can never be certain about the future, you should feel confident in rooting for Joc Pederson and Kris Bryant, because their greatness will likely last a long time.

We’ve already told you about Pederson, but it’s time for an update. After a .303/.435/.582 line with 33 homers and 30 steals in 121 games at Triple-A Albuquerque last year, the Bashing Boychik is batting .249/.391/.539 in his first full year in the bigs. He ranks fifth among all batting-title-qualified National League hitters in on-base percentage, seventh in slugging, seventh in times on base, sixth in homers, third in walks, and, well, just head to his Baseball-Reference page, scroll down, and you’ll drown in top-10 stats. He also ranks sixth among all major league center fielders this year in Defensive Runs Saved and first in three true outcome stats, making him something like a cross between Andruw Jones and Jack Cust.3 Among rookies, he leads the pack in too many categories to count, including Wins Above Replacement and goofy Starbucks runs. Simply put, he is a joy to watch — and he’s making the Matt Kemp trade look better by the day.

Unlike Pederson, Bryant’s 2015 debut was delayed nearly weeks due to Chicago’s service-time concerns, but with a .325/.438/.661 line and 43 homers in 138 games last year between Double-A and Triple-A, he was expected to slot directly into the heart of the Cubs lineup as soon as he arrived. That’s exactly what’s happened, and from day one, Bryant has shown an advanced approach at the plate, working lots of deep counts that lead to lots of strikeouts but also plenty of walks. His tape-measure power took a while to show up — he didn’t hit his first homer until his 21st major league game — but since then he’s shown both on-base prowess and lots of pop, batting .278/.383/.474 with 10 homers in 63 games. Thanks to the Cubs’ patience, and the shrewd long-term deal they gave Bryant’s wingman, Anthony Rizzo, potentially the best offensive one-two punch in the majors could be playing on the North Side all the way through 2021.

Still, if you were handicapping the 2015 Rookie of the Year race right now, you’d have to give the edge to Pederson. He’s launched nearly twice as many home runs as Bryant and has produced better on-base and slugging numbers despite playing in a tougher park for hitters. That being said, the race is far from over. A few myopic voters might penalize Pederson for his pedestrian batting average or credit Bryant for a higher RBI count without considering how lineup order affects that stat. And of course, with such immense power potential, Bryant could simply start making bleacher bums run for their lives every time he comes to bat. However the race shakes out, these are two spectacular talents with a chance to have long, productive careers, and maybe even do what Derek Jeter did: Break into the majors and power your team to a World Series in the same season.

So while we wait to see how Pederson vs. Bryant shakes out, let’s take a look at some of the greatest Rookie of the Year battles from seasons past. I went back to 1947 and looked at every RoY race — from Jackie Robinson in year one through last year’s winners — to see how they all stacked up. Here’s my very subjective top five, graded on an extremely scientific ranking system that combines close voting results, overall quality of rookie seasons, lasting player impact, and fun story lines:

It’s a tie of two ties, as these two races represent the only times the Rookie of the Year award ended in a dead heat. The Padres’ Butch Metzger and the Reds’ Pat Zachry shared the NL award in ’76, which is a bit of a puzzler considering Zachry tossed 81 more innings, struck out 54 more batters, posted a slightly lower ERA, and (because people cared a lot about these kinds of things four decades ago) won three more games than Metzger did. The ’79 AL race was a tie between the Twins’ John Castino and the Jays’ Alfredo Griffin. Neither player was all that exciting offensively (they combined to hit seven home runs), but Griffin did provide speed and defense for a Jays team that was on its way to becoming a model organization for scouting and player development. As for lasting impact? These four players combined to play in just two All-Star Games over their entire careers.

I love this one for two reasons. First, future Hall of Famer Andre Dawson won the award with 10 votes,4 thus becoming the only Montreal Expo ever to win RoY honors. Second, the race could have easily gone another way. Runner-up Steve Henderson of the Mets earned just one less vote. Henderson was a key piece in the “Midnight Massacre,” the late-night deal in which the Mets traded legendary right-hander Tom Seaver to the Reds for four players. Seaver did dominate for the rest of that season in Cincinnati (14-3 with a 2.34 ERA), but Henderson acquitted himself well, too, making his major league debut for the Mets the day after the trade, batting .297/.372/.480 the rest of that season and running neck-and-neck with Seaver over the following four years in Wins Above Replacement. Both players tailed off after that, and while Seaver put up a pair of decent late-career seasons in ’84 and ’85, it never justified the initial teeth-gnashing that accompanied the deal.5

Yankees third/second baseman Gil McDougald (.306/.396/.488, 4.6 WAR) edged Minnie Minoso (.326/.422/.500, 5.5 WAR), an outfielder for most of his career who split time early on between right field, left field, and third base. Both players went on to have excellent careers: McDougald was a five-time All-Star and Minoso was both a symbol of longevity (a series of apparent retirements begat several comebacks, and he played in parts of five decades) and a legitimately excellent player (he racked up almost as many Wins Above Replacement as Sandy Koufax). Minoso also qualifies as one of the biggest “what ifs” in Indians history, as Cleveland shipped him to the White Sox in a seven-player trade on April 30, 1951, during his RoY season and right before his career took off.6

The closest Rookie of the Year contest of all time that didn’t end in a tie saw the Brewers’ Ryan Braun edge out the Rockies’ Troy Tulowitzki, 128 points to 126. There was no justice this year, though, as Tulowitzki crushed Braun by Wins Above Replacement (6.8 to 2.0), played in 42 more games, and flashed Gold Glove–caliber defense at short, while Braun scuffled at third base. Still, smashing 34 homers in 113 games while leading the league in slugging, as Braun did, isn’t too shabby either. Bonus points for a deep crop of talent: Braun and Tulo are both young enough and talented enough to make future Hall of Fame consideration possible.7 Hunter Pence finishing third rounds out one of the best top-three rookie classes of all time.

This one checks all of our boxes. Two rookies having terrific seasons, two players who went on to have great careers, and a race decided by only one vote. That year’s winner — 10.5 to 9.5 — was Johnny Bench, the Reds catching phenom who batted .275/.311/.433 (big numbers for one of the worst leaguewide offensive seasons of all time), terrified opposing baserunners with his cannon arm, and tallied five Wins Above Replacement. Bench’s competition, Mets left-hander Jerry Koosman, fired a mind-boggling 263.2 innings, winning 19 games and putting up a 2.08 ERA, good for six Wins Above Replacement. Kooz became a leading man on the ’69 Miracle Mets the next year and enjoyed an illustrious 19-year MLB career. (He actually did out-WAR Koufax, as well as Kirby Puckett and lots of other Hall of Famers.) And regarding the best catcher of all time: To see the start of Bench’s career — not to mention the first glimmer of the Big Red Machine, which would become one of the greatest dynasties in baseball history — must have been something to behold. If they weren’t in the midst of trying to create some history of their own, we’d grab Pederson and Bryant, hop into a flying DeLorean, head back to 1968, and snag three seats behind home plate at Crosley Field.

This piece has been updated to correct the location of the Dodgers’ Triple-A team.