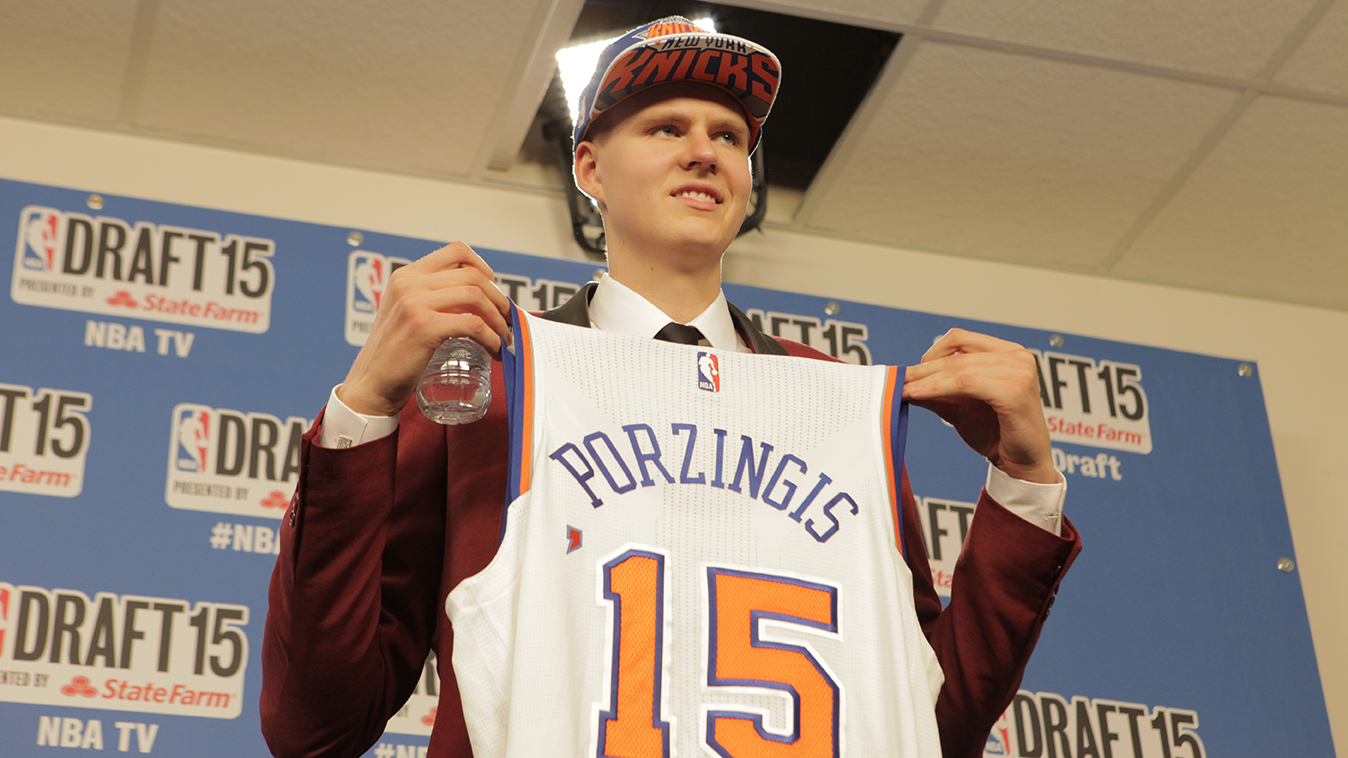 It’s a quarter past 8 p.m. on draft night, and I’m being pulled through the pale cinder-block corridors of Barclays Center in the comet’s tail of Kristaps Porzingis. He has just been drafted with the no. 4 pick. He strides, somewhat sheepishly for a gigantic human being, toward the interview room. Perhaps I buried the lede; the 7-foot-1 stretch shooting forward out of Latvia, by way of Sevilla, is a Knick. #Knickstaps.

Porzingis stops in the middle of the hallway outside the interview room. The brim of his Knicks snapback is shading his eyes from the camera lights. A cell phone appears in his hand. With about 30 people crowding around him and while he’s being observed by countless video and phone cameras, Porzingis begins speaking, in English, with whomever is on the other end.

I consider how awkward it must be to have a phone conversation as a few dozen people look on and listen in. And then I remember that Porzingis has just been booed by the several thousand Knicks fans in attendance. Making a phone call in front of a bunch of strangers probably seems pretty minor after that.

The booing and the particular history of drafting European bigs, especially in New York,1 seem to be the topics of the phone call.

“I’m not concerned about that,” he says into the phone. “I know I need to get stronger, but, for me, I just know that I take a good example from the Europeans that played and had great careers in the NBA, and I’m going to be one of them.” He pauses, listening. “Thank you.” Then he hangs up and walks into the press room.

He sounds confident. Which makes sense. The greatest organization in the NBA has just selected him in the first round. 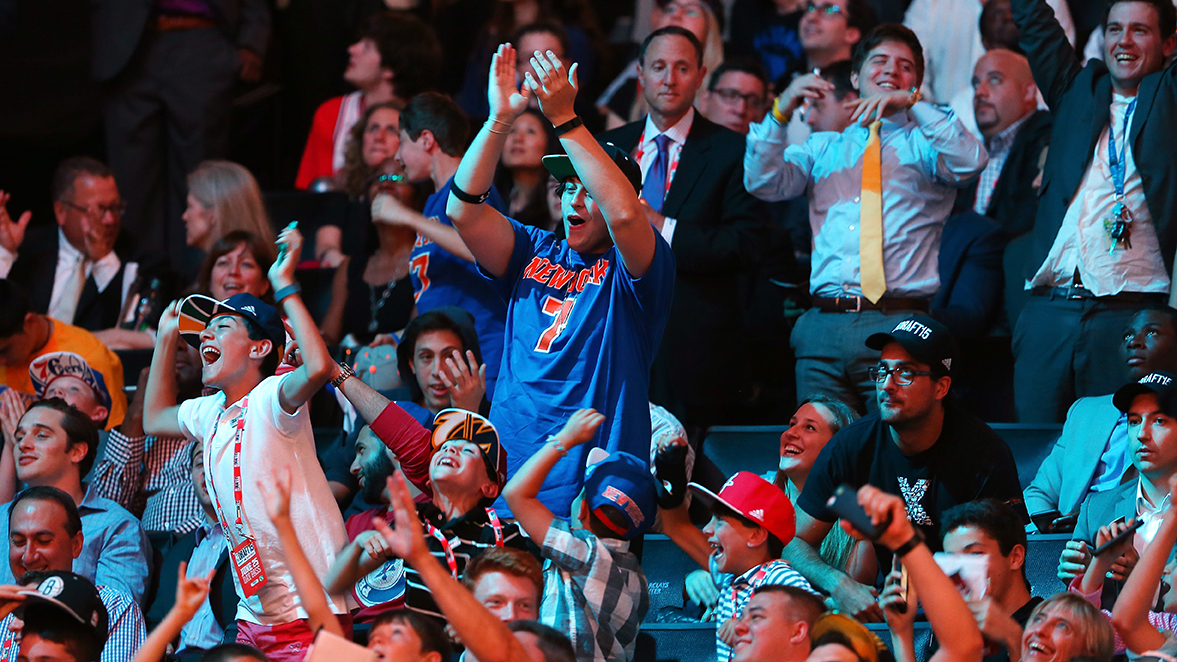 Kristaps Porzingis may end up a bust. It’s likely he won’t contribute much this season. But, as a Knicks fan, I like the ambition behind this pick. Or, to put it a better way while borrowing some language from the Sixers, I dig the process that would lead the Knicks to making this pick.

From the outside looking in, it doesn’t seem like the timeline of Porzingis’s development is simpatico with the hard realities of having a 31-year-old star on the second year of a five-year near-max deal. But if Porzingis develops into the player his admirers think he can be, then he’s something to build on — a bridge to the future beyond Carmelo.

Knicks fans have wanted this team to think long-term, to stop flipping picks and young players for overpriced vets, to stop hunting for the final piece to a puzzle they’ve never even started to assemble. Phil Jackson did that last night. It may not work; the Knicks will need some luck. They could’ve taken the all-around balling Justise Winslow, or the long and athletic wide receiver turned defensive destroyer Willie Trill Cauley-Stein. Instead, they took a hard swing full of risk, but potentially laden with reward. Whether Porzingis works out or not, this process — working this way, thinking beyond the next two, three, or even five years — is how you build a team.

Jackson is a cipher. On one hand (or rather, on both hands plus an extra finger), his résumé is unimpeachable. On the other hand, there are the things he says and the things he tweets — ranging from quasi-spiritual invocations of the basketball gods to antediluvian pronouncements on the state of the game to the now immortal goink. Let’s consider that last one for a moment.

In the days leading up to the draft, I struggled to determine Jackson’s true identity. Was he truly a half-mad, acid-addled merry prankster who kumbaya’d his way to two fistfuls of rings before reigning over the Knicks like an out-of-touch commune dweller blasting Freedom Rock on vinyl, or was he putting us on with that act and merely being a troll? The “goink” tweet, and his explanation of it in an interview with the New York Times, was certainly bizarre.

The idea that the lead executive of an NBA team would need or want to turn to Twitter for, like, some stats on 3-point percentage is beyond crazy. Believe it or not, the Knicks actually have analytics people on staff who ostensibly could tell Jackson that 3 > 2. It seems pretty obvious that, with the Warriors then down 2-1 to the Grizzlies, he was trying to tease proponents of the 3, and fans of modern basketball in general. It beggars belief that Jackson actually thinks people would buy “goink” as “one of those New York expressions that we use.”

Jackson’s statements about the elevation of the 3-pointer in the modern game were troubling to any Knicks fan who wants to see a competitive team. And they had a right to be nervous going into last night’s draft.

As draft day rolled on, there was copious smoke surrounding the idea that the Knicks might set the no. 4 pick on fire by selecting Frank “The Tank” Kaminsky, the kind of pass-shoot-move big man that Jackson covets because He Can Play in the Triangle™. By all lights of reason and sense, Kaminsky should not have been taken with the fourth pick. There had been several reports of the Knicks wanting to trade down to take Kaminsky or Kentucky’s Trey Lyles. But when it came time for New York to make the no. 4 pick, it made a move with an eye toward creating a sustainable future.

Later in the evening, the team did a little business in the present. The Knicks sent Tim Hardaway Jr. to Atlanta for the 19th pick, which became Notre Dame’s spring-booted Jerian Grant. Porzingis will be a project, and much of Jackson’s reputation as an executive will depend on him not turning into yet another Euro-stiff. But getting a first-round pick for Hardaway — a poor defender and abysmal rebounder for his size, with nonexistent court vision — is a steal. Usually the Knicks are the ones getting robbed, but this time they did the boosting. This draft will ultimately be measured by Porzingis’s success, but Hardaway-for-Grant is the kind of sturdy, smart deal that appears to be a triumph.

Jackson has always been a fan of gamesmanship. Is it possible he’s not quite the stoner-philosopher we think he is? I’m still not sure.

But I’m happy to weigh his actions as an executive over his words. Especially after last night.