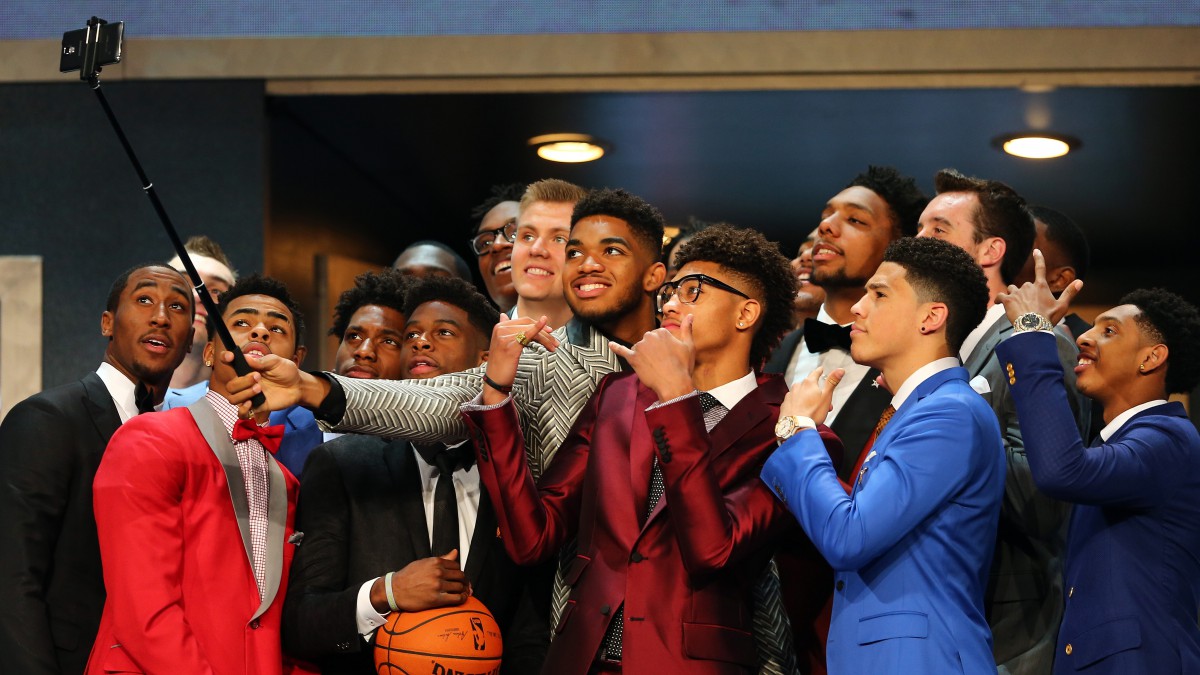 Is it possible the NBA draft stylists have heard the news? That people in the 21st century tend to watch this thing — which lasted for more than four hours last night on ESPN1 — on high-definition screens, and that under those circumstances, gray might not be the color to which to pledge allegiance? Maybe the style has been relatively muted the last two years because the players have been focused. Forget fashion: They want to win so bad. That attitude might have been admirable, but the last two drafts have been sleepy. One tab of drably attired Ambien after the next. By the 10th pick, you were in risk of lethal overdose.

This year, the clouds of charcoal and slate and concrete parted. Color came through. Fabrics were visible from couches and barstools. Not only were these guys being dressed for television, they were being styled for fun. You could see an influence that didn’t, for a change, hail from Wall Street. It came from the 1990s: Arsenio Hall, Tony! Toni! Toné!, and Bobby Brown. This is also what’s going on with pop now, with Janelle Monae, Wiz Khalifa, Bruno Mars, and Miguel doing luxury upgrades of New Jack–era ideas. Indeed, the best getups let you forget that these guys were ascending a podium to shake commissioner Adam Silver’s hand; you might assume they’d just won best male singer at the Soul Train Awards. 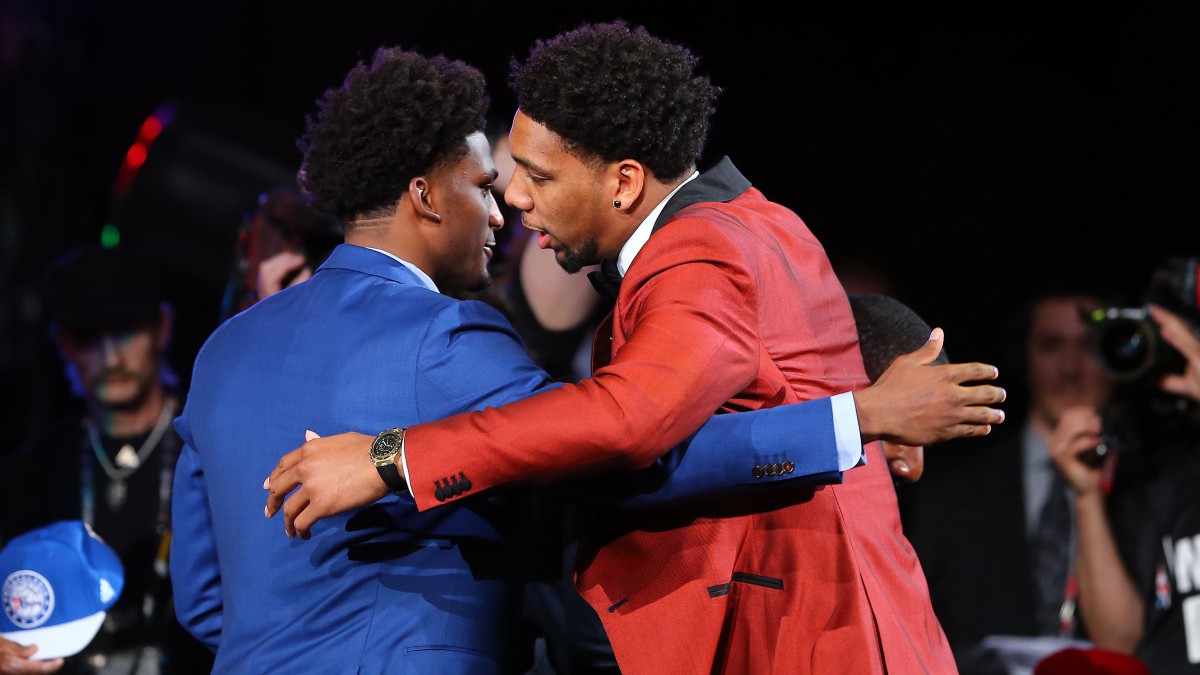 As one lanky, brightly attired college freshman after another got up to accept his first adult job, there was something a little same-y about it all. It was as if Tim Gunn and Heidi Klum were overseeing a particularly pesky design challenge: “Turn these no. 2 pencils into Crayolas.” There were lots of thankless accessories (too many unneeded tie bars, too many hankies) and similar leathery, silken details in similar places. At this point, if I were a young person, I’d want my stylist to come from Saturn or wherever designer Henrik Vibskov gets his ideas. But, look: I’ll take “used Bruno Mars” over “old church deacon” any day. 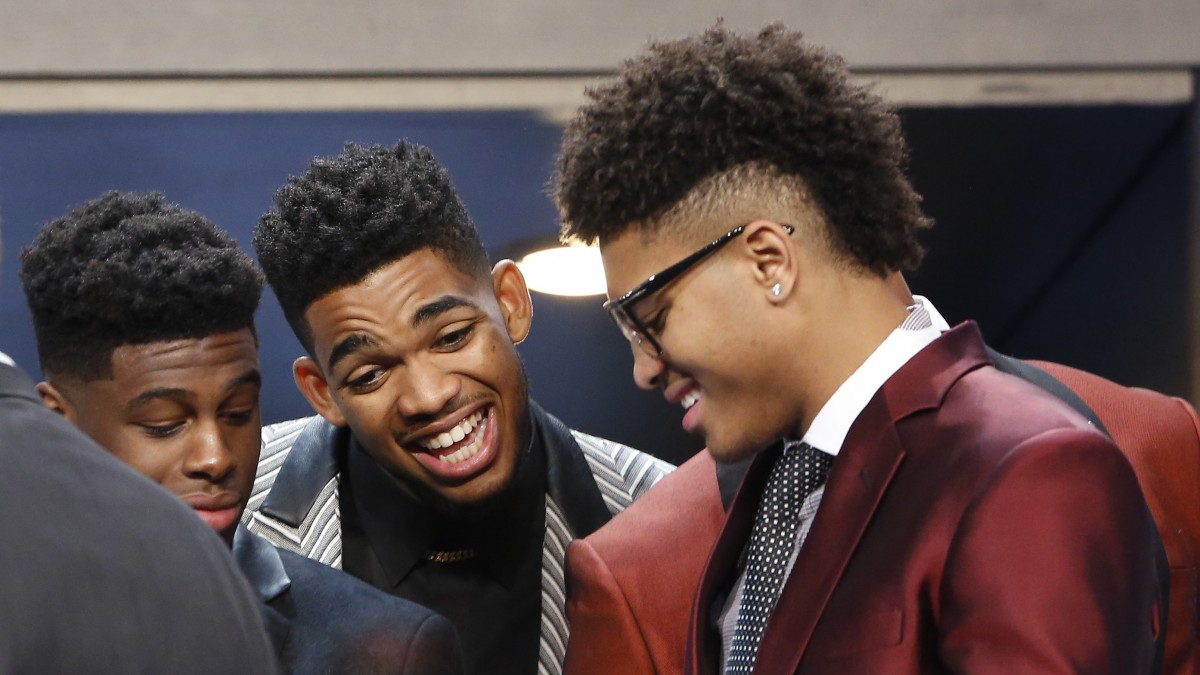 The Xeroxing even extends to all the cushiony, skyscraping hair. It’s all over the league: texturized boxes and high-top fades. It is ’90s hip-hop, but with the modernized, naturalized softness of the icons and goddesses ruling the covers of Essence. You’re drawn to it because, at that volume, black hair takes on a snowflake’s specialness. None of it sits or stands or curls the same way. It’s an easy, convincing bid for individuality. Karl-Anthony Towns’s box was a crop of this-way-and-that curls. He wore a double-breasted gray blazer of zoomed-in herringbone, with a panel of dark leather (or something) on the collar, over a silky black shirt with a watch chain looped around the collar. He went first, to the Timberwolves, and when he rose from his table, I felt certain that Al B. Sure! was his spirit animal. 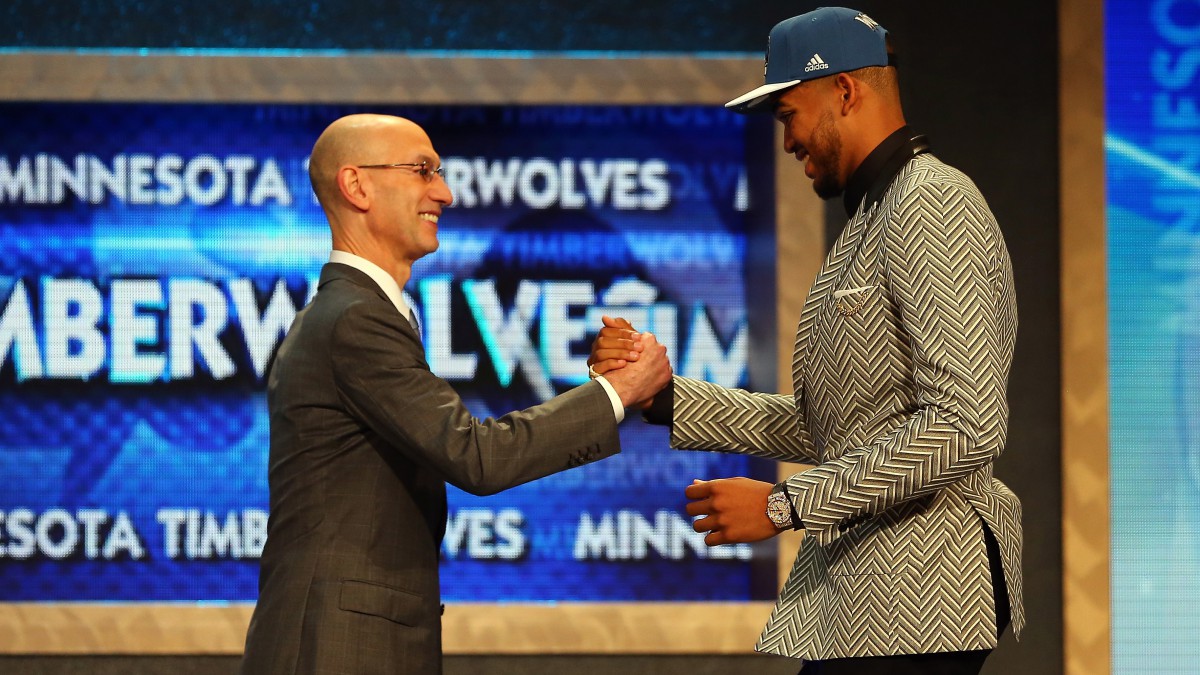 Then my heart sank. Towns had been miked, and the audio equipment affixed to the back of his thin black pants ruined the hang of the jacket. He climbed the stage stairs to Silver with a battery pack twerking on his rear. Worse, the scrawl junking up the bottom of the screen blocked a full view of the entire getup. The stylists have enough to do, but lobbying for more full-length shots ought to be added to the list. So should having one of the 500 correspondents covering the evening ask, “Who” — and, when appropriate “what” — “are you wearing?” 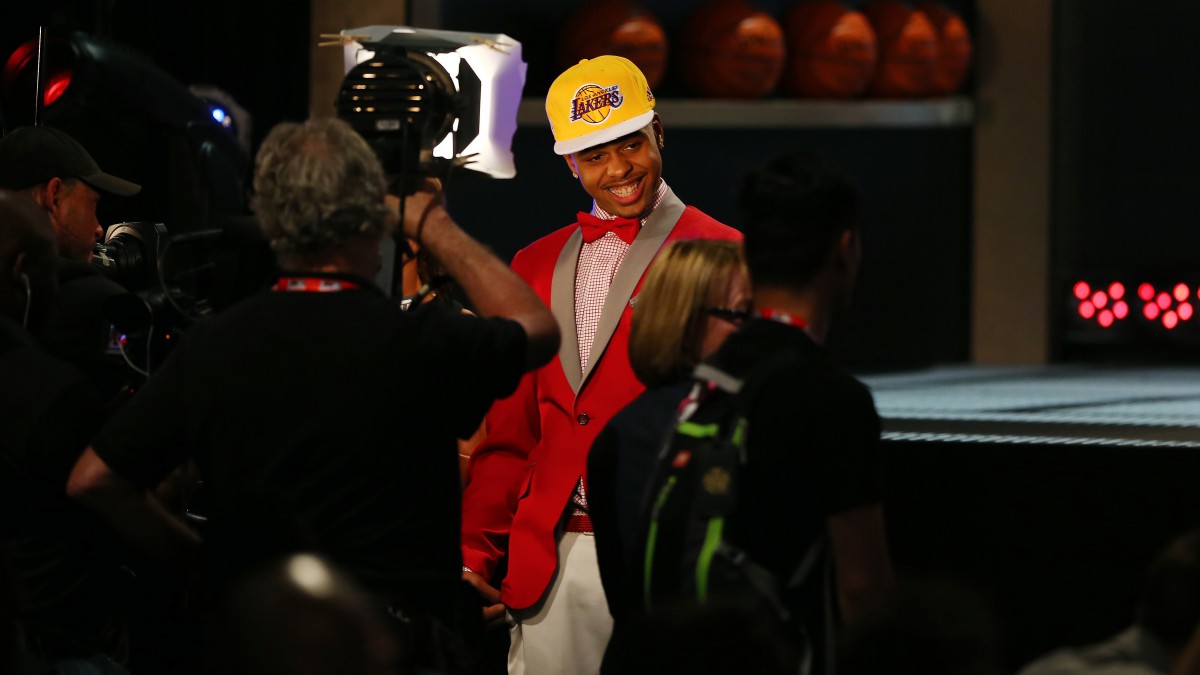 D’Angelo Russell went second to the Lakers. He wore a soft, bright jacket — in Buckeye red, we were assured — with gray lapels, with a red checked shirt and red tie and gray pocket square. It was … cute, in a school-picture-day sort of way. He wore it all with creamy off-white pants that hopefully will go straight to charity. Jahlil Okafor, selected third overall by the 76ers, sported a red tuxedo blazer (apparently tomatoes are in season early). It had a black shawl collar that ran upside down. If this thing plunged any deeper, Ludacris and Tyrese would be parachuting cars into it. His hair was bigger and curlier than even Towns’s. 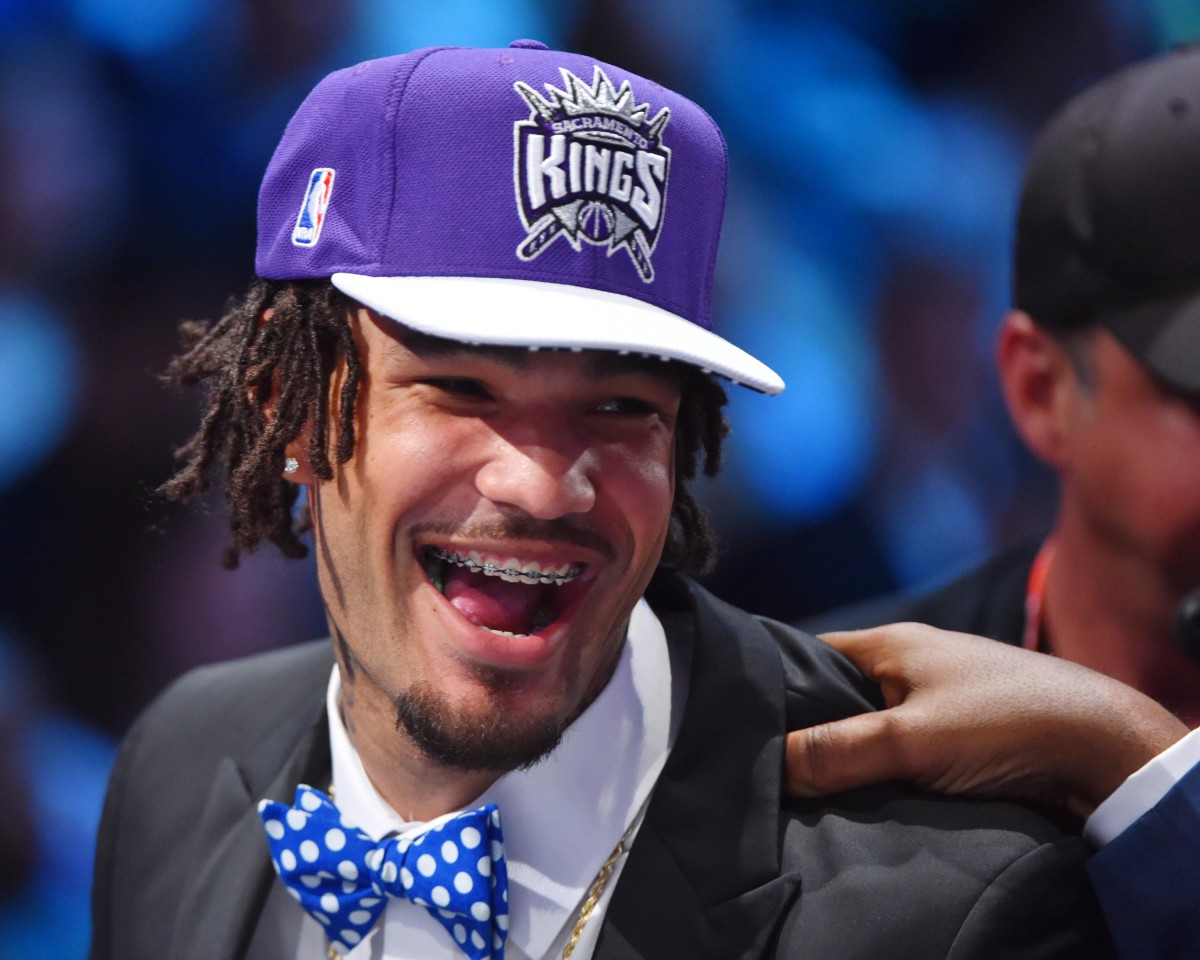 For the sixth slot, the Kings took Willie Cauley-Stein, he of the neck tattoos, off-brand deadlock bob, braces, and 7-foot-3 wingspan. To shake Silver’s hand, Cauley-Stein wore a basic black suit with a white shirt and a blue bow tie with white polka dots. Something possessed him to top it off with a gold chain that held a glittering peace sign medallion — perhaps an attempt to keep the peanut gallery from declaring war on his style. The network coverage eventually coughed up Moziah Bridges, the 13-year-old bespectacled bowtie entrepreneur (and Shark Tank veteran), as a “fashion analyst.” He used the spotlight, in part, to praise more of his own neckwear, particularly on Cauley-Stein. It was a moment of exemplary right-thinking (who wouldn’t love a teenage small-business owner from Memphis?) that hit a wall of corrupt positivity. This kid looked at that entire outfit, and all he had to say was that he liked the bow tie? 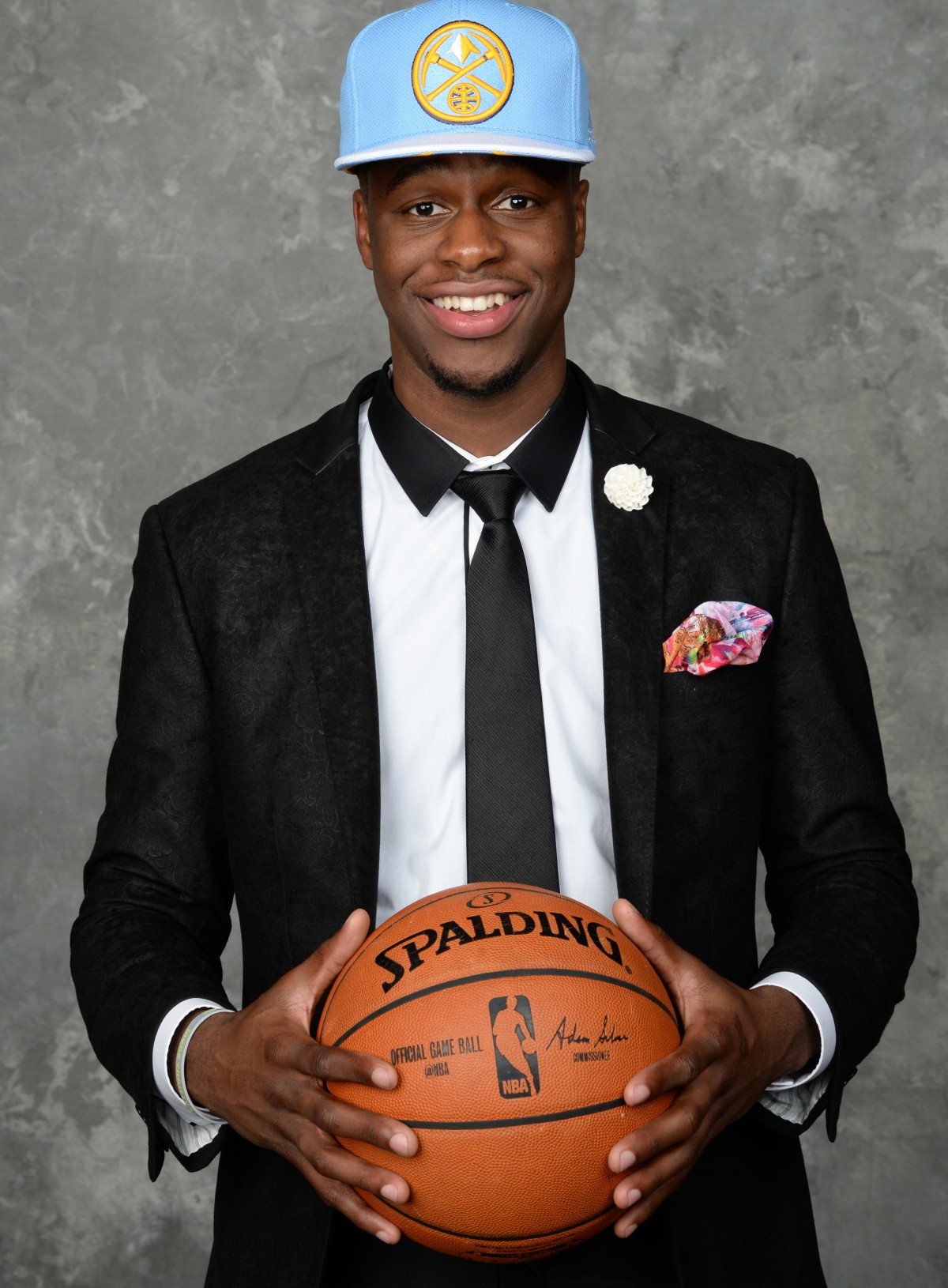 For Emmanuel Mudiay, who went seventh to the Nuggets, it was almost too much look. Almost. There was even more leather collaring on the lapel. The black jacket he wore, with black pants, appeared to be made of damp cat. Plus, there was something floral stuffed in the jacket’s pocket. But you know what? There wasn’t a better-tailored outfit all night. The pants hit the ankles perfectly, and that jacket didn’t billow or sit too high on his rump. If there was an inch of wasted fabric, I couldn’t see it. Plus he topped it all off with spectacular heeled shoes that suggested he was off to see the Wiz. 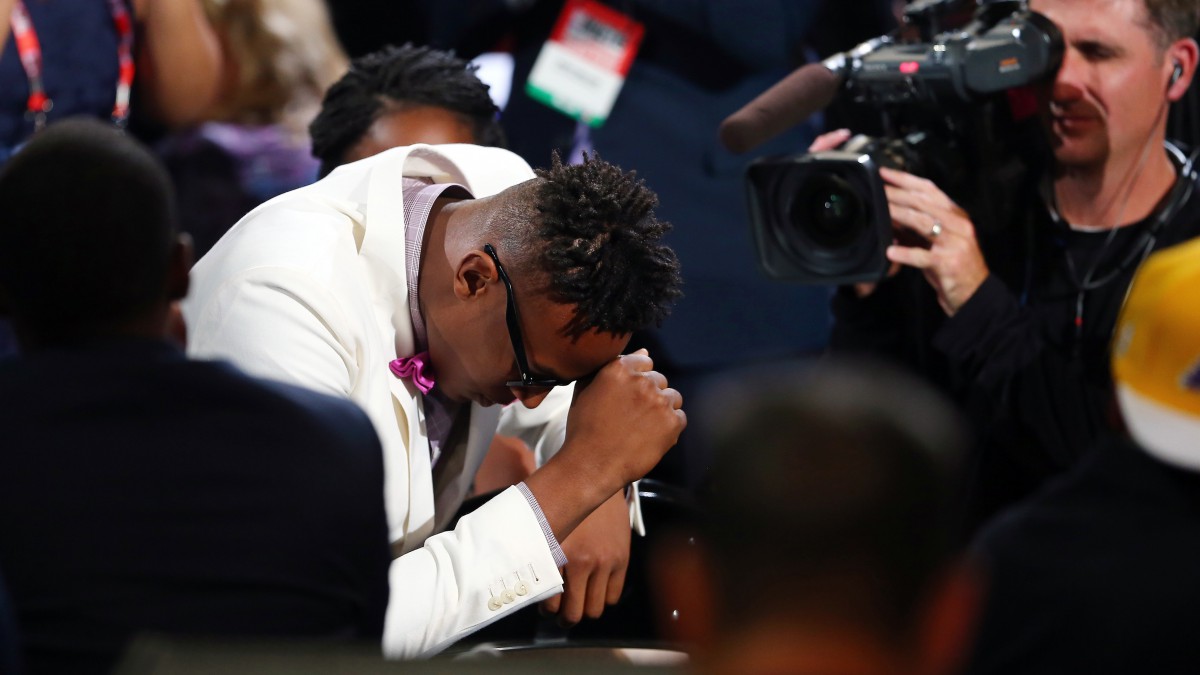 Myles Turner (11th, Pacers) didn’t do badly. Sure, his low-braided high-and-tight haircut was off-trend — and off–Tony! Toni! Toné!, too — but the creamy white jacket over 50 shades of purple worked. Kelly Oubre Jr. went for sheen with a Beaujolais-burgundy suit, a wide, knotty mohawk, and spiked loafers that upstaged everything else. Trey Lyles (12th, Jazz) is what you pray not to see too much of: a gray suit with a crooked maroon clip-on tie. Looked at charitably, the draft can be a kind of commencement. But none of the clothes should make you wish the players were accepting contracts in robes. Presumably, the stretch limo will be depositing Turner, Oubre, Lyles, and their dates at Buffalo Wild Wings for after-prom chow. 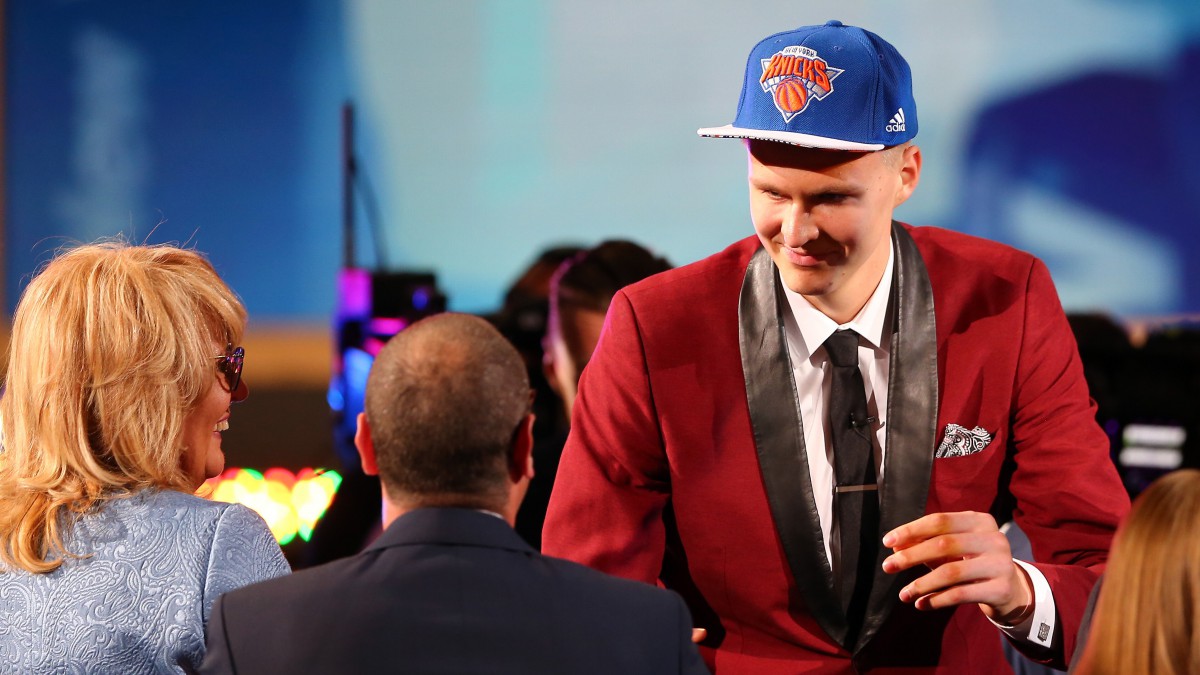 Maybe Kristaps Porzingis will be there to join them. Porzingis is a walking pipe cleaner from Latvia. He wore what can only be described as counterfeit Okafor. He topped his look with a black, skinny, leatherish tie, complete with an unnecessary tie clip. I’ll be kind, because he probably needs kindness right now: Porzingis went fourth to the Knicks, and the announcement drew the sort of jeers typically reserved for professional wrestling villains. One kid in the stands became a thing last night, wearing a jersey in Knicks orange and complementary blue glasses, struggling to steady a cameraphone through his teary devastation. I’d considered going over the top about Porzingis’s suit, with its vaguely sagging crotch. But I’ll get over it. New York, it seems, will not. 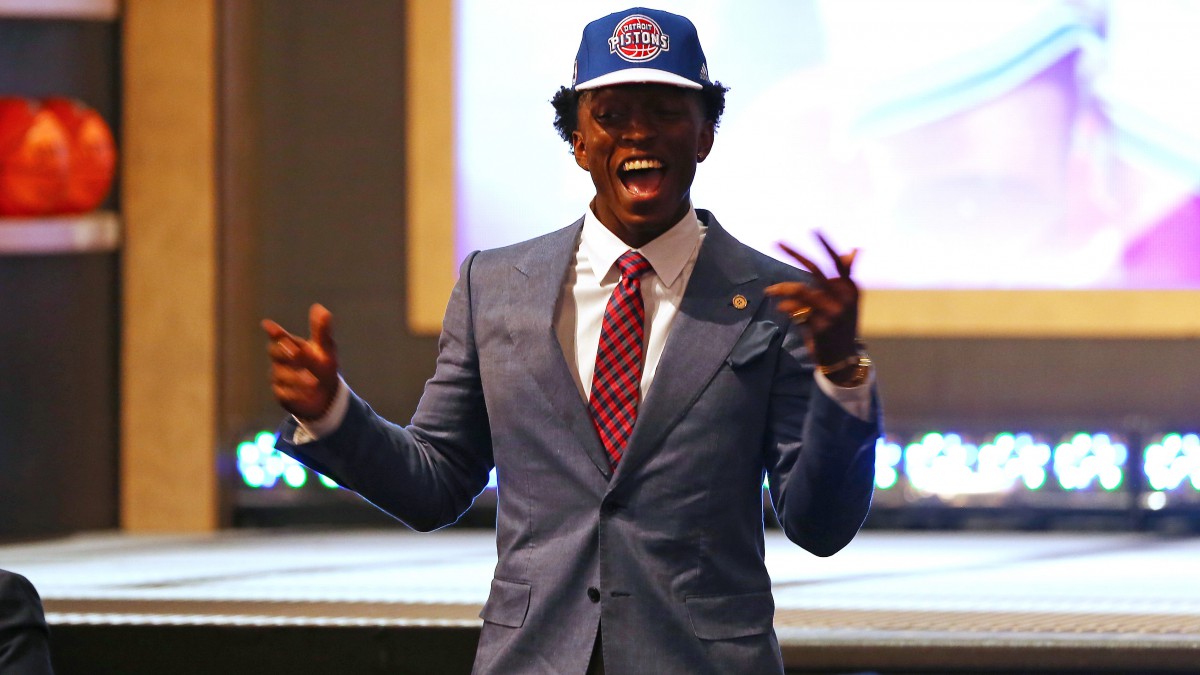 More typical of previous years was Stanley Johnson (eighth, Pistons), who wore a light-blue linen jacket, khakis, and a gated tie with a pocket square that, after all the hugging he did following his selection, seemed to have keeled over. That color scheme extended to Justise Winslow (10th, Heat), who came up with something seasonal — a flatteringly cut aquatic blue suit, with complementary shirt and skinny knit tie — and Sam Dekker (18th, Rockets), who wore windowpane blue and the same lilac seemingly mandated for most of the ESPN on-air crew. 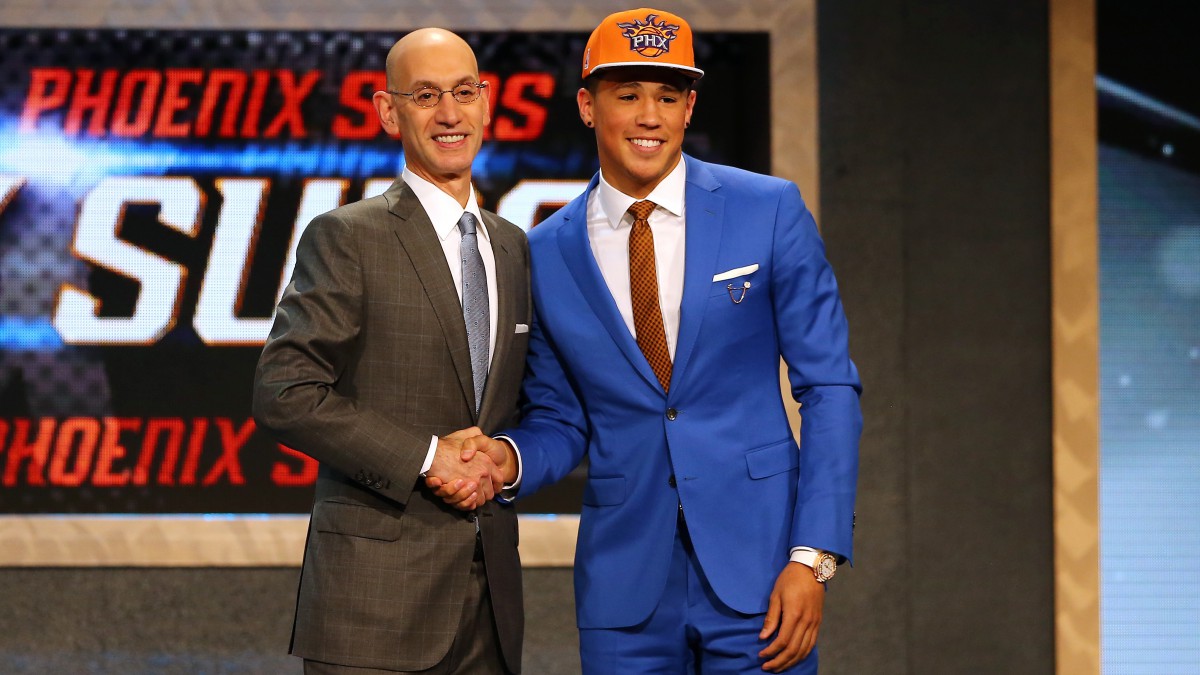 Who’s the guy who left One Direction? Can’t Devin Booker (13th, Suns) replace him? Booker looks he just leaped off of a baking sheet. Last night, he wore a suit in popsicle blue over a crisp white shirt, the only pocket square of note from the night (barely visible, in white), and a thin, dark yellow plaid tie that from certain angles achieved the low threat level of jungle-print lite. Cameron Payne (14th, Thunder) was equally dapper, if not as edible-looking. He wore a pettable double-breasted baby blue jacket (in crepe? Linen? Smurf? Who can say?) over a checked white shirt and pinned collar and a pair of tight white pants. He outdid the rest of the field for pure yachtness.

The person to feel bad for in all of this is Frank Kaminsky III, who went ninth to the Hornets. For weeks, he’s been roundly mocked for his promotional tweets (from the account @FSKPart3) about his JCPenney sponsorship. On draft night, ESPN’s crew caught someone asking him whether his suit — in the same executive gray as Silver’s — was also JCPenney. The reply was a meek, rueful “yes.” Indeed, he was dressed for long hours in the shoe department. Alongside the many stabs at luxury and glamour and boyish sexiness, Kaminsky seemed out of place, out of touch, and utterly conventional. But Kaminsky’s very averageness speaks to the dreams of the average American man. We at home hope for a show, but millions of men hope to put on a suit and go utterly unnoticed. Frank Kaminsky should be their superhero: Today’s Invisible Man.