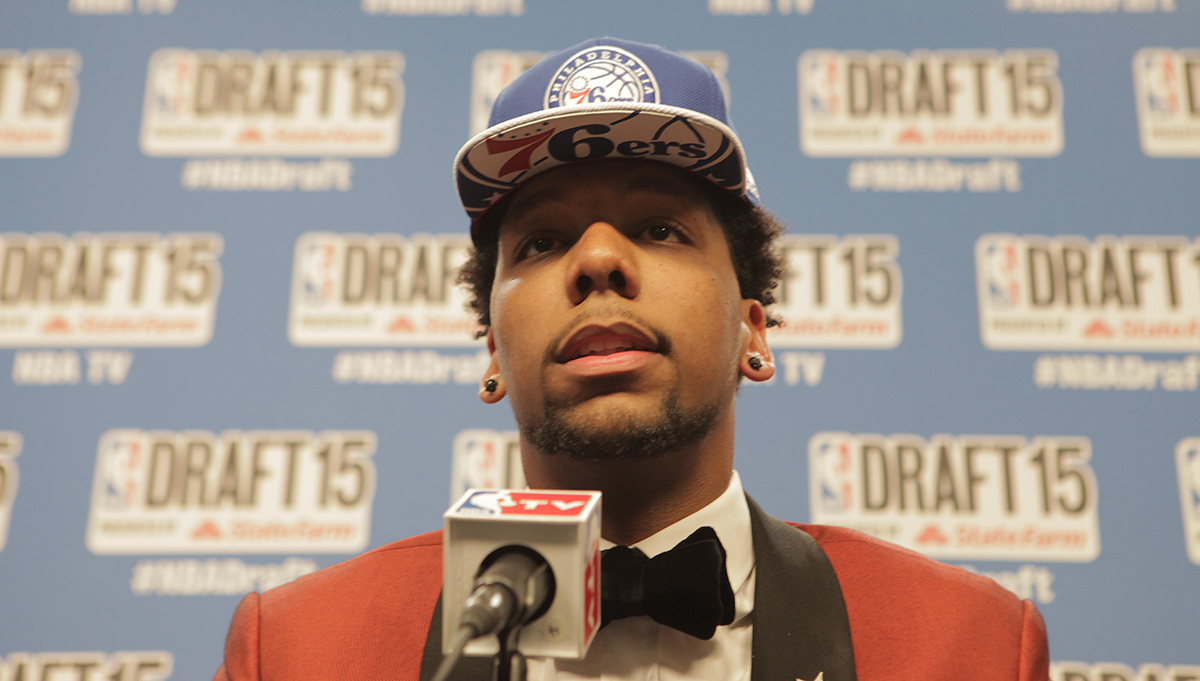 A man walks into the Fourth Ave Pub, only a few blocks away from Barclays Center, in a black Matt Geiger Sixers jersey. I don’t know what it is about Matt Geiger jerseys, but they seem to have this effect on people: They extract a kind of giddy, childlike wonderment, like when two kindergartners discover they like the same kind of cereal. Or at least that’s the effect it has on me and three other bar patrons. I don’t know. This is the first time any of us has ever seen a Matt Geiger jersey in person.

The man in the jersey is Pete. He traveled all the way from Hershey, Pennsylvania, to watch his Sixers take the next step in their X-year plan. I ask him how he’d feel if Philly drafted Kristaps Porzingis, a classic Sam Hinkie move if there were one. He’d be OK with it, but admits that he’d be “fucking terrified.” Pete wants D’Angelo Russell or Jahlil Okafor.

“You know, Matt Geiger’s son is in ninth grade right now,” Pete says. “If we can hold on for four years … ”

I laugh, and I feel nerdy for it. It’s #TrustTheProcess humor. Sixers GM Sam Hinkie’s personal army of supporters may appear cultish, but at least they’re self-aware.

His friend Darin has a shirt with the words “DENVER NUGGETS 2011 NBA CHAMPIONS” and the ’90s Milwaukee Bucks logo beneath. On the back, it reads “BIRD” with 33 printed below. It’s easily one of the most ridiculous shirts I’ve ever seen. Darin made it himself. These guys know how to come to a bar with a conversation starter. There’s more than an hour before the start of the draft. I’m headed off to a place where lifelong dreams come true, and where journalists and family members of greenroom invitees share a power strip to charge their dying smartphones.

I walk up to the Barclays Center main entrance alongside a kid wearing Celtics pajamas, a Larry Bird shirsey, and a plush basketball-shaped helmet on his head. There is a cluster of Sixers fans near the front entrance leading a LET’S GO SIXERS chant. The first of many. I try to hold back my smile from this Celtics fan next to me, but I can’t. I think back to something Pete said to me only a few minutes earlier.

“The best thing about Hinkie is he makes draft night fun.” 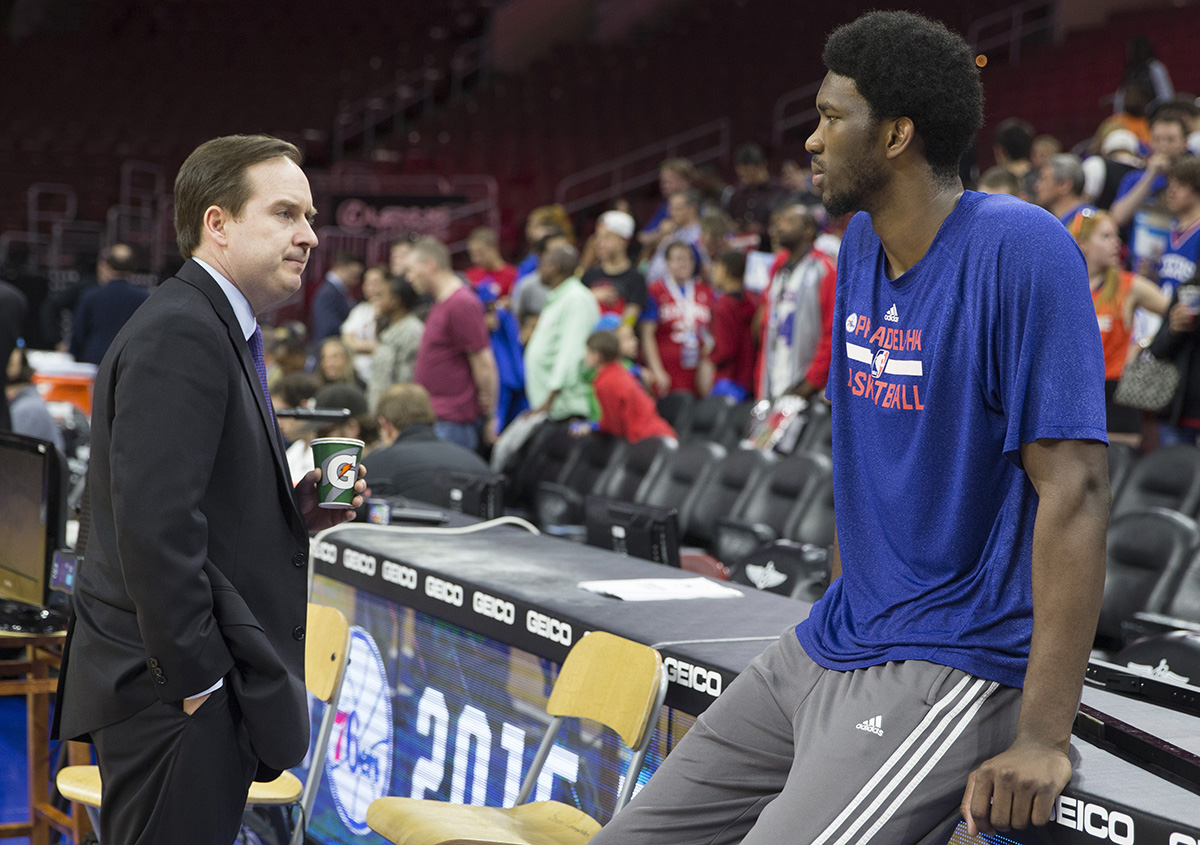 Hinkie hasn’t just been a broker at the NBA draft, he’s been a leviathan, with tentacles reaching every part of the league. For years, the draft has been his playground. With the transactions he’s made, he’s swindled teams, perplexed fan bases, and shocked the world. He’s set the agenda for the past couple of drafts, making moves that seemingly run contrary to what it means to be a corporate franchise. But with time, Hinkie’s rabid noncomformity has become normative. It isn’t a matter of what Hinkie is going to do to shock us, it’s when.

But after selecting top-flight prospects with injuries that would keep them out of their first seasons in two consecutive drafts and picking a stashed European prospect in the lottery last year, maybe the most Hinkie thing Hinkie could’ve done this year was draft Duke’s Jahlil Okafor. It was a perfectly vanilla pick for a perfectly healthy and perfectly recognizable quantity. It was Hinkie adhering to the Best Player Available golden rule. In other words, he was still doing what he does, but for the first time in his tenure, it didn’t feel proactive. It felt like a resigned shrug.

The gamesmanship of pre-draft smokescreening is communal. However, the process of drafting a player is exclusionary. Teams can (or at least should) be concerned only with their own prospects for the future. But when the Lakers drafted D’Angelo Russell with the no. 2 pick instead of making the widely presumed selection of Okafor, it felt like both a progressive move for the Lakers and a middle finger to Hinkie Enterprises. Same goes for Kristaps Porzingis to the Knicks at no. 4 and Mario Hezonja to the Magic one pick later. What does it say when the Sixers may have made the safest pick in the top five?

Reports came out immediately after their pick that the Sixers intended to keep Okafor, which, OK, fine. But there was a palpable tension. Hinkie’s got something in the works. We’re getting to the end of the lottery, for god’s sake.

Just as the Thunder selected Cameron Payne as the final lottery selection with the no. 14 pick, John Calipari collected his pile of team hats and made one last round to the four different tables where his young grasshoppers, Karl-Anthony Towns, Willie Cauley-Stein, Trey Lyles, and Devin Booker, sat.

“Where are you going?” someone at Lyles’s table asked the Kentucky coach.

With that, Calipari exited stage left, pleased to have done business as usual.

There was 4:21 left on the Atlanta Hawks’ clock for the no. 15 pick. Still, nothing from Hinkie.

A second lottery’s worth of picks later, Kevon Looney and his family left their greenroom table, disappointed after the 27th pick was announced. But the Looney family returned once it was made known that the Warriors would take him with the 30th pick.

By then it was clear: Hinkie had gone dormant. An entire round in the books, and no word of any movement from the Sixers. Quoth one Kanye song: 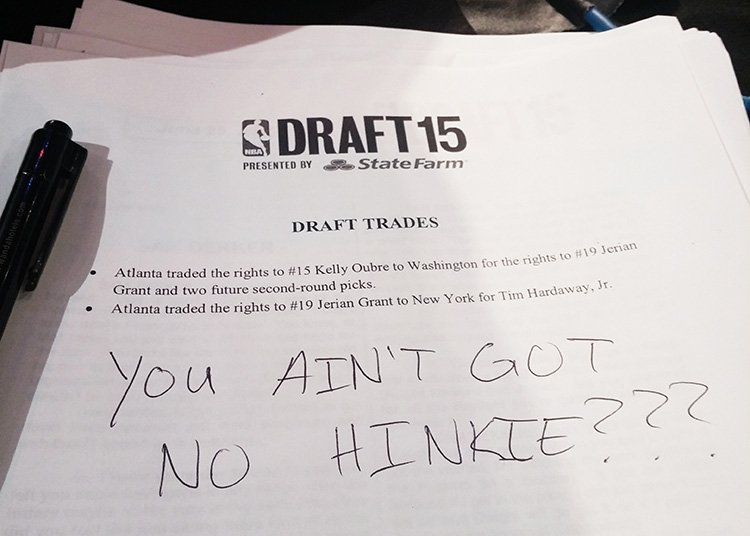 It’s hard to stay on the ideological cutting edge. What if the other teams, the teams that Hinkie used as punching bags in asset accumulation, have finally smartened up? What if they’ve caught up?

The idea of trusting a process is easier to accept when there is consistent motion — at the very least, it’s something that resembles forward progress when the team’s reality doesn’t always paint the same picture. The Sixers’ only trade of the night was with the Knicks: the 35th pick, Willy Hernangomez (Porzingis’s teammate at Sevilla), for two future second-rounders. That’s it. Trusting the process means acknowledging that nights like these will happen. But Hinkie is the analytical gunslinger and the draft his Wild West. If we can’t get a bonkers ride out of Philly’s most important night of the year, even Sixers fans might have to ask: Is this worth it?