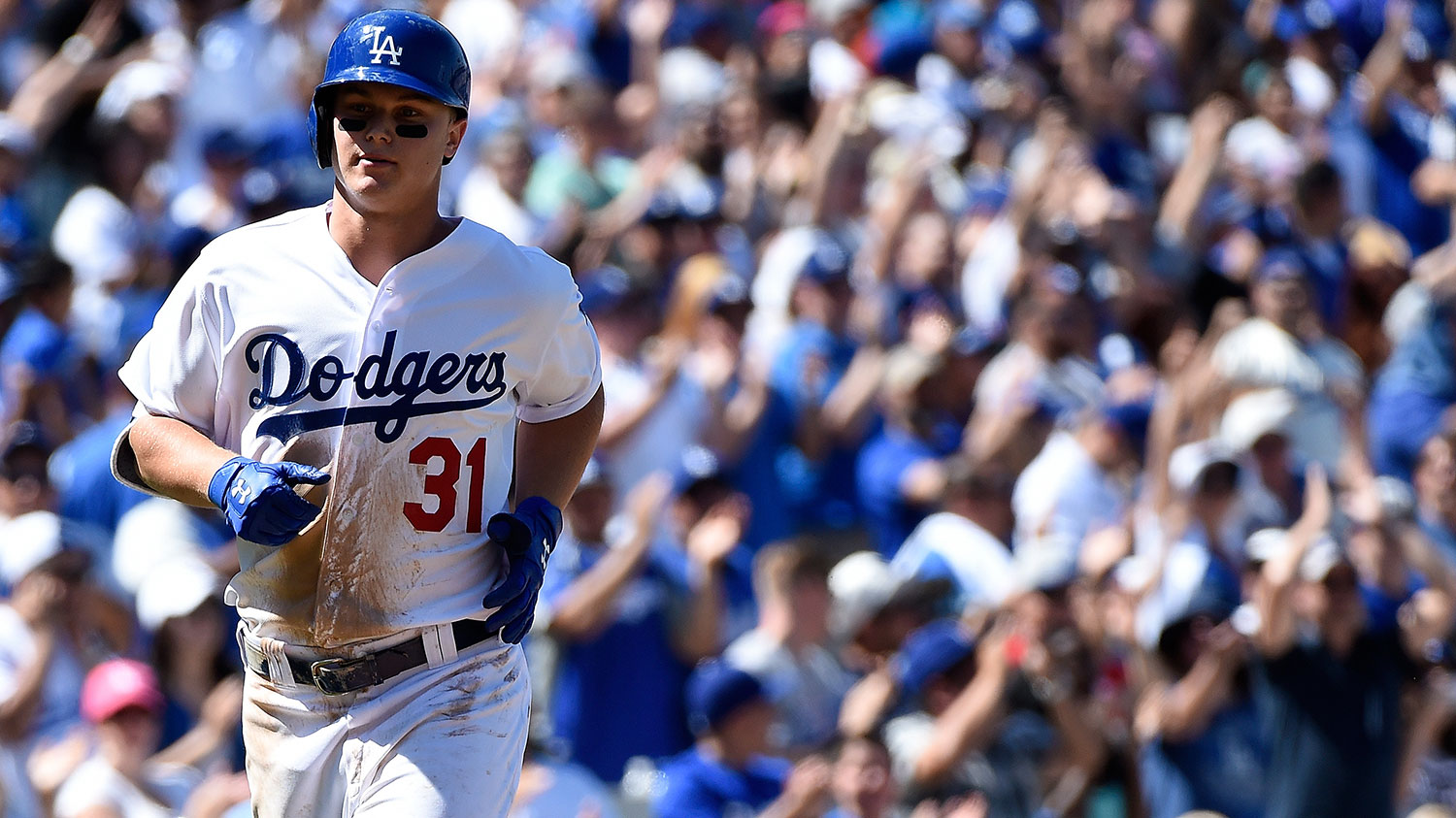 It’s tough to find one defining moment from Joc Pederson’s amazing rookie season. In just 26 games, the 23-year-old Dodgers center fielder has built a dazzling highlight reel filled with long home runs and spectacular catches, while also putting up mind-boggling numbers. But to fully appreciate the Joc Pederson Experience, we probably need to start with Friday night’s game against the Diamondbacks.

With the bases full, Pederson strode to the plate with one out in the bottom of the second inning. As the public-address announcer introduced no. 31, a familiar pop staple rang out over Dodger Stadium’s speakers.

A hip-hop fan whose Twitter handle makes his listening preferences clear, Pederson paused once he noticed the music selection for this pivotal at-bat. Realizing his teammates had pranked him, he looked back at the dugout, laughed, then took his usual left-handed stance at the plate. The first pitch from D-Backs starter Rubby De La Rosa was a changeup right down Broadway, and Yung Joc obliterated it.

As Pederson bounced into the dugout, Vin Scully offered the perfect description of L.A.’s star rookie: “Very popular, somewhat shy … and what a wonderful asset.”

Many Dodgers fans weren’t sure what to make of the team’s offseason makeover. In trading popular outfielder Matt Kemp to the Padres and allowing shortstop Hanley Ramirez to leave via free agency, GM Farhan Zaidi & Co. were letting two of the best offensive players leave a team that had just won 94 games and its second straight NL West crown. There were whispers about payroll flexibility and smarter spending — odd talk for a team with more money than some Pacific island nations.

Unloading and avoiding lucrative long-term contracts for over-30 players certainly factored into management’s decisions over the winter, but the Dodgers believed they could get better right away while also getting cheaper. Ramirez was a defensive liability who caused problems for Clayton Kershaw, the all-world lefty starter who prompted opposing managers to stack their lineups with right-handed hitters, who’d inevitably pull a bunch of balls to short and then watch disaster strike. Kemp engendered an even bigger defensive quandary: Once an everyday center fielder, injuries and age had forced him to a corner outfield spot, leaving the Dodgers with no choice but to roll with non–center fielders Andre Ethier or Yasiel Puig in that crucial position. That misalignment made the team’s center fielders 17 runs worse than average last season, the second-worst mark for any National League club, according to Baseball Info Solutions’ Defensive Runs Saved metric. In replacing Ramirez with a better gloveman, the Dodgers figured they could improve at short. And in sending Kemp out of town, they hoped to do the same with an in-house solution: Pederson.

While we’ve seen mixed results at short so far,1 there’s been no such ambiguity in center field. Kemp, who’s batting .297/.336/.423, has been a useful addition for the Padres, but Pederson has emerged as one of the best all-around players in the league through four-plus weeks. We see it with his glove: He’s saved two more runs than the average center fielder and helped the Dodgers to the fourth-best team defensive rating in the NL per BIS:

And we see it even more clearly with his bat: Pederson has been one of the best hitters in the majors, ranking among the league leaders in on-base percentage and slugging with a .260/.420/.597 line. He’s tearing the cover off the ball too. According to Baseball Savant, Pederson, with an exit velocity off the bat better than 97 mph, is hitting the ball harder than any other player in the major leagues.

What’s more, Pederson has become a master of the three true outcomes, so named because a walk, a home run, or a strikeout are the only plays in a baseball game unaffected by the players in the field.

Strikeouts are obviously the worst of those three outcomes, and Pederson has seen plenty of them, whiffing 11 of his past 20 times at bat, and 33 times overall. He’s fanned on 32.7 percent of his plate appearances this year, the eighth-highest mark in the majors and the second highest in the National League. That’s an ugly number for any hitter, but considering that the Dodgers moved him from eighth in the order to the top spot a week ago, it looks even worse.

To cancel out the strikeouts, Pederson has been on a homer binge lately, cranking five in his past eight games to give him seven on the year. That’s tied for the third-highest total in the National League, and works out to a 6.9 percent home run rate — another atypical number for a leadoff hitter.

Still, why push such a whiff-happy slugger to the leadoff spot? Pederson has also been a walks machine; in his first 101 times up, he’s walked 21 times. Only Bryce Harper and Carlos Santana have walked more frequently, and both Harper and Pederson are on pace in this young season to top Frank Thomas for the highest walk rate of any 23-or-younger batter since 1950.

In fact, between homering, walking, and striking out, Pederson isn’t doing much else when he gets to the plate. Historically, the players who’ve recorded the highest TTO percentage have been intimidating big swingers like Mark McGwire, Adam Dunn, or Ryan Howard. But Pederson has recorded a homer, strikeout, or walk an astounding 60.4 percent of the time. Granted, 26 games is still a small sample, but Pederson is currently on pace to set the single-season record for the three true outcomes.

For now, the Dodgers have one of the most unorthodox — yet effective — leadoff men in the majors. And wherever he ends up in the order, it also looks like they’ll have one of the most electric players in the league for years to come. Following in the footsteps of Sandy Koufax and Shawn Green, Pederson is a deserving piece in the lineage of great Dodger boychicks. And for a veteran-laden team that sorely needed an injection of power and defense, he’s been a breath of fresh air.