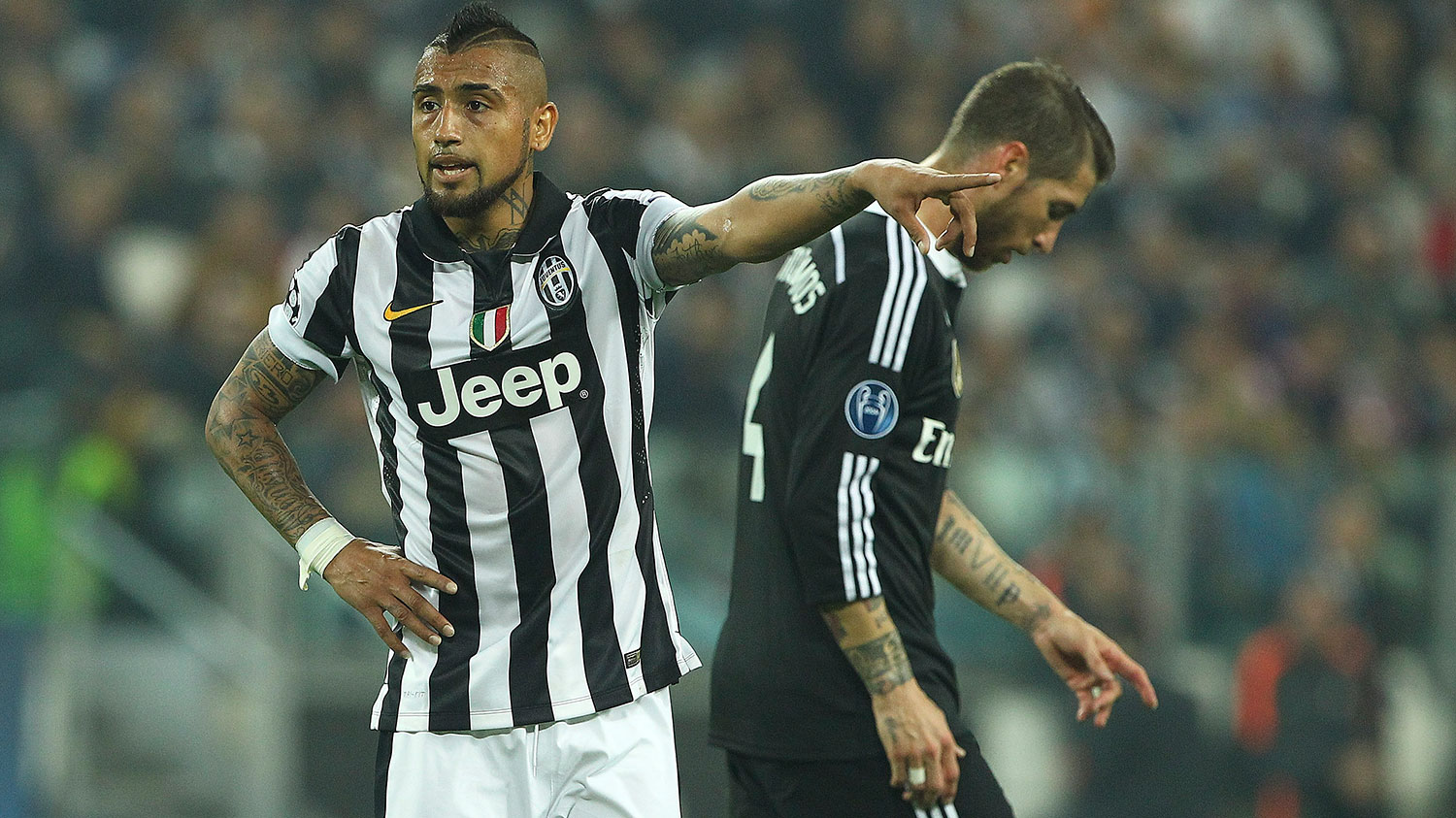 Ryan O’Hanlon: Here’s my main observation from the Juventus–Real Madrid game: Arturo Vidal is not human.

Now for an embarrassing admission: I forgot how omnipotent this dude is when he’s given room to run. How it seems like he’s playing five different positions at once — and how, when he’s at full force, he actually is. Nominally a “central midfielder” for Juventus, Vidal wasn’t only the best player on the field; he was also the best winger, the best defender, and the best playmaker during the 2-1 win over Madrid.

Now, it seems like we’re at a point in all the major team sports — soccer, football, basketball, and hockey — where the top clubs are the ones that use space most efficiently, but do you really wanna know the best way do that? Put Vidal out there and tell him to go get the ball.

So, as the reconciliation process requires, I now must undergo a phase of self-examination: Why did I underestimate Vidal? Is it because he’s been hurt since the World Cup? Or is it because he plays with Paul Pogba — and even titans can’t help but be overshadowed by an asteroid?

Mike L. Goodman: The thing about being good at everything is that sometimes it means doing less than you’re capable of.

When Pogba is on the field, blowing things up, Vidal has a much more subtle role, because, as scary as this is to suggest, Pogba might be even better at being everywhere. So Vidal’s job is to react to his teammate and make sure that Pogba’s license to roam doesn’t hurt the rest of the team. But without Pogba, it’s Vidal’s turn to dominate.

Yesterday, according to formation diagrams, Vidal was the farthest forward of Juve’s narrow four-man midfield, but in reality he just went wherever the heck he wanted, blowing holes in Real Madrid left and right. So don’t feel bad. You weren’t the only one who forgot about what Vidal can do. Apparently, whoever’s in charge of Madrid’s game-planning also came up blank.

Arturo Vidal led Juventus with 82 touches vs Real Madrid. He was everywhere. pic.twitter.com/NsJdQFryb2

O’Hanlon: I think that’s part of what made his performance so shocking. Real Madrid, what with Sergio Ramos, Pepe, Cristiano Ronaldo, Toni Kroos, Gareth Bale, and James Rodríguez, are the ones we normally see doing the bullying. They lose games because they get out-finessed or caught too far upfield and are punished by counterattacks; they never lose because the other team is bigger, faster, and stronger. But of course, Vidal was all of those things and more yesterday. So is this just an especially bad matchup for Madrid? Could it be twice as bad if Pogba returns next week? Or were the defending champs simply ill-prepared to deal with Hurricane Arturo?

Goodman: At the very least, Madrid should be equipped to deal with it better than they did Tuesday. But Carlo Ancelotti seems like he’s caught between two realistic options.

On the one hand, you can just attack with all of those weapons, shrug, and say, “We’re Real Madrid, we have Cristiano Ronaldo, we go to 11, and you don’t.” If that means you have to beat them 6-3, then you beat them 6-3. Vidal goes nuts like he did yesterday or Pogba controls a game, but it ultimately doesn’t matter.

The other option is for Madrid to just play fewer attacking players, trot out a couple of the (still very good) defensive-oriented guys, and play more conservatively. With that approach, you focus on making sure Vidal and Pogba don’t have the time and/or space to do the kind of damage they’re capable of.

Yesterday, Ancelotti was stuck in between, and he ended up with the worst of both worlds. He had Ramos, a defender, in the midfield, but the team was still set up to play in the relentlessly attacking way they always do. With no Karim Benzema up top, everybody basically bumped up a spot, with Bale taking Benzema’s place, Rodríguez taking Bale’s spot, and Isco taking Rodríguez’s. But when you try to play an open and offensive style with Ramos in your midfield, you’re both making sure that your attack sputters and also leaving more than enough open space for Vidal to go ham.

I think Ancelotti will learn his lesson from the first leg, but then again, I thought he would have known all of this going in. 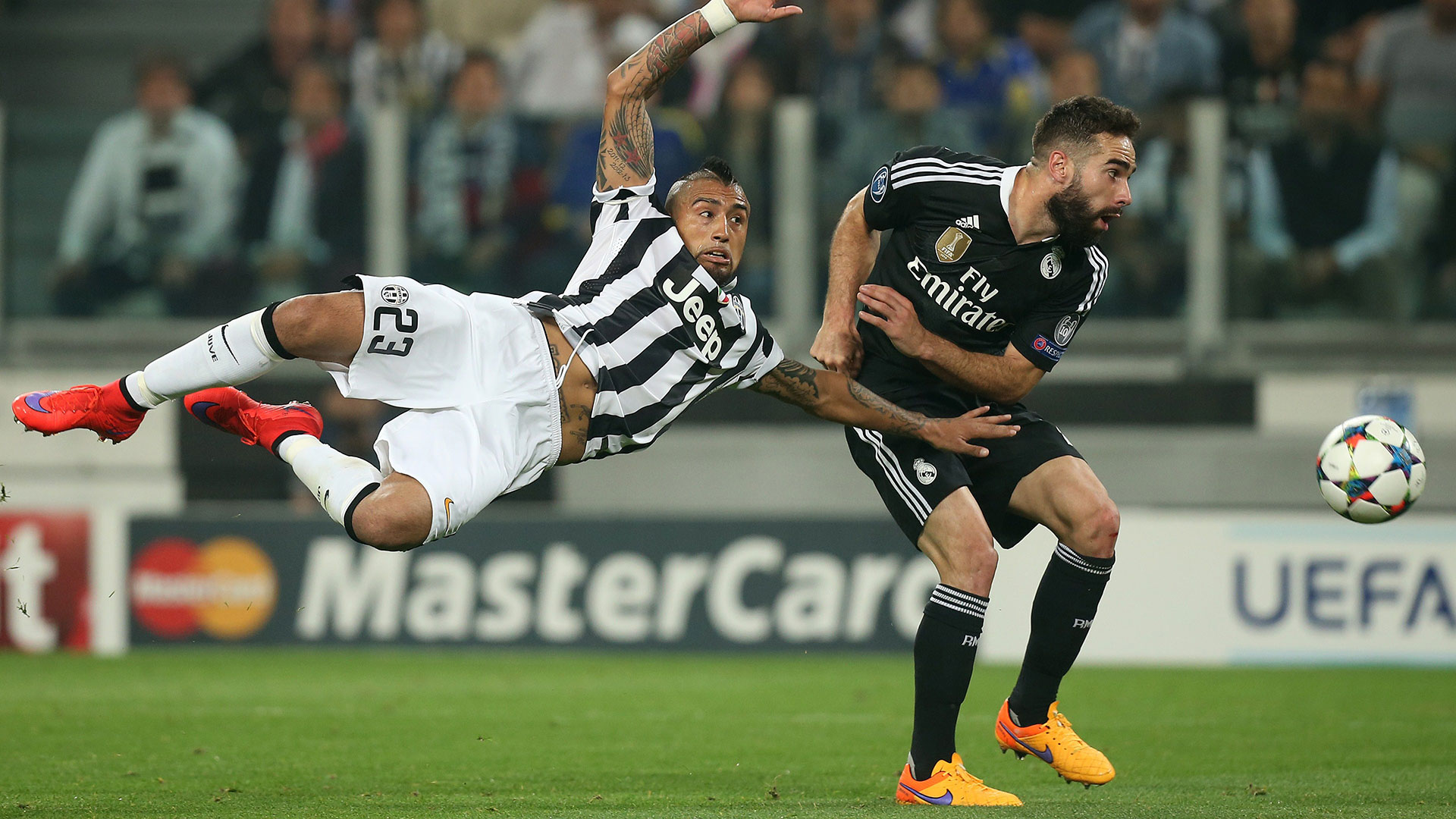 O’Hanlon: To bring us back to the beginning: Even if you don’t give Vidal any room, he’s still good enough to create space for himself. But give him an inch, and he turns it into the Lincoln Tunnel.

Still, I wonder if it’s even possible for Real to shut down Vidal and (possibly) Pogba without fatally handicapping what they do best: attacking your face off. So, considering that Ramos seemed particularly overwhelmed yesterday, I hope Ancelotti chooses door no. 1 and just tries to go toe-to-toe back in Madrid. After yesterday, opting to let Vidal and Pogba run free against a midfield of Kroos, Rodríguez, and Isco must be a frightening proposition. But when you have those three, plus Ronaldo and Bale, isn’t the only real option to run it right back at them? It feels like that approach would give them the best shot at a comeback, but more important, it’s the game I want to watch.

Goodman: If I had any confidence in Madrid’s ability to defend, I’d disagree with you. All they need is an angry, José Mourinho–style 1-0 win. But I don’t think they can actually go out there and scrap for a victory like that. You are what you are, and for Madrid, that has absolutely nothing to do with defending. So, go win 6-3, you crazy kids — or at least crash out trying. Because even if it fails, you can just fire Ancelotti, sell Bale, and nothing will ever be wrong again, right?

NHL Playoffs Report: Where the Wild Things Are (It’s Not Pretty) and How the Flames Roasted the Ducks