Going to the Mat: The Dodgers Boost Their Rotation With Latos While the Marlins Shed Payroll 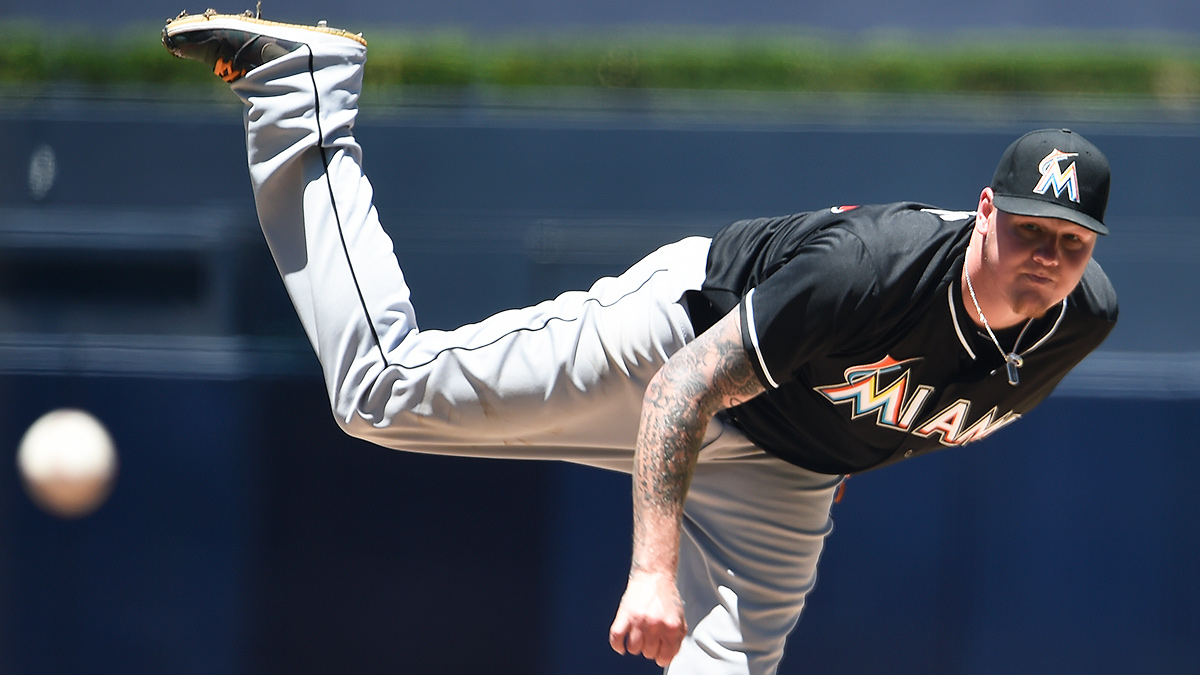 Note: Shortly after we published this article on Wednesday, this straightforward salary dump reportedly turned into a monster deal that involved three teams and 13 players, plus the Marlins’ draft pick, which ended up going to Atlanta. Most of the new players in the deal won’taffect this year’s pennant race, though it’s worth noting that starting pitcher Alex Wood, despite his own injury concerns and a drop in strikeout rate from last year’s breakout season, is another big addition to the Dodgers’ rotation depth for the rest of the season.

The Los Angeles Dodgers reportedly landed two of the literally biggest trade assets on the market Wednesday, snatching starting pitcher Mat Latos and first baseman Mike Morse, as well as a competitive-balance draft pick, from the Miami Marlins. While reports have already surfaced that the Dodgers could quickly flip Morse to a third team, this deal is only really about one thing: Andrew Friedman’s club bolstering its pitching with a solid arm.

The ideal form of Latos would be a huge boost to the Dodgers’ rotation. The issue is that the ideal form of Latos, a 200-inning workhorse who produces like a no. 2 or 3 starter, hasn’t been seen since 2013. He was hurt his last year in Cincinnati, and since moving to Miami, he’s seen his velocity fall off a little and his ERA shoot up by more than a run, despite peripherals that have remained more or less the same. He’s still a nice pickup at the deadline, but two years ago we’d have been talking about Latos, who’s still somehow only 27 years old, in the same breath as Jeff Samardzija in terms of free agents to be.

It seems odd to say that the Dodgers, who have, at worst, two of the three best pitchers in the National League, are in dire need of rotation depth, but with Hyun-Jin Ryu and Brandon McCarthy out for the season and Brett Anderson pitching through an Achilles injury, they are. So even though Latos has fallen off a bit, this is a good trade for L.A. insofar as it reduces the probability of Mike Bolsinger starting a game in the World Series. A team can hand a playoff start to a 27-year-old who’s having his first run of real success, but one of the nice things about being grotesquely wealthy is that the Dodgers don’t have to ride that particular bolt of lightning if they don’t want to.

If Latos, who’s posted a 2.08 ERA in his last four starts and has a 3.34 FIP on the season (compared to a 4.48 ERA), bounces back to his peripherals, he’ll be a clear upgrade over Bolsinger. And even if he doesn’t, he’ll still be an even clearer upgrade over whoever would take that fourth rotation spot should Anderson get too hurt to pitch in the postseason (which isn’t completely unheard of when it comes to Brett Anderson).

The other pieces going to Los Angeles are economic in nature. Morse isn’t the middle-of-the-order bat he was five years ago; in fact, he’s been so bad (.214/.277/.314) for Miami that he might not even have any utility as a bench bat or a potential World Series DH, whether with the Dodgers or the aforementioned mystery third team.

Between Latos and Morse, the Marlins will save somewhere in the neighborhood of $14 million in salary through the end of 2016, plus the extra jet fuel it takes to fly 13 feet and 500 pounds’ worth of ballplayer around the country.

To sweeten the deal for L.A., Miami also tossed in a competitive-balance pick in next year’s draft. The pick will probably end up in the low 40s once the free-agent compensation picks have been doled out, but it’s impossible to know where right now, because baseball’s draft rules are more annoyingly complex and inscrutable than federal tax code. This continues Miami’s tradition of giving away picks in the 30s to avoid paying draft bonuses. (See also: Why Everyone Thinks the Diamondbacks Have No Clue What They’re Doing.)

In addition to a $14 million budget for pinball machines and a water bed in the executive suite at the Taxpayer-Funded Stately Pleasure Dome, the Marlins get back right-handed pitcher Jeff Brigham and two other yet-to-be-named minor league pitchers. In this case, that means that we don’t know who those minor leaguers are yet, rather than them being actual human beings who don’t have names, which is an idea that just made Bill Belichick’s neck hair stand on end. Brigham, a 2014 fourth-round pick out of the University of Washington, has failed to progress past A-ball by age 23, and he hasn’t been conspicuously successful there, so any well wishes for the newest Marlins farmhand must be accompanied with the caveat that he might never be heard from again. As for his nameless compatriots, “minor league pitchers” could mean anything, but it’s extremely unlikely that any of the three in this deal moves the needle significantly.

Which brings us to the final reason this deal works for Los Angeles: There’s still room to improve the starting rotation for the playoffs, particularly in light of how deep Washington and St. Louis can go. So if the Dodgers get a hankering for Cole Hamels or David Price in the next 48 hours, they should still have enough top-level minor league talent to make a deal.