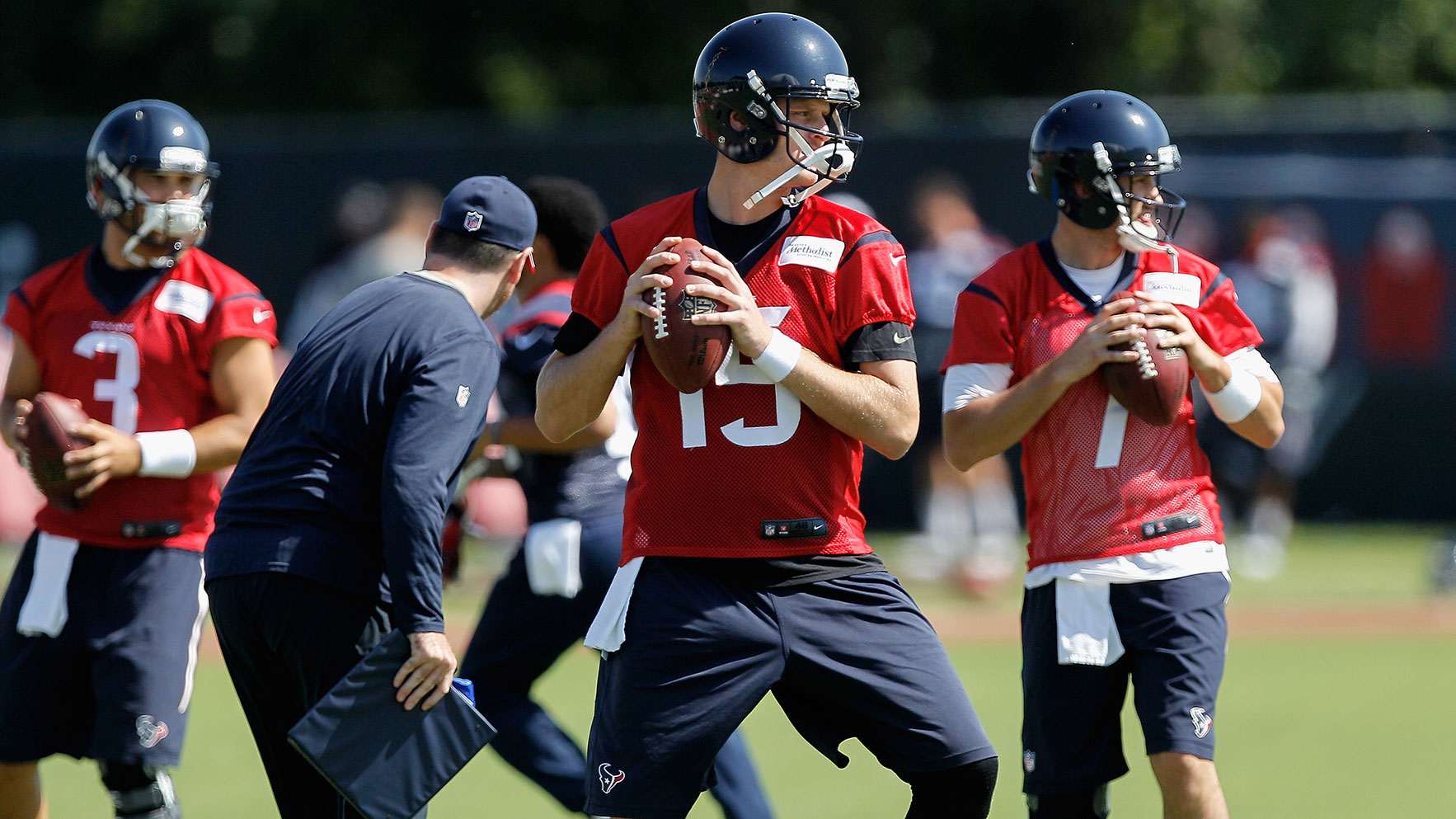 For a handful of NFL teams, training camp has already begun, and come August 2, all 32 will have kicked into full gear. So let’s forget about deflated balls and demolished cell phones and look to what lies ahead. Here are some questions that’ll need answering over the next month.

Who Plays Quarterback for the Bills (and How Well)?

With Rex Ryan in charge, the Bills have become significantly more interesting, and they’re a team with talent across the roster — except behind center. Buffalo managed to win nine games last year with an offense that finished 26th in DVOA, had a couple of the worst offensive linemen in the league, and was forced to scrape together quarterback play from EJ Manuel and Kyle Orton.

It's almost here. For everything you need to know about the new season, follow all of Grantland's coverage.
Aside from quarterback, every part of Buffalo’s team has a chance to be better in 2015. The Bills have added a few potent weapons, and when Cyrus Kouandjio eventually wins the fight to play right tackle, there will be three new starters on the offensive line. Add all that to a defense that finished second in DVOA last year and returns nine starters and things start to get pretty interesting. It all may be for naught, though, if the Bills get torpedoed by bottom-of-the-barrel play under center.

What Buffalo needs at quarterback is a steady hand, someone who can just provide a slightly above-average option. But considering the guys on the roster, even that is difficult to envision. The last time Matt Cassel started for at least half a season, he finished the year with six touchdown passes and 12 interceptions. Manuel has already been sent to the bench once during his two-year career. And Tyrod Taylor is still a major unknown.

The Bills have spent the past couple years building both an identity and a workable roster, but they still haven’t figured out what to do about the most important position in sports.

How Many 49ers Starters Will We Be Able to Name?

With camp opening for veterans on Friday, 49ers fans have run out of time to hope the past six months were just an awful fever dream. Two seasons ago, San Francisco was playing in its third NFC Championship Game in as many seasons. They’ve since fallen from having maybe the most talented roster in the league to one plagued by personnel questions — and what’s most shocking is which positions are suddenly looking like weaknesses. As recently as 2013, the Niners had arguably the best offensive line in football. Now, with Mike Iupati in Arizona and Anthony Davis taking a break, 60 percent of the line has turned over. Ten months ago, San Francisco had the deepest crop of linebackers in the league, and now look at the depth chart. That was fun, right?

At their best and deepest, the 49ers had the luxury of planning for the future when drafting players. Now, the future is, well, now. They’re likely going to need first-round pick Arik Armstead to see a lot of snaps along the defensive line, and the long-term answers on the offensive line — Marcus Martin and Brandon Thomas — are already penciled in as Week 1 starters.

Beyond the youngsters, free-agent signings Torrey Smith and Reggie Bush can potentially add a different element to new offensive coordinator Geep Chryst’s group. But where the Niners need to figure things out is on defense. San Francisco brings back six starters — plus a healthy NaVorro Bowman — from a defense that finished fifth in DVOA, but the names they lost aren’t exactly also-rans.

Patrick Willis and Justin Smith were the heart of the Niners defense for years, and although Willis was slowed by injuries last year, Smith was still an ass-kicking problem for opposing offensive lines. Without either of them — and without defensive coordinator Vic Fangio — this group will look much different than it has in years. San Francisco has hit the reset button in a way that would’ve seemed impossible a year ago.

Speaking of Fangio, he’s got his work cut out for him in Chicago. The Bears finished 28th in defensive DVOA last season and 32nd in weighted DVOA, which puts an emphasis on how teams closed out the season. Put simply, they were awful.

The questions in Chicago won’t just be about the new blood the Bears brought in; they’ll also be about what Fangio does schematically. A full-on transition to Fangio’s version of the 3-4 isn’t likely, considering the Bears had spent the previous decade compiling players that fit into a more traditional 4-3. Instead, it’ll probably be a combination of the two, which could still present an interesting challenge for the more 4-3 oriented players on Chicago’s defense.

I could throw out 10 different defensive-line combinations and I wouldn’t feel confident about any of them. As the best run-stuffing option on the roster, 2015 second-round pick Eddie Goldman and his 336-pound frame will probably fit into most of those groups, but how the edge group of Willie Young, Pernell McPhee, Jared Allen, and Lamarr Houston shakes out is less clear. The good news for Bears fans is that no matter where everyone ends up, it’ll be hard for things to get any worse than the past two seasons.

How Will Atlanta’s Defensive Personnel Shake Out?

The Falcons are making their own scheme shift under new head coach Dan Quinn, but they seem better suited to make it work quickly. There’s a chance that Brooks Reed, Vic Beasley, Adrian Clayborn, Charles Godfrey, and Jalen Collins — all brought in this offseason — will play significant snaps in Week 1.

More specifically, figuring out the front-seven rotation is easily the biggest challenge facing Atlanta in the post–Mike Smith era. At 280 pounds, Clayborn could play a similar role to the one his former teammate Michael Bennett took on for Quinn in Seattle, which would include more snaps on the interior than Clayborn got in Tampa Bay. After spending a lot of his time in Houston as an edge rusher, Reed could be slated for more of a coverage role with the Falcons. The 318-pound Ra’Shede Hageman could destroy the planet in his second season. And I haven’t even brought up the eighth overall pick, Vic Beasley, who’s a great fit for the Leo linebacker role in Quinn’s scheme.

Atlanta finished dead last in defensive DVOA a year ago, but with Quinn in charge — and with all the moves the Falcons have made in the past five months — it’s not that hard to see them turning it around in 2015.

What Will End Up Happening in the Dallas Backfield?

Based on how dominant the Cowboys’ running game was last year, this is an especially interesting one. Off the field, Joseph Randle has done little to help his case — starting with his shopping habits and ending with his “meat on the bone” comments about DeMarco Murray. But on the field, there doesn’t seem to be much of an argument between Randle and Darren McFadden. Randle averaged 6.7 yards per carry last season. Granted, that was on only 51 carries and came via the benefit of playing behind the best offensive line in the league, but that number is tough to ignore. McFadden hasn’t cracked 3.5 yards per carry in a season since 2011, and that year, he played only seven games.

After life with the oft-injured Murray the past few seasons, I can’t imagine Jason Garrett wants to go into the season with a similarly snakebit McFadden as his lead back. Randle has been a headache for the Cowboys, but he’s also produced when given chances in this offense. He should get plenty more of them by season’s end.

Who Wins the QB Derby in Houston?

In the battle for the “If Only We Had a Quarterback” crown, the Texans might just barely edge out the Bills. Houston’s defense doesn’t quite stack up to Buffalo’s, but it still finished sixth in defensive DVOA last year. And there’s reason to think there won’t be much of a drop-off this year. Rahim Moore was an underrated signing to shore up the back end of the defense, and we’ll see what the Texans end up getting from Jadeveon Clowney. Also, having J.J. Watt tends to help.

Where the Texans have the bigger advantage on Buffalo is along the offensive line. For the first time in eight years, Houston will start the season without former center and zone-blocking wizard Chris Myers, who was released in March, but the rest of the Texans’ line is filled with talent. Brandon Brooks is a painfully overlooked and talented guard, and Houston was smart to bring back right takle Derek Newton this offseason. The group also gets a nice boost from blocking for Arian Foster, who really was fantastic last season.

After all that optimism, though, we come to the quarterback. Earlier this week, Texans owner Bob McNair said that the quarterback for this team didn’t “need to be a superhero,” and that is true. Hell, he really doesn’t even have to be a sidekick.

The competition between Ryan Mallett and Brian Hoyer will probably come down to who gives the ball to the other team less often. With his middling physical tools, it’s easy to assume a lack of aggression and frame Hoyer as the safer option, but in his only season as a full-time starter, he threw more interceptions than touchdowns. Mallett has only 75 career pass attempts, so there’s not enough of a sample to compare his past performance to Hoyer’s, but this isn’t as simple as framing Hoyer as low-risk, low-reward and seeing Mallett and his big arm as the higher-upside option. The one who makes the fewest mistakes is probably getting the job, but it’s hard to know who it’ll be. That, after all, is what training camp is for.

Going to the Mat: The Dodgers Boost Their Rotation With Latos While the Marlins Shed Payroll