We Went There: Richard Linklater Talks ‘Boyhood’ at LACMA for the Oscar Stretch Run 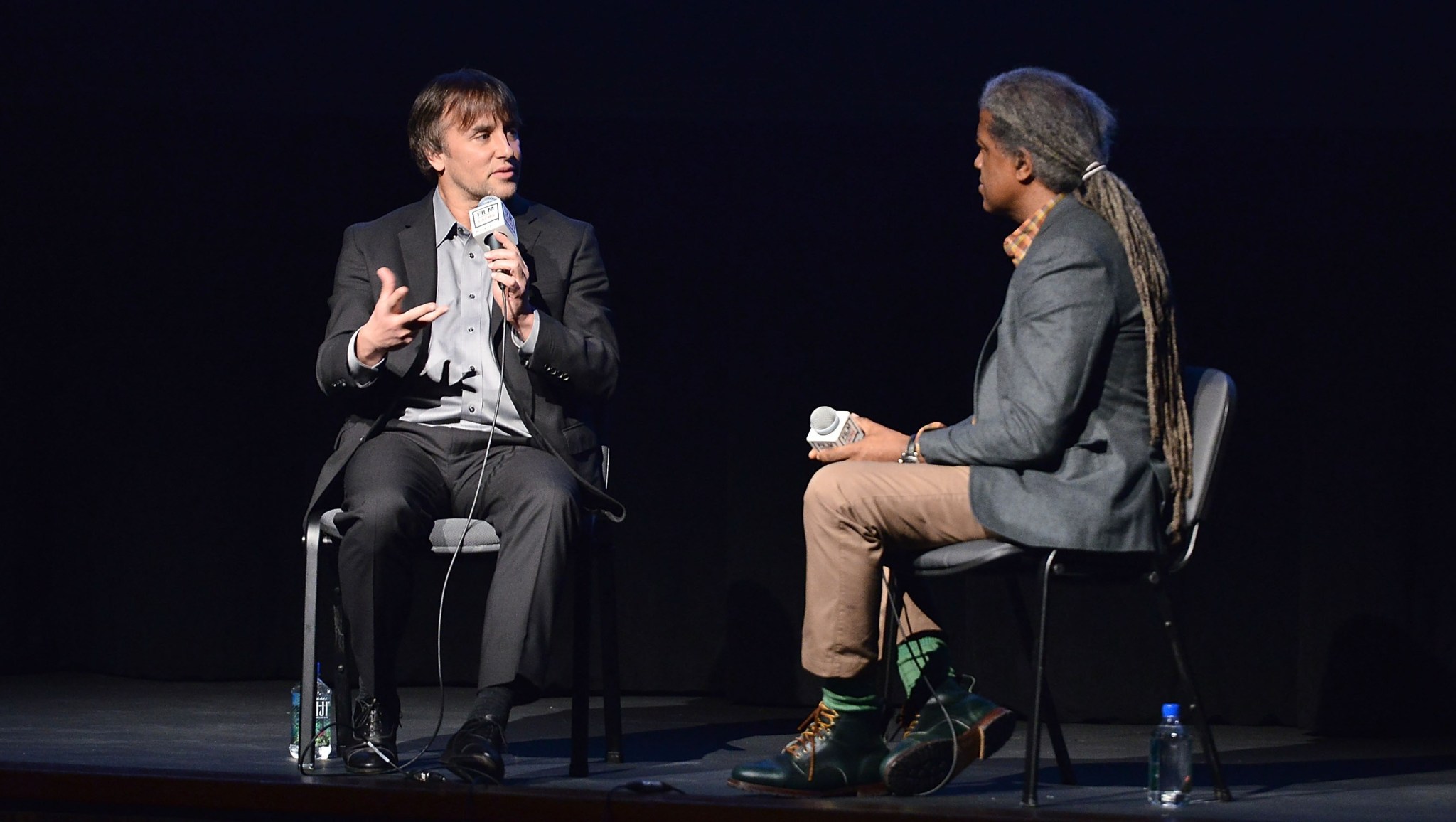 Against the darkest laws of awards season, here we are in January and Boyhood remains the apparent (and, pardon my bias, deserving) front-runner. Front-runner for what I don’t want to name, lest I break the bizarre spell the audacious indie has woven over the industry despite all the most cynical logic of Hollywood’s self-congratulation season. Even Elvis Mitchell couldn’t quite believe it when he introduced Boyhood’s director at Film Independent’s “Evening With” series at LACMA on Thursday night with “words I never thought I’d have to say: ‘Golden Globe nominee Richard Linklater.’”

Normally, events like this can give off the faint scent of costumed monkeys made to dance for Oscar, their organ-grinding master, but this was Richard Linklater, the Philosopher King of Slackers. He doesn’t even know how to dance — though he’d be happy to light a joint and bullshit about the nature of time with you. That said, having interviewed him a couple of times now, I’ve learned that it’s hard to avoid a good conversation with Linklater. Even his chitchat roams along infinite epicycles, and, like his films, at every point Linklater encourages you to stop and smell the roses with him. Sure enough, LACMA’s stoutly mid-century Bing Theater felt a little cozier than usual as Mitchell and Linklater got down to business with all the casual intimacy of sharing a cold beer at a half-empty bar.

Mitchell started off the evening with a featurette on the making of Boyhood, whose decades-spanning set videos only drove home how mind-blowing it is to make a movie over 12 years. If anything, the dramatic contrast in the behind-the-scenes shots of Ellar Coltrane makes you appreciate how subtle Linklater’s touch with the passage of time is in the film itself. If all he wanted was gimmicky fireworks, he should’ve cut back and forth over and over between old and young Ellar. But he didn’t. Next, Mitchell punctuated the conversation with the usual clips from the Linklater canon. Dazed and Confused, the Before trilogy, Waking Life, and School of Rock: All got their moments in the sun. For even the slightest fan of Linklater’s work, the clips were nothing revelatory — but they did demonstrate that you can pretty much pick a moment at random from a Linklater film and find something that will draw you in. (I secretly yearned for more playful selections — a darkly doe-eyed Jack Black in Bernie, one of Slacker’s peripatetic manifestos, or even Billy Bob louching up Bad News Bears.) The biggest kick came from watching Matthew McConaughey roll up in Dazed and Confused spouting “All right, all right, all right” with a shit-eating grin; the seeds of the McConnaissance were clearly there from day one — we were just distracted by the golden-boy looks. (“He’s a great character actor,” Linklater observed, only half-kidding.)

But the real pleasure of the evening came from listening to Richard Linklater do what Richard Linklater does best: talk. And boy did he talk — discursively, filled with half-polished philosophical asides, seeming to linger over insights before flitting off on tangents. Along the way he dropped some trivia crumbs. Julie Delpy claims to have been drunk the first time she met him. Raging Bull was the first film he saw that inspired him, and he admires how Scorsese’s films come alive in the small details — the neighborhood guys in supporting parts and the bits of real life that he lets leak in with small improvisations. And Boyhood would’ve been a novel if the Before sequels hadn’t pointed the way: He claimed that his revelation to shoot Boyhood over 12 years came to him at the exact moment he sat down to start work on the novel version. As for what he’s up to next after That’s What I’m Talking About, his “spiritual sequel” to Dazed and Confused, Linklater claimed he felt a musical coming on, using a breezy tone that suggests he’s kidding at the same time it asks, “But wouldn’t that be cool?” Mitchell eventually joked that he shouldn’t rule out a sequel to Boyhood. Linklater just nodded and laughed: “I could make a sequel to every movie I’ve ever made, because nothing damn much happens anyway.”

Underneath it all, Linklater seemed truly nonplussed by the firehouse of mainstream adoration he’s suddenly received. Could he really walk away with Best Director? Could Boyhood actually survive Harvey Weinstein’s Imitation Game onslaught or Selma’s current-events cachet? The phrase “Academy Award winner Richard Linklater” sounds like the dictionary definition of oxymoron. (Sure, he’s been nominated twice for screenwriting, but sadly, only lit agents care about those.) When Mitchell said Hollywood should throw more money Linklater’s way because he was, if nothing else, consistent, Linklater countered, “Consistently not commercial” before laughing about all the times he’s been “kicked out” of the industry. But, yes! That feels like the Natural Order of Things: Richard Linklater, the perennial outsider, keeping the art film faith; chronically underappreciated; constantly struggling to make something interesting … and from that struggle wresting beauty.

Though after an evening being reminded of Linklater’s penchant for scavenging the sublime from the banal, you realize such hyperbole has little place in Linklater-land. You get the sense that Richard Linklater would savor an Oscar no more or no less than a handful of wildflowers his daughter picked for him on a hike. And therein lies the secret alchemy of his films, the attitudinal DNA that makes Boyhood a towering, delicate work of art. Consummate storyteller that he is, Linklater ended the evening on a single perfect anecdote. After Michael Apted, whose Up documentary series represents the closest cinematic precedent for Linklater’s grand experiment, saw Boyhood, he clapped Linklater on the shoulder and whispered, “Keep going.”

Songs of the Week: N.E.R.D Alert