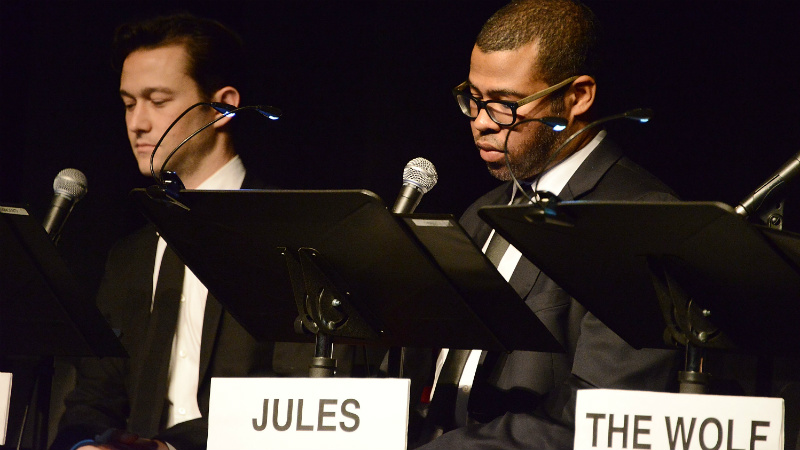 Sometimes a work of art can be so universally accepted as “one of the greats” that it starts to fade into the background of our cultural awareness. Classics get taken for granted: We all remember them fondly and admire their mastery without necessarily truly appreciating them anymore. For example, every Christmas we pop on It’s A Wonderful Life reflexively without actually watching it, a kind of cinematic white noise for the holidays. Unthinkable as it may be, I’d begun to wonder if Pulp Fiction would eventually suffer that same fate: idolized for so long and imitated so often (usually poorly) that its inherently badass essence had been slightly dimmed. Fortunately, the latest Film Independent at LACMA Live Read came along to remind us all just how goddamned good Pulp Fiction really is.

Film Independent’s Live Read series, curated by the terminally hip Elvis Mitchell, has been a fairly big success with its eclectic, sometimes theme-driven casting — e.g., the all-female Glengarry Glen Ross. But when it comes to live reads, Pulp Fiction has to be the holy grail. As fun as stunt casting is, scripts are essentially just blueprints, utilitarian literature not really meant to be treated as literature. At countless, coffee-starved table reads around this town every day, everyone laughs politely, knowing some things will just be funnier once onscreen. (Or praying they will be funnier onscreen.) Even among great scripts, rarely does one leap out, grab you by the throat, and beat you into submission. But Quentin Tarantino’s do, which is why they get passed around the Internet faster than a weed cigar at the Hollywood Bowl. And, all genre Nazi-killing joys aside, Pulp Fiction definitively remains Tarantino’s masterpiece.

So it’s no surprise the standby crowds were wrapped around LACMA’s Bing Theater just on the off chance of getting to hear it read live under the guest direction of This Is the End director Evan Goldberg (subbing for Jason Reitman, who usually does the stage-direction reading honors). And that’s without even knowing what creative grab bag of celebrities would be telling us all about Royales with Cheese, extoling potbellies, and quoting that famously liberal riff on Ezekiel 25:17. Those who managed to make it in weren’t disappointed. There was no unifying gimmick this time; the chosen performers were just a murderer’s row of great actors, most of them hovering in the forefront of our cultural consciousness these days, all of whom brought new life to legendary roles made famous by soon-to-be icons. After Elvis Mitchell introduced the event wearing his own thin black tie and hit-man black jacket, he introduced a cast that elicited a crescendoing roar from the audience. Let me see if I can get it all in one breath: 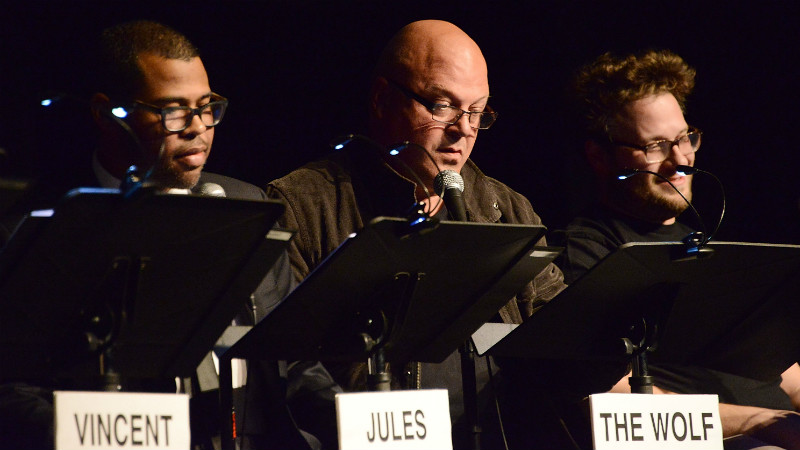 So, was it good? Damn right it was. Some random observations:

With the exception of Chiklis’s crowd-pleasing impressions, everyone wisely opted to do their own thing. And, of course, this was a cold read with no preparation — other than maybe the 1,000 times every aspiring actor’s watched Pulp Fiction and done its monologues in the mirror. (Goldberg said flat out in his intro that there would be no Superbad without Pulp Fiction. He and Rogen came to Hollywood quoting that script to each other endlessly, which is true of 95 percent of creative types under 40 here now.) But the testament to Tarantino’s writing is that Pulp Fiction can support an entirely different cast with its own unique take and still be grippingly hilarious. And a side benefit of the live read was that not one line of pitch-perfect dialogue got lost amid frantic camera motions or screeched performances. You forget, amid the frenzy of John Travolta stabbing Uma Thurman in the heart with an adrenaline needle, but Eric Stoltz’s background lines are riotously funny.

In fact, as I walked out talking to a young reporter just out of college, I couldn’t help smiling as she gasped, “I knew it was a good movie, but I didn’t remember how funny it was.” It was a sorely needed reminder that if Pulp Fiction is ever in danger of being ossified thanks to its reputation, all someone has to do is slip in a Blu-ray (or have Amazon beam it straight into your brain, whatever the future brings), and every live-wire line of dialogue will vividly remind you this movie is one bad motherfucker.

Tina Fey Will Play a Serious Journalist in 'The Taliban Shuffle'