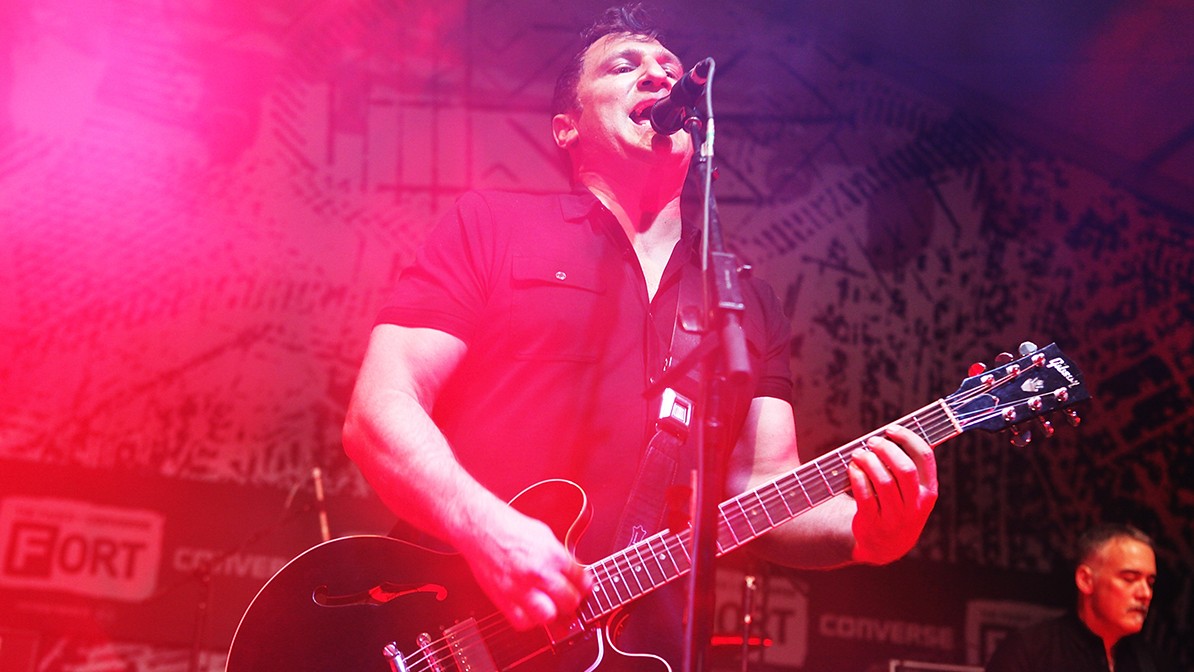 It’s possible that my obsession with True Detective has caused me to go Rust Cohle on every piece of data that I come across lately. But I pick up serious TD vibes on Do to the Beast, the first album by ’90s indie-rock stalwarts the Afghan Whigs since the group’s 2012 reunion. (Only guitarist Rick McCollum didn’t return for Beast.) Now, obviously, the Afghan Whigs weren’t influenced by the HBO show. It’s just that the group’s usual mix of sex, violence, cigarettes, dark mojo, and diseased obsession is in full effect on Beast, and it’s similar to my current favorite enigmatic and possibly metaphysical cop program. Actually, the Afghan Whigs seem to have had High Plains Drifter on the brain when they made the video for the album’s first single, “Algiers,” which suits the song’s slow-building, Wild West sense of melodrama.

OK, this song isn’t new. It comes from The Double EP: A Sea of Split Peas, which came out as a digital-only release last fall and collects songs that go back to 2012 by the casually brilliant 24-year-old Australian singer-songwriter. My reason for writing about it now is that the album is being rereleased in April on CD and vinyl. And, really, any excuse I have to post “Avant Gardener” is going to be seized. I could quote every single lyric from this funny, druggy song about a lay-about Monday in a trash-strewn shithole that devolves into a minor (but intense) mental breakdown. (For instance, there’s this line: “The paramedic thinks I’m clever ’cause I play guitar / I think she’s clever ’cause she stops people from dying.”) However, the part that always makes me laugh isn’t really a joke at all. It’s how Barnett sings, “It’s a Monday, it’s so mundane, what exciting things will happen today?” It’s loaded with aimless sarcasm and aestheticized bitterness, but also leaves open the possibility for genuine discovery, like the rest of this wonderful record.

Lydia Loveless, “To Love Somebody”

A line from the Barnett record reminds of Ohioan honky-tonker Lydia Loveless: “Just because you’re older than me / doesn’t mean you have to be so condescending.” On Loveless’s 2011 LP Indestructible Machine, there’s a song called “Steve Earle” about some guy (not actually the Buddha-like singer-songwriter) who approaches Loveless in a bar after reading an article that says she likes to do cocaine. He wants to form a partnership, professional or otherwise. But as her galvanizing third record, Somewhere Else, emphatically proclaims, the 23-year-old Loveless is already among the most assured artists working in the realm of alt-country (or however you want to classify the “loud and twangy rock songs” genre) at the moment. She requires no assistance from condescending creeps, unless you’re willing to be subject matter for one of her songs. Simply put, Somewhere Else is a knockout record, imbued with heartbreak and smart-ass resilience. You can hear plenty of both in “To Love Somebody.”

Much buzzed-about Syracuse punk-rock band Perfect Pussy will release its full-length debut, Say Yes to Love, on March 18. In the meantime, they’ve released a video for “I,” a cut from last year’s minimum fidelity EP I Have Lost All Desire for Feeling. This was a wise decision, because Perfect Pussy hits the road next month, and “I” makes seeing Perfect Pussy live seem about as much fun as typing the words “Perfect Pussy” repeatedly in the space of an 80-word brief.

The Hotelier, “The Scope of All This Rebuilding”

Since we’re on the subject of band names, do they come any dorkier than The Hotelier? Was “A Concierge” already taken? Actually, the name fits the thematic concerns of the Boston quartet’s furiously jagged second record, Home, Like Noplace Is There, which thoughtfully unpacks standard young-person angst about being stuck in a place that’s supposed to be comforting but in reality makes being alive seem like a middle-management job. (Maybe that’s just person-person angst.) On “The Scope of All This Rebuilding,” Christian Holden even sounds resentful about being born: “You cut our ropes / left the umbilical / and now I carry around / this weight of broken hope.” More importantly, Holden demonstrates that he can properly turn around a boyish croon into a car-crush scream, the most essential trick for any emo vocalist. But it’s in the dynamic interplay of the band where Home really cooks, transforming manic depression into rousing rock songs.

Nothing better after a heavy-metal smoke break than a piss-drunk country-rock barfight.

Guided by Voices is my favorite band of all time, and Robert Pollard is up there with Dylan and Springsteen as one of my favorite songwriters. In 2010, GBV’s “classic” mid-’90s lineup reunited, and I was extremely happy. I would’ve been extremely happy if the reunion had only resulted in a greatest hits tour. But Pollard isn’t one to not plug new songs into a band he’s currently working with, and the new old GBV has gone on to be incredibly prolific. The new Motivational Jumpsuit is the fifth LP the group has produced since 2012, and there’s already another GBV record on deck for later this year. Jumpsuit is more or less in line with the other recent GBV records — the “must-hear gem” to “promising but ultimately half-baked dead end” ratio is lower than the band’s ’93-’96 prime, but there are enough instant-grabbers like “Planet Score” to make you want to reinvestigate those dead ends.

This great Seattle sludge-metal trio cites Gang of Four and early Soundgarden as influences, which makes absolutely no sense until you hear “Pleasure Center,” the opening track off the recent Sleepwalking Sailors. Then you wonder why nobody shoved those bands in the same mosh pit sooner.

Bleachers, “I Wanna Get Better”

I have no doubt this song will wind up being a ubiquitous “summer jam,” as some have already rushed to declare. It irritates me so much that I swear I’ve already heard it 10,000 times.

Predicting the Oscars, Part 1: Those Tiny Categories That Inevitably Screw You in Your Oscar Pool