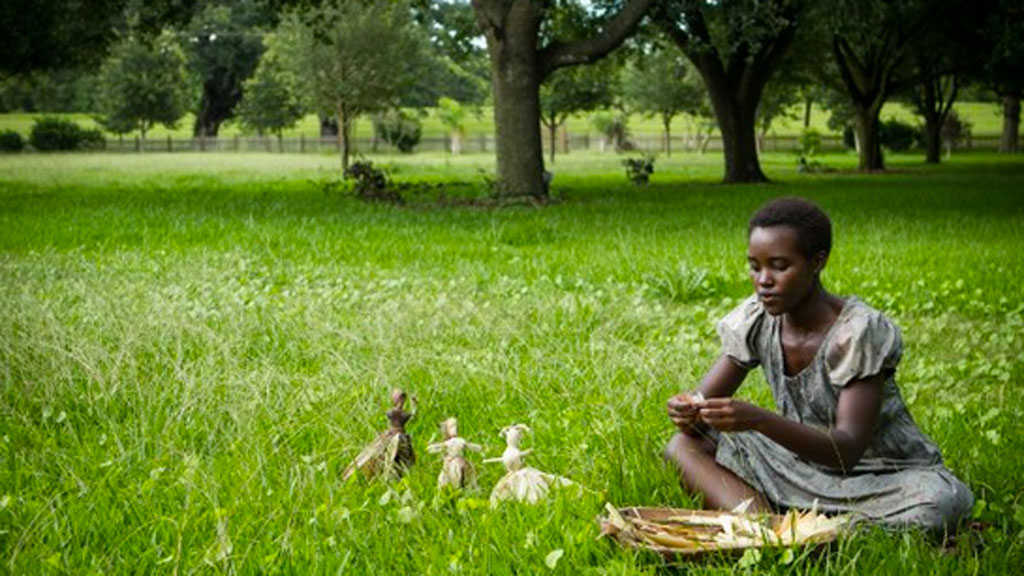 Solomon Northup has a happy, prosperous life as a free man in Saratoga Springs, New York. In addition to his work as a carpenter, he’s sufficiently well known for his violin playing that a pair of gentlemen engage him to travel for a two-week gig. All is well until he gets drugged into oblivion, wakes up in chains, and is sold into slavery under the name of Platt, a runaway slave.

We watch Solomon as he goes from the comparatively benign master Rev. Ford (Benedict Cumberbatch) to Epps (Michael Fassbender), an utter sadist. It is at Epps’s plantation that Solomon meets Patsey (Lupita Nyong’o), the most industrious cotton picker as well as the victim of Epps’s constant sexual assaults. Through it all, Solomon continues attempting to make contact with his friends back home in New York and regain his true identity and freedom.

Only the third film from director Steve McQueen, 12 Years a Slave won Oscars this year for Best Supporting Actress (the astonishing Nyong’o), Best Adapted Screenplay (by John Ridley), and Best Picture. It’s not exactly a fun time at the movies, but it’s time well spent.

Wesley Morris: “There have been complaints that the movie is too violent, that it depicts too many lashings, too many cruelties, too much interracial abuse, that all the gashes on all the backs (what Toni Morrison poetically described as chokecherry trees) are just too much. But that’s a privileged concern.”

When a young princess Elsa is unable to control her powers to generate wintry weather conditions, she chooses to protect her sister Anna from her dangerous magic by spending most of her time alone. So when Elsa comes of age and ascends to the throne, and the two sisters fight over Anna’s acceptance of a visiting nobleman’s sudden proposal, there’s little love or understanding between them to prevent Elsa’s anger from causing her powers to come out. As Elsa deserts the kingdom in a panic, she causes an eternal winter … and sets Anna on an adventure to find Elsa and set things right.

Frozen was a big winner at this year’s Oscars — earning Best Original Song, for “Let It Go,” and Best Animated Feature. But if you have or know any children, you have probably already heard all about it and also been treated to several hundred covers of the movie’s big number. Now you can own it and put it on whenever your kids want to see it and/or you’d like a 90-minute nap! Thanks, technology.

Wesley Morris: “Jennifer Lee wrote and codirected the adaptation, and it’s fun watching her flirt with all the princess-movie clichés about sweetness and nastiness and instant romance only to tweak or upend them.”

Based on the true story of the Abscam sting operation of the ’70s — loosely based, if the real-life players are to be believed — American Hustle revolves around a couple of con artists pressed into service by a sketchy FBI agent to entrap the mayor of Newark, New Jersey, into taking a bribe from a putative Arab sheikh. Russell repertory players Jennifer Lawrence and Bradley Cooper (of Playbook) and Amy Adams and Christian Bale (of The Fighter) were all nominated for their performances here, and all have crazy hair. Kind of long; mostly fun.

Wesley Morris: “Whatever it is that has led Russell to devise his version of a Hollywood movie, it’s nice to have. I could do without his tacked-on demand that farces end in familyhood the way romantic comedies end in marriage, but his rhythms and tonal shifts are musical.”

The passing of Nelson Mandela late last year naturally inspired a variety of reminiscences about his life from those who knew him best, but if those left you craving a look at his biography that’s actually based on his (auto)biography, Justin Chadwick’s film should fit the bill.

Luther and The Wire star Idris Elba plays the titular character, whom we see as a twentysomething playboy of sorts, then an activist, and finally as a prisoner at the brutal Robben Island. The story has a happy ending … eventually, but if you’re looking for more of a feel-good Mandela story, there’s always Invictus.

The teens and tweens who developed crushes on Daniel Radcliffe after Harry Potter and grew intrigued by Dane DeHaan when they first saw his face in the trailer for the next Amazing Spider-Man movie might be a little confused if their careless parents let them rent Kill Your Darlings. But let’s face it: The sooner youngsters learn how hot it is when their boy crushes make out with each other, the better.

Radcliffe plays Allen Ginsberg, a freshman starting out at Columbia in the ’40s. DeHaan plays Lucien Carr, an intriguing classmate hanging on to his spot at the school thanks to the intercession of an ensorcelled professor (Michael C. Hall). College is a time for experimentation, after all; Allen and Lucien’s relationship gets sexy … and then complicated when Lucien’s patron suffers a misadventure and a legal drama ensues.

We Went There: A Night Among 7,000 ‘Game of Thrones’ Maniacs at Barclays Center