We Went There: A Night Among 7,000 ‘Game of Thrones’ Maniacs at Barclays Center 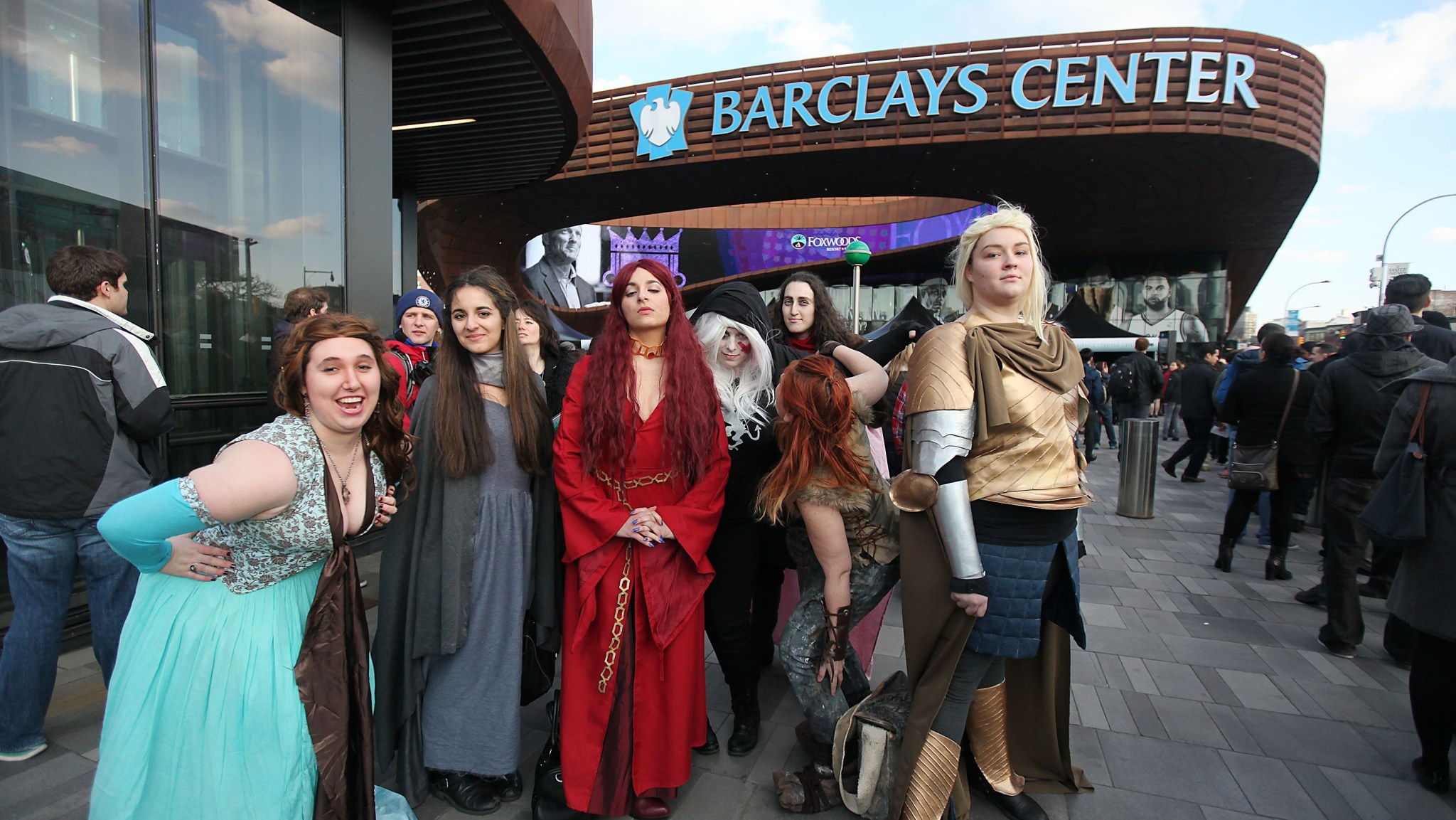 A journalistic quandary: Is it a conflict of interest to wear a gray hoodie with “Robb & Sansa & Arya & Bran & Rickon & Jon” printed on it while covering a Game of Thrones event? Is it more important to, say, project a professional impartiality while covering the occasion, or to blend in so as to put the natives at ease? Tough call. I went with the hoodie.

It’s the first day of spring, but inside the Barclays Center in downtown Brooklyn, winter is … well, you know. This is HBO’s “Game of Thrones: Epic Fan Experience” — 7,000 lucky dragons-lions-and-direwolves devotees, gathered in an arena across the street from a Target, a Guitar Center, and an OfficeMax, to get an early view of Season 4’s first episode, “Two Swords.” I would characterize the mood inside the venue as: freaking pumped.

Wandering around, I met Sylwia (pronounced sil-vee-ah) and Elise, both corporate lawyers, twentysomething professionals, huge fans of Game of Thrones (duh), and, through the show, the books. Elise’s favorite character is last-dragon Daenerys “Stormborn” Targaryen; Sylwia’s is teen assassin-in-waiting Arya Stark. Elise pinpoints the moment the show got its hooks into her deep enough that she felt the need to read 5,700 pages worth of fantasy novels: She just had to know what happened next, after Bran’s Season 1 defenestration from a crumbling tower in Winterfell. For Sylwia, it was Cersei and Jamie’s scene of sibling coupling. In other words, both became full-blown junkies within approximately a two-minute span at the end of the pilot.

I was chatting with both of them as they waited in line for one of the three Iron Throne photo ops situated at intervals throughout the arena concourse. My initial plan upon arrival was to interview a cross-section of fans and try to get a sense of whether people were reading the books as well as watching the show, which version they prefer, favorite moments, favorite characters, that sort of thing. So, after wrapping up that mental checklist of questions, I thanked the two women for their time and turned to go. “You’re not going to get your picture with the throne?” one said. Actually, yeah. Of course I am. What was I thinking?

As you approach the Iron Throne of Westeros, or any reasonable facsimile thereof, you may find yourself overcome with anxiety about how you’re going to sit in it. Will you do the Joffrey, torso askew in a pose of casual arrogance and barely coiled sadism? Or the Robert, slouched like a kingly sack against the hammered steel backrest, full of boredom and wine? Maybe just rest the right foot on the knee of the other leg in the the classic “figure-four chill dude in the waiting room” position. It’s hard not to overthink something as instinctual as your body position during the normally quotidian activity of resting your ass on something, when that something happens to be one of the most iconic symbols in the pop-culture zeitgeist and you get only one chance for a good picture. “There are other thrones, people!” yelled a slightly frazzled usher at the crowds overflowing the queue. “If you are past this point, you must move along to another throne.”

I can now report: The Iron Throne is uncomfortable. The one I sat in was, anyway. The seat, as one would expect of 1,000 swords hammered into the shape of a chair, is hard on the ass, but also narrower than you’d expect, and high. I tried to cock my torso over at an angle toward one of the armrests, elbow on the rest, hand under chin; kind of a Joffrey-meets-Biggie thing. But the circumscribed butt support area didn’t allow for the right body angle, and the result was much more Tin Man–meets-dirtbag than chilled-out sovereign. Alas. 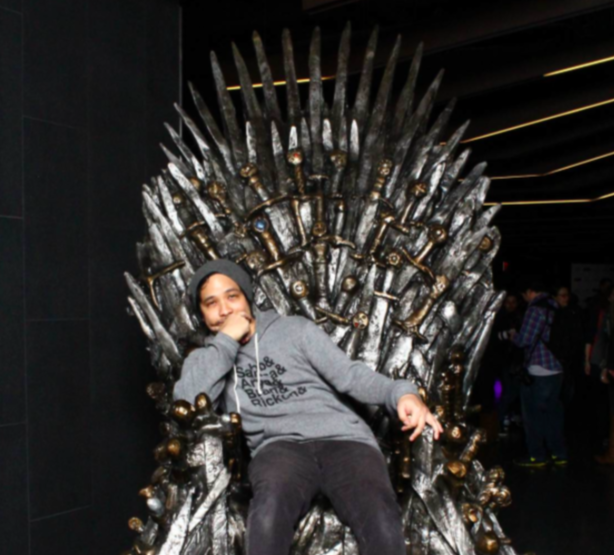 Gathering my picture, I headed down to my seat, which ended up being right in the middle of the arena floor, facing a stage arrayed with a drum set, DJ gear, keyboards, and another Iron Throne (the fourth?). Over the stage loomed the projection screen, displaying Season 4’s three-eyed crow logo. The Game of Thrones mixtape pounded away over the sound system.

There I made the acquaintance of Jimmy, a well-put-together young Englishman on assignment from London for a men’s style weekly, whose seat was right next to mine. We both noted the surprising paucity of cosplayers, though there were a few notable standouts. “There was quite a good Jon Snow,” Jimmy said. I mentioned the gender-switched Khal Drogo and Khaleesi I’d spied in front of the arena. As we talked, a woman in her thirties walked by wearing a Baratheon elk crown. Jimmy talked about the constant struggle of avoiding spoilers, made even more difficult because Thrones airs on Sky Atlantic on Monday nights in the United Kingdom, instead of on Sundays at nine, as it does here. This turns the Internet into an enter-at-your-own-risk zone for the intervening 18 hours. We discussed the recent Peter Dinklage profile in Esquire, and I mentioned I’d seen Dinklage a few times, walking his dog around Chelsea. “Yeah, the guy dressed as Robert Baratheon” — Jimmy turned to look for said guy — “told me he runs into him all the time.” 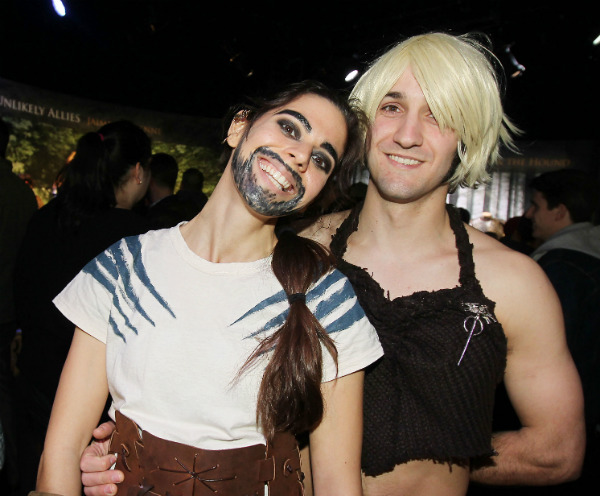 House lights darkened. Wild applause. A marching band appeared, red uniforms with white trim, and tall black hats. They lined up in front of the stage and launched into a disappointing rendition of the Game of Thrones theme song. The two conductors, arms pumping maniacally, couldn’t seem to get in sync with each other’s downbeat, and the spotlights illuminating the band also happened to be shining right in their eyes, making it hard for the musicians to even see the conductors’ gyrations. Still, they stuck the landing, managing to end on the same beat, and exited to a nice cheer from the crowd.

Then the stage lights came up, and, sitting in Iron Throne IV — projecting a regality that made me want to tear up my own throne photo — was Common, rocking Ray-Bans, a gray-and-blue leopard print sweatshirt, jeans, and high-tops. He burned through his Thrones mixtape track “The Ladder” and another uptempo cut, the title of which I didn’t catch. The second song marked perhaps the first time in world history the call-and-response section of a rap song has included the words “Game of Thrones” in addition to the more traditional “party” and “NOW SCREAM!” 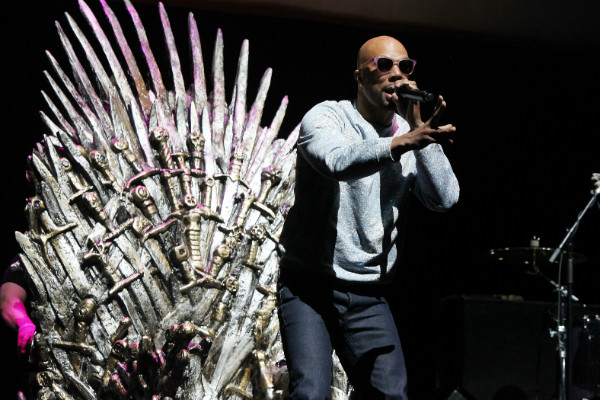 Exit Common. The public address crackled to life and introduced Kristian Nairn, better known as everyone’s favorite mono-locutor Hodor. The arena thundered with cheers mingled with several thousand people screaming, “HODOR!” “I’d feel a bit strange if I didn’t say ‘Hodor,’” Nairn said, before thanking the fans on behalf of the cast and crew. He then announced that there were a few surprises in store for us, and out waddled A Song of Ice and Fire author George R.R. Martin, wearing his trademark silvery vest over long-sleeve tunic and black Civil War–style cap with turtle brooch. A raucous standing ovation ensued, which included every member of the media in my section. I shouldn’t have stressed wearing the hoodie. Martin thanked the audience for following him on his “incredible journey” and said he wanted to bring a few friends out. Those friends turned out to be Maisie Williams (Arya), John Bradley-West (Samwell), and Sibel Kekilli (Shae). The crowd went Comic-Con Hall H–level ape-shit.

Hodor … excuse me, Nairn, then served as a moderator of sorts for a Q&A portion, with questions culled from Facebook. “You first, George,” Nairn said. To which Martin, with the practiced timing of someone who’d done this a few hundred thousand times before, quipped, “I’m working on it.” Laughter. (Although, technically speaking, Martin — at that moment you were not working on it. You were in Brooklyn, onstage at Barclays Center, messing about among your adoring fans, which is fun, I get it, but the show is going to finish without you, dude. Anyway.) Watching him own the stage like a consummate showman, I got the sense that Martin really loves basking in the warm nerd glow of appreciation. He famously loves attending fantasy conventions. That night he was among his people, in their thousands. As much as the story and its world are an escape for us, it’s also one for him — he just has the satisfaction being its creator. And maybe that’s why he can’t seem to finish the books. He loves escaping into the world he created as much as his fans do. 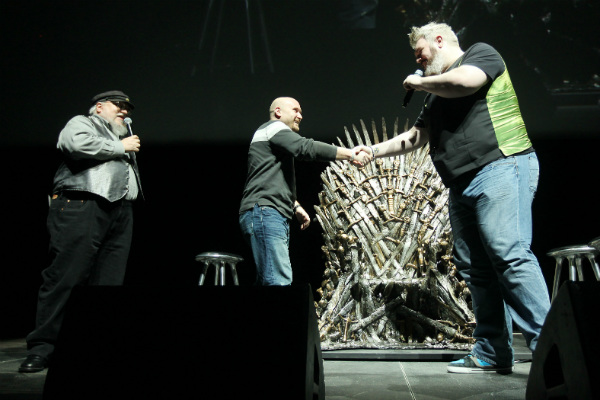 After the Q&A, Martin revealed that one lucky fan, selected at random, would win the Iron Throne sitting on the stage. He announced the winning ticket, which ended up belonging to a middle-aged bald dude named Mike, seated in the section directly next to mine. “All hail King Mike! King of the First Men and the Andals!” screeched Martin as King Mike lowered himself onto the throne, an absolutely delightful moment the author seemed to enjoy with every fiber of his globular, gnomish body. There followed a few awkward minutes of banter between Martin and the cast, where no one seemed to know whether King Mike should leave the stage or just sit there or what. Finally, Nairn broke the tension by telling King Mike he could stay, at which point a PA came and fetched the king away anyway. Mike shook Martin’s hand, leaning in to say something to the author, then exited stage left as Martin, in his New Jersey bleat, told the audience, “King Mike has commanded me to finish the book!” More laughter.

Finally, the lights went down for good and the first episode of Season 4 started. Has television caught or even surpassed the movies as the culture’s dominant form of narrative delivery? Sitting in the middle of 7,000 fans of a prestige cable show, cheering the appearance of every character and every ASOIAF-completist Easter egg, it certainly felt like it. No spoilers, promise. I will say this: The episode exuded an air of mounting doom punctuated with some truly hilarious moments. I even fist-pumped at the end.

Filed Under: We Went there, TV, Game of Thrones, HBO, George RR Martin

"The strangest or weirdest thing? Strange or weird, not wonderful... well, you know, in a scene that they cut out of the movie, I had to, you know, I was in almost full Fly transformation (incarnation? Is that the word I want to use? costume) and I had to slide down this angled wall over and over again by being covered all over my body with KY Jelly. That's kind of weird and strange." - Jeff Goldblum on 'The Fly'