Video on Demand Report: C’mon, Which ‘RoboCop’ Do You REALLY Want to Watch This Weekend? 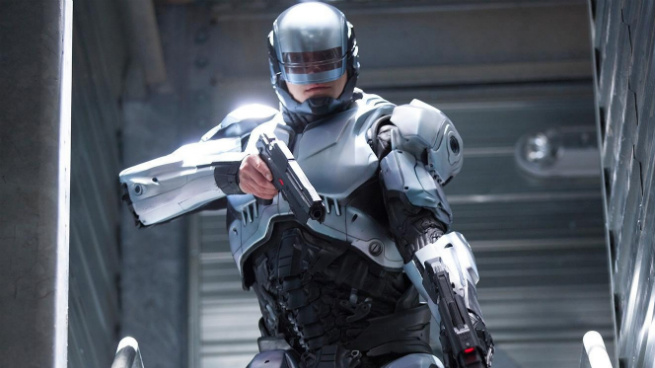 When I was recently lucky enough to guest on this site’s very own Girls in Hoodies podcast, I cited RoboCop as a high-water mark for the genre of “super-violent action movies,” and when Emily Yoshida asked whether I meant the 1987 original or this year’s remake, I was horrified at the suggestion that I might have been referring to the 2014 installment. This nonsense isn’t ultra-violent! It’s rated PG-13! HOW ARE YOU GOING TO TURN A DUDE INTO A RADIOACTIVE PUDDLE WHEN YOU’RE RATED PG-13?!

2014 RoboCop is again the story of Alex Murphy (Joel Kinnaman, now), who bounces back from a near-death experience with the help of OmniCorp’s engineering innovations. Brought back to “life” as a cyborg police officer, Murphy is still plagued with confusing memories of his old life. Now he’s sad. Too sad to dismember bad guys, probably.

The remake came in third at the box office in its opening weekend and is only rated 49 percent fresh on Rotten Tomatoes — suggesting that I’m not alone in my loyalty for the hard-R original film, which you should absolutely rent instead of this. If you really have your heart set on sharing the experience of watching a cyborg crime fighter with your tween-aged children, there’s always Inspector Gadget.

Wesley Morris: “You miss [1987 director Paul] Verhoeven’s borderline heartlessness and his inability to tell the difference between good acting and bad … That sounds like a put-down, but with Verhoeven it just means there’s no artifice to the performances. There’s a rawness to everything, and the rawness feels real.”

With each year that passes without Friday Night Lights producer Peter Berg giving us another show near as special or as good, instead returning to his macho roots with movies like Battleship, it’s all I can do not to start hating the whole action genre. Sure, I can still see a version of Tami Taylor on Nashville. But it’s NOT THE SAME.

Anyway: Berg returns to his macho roots to bring us Lone Survivor, the true story of Operation Red Wings, a counter-insurgency mission in the Afghan War. No spoilers, but the movie — which stars Mark Wahlberg, Ben Foster, Taylor Kitsch, Eric Bana, and Emile Hirsch — does have a title that kind of telegraphs how things end up.

Wesley Morris: “In Lone Survivor, the manly comedy at the naval base vanishes suddenly — as does your ability to distinguish Wahlberg from Kitsch and Hirsch from Foster. The blood, dirt, and hair on their faces make them interchangeable. That feels strategic: There is only the team. But the lack of human inflection has a peculiarly lulling effect. Nothing stands out.”

“Twins trading places/lives” is a staple of pop culture, from episodes of Beverly Hills, 90210 to Law & Order to the very premise of The CW’s short-lived Ringer. Usually the trade involves living twins (yes, even Ringer; the rich twin only faked her death); this one goes slightly more macabre.

Zoe Kazan plays both sexy, confident Audrey and meek, mousy Laurel in The Pretty One, based on Jenée LaMarque’s script (which she also directs). When Audrey gets killed in a car accident that Laurel survives, Laurel decides to run with everyone’s misapprehension and try living as Audrey. The black comedy also stars John Carroll Lynch (most recently of The Americans) as the twins’ widowed dad and Jake Johnson and Ron Livingston as potential love interests.

Summer is the perfect season for road trips, but if you can’t take off this weekend for real, then maybe a rapturously well-reviewed road trip movie will be the next best thing.

Premiering on VOD the same day as its theatrical release, Lucky Them is the story of a music critic (Toni Collette) trying to research the story of Matthew Smith, a rock star in the Kurt Cobain mold who left public life a decade earlier. On the line are the fortunes of the magazine she writes for and a possible documentary by her rich friend Charlie (Thomas Haden Church), who joins her to film the whole process. The two meet interesting/weird/sexually aggressive characters along the way — including Fruitvale Station’s Ahna O’Reilly and Ryan Eggold of The Blacklist — as happens in all great road trip movies, and the very best actual road trips.

A Long Way Down

Think this week’s new releases couldn’t include a black comedy with a premise blacker than The Pretty One? Wrong! A Long Way Down revolves around four lost souls who develop a close bond with one another when they meet on a rooftop they’d all intended to jump off to their deaths.

On VOD before its theatrical release, A Long Way Down (based on Nick Hornby’s novel of the same name) is Collette’s second on-demand film this week. Here, rather than a glamorous rock critic, she’s an overwhelmed single mother dealing with a physically challenged son. Her cohorts are disgraced TV presenter Pierce Brosnan, depressive politician’s daughter Imogen Poots, and terminally ill delivery boy Aaron Paul. The story of how they all stopped one another from committing suicide turns them into media darlings … but not without complications.

Filed Under: Movies, Video On Demand, VOD, VOD OCD, robocop, lone survivor, a long way down, The Pretty One, Lucky Them

Grantland Recommends: ‘The Mind of a Chef,’ ‘Fridays at Enrico’s,’ High-Tech LARPing, and More