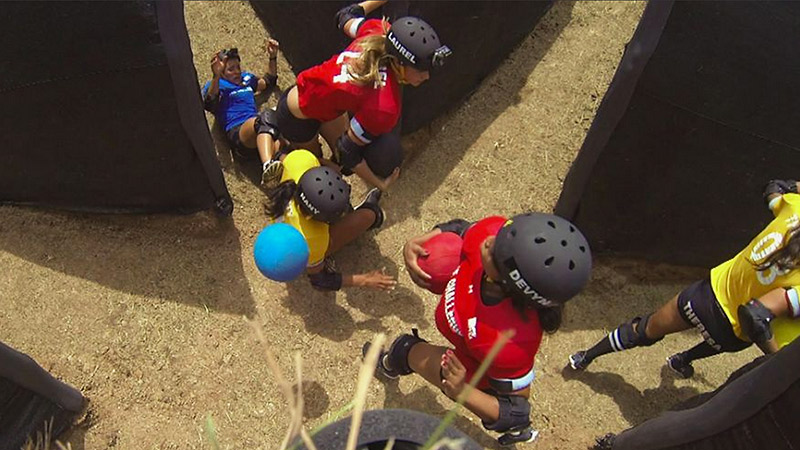 Today is June 6, 2014, and while that doesn’t really matter, it’s significant because it marks three years of Friday GRTFL columns. Aside from sitewide holidays, GRTFL hasn’t taken a single Friday off, making this something like the 150th edition. I’m starting today’s column in this completely unfunny, egotistical, self-serving way because I want to acknowledge and thank the half-dozen editors and two dozen readers of this column. It’s fucking fun to write because of you. Thanks for being a part of it. And yes, I read all the mean comments.

Anyway, enough of that. Let’s make fun of the assholes on reality TV for the 150th time!

It’s important for respected journalists to be objective about things and avoid letting personal opinions, desires, or history distort how we view the things we cover. So taking that into consideration … I can honestly and definitively say that the “balls in” elimination on this week’s The Challenge was a more enjoyable sporting event than the NBA Finals. 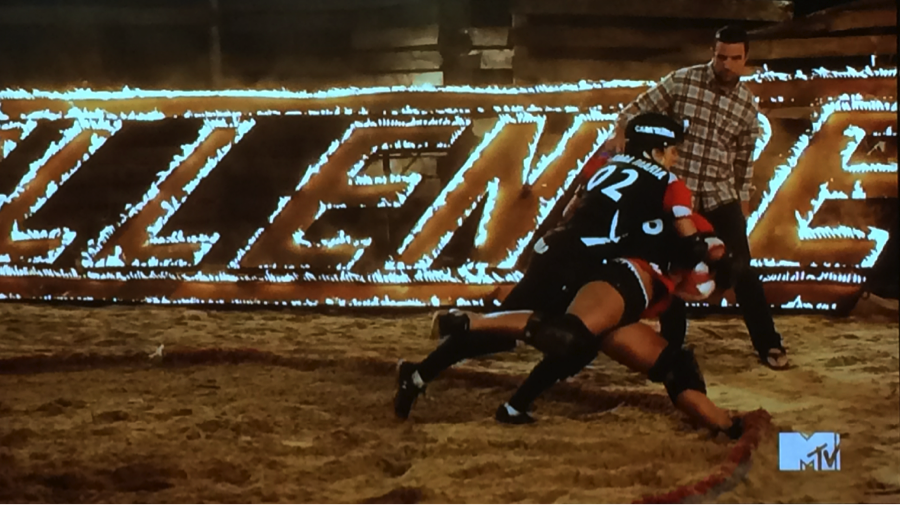 Note TJ, surveying the action like a sandaled Mills Lane. After TJ’s air horn marked the end of a hotly contested first round, Cara Maria and Jessica started exchanging blows. In the NBA, this would have necessitated flagrant fouls, reviews, ejections, and fines. But this is The Challenge, so they played on. Later, not to be outdone by Cara Maria’s leopard maneuver, Jessica answered by literally hitting Cara Maria so hard that she lifted her a solid 10 inches off the ground using another tackling technique that’s now banned in our species’ most violent professional sport: 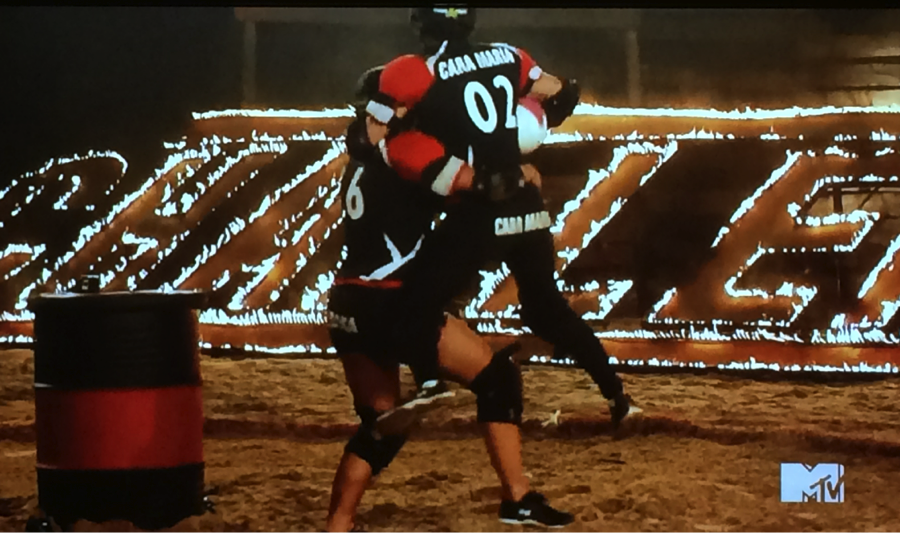 The finish in this elimination was not unlike the finish in Game 1: Cara Maria simply outlasted an overmatched Jessica and sent her packing. I know you think I’m kidding about the whole Challenge > Game 1 thing, but I can’t fight the way you feel. And I certainly can’t fight the facts.

Nick is going emotional normcore on The Bachelorette … and he’s killing it. I don’t know why no one has used this strategy before, but it’s fucking brilliant, and more Normcore Nicks will surely follow. Check out Normcore Nick at his peak “I’m just a regular guy, this is weird, you have to marry me now” glory:

Any practical person would be skeptical about this. I mean, how could you not? It’s tough because I know what is potentially ahead, um, and if those emotions start to come and I start feeling something and I feel like you might be feeling something too … I have too much time not knowing where I stand.

He then sipped on his perfect California white wine while sitting on the perfect California cliffside and watched as Andi fumbled together some bullshit response that went something like this: “So I think you have to go with it. Say what you feel.” Normcore Nick has gone from bottom five in the “attractive” power rankings to top five in the “next Bachelor” power rankings, and he isn’t even trying. Or he’s REALLY GOOD at seeming like he isn’t trying. Either way, he’s killing it. I mean, check out what he left Andi with before the Rose Ceremony, after admitting to having a “crush” or her: “I feel like a 12-year-old boy. I hope it’s endearing”

It’s hard to talk about Eric, because after he left the show, he died in a tragic accident. Figuring out how to deal with that on the show and, MUCH less importantly, in this column became further complicated because of how he left the show. On Monday’s episode, his last, Eric left before the Rose Ceremony after really upsetting Andi with a targeted truth bomb that he issued after she accused him of not being open:

The more I thought about it, and this is the hardest thing to say: It’s the opposite. I feel like you are not being the real Andi with me. I’ve seen little glimpses of you, like, the real you, walking from the boathouse to the beach on our one-on-one date. And that’s the Andi that I like. When we were putting the kite together, when we were building the sandcastle, when I saw you just gripping leather when we were taking off in the helicopter. I came on this to meet a person … not a TV actress.

Eric out Andi-d Andi! He read the tea leaves, recognized that Andi wasn’t going to choose him for ForeverLove, prepared a blatantly honest speech, and then brought the thunder of a thousand hurricanes … which is exactly what Andi did to Juany Pabs.

Eric’s comments led Andi to deliver her obligatory “If you don’t think this is real then the door is right there, because this is so real to me, every single day this is real to me” speech. Every single Bachelor or Bachelorette since the dawn of time has given this speech, and I’m still waiting for someone to be like, “You know what? This is foolish, why am I dating a chick who’s dating a dozen other dudes? Deuces.” Still no dice. If anybody’s going to do it, it’ll be Cody, because there aren’t any circumstances under which Andi winds up engaged to that man.

Nany vs. Consciousness (The Challenge), 75 points

Last night the women of The Challenge proved to be both more competitive and dramatic than the men of the NBA and more tough and reckless than the men of the NFL. When an NFL player takes a severe blow to the head, he’s forced to leave the game so he can undergo testing on the sideline and in the locker room before a trained professional decides whether it’s safe for him to compete. On The Challenge, when a contestant gets her SHIT BLOWN UP like Nany here: 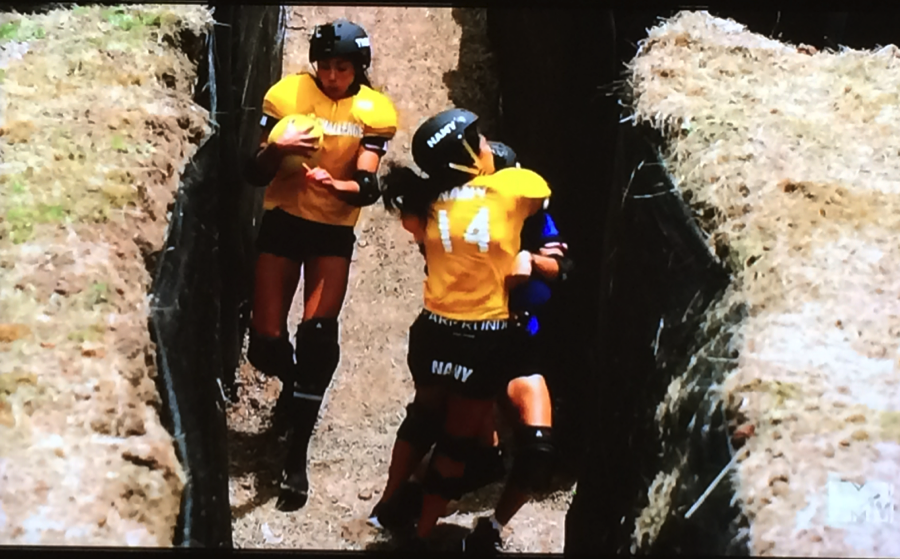 She keeps it moving and gets the W.

Nany vs. Cohutta (The Challenge), 75 points

Nany had regained most of her mental faculties in time to tape last night’s aftershow, during which The Worst Host in Television Jonny Moseley asked her about sleeping with Johnny Reilly despite flirting with Cohutta for weeks. She answered with a statement that sums up the courtship experience for the vast majority of our species:

I’m just an idiot girl sometimes, and I don’t use my head. I feel bad, too, because Johnny put in no effort to sleep with me, and Cohutta put in effort every day. It really does look like nice guys finish last, and he is an amazing person.

Go ahead and act like you can’t relate to one of those three people.

It was great to see Boyz II Men on The Bachelorette, singing “I’ll Make Love to You,” and it was even better seeing Boyz II Men on SportsNation the next day, singing “End of the Road” to Lance Stephenson. 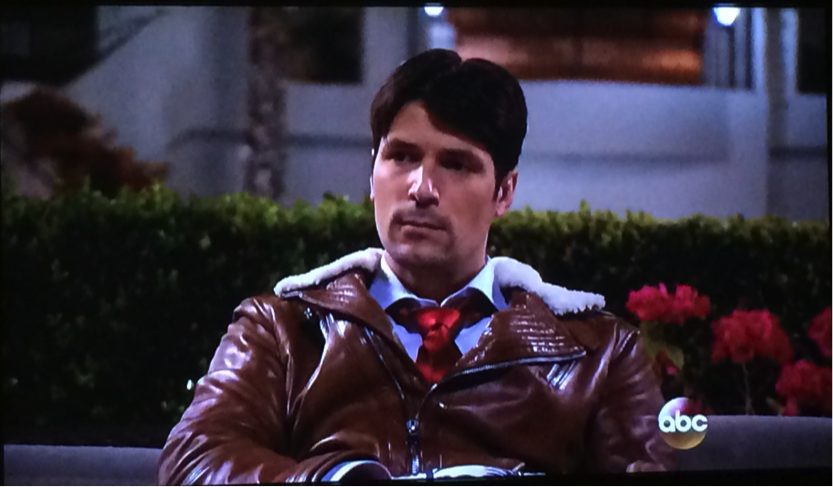 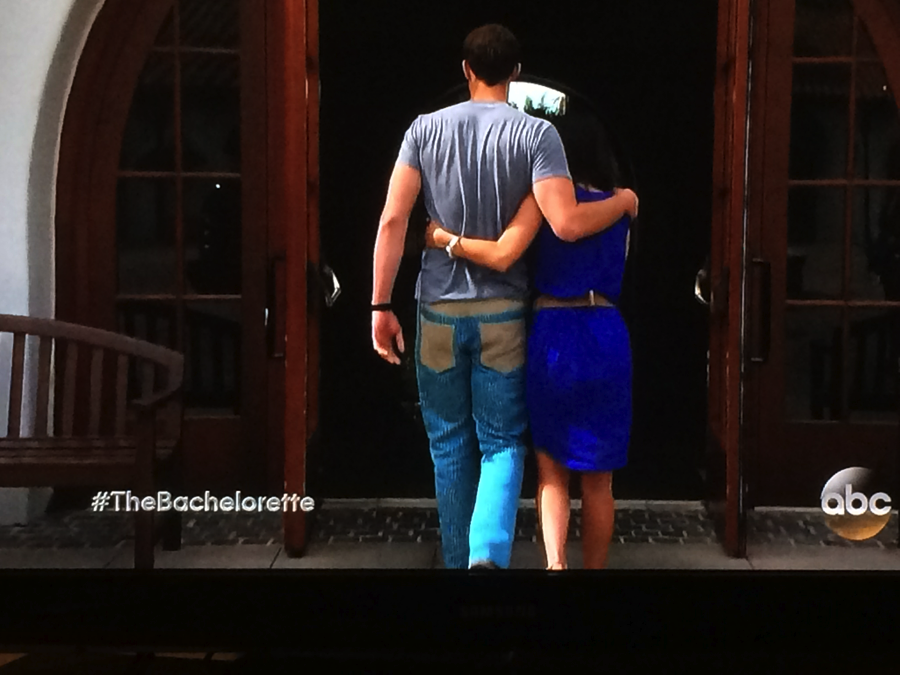 1. If you wear those pants and you call yourself a “pantsapreneur,” you’re basically the fat trainer, the pimply dermatologist, and the crazy shrink all at once.

2. This dude said, “I’ve had a lot of time to think and prep and get excited for this date” AND THEN WORE THESE PANTS!

3. The pants JJ wore later in the episode make these look like Levis. I think they were actual casino carpet.

I’m giving this segment a 6 out of 10. I’ll keep working it and see if it has staying power.

I’ve always supported Laurel, even after she emotionally eviscerated Easy, put Paula Walnuts on suicide watch, and melted Cara Maria into a puddle of self-loathing. This week, though, it was tough. It started in the episode’s first scene, with Laurel telling Cara Maria she was dumb, telling her to shut up, and telling her that she was annoying even though all Cara Maria did was be like, “You wouldn’t vote me in before you would vote in the people that aren’t your friends, right?” Then, during the aftershow, they played a clip of Laurel yelling, “Don’t talk to me, don’t talk to me, don’t talk to me” over and over at Cara Maria while Cara Maria was, you know, not talking to her. Then, while I was still on Team Laurel, they aired that short little bit in the middle of a late commercial break. And it was terrifying. I’ll let Zach explain: “Every time a conversation goes down, Laurel is taking notes in her burn book … constantly jotting notes down, drawing people dying, witchcraft.” OK, weird, but I’m still on Team Laurel. And then they showed her “Burn Wall:” 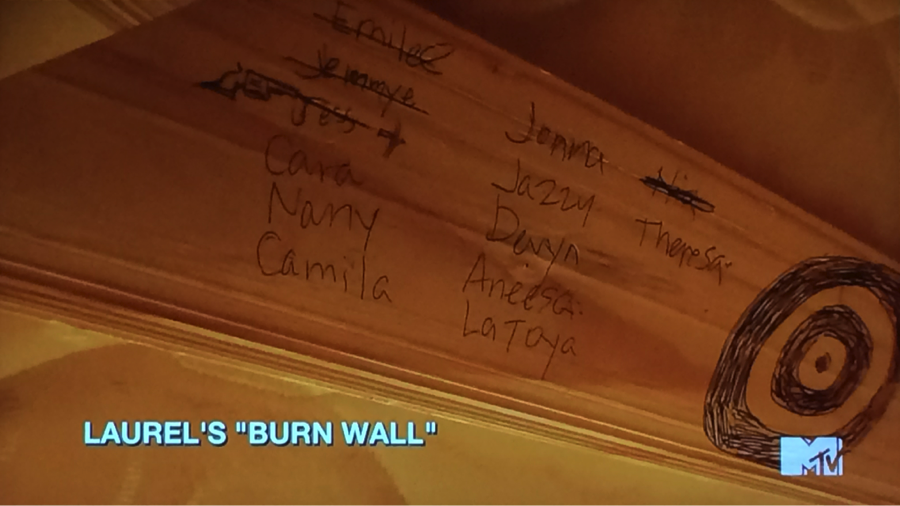 On her date with Dylan, Andi kept prying (with prodding from the producers, I’m sure) to find out why Dylan was holding back. He was holding back because of all the tragic, horrible shit that had recently occurred in his life. His story was genuinely depressing, and I’m sure everyone watching felt bad for him. But to be honest, the whole time he was talking all I could think was Why is this dude’s collar so fucking gigantic? 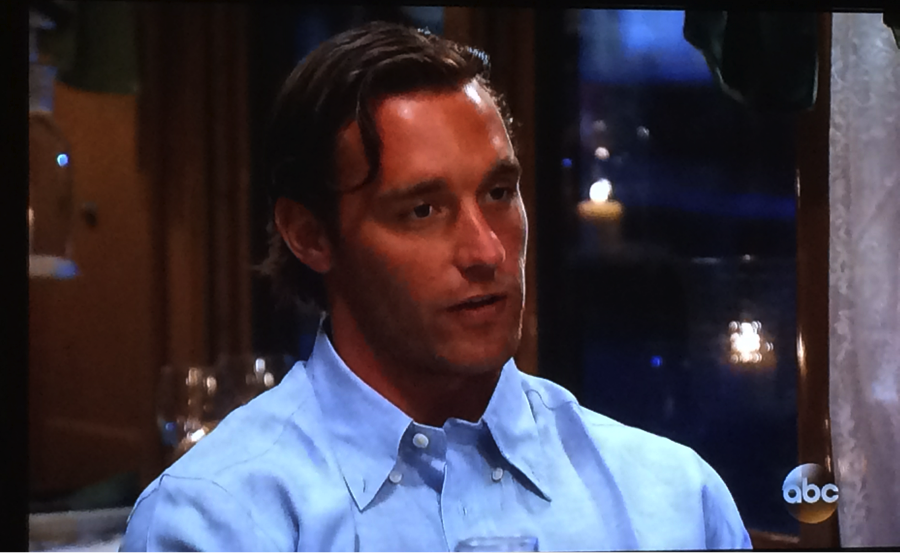 The Sport of Bachsketball (The Bachelorette), 1,000 points

Big week for basketball! Sure, the NBA Finals are cute and everything, but this week ushered in a new, better sport: Bachsketball. Yep, the boys of The Bachelorette teamed up first against WNBA players and later against each other. There were winners, there were losers, and now there is a GTRFL Top Five. This week’s GTRFL Top Five is the Top Five Takeaways From the Advent of Bachsketball, listed from “That is nice” to “I never thought of that and now everything has changed forever, seriously, what really is the universe anyways?”

2. Why the Sharpie on the uniform? God, that pissed me off. I’m not even explaining.

1. Dear bros of the world, you CANNOT compete with the women of the WNBA. We all know those dudes at the gym/park who think they can play in the WNBA. The WNBA women are SO MUCH BETTER THAN YOU THINK. You sit in a cubicle all day; they run ball. You get emails; they get buckets. Stop thinking you can play in the WNBA. Just stop.

Enjoy the weekend, listen to the Right Reasons podcast, and come back next week to track the rise of Normcore Nick.

Video on Demand Report: C'mon, Which 'RoboCop' Do You REALLY Want to Watch This Weekend?