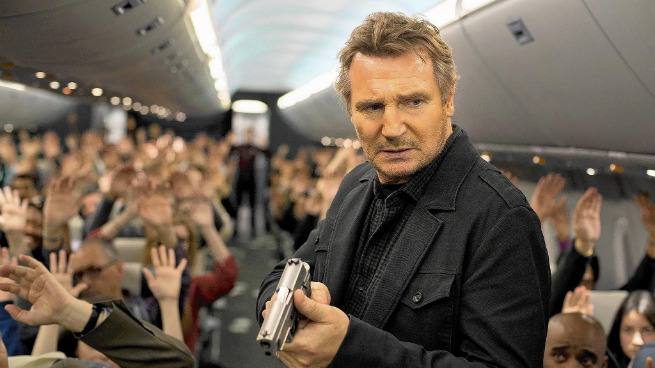 I don’t want to profile anyone, but I have to say, if I ever get on a plane and Liam Neeson’s already seated, I’m getting the hell off. You know trouble follows this dude every time he goes anywhere! Haven’t you seen The Grey? Or Taken? Or Unknown? Or Taken 2?!

Non-Stop is classic late-period Neeson: He’s an air marshal (and an alcoholic) who’s on a nonstop flight from New York to London when he starts getting ransom texts on his phone. How is this old drunk going to foil the plan and keep all the passengers safe — not to mention the sexy flight attendants played by Michelle Dockery and Lupita Nyong’o? “Being Liam Neeson” has got to be part of his strategy.

The thing about Non-Stop — which I will DEFINITELY be renting this weekend — is that it might be a silly sub-Taken time-waster that pulls its punches on … well, its punches; it is rated PG-13, after all. But even if the only reason, in the cosmic sense, it was made was so it could be promoted with this comedy short …

Wesley Morris: “This is Agatha Christie doing the nasty with Alfred Hitchcock.”

Not to be confused with 3 Days to Kill, Jack Ryan: Shadow Recruit is the other movie from January in which Kevin Costner plays an aging CIA agent. But now they’re both on demand, so have a film festival! Or wait for Draft Day, which will probably be out, like, next week.

Anyway: JR: SR stars Chris “Kirk” Pine as Jack Ryan, which means he joins an exclusive fraternity that also counts Alec Baldwin, Harrison Ford, and Ben Affleck as members. This time around, Ryan is a war hero in a Wall Street cover job while also working as a covert analyst for the CIA. Before long, business intrigue crosses over with terrorism. Typical!

Wesley Morris: “Jack Ryan became synonymous with airplane reading and business travel because Jack Ryan is really a middle manager’s fantasy. He’s a little older, he’s forever being brought onto some project that’s gone sideways, and with his superior skill set and hard-won insights, he’s going to show both the brass and the junior staffers what’s what — albeit in a quiet, unshowy way, because in Clancy’s world, the worst epithet you can hurl at someone is ‘cowboy.'”

Now that the economy is recovering and everything’s supposed to be OK again, is there still an appetite for films about the moral compromises made by people who work in finance? … OK, but what if Costa-Gavras directed one?

In Capital (or, if you will, Le capital, since it’s partly in French with English subtitles), Gabriel Byrne becomes CEO of a bank and starts acting like a dictator, basically — laying off employees and ignoring his board. By the time he gets to the deal with an American hedge fund, you’ll be deciding where it ranks among the likes of Margin Call, Arbitrage, and The Wolf of Wall Street.

The last several years have brought us a bonanza of great independent teen coming-of-age films, from Adventureland to The Way Way Back to the aptly titled Kings of Summer. Ping Pong Summer looks like a strong contender to join those ranks.

In the summer of 1985, 13-year-old Rad takes a vacation to the resort town of Ocean City, Maryland. There, he finds a mentor to cultivate his interest in Ping-Pong. The well-reviewed film — which you can rent the same day it hits theaters — co-stars Amy Sedaris, John Hannah, Lea Thompson, and the patron saint of Ping-Pong, Susan Sarandon.

Integrating a widowed parent’s partner into the family can be challenging for a child — so much resentment, with the new step-parent left in the impossible position of determining how to stand in for the deceased parent without replacing him or her. And when insane murderers get involved, the situation can be even harder to navigate!

In Torment, available the same day as its theatrical release, Hannibal‘s Katharine Isabelle is Sarah, wife to Cory and new stepmother to Cory’s son, Liam. When the three take a vacation to a remote house in the woods, Liam is soon kidnapped by a family of torturing murderers, and while Cory and Sarah are united in their quest to recover Liam, it seems safe to say that — at least at first — very little bonding ensues.

Reimagine Dragons: The Grimly Handsome ‘How to Train Your Dragon 2’

‘Game of Thrones’ Season 4 Finale Precap: Let’s Do It for ‘The Children’