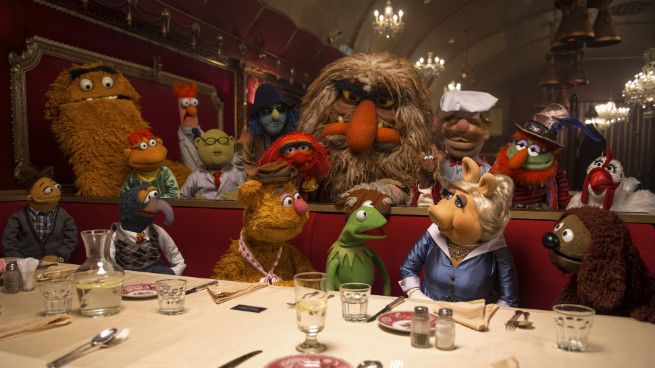 It makes me so sad to think that today’s kids think the fake Muppets of Muppets Most Wanted or The Muppets from 2011 are the real Muppets. If you parents out there aren’t exposing your children to CANON Muppet movies — the ones that were made when Jim Henson was still alive — then you better never tell me because I will call Child Protective Services on you so fast.

Anyway, here’s another fake Muppets movie, and yes, effing Walter is back. Picking up where The Muppets left off, the Muppets agree to tour Europe with Dominic Badguy (Ricky Gervais) as their manager, and I feel the plot “twists” telegraphed by that character name would be insulting even to a child. Little do the Muppets know that Badguy (I mean, honestly) is in league with an evil Russian frog named Constantine — who happens to look exactly like Kermit, if Kermit had a mole on his face — who has just escaped prison and is looking to heist some jewels. Before you know it, he’s assumed Kermit’s identity and gotten him locked up in his place.

Will the Muppets figure it out and get him sprung? I feel like the conclusion’s a bit predictable, but along the way we meet (human) characters played by Tina Fey, Ty Burrell, Jemaine Clement (whose Flight of the Conchords partner Bret McKenzie reprises his position from The Muppets as the film’s songwriter), Hugh Bonneville, Ray Liotta, Lady Gaga, Tom Hiddleston, and a few dozen more.

Wesley Morris: “With the show in disarray, the best numbers fall to the guest stars. … The Muppets themselves are overstocked and underused.”

John Cassavetes was one of the most incisive directors of his generation, creating indelible films like Faces and A Woman Under the Influence when he wasn’t acting in sly feminist films like Rosemary’s Baby. And this year saw the release of The Other Woman, directed by his son Nick. What a proud legacy.

The Other Woman revolves around three women — careerist Carly (Cameron Diaz), housewife Kate (Leslie Mann), and bonehead Amber (Kate Upton), so yes, all three things women can be are represented — and Mark (Nikolaj Coster-Waldau), the guy who’s been cheating on/with all of them, but mainly Kate, the one who’s married to him. When they all find out about each other, they push through their rage to join forces and get revenge on him. Empowering stuff. (TWC also has a version with a gag reel available to rent, in case you need much, much more time with these jerks.)

Wesley Morris: “The Other Woman floats in a toilet-bowl universe not far from Bride Wars and Something Borrowed, proving you no longer need Kate Hudson to make a Kate Hudson movie.”

After surviving capture by Japanese forces and imprisonment in a Japanese POW camp, former British army officer Eric Lomax (Colin Firth) continues to experience post-traumatic stress that affects his life years later. In an attempt to move past the horrors, Eric finds Takashi Nagase (Hiroyuki Sanada), his camp tormenter, and confronts him about their shared past. Joining Firth are Nicole Kidman as his wife and Stellan Skarsgård as his best friend.

The Railway Man could pair with The Act of Killing for shared subject matter (forcing perpetrators of state-sanctioned violence to reckon with their actions) or 12 Years a Slave (since The Railway Man is also based on the autobiography of the film’s protagonist). Check those out if you’re looking to add more programming to your extremely depressing film festival.

Wesley Morris: “The Japanese army did behave monstrously, but movie politics back the story into self-congratulatory racism — the Asians are either hideous or docile.”

Disneynature’s annual live-action Earth Day film arrives on VOD just in time for you to be able to choose whether you want your John C. Reilly in the “zom-rom-com” Life After Beth (DirecTV subscribers only!), or narrating a story about a family of bears.

In this film (which, full disclosure, was written by my very dear friend Pamela Ribon), Alaskan mother bear Sky gives birth to a pair of cubs, who after a few months venture down from their mountainside home to integrate with a larger group of bears. Cubs Amber and Scout contend with two rival male bears, not to mention other aggressive wildlife and the threat of avalanches. (Since it’s Disney, I hope everything comes out OK for our ursine heroes.)

Maybe someday we’ll be able to describe films about groups of college friends reuniting after a long absence without comparing them to The Big Chill. But not today!

What everyone needs to know About Alex is that he’s barely past a serious depression. So all his old friends (and one friend’s new girlfriend) show up at a summer house to try to remind him that there are people who love him … and also keep an eye on him to make sure he’s safe. Jason Ritter plays the titular Alex, while his crew of college friends includes Max Minghella, Max Greenfield, and Aubrey Plaza.

I’m not a snob. I liked the broad comedy of I’m Gonna Git You Sucka and even some of the Scary Movie movies. I wish Marlon Wayans well, as I do all celebrities I sometimes see at my gym. (This is your year, Leland Orser!) But here’s how Wikipedia starts its plot summary of A Haunted House 2:

“Malcolm Johnson and his cousin Ray-Ray are driving Malcolm’s possessed girlfriend Kisha to the hospital after he beat her senseless for trying to attack him.”

If you’re planning to spend your weekend looking for prehistoric skeletons, you should probably watch this documentary first to see exactly how any discovery you might make could be taken out of your hands.

Available on VOD the same day as its theatrical release, Dinosaur 13 tells the story of “Sue,” the largest Tyrannosaurus rex ever found. Though paleontologist Pete Larson and his colleagues from the Black Hills Institute found Sue, the bones were then seized by the federal government, kicking off a decade-long battle with several different government agencies for the rights to the discovery.

Filed Under: VOD, Movies, muppets most wanted, The Other Woman, Bears, Dinosaur 13, about alex, a haunted house 2