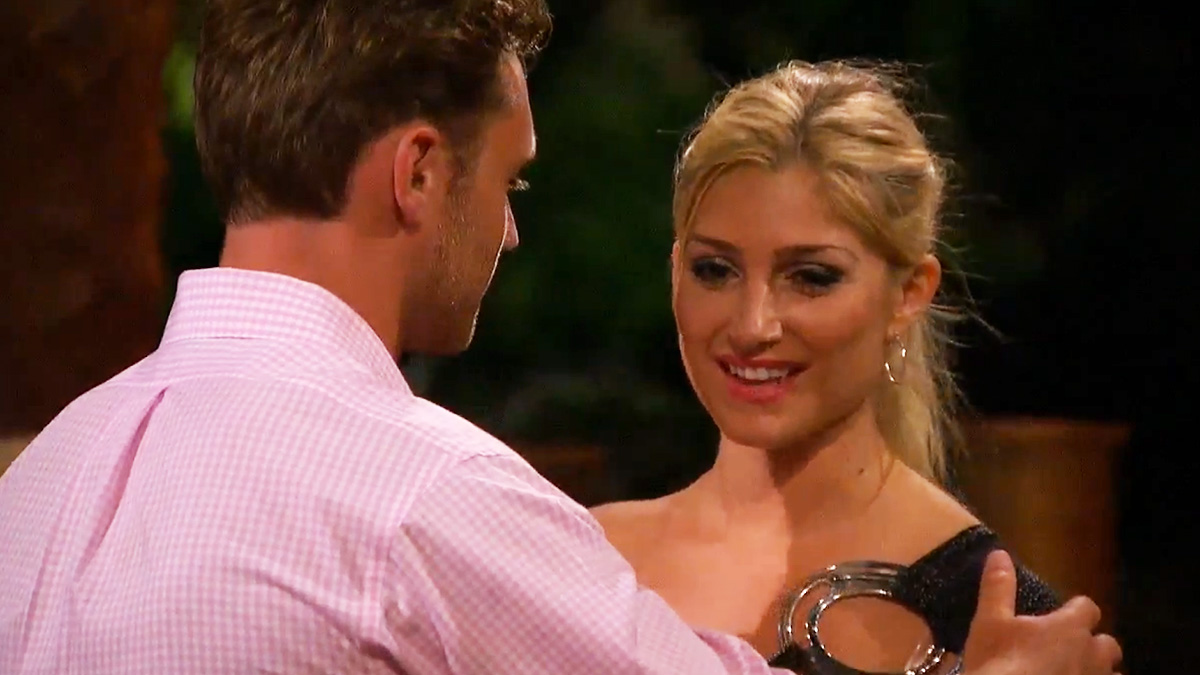 The key to savoring the brilliance of Bachelor in Paradise is to recognize and appreciate the delusion that’s running rampant all over BIP’s secluded Mexican sex den headquarters. None of the people on this show share the objective reality that we do. None of them have a drop of self-awareness in their psychological cocktail. But that’s what makes watching them so much fun. There’s comfort in schadenfreude: We may be desperate, and we may be delusional, BUT AT LEAST WE AREN’T AS DESPERATE AND DELUSIONAL AS THESE CRAZIES.

With that in mind, I’ve decided to format this week’s GRTFL as a celebratory Bachelor in Paradise Delusion Power Rankings. Let’s get to it.

I mean, I don’t even know where to start with Elise. I guess I should start with how she reacts to going on a date with a dude and discovering that they have decent chemistry:

“Even though we have known each other for one week, literally, like, six days, that first night we were drawn to each other. He and I are connecting on so many levels, every level. I am falling in love with Dylan. I have never felt like this. I want this to last beyond Paradise, beyond just a fairy tale. We are on that path.”

IN LOVE! FAIRY TALE! NEVER FELT LIKE THIS! ON THAT PATH! SO MANY LEVELS! SO. MANY. LEVELS.

Elise insisted she was in love, though. Real love. The type of love that goes beyond a fairy tale, that lasts beyond paradise, that leads to, you know, making out with some other dude in the ocean and having him do “sexually amazing things” to you: 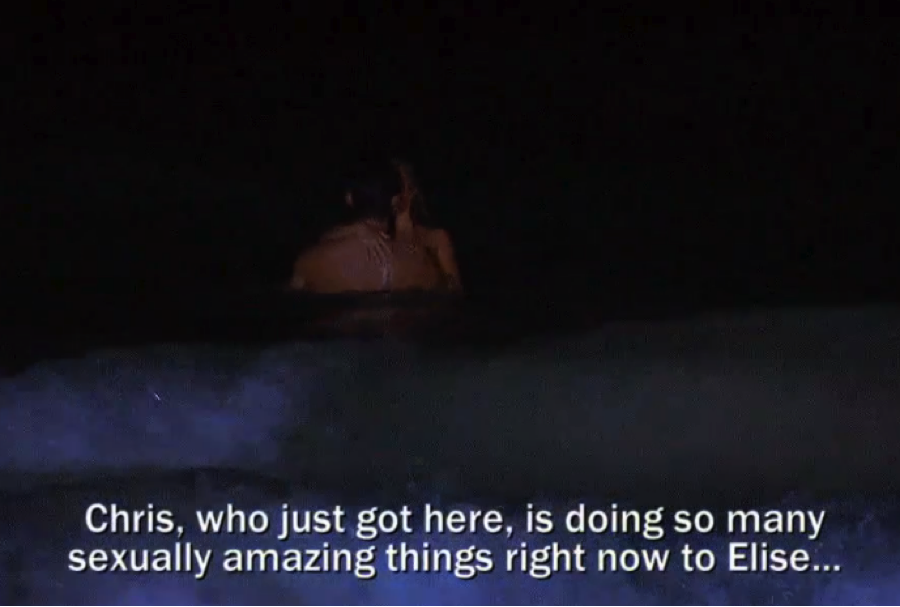 It’s OK, though. Elise had a perfectly adequate explanation when Dylan asked her what happened with Chris:

“Yes, a kiss was involved, but I was thinking about you the whole time.”

It’s cool, Dylan. Don’t worry. She was thinking about you the whole time! Right now, you’re probably thinking, Oh man, this Elise character really is delusional. But this is merely the tip of the giant delusional iceberg floating in the vast, coitusy ocean.

Naturally, Dylan, being a kinda-semi-regular human, drew back from the crazy-faced Elise after she fell in love with him and made out with another dude in the span of a couple days. He dropped some not-so-subtle hints to her, like: “You are like a great friend of mine so I think you should take full advantage of things that are happening right now … Chris actually likes you.” Translation: I DON’T LIKE YOU, CHRIS DOES THOUGH, DATE THAT GUY. Then, when she didn’t get the not-so-subtle hints, Dylan became a little more forward: “Again, I would be happy for you to go on a date with another guy.” Elise, G-string deep in her delusion, finally got the message, put everything in perspective, and reacted rationally: “He is sending mixed signals and he doesn’t know what he wants.”

Dylan told Elise that another dude “actually likes” her and insisted that he wanted her to go on other dates. Those aren’t exactly mixed signals; those are crystal-fucking-clear signals that Dylan wanted nothing more to do with Elise. Yet after all of that, what did Elise do? She offered Dylan a rose. And what did Dylan do? He turned it down.

If you think any of this discouraged Elise from thinking that she and Dylan will spend the rest of their lives together, then I’ve done a terrible job of detailing the depths of her delusion. This one’s special. Not quite AshLeeeeeee special, but then again, no one is AshLeeeeeee special. AshLeeeeeee is hot enough to almost pull it off, though.

2. Ryan Putz, the Production Guy at the Center of Balconygate

As teased last week, this episode gave us the payoff of the “Michelle K left because she was fucking one of the production bros” controversy, and it was par for the Bachelor in Paradise excellence course.

Here’s what happened: There’s a dude named Ryan Putz who works for the show, and Ryan’s particular brand of delusion is different from the actual contestants’ delusion: Ryan’s delusion has nothing to do with lack of self-awareness, intelligence, or love; Ryan’s delusion has everything to do with misjudging how far the balcony of Michelle K’s hotel room was from the ground below it. And that delusion cost him dearly.

See, Ryan and Michelle had what this franchise likes to call “a connection.” Meaning, they were fucking. Specifically, they were fucking in a hotel room when production knocked on the door. Not wanting to lose his gig (sleeping with someone from the cast is a no-no), Ryan jumped off the balcony. This is how it worked out for him: 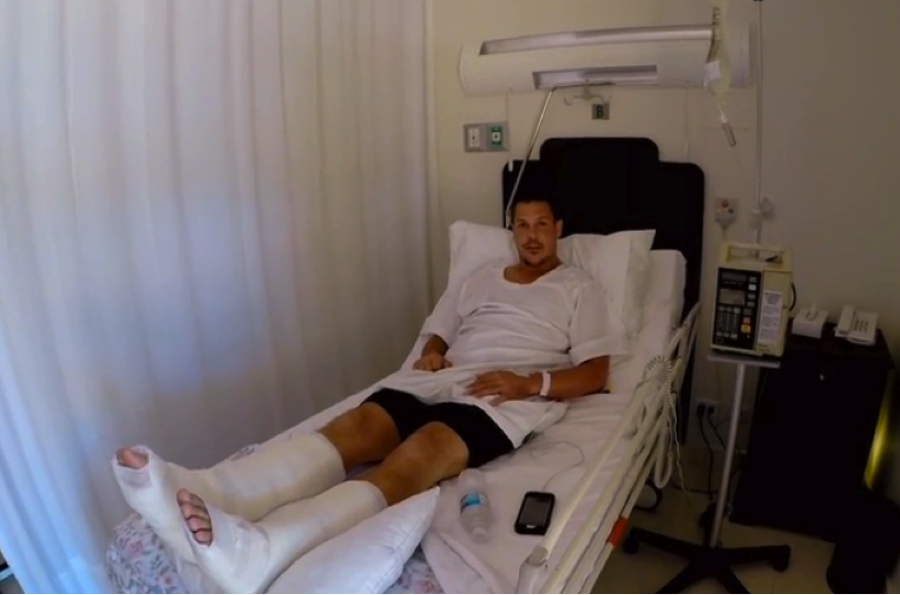 Poor Ryan Putz. The guy wanted to have a flingy-fling, and ended up with two broken legs and an embarrassing segment on national TV. In honor of Ryan and his formerly functional ankles, I’ve decided to make his story this week’s GRTFL Top Five. This week’s GRTFL Top Five is: the Top Five Best Quotes From the Ryan Putz Story, ‘Falling'” (sorry, I couldn’t resist), listed from “that’s kind of funny” to “you should probably end the column because it isn’t going to get any better than that”:

Michelle K: “I care for him, yes. He was a sweetheart for bringing me floss and handpicked flowers.”

I barely understand people who floss. I don’t get people who forget floss on a trip and then insist that they need it. Who are these über-flossers?

Production: “You need to speak to Chris. Chris is the guy.”

Michelle K the Über-flosser: “No he’s not, he’s just a host!”

Just a host? Chris Harrison, “just a host”? Don’t disrespect the underworked, overpayed, Chancellor of Foreverlove Chris Harrison like that ever again, Michelle K. Chris Harrison is the coiffed cupid who shits mistletoe and burps Neil Lane engagement rings. Bow at his sex alter or foreverlive without foreverlove … foreveralone.

Producer: “I was walking one of our other kick-offs to her room — that was Daniella — to speak with our psychiatrist.”

Producer: “Was this a good idea or what?”

Again, BWAAAHHAHAHHAHAHHAAAAAAAAAAH. Don’t worry, Ryan, I’m sure things will work out with you and the women who was looking for a husband on a reality show called Bachelor in Paradise. What could go wrong?

Maybe Graham should be no. 1. Is there anything more delusional than thinking tank top under blazer is a good look? 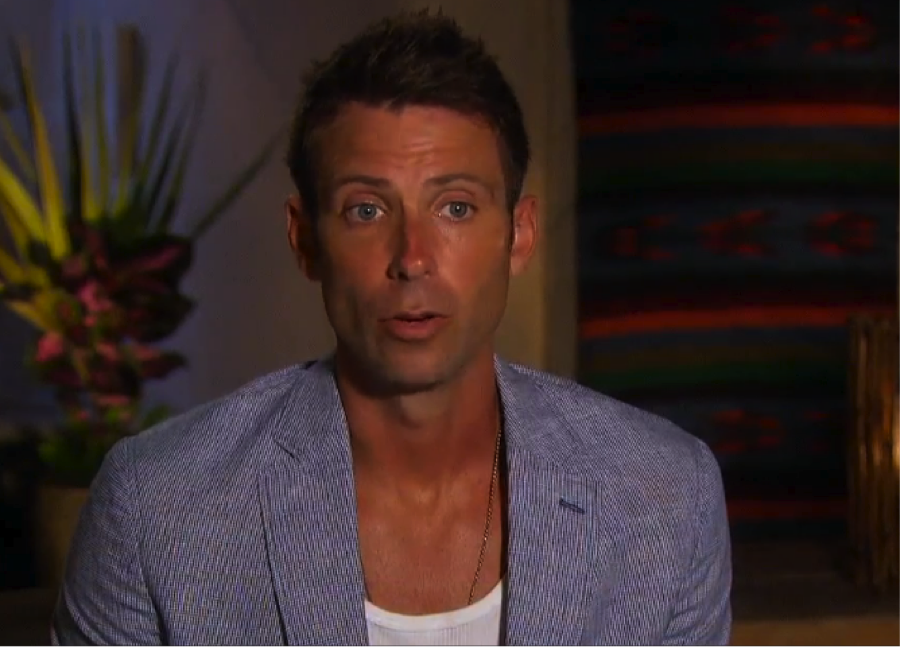 Marcus: “I just got out of a relationship with Andi.”

Dude, you were not “in a relationship” with Andi. You were “on a reality show where you took the woman you were trying to woo to your hometown and brought her to a nightclub in the morning and then stripped for her.” You were just as much in a relationship with Andi as the bros who got kicked off Singled Out in the ’90s were in relationships with Jenny McCarthy. 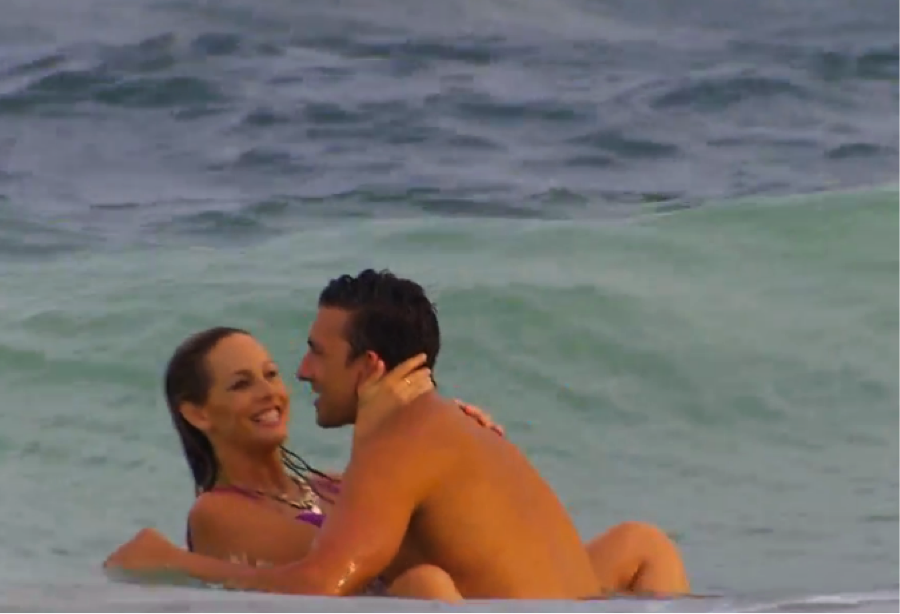 Clare said she “felt his connection” in the ocean. By “connection,” she meant the deep spiritual partnership that bonds man and woman together … oh, wait, no she didn’t; she meant “boner.”

6. Anyone Who Thinks Sarah Is Nice

Everyone talks about how cool and sweet Sarah is, but she’s actually kind of mean. Every time she does an interview on the show, she seems to throw a diss. Don’t think so? Consider some bites from ONE episode:

On Elise’s Rose Ceremony Speech: “I don’t think the speech and all that was necessary … and nobody understood.”

On Clare: “I know Chris’s personality and I’m getting to know Clare’s, and I am not surprised that Chris is moving on.”

On Elise: “What started out as Elise trying to make Dylan jealous turned into something that she really is going to regret.”

Whenever Sarah is in an interview next week, ask yourself whether she’s being nice. The answer will be “no” 100 percent of the time.

“Some water spilled while I was brushing my teeth and your bag was right there.”

When someone spills water on a bag, that person can (a) wipe off the bag, or (b) search through the bag and share all the contents with every breathing human around. Marcus chose the second option and acted like it made sense.

I can’t decide what’s worse: Graham’s “tank top under blazer with a chain” look or Marquel’s “loud beach-theme printed tee under a blazer, with a lapel pin, AND a pocket square, AND gun-range glasses” look: 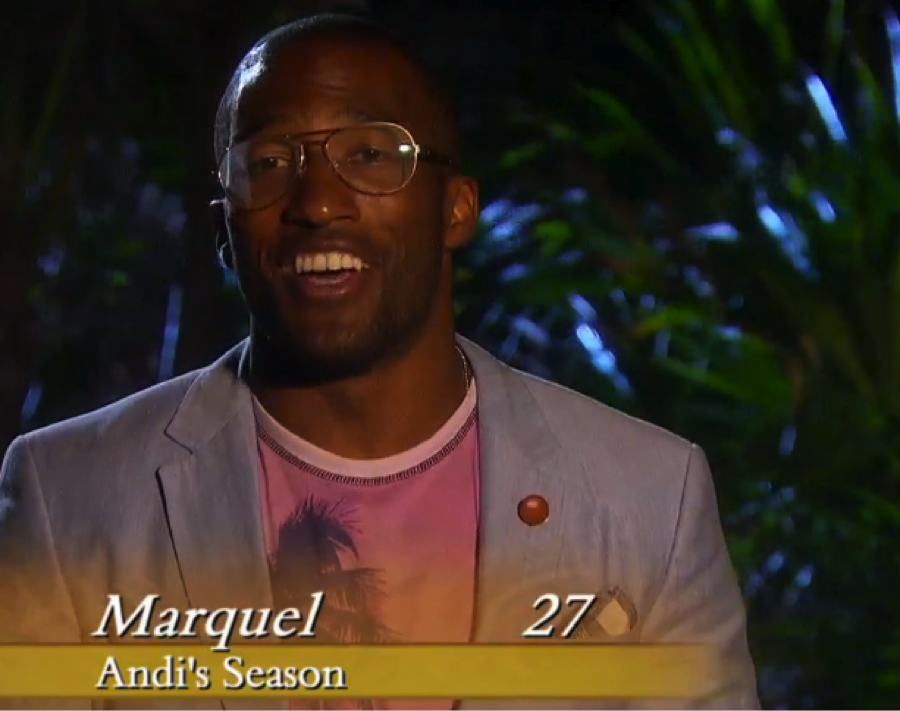 When Ben’s love letter from his GFBH came, Michelle Money (can we confirm that this is her actual given name?) freaked out and shamed Ben all the way back to wherever people like Ben are from. None of that was particularly delusional, though; the delusional part was the statement Ben made on the way out: “Coming here was a mistake. Good-bye, Hollywood, I am done with TV. Done.” “Good-bye, Hollywood”? Dude, you aren’t accepting a lifetime achievement award at the Oscars, you got booted off a reality TV show by a woman whose last name is Money. Also, did you really pack everything you brought in a Ninja Turtles backpack and leave without a shirt? 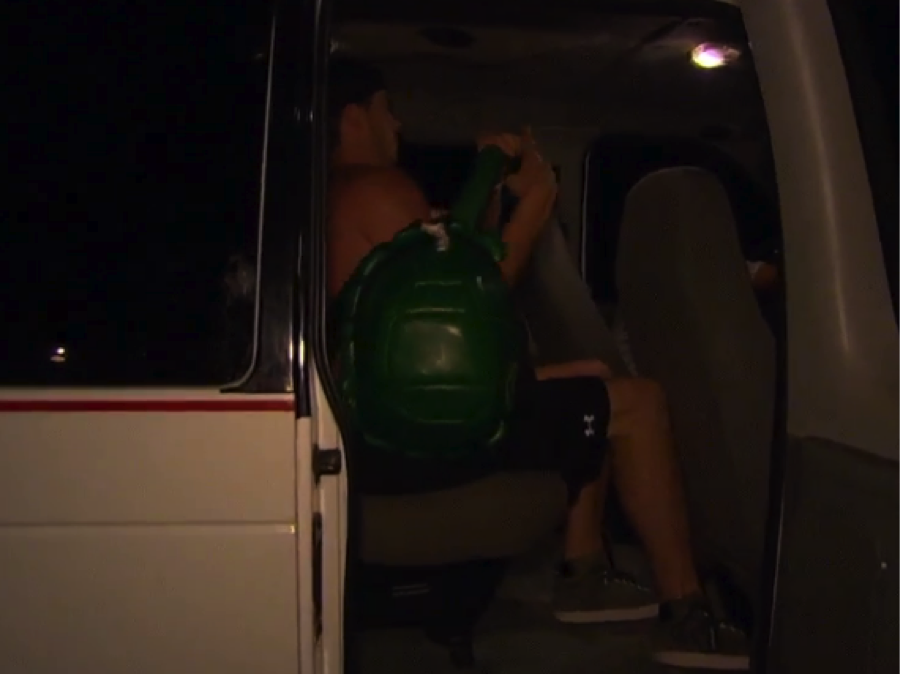 Everyone watching this show writes it off as a “guilty pleasure” or “something that my spouse watches” or says, “I watch only because everyone else in the office does,” but you’re all lying to yourselves. This show is fucking fun, and you know it. Embrace it. Own it. This show is the tank top under your blazer, and this show is worth jumping off a balcony for, so jump off that balcony and into the ocean with this show and coitus your way to a bond that will last beyond paradise. You won’t regret it.

Check back next week for the triumphant return of GRTFL (and Right Reasons) favorite Below Deck, listen to the Right Reasons podcast, and, as always, enjoy your weekend.