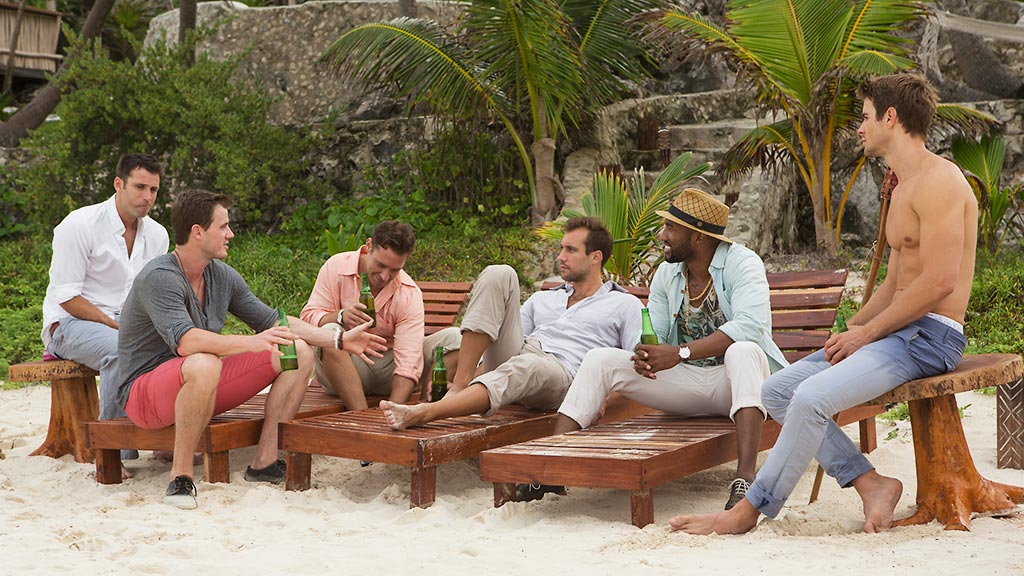 This week of reality TV was dominated by the introduction of Bachelor in Paradise, a show so lowest common denominatory that we at Grantland were compelled to give it the full Shootaround treatment. ABC’s new psychotic sexfest in seclusion wasn’t the only meat on the reality TV bone, though: Bravo trotted out the latest in “Rich Women Arguing” programming, while Naked and Afraid continued to push us toward the inevitable Naked Network. If there isn’t a Naked Network in five years, the entire supply-and-demand foundation of our economic system needs to be reevaluated.

But before we can talk about the Naked Network, we need to start with the benchmark accomplishment for our species:

Now that we’re five days removed from the premiere of the latest Chris Harrison–helmed love journey, we have the proper perspective to respect the evolution of show-sanctioned ocean coitus. The reason this show is so much more exciting than the traditional Bach offering is that we’re not attached to a singular voice. In the traditional format, Bach producers always cast an attractive but boring sun around which the rest of the human love planets can revolve, which leads to three months dominated by the singular voice of the Boring Bach. But Bachelor in Paradise has the antidote: a show full of lunatics.

So, this week’s GRTFL Top Five is The Top Five Things That Indicate There Are No Sane Humans on This Program, listed from, “Oh, that isn’t that crazy” to “I’m worried for Chris Harrison’s safety:”

5. Elise’s G-String Tan Line: Nothing says “demure young woman looking for a life partner” than a super-high, super-pronounced, super-visible G-string tan line. If this is an artificial tan, why not go tan naked? If this was procured in public, was this how Elise was originally cast for this show? It must be. I’m sure the casting producers go to beaches with instructions to get the contact info for all women wearing G-strings, because they’re bound to be perfect for the franchise.

3. AshLeeeeeee Being “the Hot, Possessive, Crazy Chick” We All Know and Try to Avoid: When Graham accepted Clare’s date invite, Ashleeeeeee pronounced, “I am so mad at him. He couldn’t be loyal more than 24 hours.” Then my wife and I had this exchange:

2. Raccoon Gate: Look, everyone knows that Clare didn’t actually have a conversation with a raccoon. BUT, that this is even up for debate tells you everything you need to know about Clare.

1. “The Next Time On:” As far as I can tell from the preview, next Monday we’re going to witness a bro from the crew, caught mid-coitus with Michelle K., jump off a balcony and learn what it feels like to be Paul George. I’m easily more excited for Crew Guy’s Legs vs. Balcony Jump than for any matchup on the NFL schedule.

Look, I love naked programming. Whether it’s watching a dude named “Justice” pool grope a porn star on Dating Naked or watching people try not to die on Naked and Afraid, there’s something about the lack of fashion that I find fascinating. After watching every episode of Naked and Afraid, I’ve come to three solid conclusions about our species: (1) It’s REALLY HARD to make fire. (2) Men are assholes. Not a single guy on this show has ever asked his female counterpart, “Hey, what do you think?” (3) EVEN AFTER NOT EATING FOR 21 DAYS, THESE PEOPLE ONLY LOSE 12 POUNDS. Think about that as you try to get your beach body before the summer ends.

Bravo has a new show, a fish-out-of-water story about a “Jersey girl” named Jaime Sullivan who’s married into a family in the wealthy community of Mountain Brook, Alabama. It’s full of stereotypes about both Jersey and Alabama, full of the same fake “can we pull off this event in time” bullshit that every reality show now has, and full of rich women arguing. This show not only bores me, it concerns me. It concerns me because Bravo has stopped innovating.

Oh wait, what was that? Below Deck is coming back? HOPE RESTORED.

Enjoy your weekend, listen to The Right Reasons podcast, and check back next week so we can discuss the results of Crew Guy’s Legs vs. Balcony Jump. Reality TV is the best.

Video on Demand Report: ‘Divergent’ Is Yet Another Teen Dystopia Movie