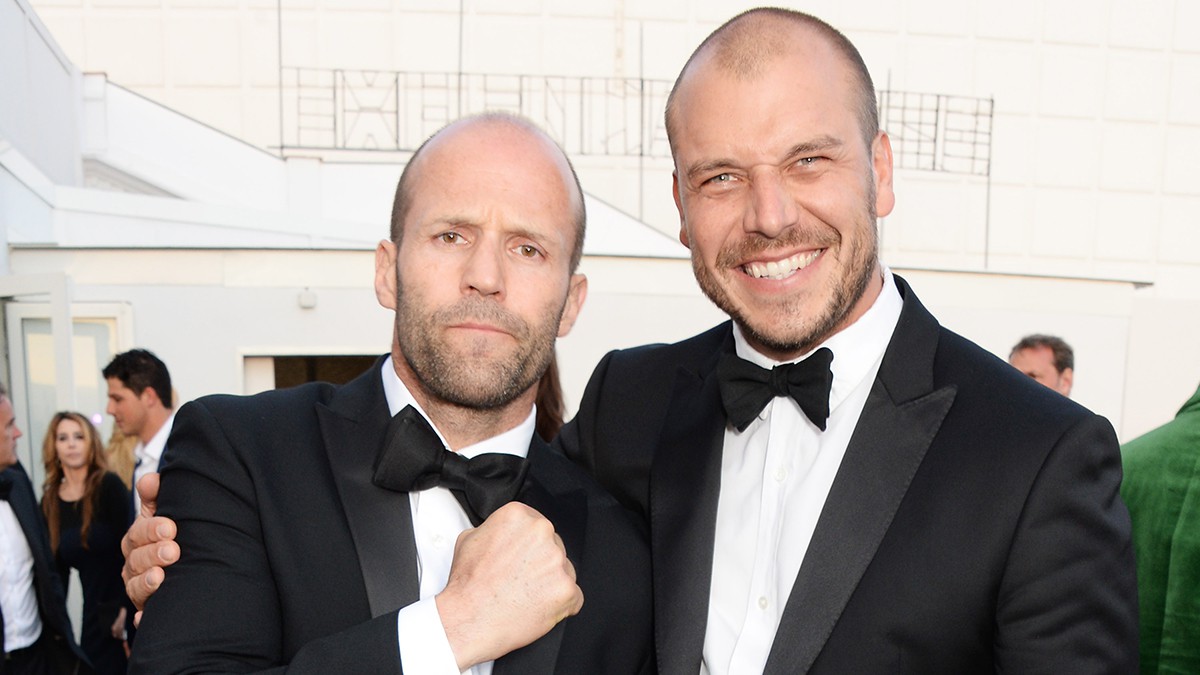 When Sylvester Stallone’s Expendables 3 character, Barney Ross, realizes his latest adversary, Stonebanks (Mel Gibson), packs more heat than even old-timer Lee Christmas (Jason Statham) can handle, he hits up his longtime friend Bonaparte (Kelsey Grammer) to wrangle a fresh-faced team of ass-kickers. The Expendables: The Next Generation recruits are young, fast, agile, and can work those newfangled computer thingies. (But, thankfully, they still have silly names like “Mars” and “Smilee.”) Guys like Toll Road (Randy Couture) and Gunnar (Dolph Lundgren) have battle scars to prove their valor, but a fully stocked résumé won’t outrun 18 incoming sniper shots. Age matters in the trenches.

That goes for blockbuster warfare, too. When Stallone handpicked Patrick Hughes to direct The Expendables’ third installment, the 36-year-old director had one feature credit to his name: Red Hill, a 2010 Australian western indie starring True Blood swoonthrob Ryan Kwanten. By August 2013, Hughes found himself on the Bulgarian set of an eight-figure Hollywood blockbuster, navigating the clown car of action vehicles. The way Hughes describes it, Stallone handing him the keys to the franchise wasn’t an invitation to live under the star-writer-producer’s thumb. This was a Barney Ross move. The Expendables 3 needed a whippersnapper. Hughes was there to keep Stallone’s rowdy team in check.

“Day one, take one I think I had eight of ’em lined up,” Hughes says. “I had a megaphone and told ’em where they were going to stand, what we were going to do, and how it was going to go. [But] as soon as you call ‘cut,’ they all start talking and after a while, it just felt like a kindergarten class. I’ve got a 5-year-old. You’re just trying to wrangle them all. You’ve got to use that megaphone a lot.”

Hughes self-identifies as a big, brassy Australian hungry to make his movies. Starving, really. To realize Red Hill — a brooding drama of chiseled-down cowboy archetypes, shadowy neo-western vistas, and brutal violence — the director threw his own cash into the project. The frustration of his movie stalling time and time again overtook his patience for traditional funding. He took a mortgage on his house, praying to God someone with industry influence might come along. The Berlin Film Festival was a breakthrough. Sony Pictures bought the film. Calls came in from Hollywood. DVD screeners floated around town. One dropped on Stallone’s lap.

“I got a call two weeks after Berlin that Sly had a screening of the movie and he can’t stop talking about it and he’s a huge fan,” Hughes recalls. “I was like, ‘Yeah, that’s awesome. And it’s completely useless information!’”

Weeks later, encouraging buzz solidified into a meeting with Stallone. The aging action star took to Red Hill’s gnarly set pieces. Maybe Barney Ross had a little Cormac McCarthy–style gunslinger in him, too. He sensed his own legacy in Hughes’s debut. The director says it’s there; on set, they referred to Red Hill as Rambo in the High Country. “I’m a huge fan of the western and action genres, but when you pare those stories down and the low roaring starts, it always comes down to the moral code of the hero,” Hughes says. “That’s what those stories represent, and that’s what [Stallone] was certainly drawn to.”

It didn’t hurt that Hughes revered the films The Expendables franchise always thought it was aping. Stallone was in deep writing and directing the first film in 2010, paying homage to his own ’80s shoot-’em-ups without the ability to stand back. Action veteran Simon West was a logical choice for The Expendables 2. But in Hughes, Stallone found someone who grew up dreaming of an Expendables-style mash-up. The first film Hughes made with his childhood Super 8 camera involved a stop-motion animated Rambo action figure setting fire to a Han Solo action figure. It ran 23 seconds. (“It was a terrible film,” Hughes admits.) The Expendables 3 could benefit from that same passion. Hughes had a chance to go wild with real-life action figures.

“When I initially sat down and discussed the project with him, we both thought the first one was too serious and the second one had run into parody. We wanted to strike a balance between those two and give it thematic weight,” Hughes says. He pushed Stallone to open up the action, both in script and effects. Hughes didn’t want to make a movie that was “just guys spraying bullets.” If he was going to recreate the ’80s style of filmmaking, he had to do it with practical set pieces with plenty of explosions. “We blow up every vehicle possible — tanks and cars and bikes and airplanes and choppers. I was looking for a different aesthetic. The opening train attack is very dynamic. The temptation there is to do it all CG, but no, let’s buy a train and get a chopper and do it for real. Let’s blow up a fucking building.”

For Hughes, success was all about rapport. His ingrained admiration for the pillars of action cinema made cajoling the cast into following his orders easy. “I’d be like, ‘Han Solo’s gonna walk in and then, Rambo, you’re gonna come over here, and then you turn around and Terminator is going to be there, then we’ll pan over to reveal Desperado.’ They loved it.” Art imitated life. Like Barney passing the torch to the Expendables 2.0, Stallone’s sardonic mentor role extended to Hughes.

“I remember we’re with Mel and were [shooting] a scene where Sly only had two lines. I wanted him to lean forward to give a little bit of intimidation in terms of body language,” Hughes says. “By the third time I said, ‘Mel, that’s perfect. Sly, you keep forgetting to step forward, brother. You need to step forward on that line.’ And Sly goes, ‘If you give me that piece of direction one more time, I’m going to take my gun out and pistol whip your fucking face!’ So I tell ’em, ‘You wanna rumble, Rocky? Why don’t you get out of the van and say that?’ And my eyes turn over to Mel and he looks utterly horrified, thinking, ‘What the shit is going on?’”

But directing an Expendables installment can be hell, no matter how much Stallone likes you. Hughes’s biggest challenge wasn’t stepping up from the indie world to shoot massive action sequences — it was keeping his head straight during a shitstorm of scheduling. Rarely could every actor be on set at the same time. It forced Hughes, Stallone, and the film’s two additional writers, Olympus Has Fallen duo Creighton Rothenberger and Katrin Benedikt, to design a story that took into account actors’ schedules. Which resolved only half the problems. “Some sets, we went back and shot them 10 times, because I’d have Arnold in house but I didn’t have Antonio [Banderas], so you’d have to shoot it with Antonio’s double, then come back to that location and put Antonio back in the same, but I wouldn’t have Arnold, so we’d need his double,” Hughes says.

“I think 24 hours before we shot the movie, Terry Crews was supposed to die.” Hughes can’t help but laugh. “Then [Stallone] decided he was going to live. It’s a constantly moving target. It doesn’t stop. Even on set, he’s writing, writing, writing.” The fluidity worked in Hughes’s favor. He’s beside himself that, in the swell of The Expendables 3’s bombast, he managed to tuck in a few emotional beats. As Galgo, the team’s motormouth acrobat, Banderas brought comic relief and one of the film’s only true character arcs. And then there are the glorious moments of subversion: Late in the film, Schwarzenegger’s Trench and Jet Li’s Yin Yang get cozy at the Expendables’ go-to bar. Stallone ribs them: “Get a room.” But then the two seize the moment, nuzzling each other while laughing it off. Did the former-Governator just silently flip off Prop 8? Are two of the Expendables together by the end of the movie? “I believe they are,” Hughes says, like he just got away with something amazing.

Stallone’s endorsement is already paying off for Hughes. As The Expendables 3 rolls into theaters, the director is prepping his next blockbuster: a remake of the 2011 Indonesian fight film The Raid: Redemption. He describes his version as being in the vein of Black Hawk Down and Zero Dark Thirty, signaling major departures. He’s casting the 12 integral roles of the film’s ensemble, with sights on shooting early next year. “After that, I’m pretty sure I won’t do a movie with ensembles, camouflage, and guns for a while.”

Hughes understands what he was brought in to do for The Expendables 3. “It’s Sly’s franchise. I’m a part of the puzzle. It’s not a personal movie, it’s a big studio popcorn spectacle.” But while it may not be the most prestigious directing gig in the world, Hughes made the movie he wanted to make. And it was fun. “If you can get paid for it, it’s a win-win situation,” he says. Setting off explosions without taking a mortgage out on your house? Hughes just came to Hollywood and fulfilled the American dream.