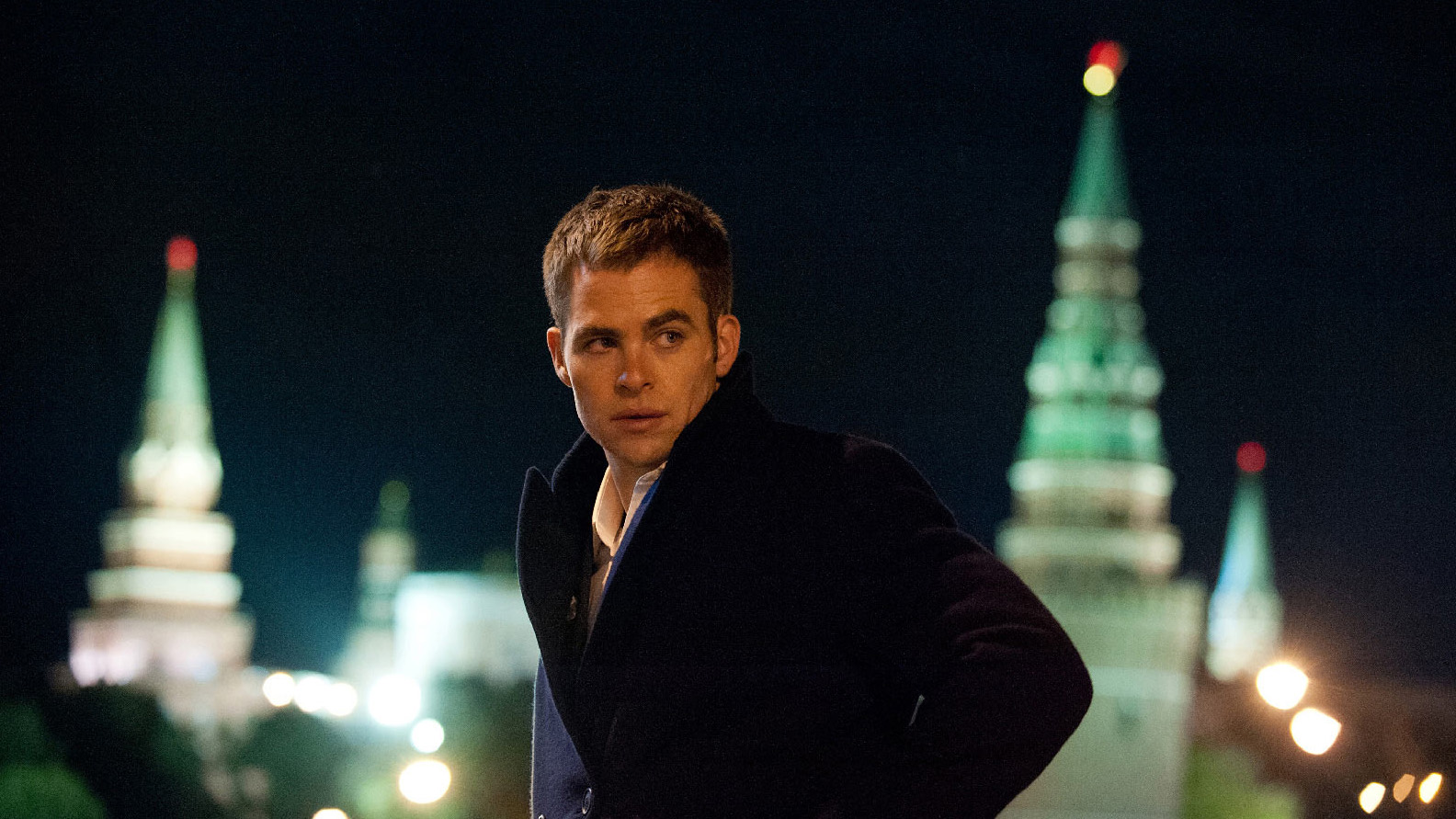 Never forget: In the last Jack Ryan movie, 2002’s The Sum of All Fears, Austrian neo-Nazis procure a loose Israeli nuke misplaced during the Yom Kippur War and detonate it inside the “Baltimore Forum” during the Super Bowl. This was less than a year after 9/11 — possibly too soon tastewise for a popcorn movie about terrorists leveling Baltimore, inarguably an odd moment to reintroduce Tom Clancy’s two-fisted CIA-analyst hero, whose late–Cold War roots suddenly seemed like they were from a more innocent time. (In the novel, published in 1991, the stadium was Mile High in Denver and the villains were Palestinian, East German, and — you crazy for this one, Tom Clancy! — a Sioux Indian.) Fears starred Ben Affleck as a young, out-of-his-depth version of Ryan, unaccustomed to the field. Affleck, stepping into a role originated by Alec Baldwin and made iconic by Harrison Ford, seemed a little out of his depth, too. Matt Damon might have been more believable as a brilliant paper-pusher thrust into the line of fire, but he was busy making The Bourne Identity, which opened just one week after Sum and launched one of the most influential action franchises of the 2000s. Affleck went on to make Daredevil, and Jack Ryan disappeared from movie screens for more than a decade.

Director Kenneth Branagh’s re-reboot, Jack Ryan: Shadow Recruit, opens at the London School of Economics, where our hero-to-be (Chris Pine, in Vans and a hoodie) wakes up from a nap on the quad to discover that all the extras are nervously peas-and-carrotsing about what turns out to be the attack on the World Trade Center. Eighteen months later, now-Lieutenant Ryan is in a chopper over Afghanistan, and he and his fellow Marines are having the kind of jocular conversation about football you should never have in a military aircraft if you’re a minor character in a movie. In The Hunt for Red October, we hear about Jack surviving a helicopter crash and teaching himself to walk again, an indication that he’s tougher than his job description would suggest; Shadow Recruit actually follows him through the process, from triage to rehab at Walter Reed, where he meets and impresses both a third-year surgical resident named Cathy (Keira Knightley) and a CIA officer named Harper, played by Kevin Costner.

As if to banish all doubt that Jack Ryan began life as a struggling writer’s fantasy-self, characters in Jack Ryan stories are forever asking Jack Ryan if he’s the same Jack Ryan who wrote that brilliant paper on blah blah blah. When Harper first meets Jack, he compliments Jack’s master’s thesis about liquidity incidents in post-Soviet markets. When Jack asks how Harper managed to read a paper he never finished writing, Harper whispers “I’m in the CIA,” because apparently the shadow-recruitment process involves telling people that you’re in the CIA LOL JK but no for real though. “People don’t like you guys much these days,” Jack says. “Waterboarding, rendition.” Harper says that wasn’t his unit, that he’s just interested in making sure we don’t get hit again. As far as ethical questions about covert operations in the post-9/11 era go, that’s the end of that conversation. The movie isn’t interested in how issues like surveillance or torture or drone warfare might weigh on the conscience of a young spy. You could certainly argue that it wouldn’t be a Tom Clancy movie if it took up those questions, and that because it’s just a Tom Clancy movie it’s not obligated to do so; you could also argue that a movie that uses a shot of the smoldering Twin Towers as an inciting incident has forfeited the it’s-just-a–Tom Clancy–movie defense.

Either way: Cut to 2013! Jack is living in New York with Cathy, working undercover as a compliance officer at a Wall Street firm and watching out for suspicious transactions that may be funding terrorism. Instead he stumbles on a Russian oligarch’s plot to collapse the dollar and crash the U.S. economy, creating a second Great Depression. This is still Clancy’s universe, so of course sooner or later it all comes back to the damn Russians. “They’re still ideological,” Ryan’s boss at the investment bank warns him, “but their new ideology is money.” That’s a misdirect, though — Cherevin, the oligarch (who’s played by Branagh), turns out to be carrying a grudge and some shrapnel from his time fighting CIA-backed guerrillas in Afghanistan years ago. His ideology is ideology, and when he sets it in motion he says things like “We will avenge our mother Russia” and “America will bleed,” classic bad-Russkie lines to which Clancy himself would have tipped his USS Iowa cap. Cherevin turns out to also be plotting some terrorism of the old-school violent non-financial variety. I couldn’t quite figure out why, but I’m not an evil genius. Cherevin is supposed to be, although he falls for both the old bump-and-pickpocket-the-keycard trick and Cathy making flirty eyes at him over drinks while referencing Mikhail Lermontov’s “achingly desperate” Russian romanticism.

Cathy is having drinks with Cherevin because this movie flouts convention by letting the future Mrs. Ryan get involved in the cloak-and-dagger side of things as something more than a hostage, at least for a while. In the two Ford films, we’d sometimes see Anne Archer perform surgery to demonstrate that she was a worthy partner for Jack; in this one she proves it by risking her life. She comes to Moscow expecting to catch Jack with another woman and finds a gun in his hotel room instead. Cherevin finds out she’s in town and insists to Ryan that she join them for dinner. We’re supposed to believe that Harper and Ryan therefore have no choice but to put Ryan’s actual non-CIA-trained girlfriend in harm’s way. I don’t mean to harp on this, because giving a female character this much secret-agency in the manly world Clancy built is a brave and interesting choice. But a few scenes later, we find out that Harper’s support team on the ground in Moscow includes at least one female American, who is presumably capable of saying “Hi, I’m Cathy” when prompted. Could they not have sent her as Jack’s date?

Of course not. Cherevin has to take the real Cathy hostage so Jack can chase him. By this point Branagh’s starting to cut corners, sacrificing logic and believability to get to the big action set pieces faster. The scene in which Ryan figures out every detail of Cherevin’s plan takes about three absurdly hectic minutes of screen time. It also involves Jack ordering a room full of CIA computer jocks to check “Instagram, Facebook, Hopscotch, Reddit” for clues, because there’s always a chance that the terrorists have been hosting an AMA or applying the Valencia filter to their selfies. Cinematographer Haris Zambarloukos, who shot Sleuth and Thor for Branagh, gives the chases themselves an appealingly visceral, rough-and-tumble quality, so you almost don’t notice how derivative they are. But in John McTiernan’s The Hunt for Red October and the two Ryan films Harrison Ford made with Philip Noyce, the action was never the point. The moment you wait for in each one is the scene in which Ryan confronts a room full of disdainful authority figures and tells them they’re wrong and he’s right, which of course he always is, because he’s Jack Ryan, and when he says to retask the satellites, you retask the damn satellites. In Shadow Recruit there’s no time for a scene like that, and you miss it — it’s like Pine is playing through the Jack Ryan video game in “Easy” mode.

I didn’t think there was a point to Jack as a character until I realized this movie had missed it. As synonymous as Tom Clancy was with a certain kind of kiss-ass hawkishness, as steeped as his stories were in the culture of Washington and the military, they weren’t really political novels, and the movies aren’t political films. They use war and espionage as a context for fantasies about masculine hyper-competence, specifically the kind of competence that stems from experience. “The only people Ryan needed to impress,” Clancy writes in Red October, “were those who knew him; he cared little for the rest.” Those are the kind of words you use to sell Lincolns or Scotch or Viagra to consumers of a certain age who like to think they’ve learned a thing or two. Clancy’s career took off when Ronald Reagan called Red October “my type of yarn” and joked that the book was keeping him up late. But Jack Ryan became synonymous with airplane reading and business travel because Jack Ryan is really a middle manager’s fantasy. He’s a little older, he’s forever being brought onto some project that’s gone sideways, and with his superior skill set and hard-won insights, he’s going to show both the brass and the junior staffers what’s what — albeit in a quiet, unshowy way, because in Clancy’s world, the worst epithet you can hurl at someone is “cowboy.”

I’m aware that commercial and cultural forces require everything to be rebooted triennially with fresher, hotter stars. But this is the second time the Jack Ryan franchise has rejected a youth transplant. Maybe Jack is supposed to be old, a little weary, a man reluctantly rising to the occasion despite his cynicism about the system. Even Harrison Ford, probably the best Ryan we’ll ever get, sometimes seemed a little too much like a movie star in the part. In Clear and Present Danger, he grins and banters with the guards at the gates of the White House like he’s driving onto the lot at Paramount and walks into the CIA director’s office like he’s walking onto a yacht. But he also takes meals at his desk — a sad-looking sandwich in a plastic clamshell, a big stack of reference books about war, and a cup of bad coffee. Maybe the next Jack Ryan should be an actor who looks like he’d eat that bummer of a lunch without being bummed about it. Louis C.K.: Shadow Recruit, anyone?