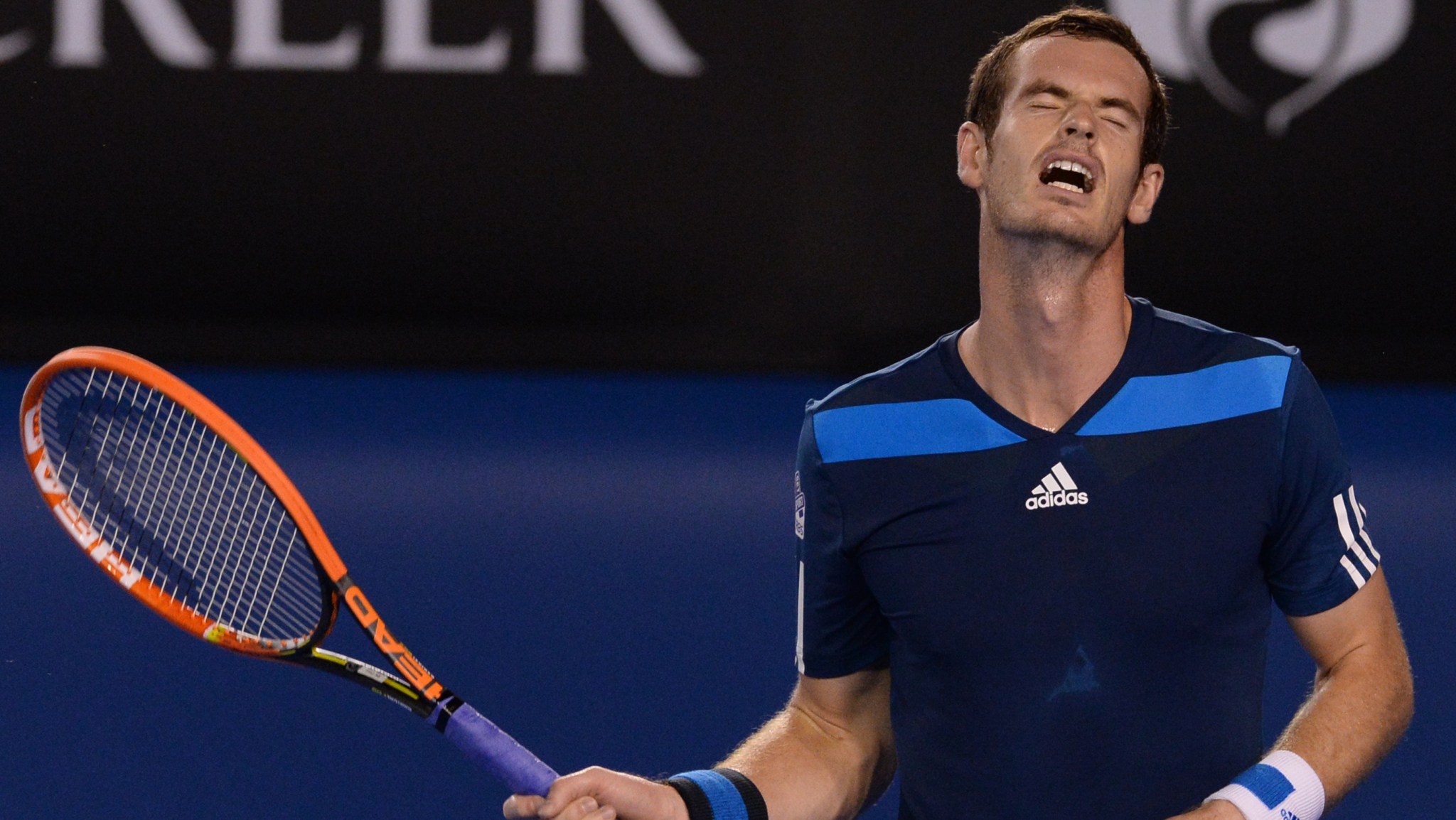 There’s a picture I can’t forget, a photograph of a crowd, countless pink faces and Panama hats. Everyone is turned toward the right. Some people have outstretched arms and cameras in their hands. They’re leaning toward something, a man, at the picture’s edge. It takes a moment to spot him, pale as he is and pressed by the crowd. He’s gripping a barely visible ledge. It’s Andy Murray. The people standing closest reach toward him, trying to help or just to touch him.

The Times of London used this photograph as a special cover for the paper the day after Murray won Wimbledon. In the upper left-hand corner was a 1936 quote from Fred Perry, the last British man to win Wimbledon: “I didn’t aspire to be a good sport: Champion was good enough for me.” In the bottom right-hand corner, under Murray, were the words “THE HISTORY BOY.” Andy Murray’s name appeared nowhere.

His name wasn’t necessary, of course, and not only because he was, at that moment, the most recognizable man in Britain. His name wasn’t necessary because none of this was really about Andy Murray. It was about history. I knew that, you knew that, everyone knew that. Still, it was hard for me to understand what a British man’s victory, after 77 years of defeat at the All England Club, meant for the nation and for its sense of itself. There were layers of national pride and national ambivalence and national insecurity, and also uncomplicated common joy, that I couldn’t begin to access. What could I compare it to? It was as if the entire United States were Chicago — and Chicago were actually a global superpower, and the Cubs’ losing streak inspired not only heavy drinking but collective anxiety about the global superpower’s decline. Or it was as if the 1980 U.S. hockey team that defeated Russia weren’t a bunch of unknown amateurs but one person — and the pressure of helping redeem the erosion of hegemonic power had been building on that one person for years, and a miracle wasn’t considered improbable but noisily demanded. I guess it would be kind of like that? Anyway, for a fleeting moment, it was a big deal. The BBC, as close a thing as there is to an official voice of the United Kingdom, recently aired a documentary called The Day We Won Wimbledon. We!

After we won Wimbledon, Murray spent a few months coasting, playing but barely. It was clear that he was emotionally and physically exhausted. Finally this fall he had minor back surgery. The British press, for once, seemed perfectly happy to give him a pass going into the Australian Open, and so did everyone else. Besides, Murray was already History Boy. He had won the U.S. Open, ending a drought of major titles won by British men that had begun before World War II, and then he had won the major that mattered. He had done what would define him. He was “Champion.” What else could he aspire to? 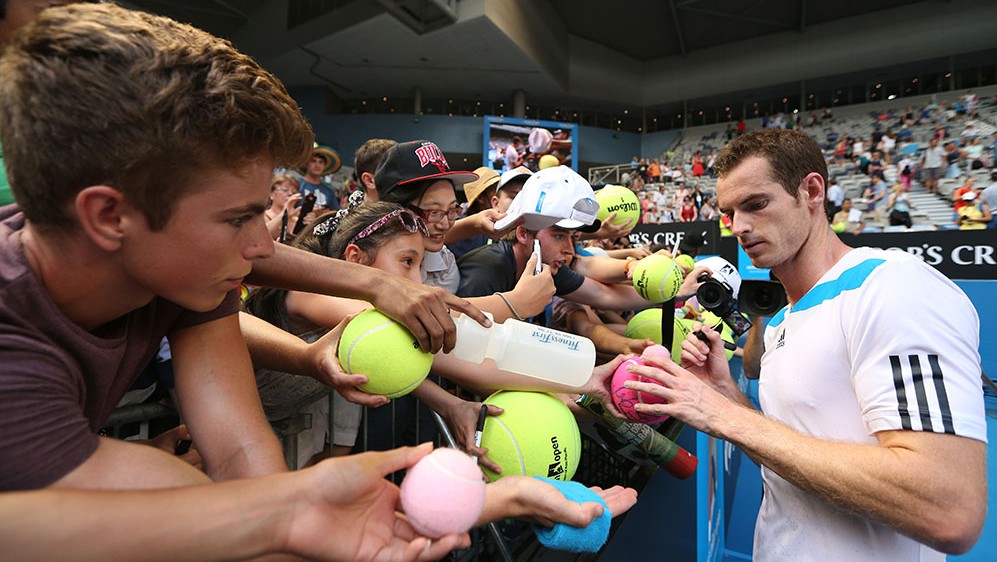 I’ve been wondering what winning Wimbledon will mean. Not for history (or pseudo history), but for Murray (or pseudo Murray).1 Obviously, he has milestones to pass. He can become no. 1. He can defend his Wimbledon title. He can pile up Grand Slam trophies. He can have a long career ahead of him. He is 26 years old. But when 2014 began, all that seemed … if not irrelevant, then unimportant, more desirable goals than true desires. Maybe it’s always been this way when we talk about Andy Murray. Maybe Murray has never seemed anything except the man who would be — or who would fail to be — the man by whom Wimbledon was won. Murray himself was kind of a blank.

Obviously, this wasn’t due to a lack of information. Every little fact about his life was studied. There were profiles and features and biographies and TV specials. There was (and is) a press corps more or less dedicated to reporting his every move. And yet … maybe it was his facial expression, which seemed to move between neutral and pissy and really pissy. You could never tell if he was happy, not even after he won the U.S. Open. You could only see that he was a raging mess of nerves and doubt, while the top three showed nothing but confidence. Murray was an incredible athlete, an incredible player, but he could be thrown by a feather. He complained and grimaced and cursed. Then there was the matter of his style, which didn’t have the balletic grace of Federer, or the tremendous energy of Nadal, or the slick horizontality of Djokovic. There were a lot of ways to describe Murray’s game, but the word you heard a lot was junky. He had a complicated relationship with the press. It sometimes seemed like he didn’t want any of this — not the attention, the pressure, the duty to win. He had been assigned a role and at times seemed to resent it. This is totally understandable. But we don’t like to give our public figures private lives. The moment when people seemed to love him most was the time he lost to Roger Federer and cried on the court. It was seen as a sign that he was human — as if his wish for the privacy of his emotional life were not.

Since he won, a tiny part of me wondered if he would keep winning. There shouldn’t have been any doubt about his commitment or his competitiveness. You do not become one of the top players in the world without an excess of both. Murray has already proven that he has one of the best work ethics in the game. He trains hard. He fights relentlessly. But I was stuck in my preconception. Federer plays like he was born to win. Rafa plays like he would die if he didn’t. Djokovic plays most brilliantly, and most demonically, when his chances are worst. Murray used to look like he’d rather be doing anything else other than hitting a tennis ball. He’s not like, say, Laura Robson, the top British woman, who is outgoing and luxuriantly beautiful and, though ranked outside the top 30, likes to play big players on big stages. In the movies, Laura Robson would be played by Princess Kate. After Murray won Wimbledon, I joked with friends that Murray could now leave Wimbledon to Laura, and everyone would win.

Murray has a new role to fill, of course: Andy Murray, global brand. In the last six months, he started a management company (called 77). He trademarked his name. He got a haircut. He looks less scruffy, less feral than he used to. He looks like a man who would wear a suit well.

What would he look like on the court? The pressure was off. “I know now that, if I finish playing tomorrow, I’d be content,” he told Neil Harman of the Times. “I wouldn’t be concerned about what I’d achieved or things I could have done or been able to do, whether my tennis wasn’t good enough or mentally I wasn’t good enough or whatever.”

In his first tournament after back surgery, the Qatar Open, Murray lost to Florian Mayer in the second round. With so little match play coming into Melbourne, he played down expectations. “It would be unrealistic to expect to win the Australian Open,” he said, “but I may start to feel better if I can get through a match or two.” I half-expected him not to get through a match or two.

Not only did Murray win his first two rounds, he won them playing phenomenally well. Against Go Soeda in the first round, he hit the ball cleanly, showed a range of shots, dictated points, and moved with a fluidity and ease that I’m not accustomed to seeing from him. As importantly, he won quickly, 6-1, 6-1, 6-3 — in temperatures so hot that water bottles and shoe soles were melting on the court, a day so hot that a Canadian qualifier hallucinated and then passed out.

In the second round, against Vincent Millot, Murray won the first two sets quickly before going down 1-5 in the third. Then, apparently, he stopped messing around. Murray won the final 23 points in a row to win the match. It is almost impossible to overstate how rare and hard that is. He did not lose a point for more than five games in a row. Twenty-four points wins a set.

None of this might say anything, of course, about how his surgically repaired back will hold up over the course of two weeks, or how he might look against better competition than Soeda and Millot. His play so far could mean nothing if he has to play Nadal — or if he faces Federer in the quarterfinals. But he is playing like he can win, like he wants to win. He seems to be playing … playfully. He’s been acting more playfully, too. When the BBC named him Personality of the Year, his sponsor, Adidas, ran a campaign with the caption, “Not bad for a man with no personality.” During a Twitter Q&A, someone asked what he thought was the most boring thing in tennis. He answered, “my voice?”

The story might change once he goes deeper into majors. The pressure will build. He will always be a public figure; he will never escape that. People will always project what they want onto him. I will, too.

But whatever the story is will be different. He will have more of a say in his own story now. “Those words you were once branded with, be it ‘loser’ or ‘choker,’ they can’t really use anymore,” he told Harman. Murray has plenty of motivation. He’s ready. For what? He is already “Champion.” But we may be about to find out what kind of sport Andy Murray will be.