Video on Demand Report: Breaking News — ‘Anchorman 2’ Is on VOD 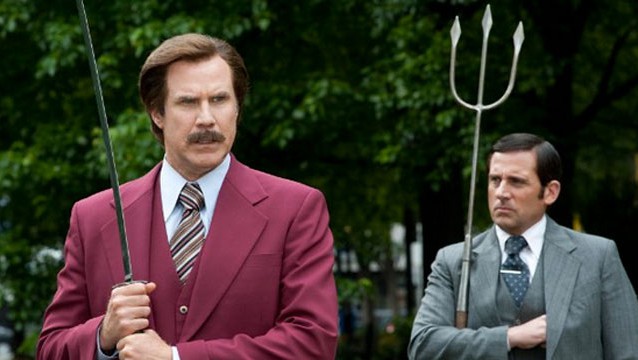 In Anchorman, local news anchorman Ron Burgundy was confronted by the changing world of 1970s San Diego. Eventually — though not without a fight — he came not only to accept that a woman could read news on TV, but he married the female interloper! How to raise the stakes for the sequel? Bring us to the genesis of 24-hour cable news!

When Ron gets fired from his network co-anchor job, his marriage to Veronica Corningstone falls apart, along with his life. Things are looking grim until Ron gets headhunted for a crazy new job at a cable news network, which (naturally) leads him to reunite his old news team. But when they get assigned a slot in the verrrrrry early morning, the crew has to find a way to get attention: Happy stories, sensationalistic stories, and high-speed chases are the order of the day. So much for Ron’s integrity? Which he had so much of before?

Anchorman 2 feels a lot longer than it is, particularly the draggy third act, when Ron has to recover from a series of setbacks. But at home, you can fast-forward the boring parts and jump straight to the bits that are reboots of segments you loved in the original. An unrated version is also available, so maybe the gags will be funnier with more swearing and, perhaps, boobs.

Wesley Morris: “Anchorman 2 comes close [to pushing shtick somewhere surprising] exactly once, with an all-star climax meant to personify the toxic glut of stuff on cable competing for eyeballs. But that sequence is just a badly staged remix of the biggest scene in the first movie. It’s a joke that doesn’t need to be told in a movie. It’s one that belongs on a website, probably the one Ferrell and McKay created for short-form hilarity, Funny or Die.”

Between this and Man of Tai Chi, should we assume that Keanu Reeves is only making movies in Asia now? Full of actors who don’t really speak English yet have English dialogue? And also with traditional fighting styles? Fine, two films doesn’t make a trend. But still.

Reeves stars as a “half-breed” slave turned samurai in 18th-century Japan. There’s some business with the forbidden love between his character Kai and a feudal lord’s daughter, but probably all you need to know is that it was one of Universal’s biggest bombs last year.

Wesley Morris: “Whenever someone talks here, the film cuts to whomever that actor is addressing or uses a wide shot that makes it hard to see who’s speaking. More than once an actor just puts his hand over his mouth. This becomes the same thing as sticking a sofa in front a pregnant actress on TV.”

The premise of a crazed killer terrorizing kids at a sleepaway camp in the woods is nothing new, as the millions of fans of the Friday the 13th franchise could tell you. But what if instead of a wilderness camp, a killer was going after the staff and performers at a theater camp??? Could the result be the first true horror musical? (We all know The Rocky Horror Picture Show doesn’t count.)

Available on VOD in advance of its theatrical release, Stage Fright is the story of Camilla Swanson, who wants to follow in her late mother’s footsteps and become a Broadway performer after her mother’s own career was cut short by her … murder. But when Camilla gets cast in The Haunting of the Opera, the show her mother was supposed to have starred in, things start to get weird/killy.