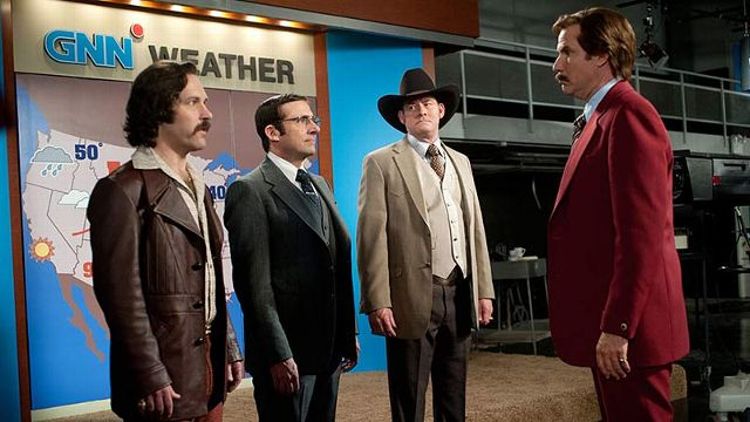 You can tell when an actor adores a character, because breaking it becomes tough. Will Ferrell loves being the idiot anchorman Ron Burgundy, whether he’s in a movie or not. Since the fall, he has donned Burgundy’s burgundy three-piece suit and mustache to sell Dodge Durangos in TV ads. Ferrell has been doing Burgundy on Conan, in teasers and trailers for Anchorman 2, on the covers of ESPN The Magazine and Rolling Stone. He has co-anchored a Saturday newscast in Bismarck, North Dakota. He has provided live color commentary at the Roar of the Rings curling event in Winnipeg. He has interviewed a good-humored Peyton Manning on ESPN.

In Washington, the actual journalism museum — the Newseum — has an Anchorman exhibit with props, costumes, and a re-creation of the film’s news desk, where visitors can sit and take a picture. From the Los Angeles complex that houses Staples Center and Nokia Theater, you can see enormous murals for three of the news dorks from the Anchorman movies. They’ve each been grafted onto the side of a tall building. Ignoring them isn’t an option. That’s how tall they are. But they’re funny. Ron, for instance, looks as big as a Japanese movie monster coming to attack your city. He’s Newszilla.

This kind of promotional campaign feels unprecedented for a comedy as lousy as Anchorman 2: The Legend Continues. It’s a matter of inverse proportions. The commercials and television appearances aren’t quite advertising the movie. They are the movie. The first film — 2004’s Anchorman: The Legend of Ron Burgundy — was set mostly in the news-free world of a San Diego station in the 1970s. It quotably mocked what it saw as an era of vanity, sexual buffoonery, and chauvinism. Most of it was random, but a great deal of that randomness was affixed to a couple of very funny ideas that kept most of the actors harmonized, particularly around the breakthrough of a woman entering a predominantly male playground as their equal.

That movie was a battle of many things, among them a battle of the sexes, between Ron and a new co-anchor named Veronica Corningstone (Christina Applegate). Even though Ferrell and his creative partner, the director Adam McKay, didn’t give Applegate as much comedy to play with, it was amusing watching Applegate fight Ferrell for laughs, mostly by not appearing to fight him at all.

For the sequel, it’s the early 1980s, and they’re married parents doing the news in Manhattan. Veronica is promoted to anchor the evening news on her own. Ron’s outraged, leaves her, but some time later is offered a job at a 24-hour cable news start-up called GNN. He rounds up the old gang of nincompoops — the violently dim weatherman Brick Tamland (Steve Carell); the conceited features guy Brian Fantana (Paul Rudd); and the misogynistic, closet-case sports reporter Champ Kind (David Koechner) — and brings them to cable. This time the air around the gags is stale. The four of them sit reunited in a rolling Winnebago setting up a joke (hey, what’s this scorpion doing here?) that culminates with the van doing rollovers in the slowest possible motion. It’s the first of many bewildering set pieces.

Sadly, Applegate is missing for most of the movie — Veronica is shacked up with Greg Kinnear, totally committed and perfectly costumed as a sensitive shrink. But because everything in a mindless sequel must be duplicated and redoubled, the first movie’s sexual nonsense has been relocated. Brick spends the movie with Kristen Wiig, who plays a secretary who might be dumber than he is. And Ron winds up sexually harassed into a relationship with Linda Jackson, the channel’s humorless vixen producer who’s black and played by Meagan Good. The movie has no idea what to do with either the preexisting relationships or the new ones — it appears to be trying for a little of everything and assuming we’ll laugh. This is how you get an embarrassing moment in which Ron talks jive at Linda’s family’s dinner table. It’s an outtake passing as a scene.

It isn’t logic you’re looking for with a movie like this. It’s comedy that works. Sometimes the filmmakers even have a point. (Anchorman had a kernel of one.) Nothing involving Linda works because the assumption here is that her blackness is the joke, so Good has nothing to play. She just has to stand there and yell or seduce. And unlike Applegate or even Wiig, she hasn’t come up with a strategy for being shortchanged by the writing. Good is playing what’s on the page. In the first movie, Applegate played the problem of what wasn’t on the page. She was crafty.

After 15 minutes of Anchorman 2, you realize that the news world is the oxygen of these movies and that without it the comedy can’t breathe. It’s like when the Muppets left the theater: The further they go from showbiz, the less sense they make. Ron and his crew are media dinosaurs — they’re obscene Muppets, flamboyantly naive. In fact, the best, nuttiest gag in the film is a trend piece that leads to Ron doing crack on the air. It’s profane, but it works because it’s something you can imagine being attempted by a specific type of newsman — a Ron Burgundy. There’s also a good bit about covering a car chase on live television. But in nine years, the movie has lost what specificity it had. It could have been an amazing satire of the changing demographics in news and the perception that the steady encroachment of women and minorities were an affront to straight white-male egotism. The best we get are shots of Brick cowering behind a sofa whenever Linda addresses him or someone near. This is lazy, unexamined stuff. The movie’s advertising is a more brilliant critique of the so-called liberal media than anything actually featured in the movie itself.

Anchorman 2 isn’t a satire or a farce. The first film had a little of both, as did Ferrell and McKay’s Talladega Nights and The Other Guys. Those two movies managed to wed absurdism and irreverence while pushing shtick somewhere fairly new. They were relentless, and that relentlessness wore you down. Anchorman 2 comes close exactly once, with an all-star climax meant to personify the toxic glut of stuff on cable competing for eyeballs. But that sequence is just a badly staged remix of the biggest scene in the first movie. It’s a joke that doesn’t need to be told in a movie. It’s one that belongs on a website, probably the one Ferrell and McKay created for short-form hilarity, Funny or Die.

Ferrell has made it known that he had to convince Paramount Pictures to make this sequel. And there’s a kind of desperation in both the film itself and the outsize promotion of it. You don’t feel comedy. You feel a kind of pleading. Ferrell being out there selling and shticking as he has quietly personalizes the stakes. Members of the media love Burgundy and his friends because they couldn’t look worse than these fools. But the success or failure of this movie is on Ferrell. His live, in-person version of Ron works because it’s funny watching, say, Peyton Manning try to take the character seriously. Ferrell knows where the comedy is with civilians. There’s no script, and he can improvise past the stress. But why not take all these talented actors and make a new farce instead of proving you can rehash what doesn’t need a Part 2? It’s a predicament that makes you feel both cynical about the resulting movie and sad for its makers. Ferrell and McKay were so determined to tell new Burgundy jokes that they didn’t appear to care what they were about or whether they were any good.