The True Best Romantic Comedy of the Last Decade? ‘Anchorman.’ 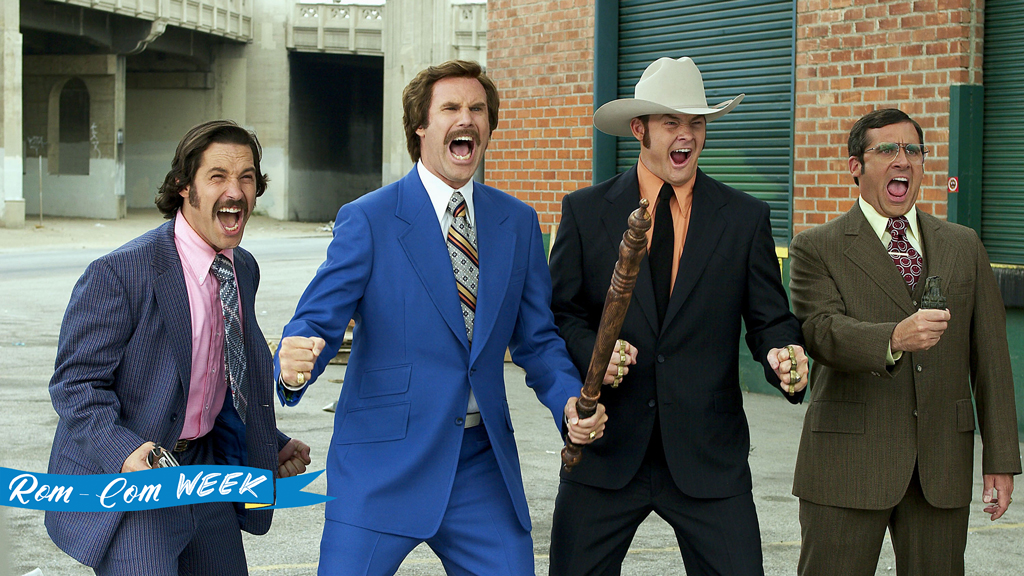 From across the room at a party, a man spots a beautiful woman who could very well be the love of his life. He crosses over closer to her and delivers a meet-cute pick-up line for the ages: “I don’t usually do this, but I felt compelled to tell you something. You have an absolutely breathtaking heinie. I mean, that thing is good. I wanna be friends with it.” She rebuffs this advance, appears again at his office the next day for a job interview, and the wheels of screwball romance are set into motion.

Yes, Anchorman: The Legend of Ron Burgundy is the greatest romantic comedy of the past 10 years. The cartoonish Ron Burgundy and Veronica Corningstone are more real than any of the pseudo-naturalistic characters in other rom-coms like Notting Hill or The Proposal, both of which end up being just as ridiculously broad. The characters of Anchorman are incredibly fleshed out, and even if they don’t exactly resemble humans in life, they ping deeply with how we actually feel inside. Who among us hasn’t been trapped in a glass case of emotion at one time or another?

Will Ferrell and Christina Applegate have such hot, great chemistry, helped by the fact that they are both very funny. Both actors respect one another as performers, which is your first hint the characters will eventually come to respect one another as coworkers. Ferrell and Applegate are playful with each other, which is something very important to real-life relationships but rarely seen onscreen, where romance is often turned to a high-stress, low-fun game of chicken. During the repeat viewings that Anchorman requires, you start to notice both Ferrell and Applegate trying not to laugh in almost every scene. Ron calling Veronica a “smelly pirate hooker” feels like a gambit by Ferrell to make Applegate laugh, as it does when she volleys back, “You look like a blueberry.”

The romance plotline was not necessarily originally at the fore of Anchorman. A whole story arc about confused extremist organization The Alarm Clock was cut and released later as Wake Up, Ron Burgundy: The Lost Movie. It’s similar to rom-com hall of famer Annie Hall, which abandoned its original central murder-mystery plot in the editing room and pushed the romance to the front lines. (This opens a wormhole in the mind about what the Annie Hall murder mystery must have been like, which is more or less answered by Manhattan Murder Mystery.)

The stakes of the romance in Anchorman are higher than a mere “will they or won’t they?” A lot of rom-coms deal with the interplay of sexual and workplace dynamics, but Anchorman is more explicit than most. Ron’s struggle to accept that the woman he loves is better than him at his job has real political weight, even if Ron claims to believe that “diversity is an old, old wooden ship that was used during the Civil War era.” Ron wrestles with himself in a love triangle with Veronica and his own ego, where he can only choose one. When he breaks down, grows the Brian Wilson beard, and barks “SHE’S BETTER THAN ME” at a bartender, it’s so incredibly funny because it’s also kind of real. No truly great rom-com comes without some darkness, and the feeling that Ron Burgundy might fall into an abyss of his own making gives the film its suspense. Veronica and Ron might be meant for each other, but that doesn’t mean he can’t still ruin it by getting in his own way. The conclusion is far from preordained. Ron earns his big revelations.

Ron’s firmly held belief in masculine superiority is challenged hilariously throughout, but ultimately he succumbs to change in order to be with the woman he loves. And the movie bears out that thesis, letting Applegate be as physical and silly as the boys, and proving that she obviously deserves to be there, that movies are better when women get to be goofs too. She’s the rare unicorn of a well-developed female character in a male-dominated comedy who can more than hold her own. (In this Animal House, she is the Karen Allen.) When the movie ends with Veronica and Ron as coanchors, equal partners in life and love, it’s genuinely satisfying. How many other rom-coms can say that?