Who Won the Scene? The News Team Street Fight From ‘Anchorman’ 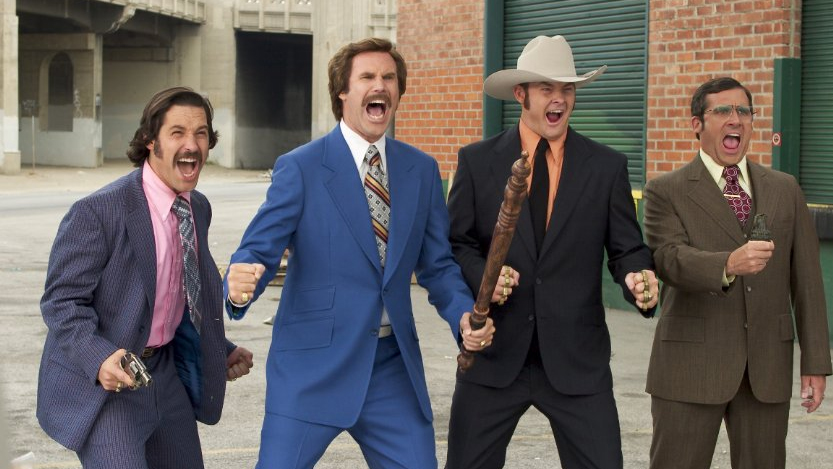 Welcome to Who Won the Scene? wherein a Grantland writer examines a classic film moment in which two or more actors enter a kind of figurative thespian Thunderdome and asks: Which one leaves? Today, Eric Thurm looks at the greatest cinematic street fight in history: the news team brawl from Anchorman: The Legend of Ron Burgundy.

Everyone knows Murphy’s Law — anything that can go wrong, will — but few people know the corollary, Burgundy’s Law: Anytime ego problems can cause a massive, lethal street fight between several teams of men with oily mustaches who are paid to read words off a teleprompter, they will.

Anchorman is many things. It’s the jumping-off point of Adam McKay’s career. It’s an oddly prescient depiction of the news. (Brian Williams definitely sang “Afternoon Delight” to himself in his office, and if you disagree, I will fight you.) And somehow, it’s also a surprisingly poignant movie about a goofy blowhard, something it accomplishes mostly by overcommitting to Ron Burgundy and his bizarre, hyper-macho community of action newsmen. Nowhere does it do this more than in the now-classic news team brawl.

The scene starts with the Channel 9 evening news team riding in on bicycles, ringing bells and circling Ron’s crew. It only gets more insane from there, with several additional teams showing up to come at King Burgundy, each with their own set of insane weapons they’ve inexplicably pulled out of nowhere. By the time the fight actually starts, you expect the entire scene to be taken up by Wilhelm screams and over-the-top punches — but it’s somehow even more ridiculous than your wildest dreams.

In the appropriate manner of a movie free-for-all, the only way to determine who won the Anchorman news fight scene is to eliminate actors, one by one, until a single combatant remains. Here are the contenders, seeded by how much they’ve appeared in the movie:

Right off the bat, we can eliminate Johnston, Wilson, and Koechner. Hell, get rid of Rudd and Vaughn, too, and cut the field by half. There’s no mercy in action news. With so many people and such a wide variety of baroque weapons used in this melee between media personalities, almost everyone gets one or two big moments between swings of a hatchet. Each actor in the scene is gambling with limited funds, and the people who don’t make it count when they’re given the spotlight don’t make the cut. In fact, sports clichés do a lot of work to explain the criteria for being an effective Anchorman fighter: Go big or go home without an arm.

Accordingly, Wilson, who in fact does leave this fight without an arm, comes in last. The funniest thing he does during the scene is underreact to having his arm cut off by Robbins, which pretty much anyone could have done (except Robbins). What’s he even carrying, a stick with a rotating saw blade on it? Did he just come from slicing up a pizza? Not even his zingers are good. “Yeah? Well, you’re about to be in … dead place” is … fine, but he never suggests that the third-place anchor is going to come anywhere close to the big boys.

Meanwhile, Johnston’s best showcase is pushing a bike and smirking at the very beginning of the scene, before proceeding to look exactly like Jim Carrey in Dumb & Dumber. At least he has a chain.

Koechner has brass knuckles and gets to throw a guy onto the windshield of a car, which should theoretically put him in the running for one of the top spots. But in the game of news anchor chairs, as in all true action movies, you need to be able to get off a zippy one-liner for any of your violence to really count, and Koechner is more silent than deadly.

If we’re being scientific about this, Rudd comes in ahead of those other three — he gets to smirk and wave around his deadly, sensual mustache (and his pistol) and beat someone with a stick before being trapped in a net by the guys with horses, which, if you’re going to be taken out of a fight, is a pretty good way to do it — while Vaughn narrowly ekes out sixth place, mostly because he’s the villain and has to place somewhere near the top by default.

Fifth Place: The Guy on Fire

I don’t think I can overstate how great it is that this guy is just on fire in the middle of the fight scene, and is still walking. Also, by all accounts, he was a total champ on the set.

Everything Ferrell says here is utter nonsense that somehow sounds awesome and important to the fight — of course his team needs to “keep a tight perimeter,” and obviously the most important rule in an anchor fight is that no one go after the moneymakers (their hair and faces). As the biggest target and reigning newsman, Burgundy has to fend off the most attacks, including a switchblade to the throat from Mantooth, and that he comes out without a scratch is damn impressive. (Really, we’re not giving enough credit to anyone for their defensive acumen.) And Ferrell gets in a few solid, if awkward blows with his fists and his weapon; that he’s actually willing to put his weird club thing where Mantooth’s mouth is says a lot about how kickass Burgundy really is. In fact, he’s able to shrug off the whole thing afterward with the only slightly bemused, immortal, “Boy, that escalated quickly.”

Bronze goes to Stiller’s Arturo Mendes, who has possibly one of the best entrances of anyone to ever participate in a comic gang fight: “Cómo están, bitches? Spanish-language news is here. Tonight’s top story: The sewers run red with Burgundy’s blood.” That I can type this entire line from memory after not having seen the movie for six years says something about how menacing it is (and something profound about me, but I’m not sure what that is), vaulting him over characters who actually get to distinctly beat other people up during the fight. He’s dignified enough to know that one does not go after the hair or face, but he still snarls and shrieks like a crazy person whom under no circumstances would you want to meet in a darkened greenroom. He alerts everyone to the arrival of the police, an underrated role in the battle given that, if everyone ends up in jail, no one wins. And boy, does he look like he knows how to use a whip.

You know Robbins’s turtlenecked public news anchor means business when he barks, “No commercials, no mercy!” because he doesn’t even need to buy into capitalism to be successful or ruthless. And the moment he says, “Ah, looks like we got ourselves a bilingual bloodfest” as if it’s the most natural thing in the world, you know that he has killed a man — a man who spoke English as a second language before Robbins tore his tongue out with his bare hands and sacrificed it to the gods for that glorious, glorious hair. And that’s not even the most impressive thing he does during this fight. That would be silently slamming his pipe back into his mouth after slicing off Wilson’s arm, taking one of the major players out of the action. Robbins doesn’t even have a weapon when he enters the scene. Somehow, he acquires a bat with nails sticking out of it, discards it like it’s no big deal, then has a machete casually thrown to him, catches it, and chops off a dude’s arm. Bravo, Tim Robbins. Bravo.

It was always going to be Brick, wasn’t it? Carell is the real star of Anchorman, and for good reason. He’s untouchable during the fight, accidentally joining the evening news team without consequences and screaming while uselessly waving around a grenade and avoiding the various serrated blades, bludgeoning weapons, and flaming explosives that take down lesser men. He doesn’t even have to know how he acquired a hand grenade — it does not matter even a little bit that he has no idea how he got it (and that we have no idea how anyone else got a hold of their weapons); that’s just how Brick rolls. He could blow a dude up anytime he wanted, if only he knew how to pull the pin.

Most important, he gets to kill a man with a trident. A goddamned trident, which he throws with unbelievable, preternatural accuracy, nailing someone in the chest in a manner that would make an Olympian archer weep with existential despair. Can anyone else in the Anchorman brawl say they had to lie low to avoid murder charges? I didn’t think so. He sums it all up in his postgame analysis: “There were horses, and a man on fire, and I killed a guy with a trident.” God bless you, Brick Tamland.