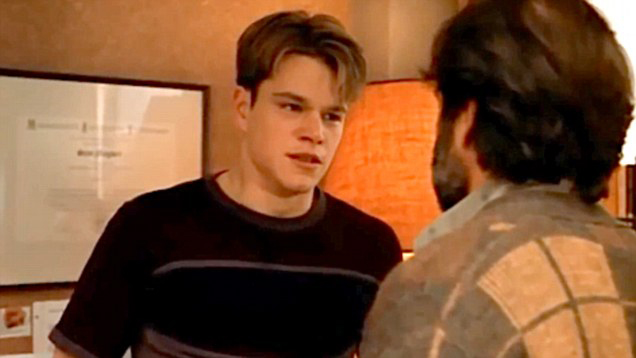 Welcome to Who Won the Scene, wherein a Grantland writer looks back on a classic film moment in which two or more actors enter a kind of figurative thespian Thunderdome and asks: Which one leaves? Today, Steven Hyden looks back on the volcanic “it’s not your fault” scene in Good Will Hunting, between Matt Damon and Robin Williams.

When it comes to scenes in which two actors are called on to practice some serious skills in each other’s grills, few films from the past 20 years can compare to Good Will Hunting.

This movie is like the Octagon. Just consider some of the scenes we won’t be analyzing: Matt Damon vs. Ben Affleck in the “best part of my day” scene. Damon vs. Minnie Driver in the “say you don’t love me” scene. (Also known as “text of the script vs. the subtext of the actors’ real-life romantic relationship” scene.) Damon vs. the blond ponytail in the “I’m dropping Gordon Wood references on your ass in a Harvard bar” scene (often overlooked thanks to the subsequent “do you like apples?” scene). Let’s not forget any of the criminally underrated Robin Williams vs. Stellan Skarsgård skirmishes. I could go on. Good Will Hunting is loaded with actor-on-actor violence.

But the Ali-Frazier matchup in this film is obviously Damon vs. Williams, and with good reason. Good Will Hunting planted a flag for Damon as one of the best leading men of his generation. As for Williams, the film won him his first and only Oscar. Given how his life would end, watching him in this movie has become almost unbearably poignant.

When Williams died in 2014, some people recalled happy childhood memories watching Mork & Mindy or Mrs. Doubtfire. Others reminisced about Dead Poets Society or Good Morning, Vietnam. But the clip my brain instantly dialed up was the “it’s not your fault” scene from Good Will Hunting.

I’m sure I’m not the only one. In the scene, Williams is the caring father figure many of us wish we had. Williams’s tender but firm insistence that Damon stop blaming himself for the years of physical abuse he’d endured could just as well be a corrective for any guilt or shame you’re carrying as a viewer.

How easy would it have been for this scene to turn out sappy? The way I’m talking about it, the scene is sappy. But it doesn’t play that way. The actors earn the audience’s emotional transference. But did Robin Williams win this scene? Let’s investigate!

We’ll start by researching the previous Damon vs. Williams face-offs. The common thread is that he who explodes never wins. For instance, in the “Winslow Homer rip-off” scene, Damon methodically psychoanalyzes Williams’s artwork, and you can see Williams’s anger rise. Williams rubs his beard; he affects a friendly tone and invites Damon to sit back down. When Damon brings up Williams’s (dead) wife, the façade slips and Williams tells Damon to shut his mouth. Damon then pushes harder — though again he doesn’t raise his voice — until Williams finally snaps.

This scene is all about the nonchalance with which Damon makes a mess and strolls away. Even after Williams threatens to snap his neck, Damon still has the wherewithal to calmly say, “Time’s up.” ADVANTAGE: DAMON.

Later in the film, during the “what do you wanna do?” scene, this happens:

It’s the inverse of the earlier scene — now Williams is the one quietly probing Damon, and bringing up painful truths, which compels Damon to yell and have a big dramatic moment, though the audience remains glued to Williams. For all the quotable lines and potential Oscar clips in Good Will Hunting, the film’s power derives from the parts you can’t recite or reduce to a sound bite. The actor who creates space for the other actor is always the MVP. ADVANTAGE: WILLIAMS.

This brings us to the “it’s not your fault” scene. It occurs toward the end of Good Will Hunting, and acts as the movie’s climax. All of the choking, all the “I will fucking end you!” talk, it’s all been building to this.

Here’s how it unfolds: Damon enters Williams’s office, in the midst of Williams and Skarsgård having an argument. Skarsgård then exits the office, leaving our two combatants. Damon and Williams both start out underplaying their respective hands; they’re giving space to the audience to let the emotion of the scene build.

Things pick up when Damon asks Williams if he has “personal” experience with what’s described in Damon’s file. Williams then makes a pained joke about how his childhood beatings were more “interesting” when his dad wore rings. Damon subtly ups the ante, claiming that he demanded to be beaten with a wrench by his foster dad, because “fuck him.”

I don’t know how often I’ve seen Good Will Hunting, but I always feel a lump in my throat between the seventh and the eighth iterations of the phrase — when Damon is teetering on the edge, and Williams is about to push him off the cliff. After the eighth time, this happens:

This is a dance, and Williams and Damon are in perfect step with one another. Williams is leading, applying the pressure. Damon is following, signaling to the audience when it’s time to react. I feel like I’m about to break down here because, according to design, I’m supposed to break down. This scene is textbook emotional manipulation, and it works beautifully even after countless viewings.

When Williams says, “It’s not your fault” for the ninth time, the lump in my throat always (always!) turns into tears.

With the 10th “It’s not your fault,” a full emotional breakdown has been induced — in both the movie and in the audience. Huggageddon is upon us.

Jesus, should we all take a moment? I feel like I’m going to cry right now, as I type this.

So, who wins? Williams is the sentimental choice, but Damon nails the slow burn. It’s so close. In the end, I have to go with the film’s established precedent: The one who explodes never wins. The audience might cry along with Damon, but we’re all reacting to the soothing resolve of Williams. He never relinquished control, and never lets go of our attention — then or now. If you love the movie, Good Will Hunting is what keeps Robin Williams alive. He’s still there to let you off the hook.