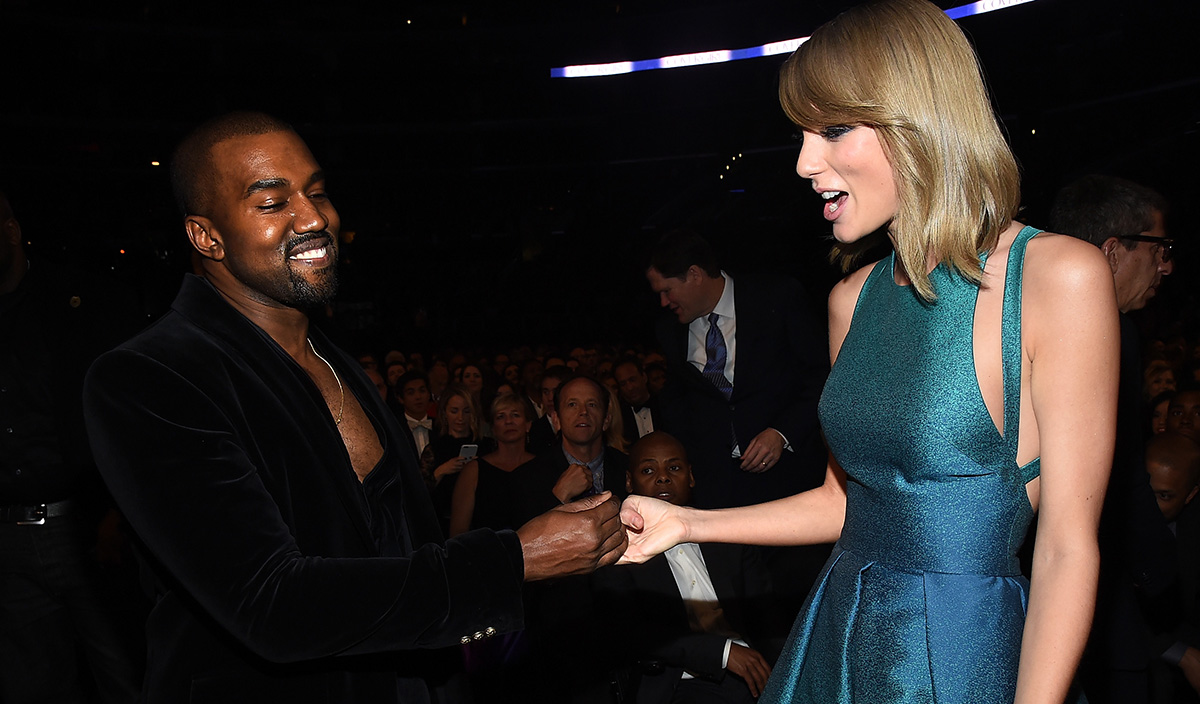 Three hours into the 2015 Grammy Awards, Prince walked onstage to present one of the night’s few televised awards, Album of the Year. It’s an award he’d been nominated for twice, losing both times. In 1988, his album Sign ’O’ the Times lost to U2’s The Joshua Tree, which stings to learn as a Prince fan, but is not wrong.

Three years earlier, in 1985, it was wrong. Purple Rain lost to Lionel Richie’s Can’t Slow Down. Looking at the albums that came out that year (also nominated: Bruce Springsteen’s Born in the U.S.A., Tina Turner’s Private Dancer, and Cyndi Lauper’s She’s So Unusual), the correct answer to “What is the album of the year?” is Purple Rain. Because it was the best album of the year.

Eighties digressions aside, it was an interesting choice to have the two-time loser, onetime robbed Prince present. Before announcing the nominees, Prince stated, “Like books and black lives, albums still matter.” It was classic Prince, in a full orange getup and Afro wig, giving zero cares about what you think. Because he’s earned the right to say and do whatever he so pleases, much to the public’s delight. 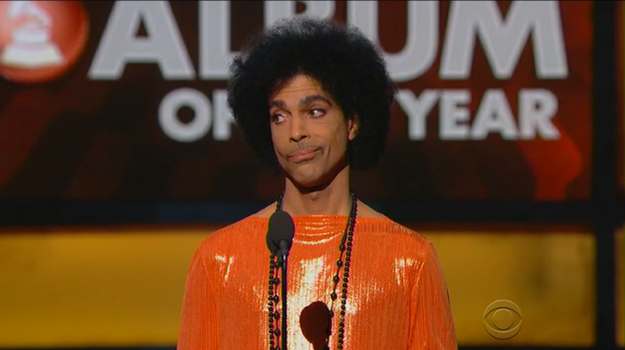 When this revelation — a shock to many — occurred, a familiar face appeared onstage, leaping from the front row: Kanye West.

Who knows what would have happened had Kanye taken Beck’s advice to stay onstage. Instead, Kanye went back to his seat with a smile on his face, as if it were all for a laugh. The new Kanye West, making fun of old Kanye West, a continuation of what Jay Z started at the 2012 BET Awards.

In this, Jay interrupts Kanye as they accept an award for Watch the Throne, and everyone laughs. Kanye laughs. Beyoncé laughs. Kim laughs. Jay laughs and even gives Kanye a hug. It was a true roast moment.

This moment felt like 2.0. But then it wasn’t. Speaking to the E! Grammy news team (which included his sister-in-law, Khloe):

The Grammys, if they want real artists to keep coming back, they need to stop playing with us. We ain’t finna play with them no more. “Flawless” Beyoncé video. Beck needs to respect artistry and he should have given his award to Beyoncé. And at this point, we tired of it! Because what happens is, when you keep on diminishing art and not respecting the craft and smacking people in the face after they deliver monumental feats of music. You’re disrespectful to inspiration. And we as musicians have to inspire people who go to work every day, and they listen to that Beyoncé album and they feel like it takes them to another place. Then they do this whole promotional event, and they’ll run the music over somebody’s speech, the artist, because they want a commercial advertising. Like no, we not playing with them no more. And by the way, I got my wife, I got my daughter, and my clothing line, so I’m not finna do nothing to put my daughter at risk. But I am here to fight for creativity, that’s the reason why I didn’t say anything tonight, but y’all know what it meant when ’Ye walked on that stage.

He was serious. From the horse’s mouth, we know why he went onstage and why he didn’t say anything. And following this, the backlash.

He’s found a way to rub large segments of every demographic the wrong way. Even Kanye West fans are split on the public persona of Kanye West. There are few things like it.

Much has been theorized about why he is the way he is. Or what it is about the way he is that is so inappropriate and loathsome. But it’s not that complicated. It all comes back to an idea of Kanye West not being proper, about his lacking a certain respectability.

It’s hard to gain support when you butt heads with respect. But Kanye’s lack of respectability has another wrinkle. It’s this idea of his opinions, ones that should remain private, being made public.

Every single day, I refresh Twitter, I read blog posts, I check Facebook. More often than not, I’m seeing opinions. Every so often, they’re right, or perhaps based in some fact. But typically, they’re hyperbolic, highly emotional, and often wrong. But that’s OK. Because the Internet has largely become a forum where much of the respectability behind the idea of emoting has fallen by the wayside. Has it created an echo chamber of noise and nonsense? Yes. Absolutely. And who knows how to undo that? But ultimately, there’s been an unwritten agreement that it’s better to have the ability to say whatever you want than needing to be screened and pre-approved in order to speak.

And because of that, Beyoncé can sing one of the more important gospel songs ever created, on music’s biggest night, and you can criticize her for having the gall to do that. Are you in the right? Of course not. But you have every right to say that, because it’s your opinion.

Somehow, this act — this right — of supporting whomever and denouncing whomever, doesn’t extend to Kanye West. Because when he does it, it’s obnoxious — even though we turn around and do the same thing, day in and day out.

Bernie Mac, in his timeless Original Kings of Comedy bit, repeatedly said, “I say what you’re scared to say.” It’s the foundation of his comedy and it became the reason he stood out in a tour with other Kings. It’s why Steve Harvey introduced him as “The one and only Bernie Mac.” That’s different from “the funniest man on the planet,” because that fact was disputable. But being unique, being an individual, sometimes to a fault — that was Bernie Mac. He put himself out there. He threw himself under the bus. And he tapped into that terrible, uncomfortable part of ourselves that we liked to pretend didn’t exist.

When he hit that stage, he told the crowd, “Here I am.” It was cocky as shit, but he was right. He knew everyone needed someone to say that stuff for them. It’s why the kneejerk reaction to much of Mac’s best work is to cover your mouth, hide your face in shame, and laugh until it hurts. You laugh because you shouldn’t. Because what he’s saying is not respectable in the slightest. When he says, “Don’t sometimes you wanna say, ‘You ugly sommamabitch,'” you know it’s wrong. Because you were raised right. You know what the line is. And you are watching it being crossed. But you laugh anyway. Because there’s something great about watching someone publicly cross the line the way you constantly cross it in private.

This idea of the habitual line step is universal, regardless of the medium. As are the arbitrary rules of who’s allowed to do the crossing, who’s allowed to be crossed, and of course, in what setting can any of this take place.

When Kanye rushed the MTV Video Music Award stage on Taylor Swift that first time in 2009, the backlash was so strong that he went into hiding. Lest we forget, he was out of sight for months until reemerging with his new song, “Runaway,” to close the 2010 MTV VMAs.

It was red suit, gold chain, white ballerina Kanye, in all his thematic glory, singing about toasting to the douchebags alongside his issues with intimacy. But it was more than that. In front of sparkles falling from the rafters, he shrugged and walking off to an elated “Kanye, Kanye” chant from the once-again adoring public.

He was back, but it wasn’t the first time his future had hung in the balance because of something he had said. And as we know, it certainly wasn’t the last.

When these Kanye moments happen, sometimes they’re painful to watch. Because, unlike most things from our iconic public figures, it’s a freestyle. It’s passionate and raw. It lacks practice. And it’s never boring. Just watch Kanye and Sway. It’s funny at times, but you also want to grab Kanye and say, “Wait, just slow down a bit.” When he gets in this zone, he stumbles. He often takes these pauses because his mouth can’t keep up with his brain. He’s saying things, but he’s not saying them perfectly. In retrospect, you know he wishes he could have framed some of these things more clearly. But it’s too late.

But that’s a life he’s decided to live. He’s rejected a scripted existence.

A planned Kanye says, “I want to be like Andy Warhol.” But how could you possibly want that version of Kanye? If you are genuinely holding out any hope that our biggest and brightest can also be our most honest and flawed, you have to want, “I am Warhol.” You have to.

He wants respect, but even more than that, repeatedly, wants the people he respects to get respect. It’s not a foreign concept. But because he’s Kanye, it’s different. Because it lacks the grace that society has deemed necessary to make such demands.

Kanye truly believes that Beyoncé should have won Album of the Year. And that’s his opinion, so he told everyone, just like everyone else. But he’s also right, which is why he’s so strong in his opinion. When TMZ caught up with Kanye the following morning, he clarified his thoughts on the matter:

West: Beck know that Beyoncé should have won, you know that.

TMZ: Have you ever heard of Beck before yesterday?

West: Come on, man. I love Beck. But he didn’t have album of the year.

It’s clear he’s cooled off a bit. He’s acting less in the moment. But he still feels how he feels. It’s not as anti-Beck, but it’s still very pro-Beyoncé. There’s a difference between regretting something happening and regretting the way you articulated yourself. Kanye’s a mistake maker, which he admits. It’s his greatest skill, which is widely seen as his greatest flaw.

I’ve long worried about my love for “Runaway.” Did I love it because deep down, many of my most private thoughts — the private thoughts that convince me every morning to be better than everyone else, but never see the public light of day — are arrogant? Or is it simply because I love strings over a piano? Regardless of what it is, I can’t help but chalk up many a Kanye song, Kanye outburst, Kanye rant, Kanye episode to his saying something I could never say publicly. Not yet, at least.

By not letting that moment when he rushed Beck’s stage become a “Look at Kanye, he’s now just a playful guy” moment, he assured us that he’s still Kanye. He’s not so rich, so famous, so comfortable that he can’t still care. Because he’s not saying anything different from anyone else. It’s just that when he says it, people actually are listening.