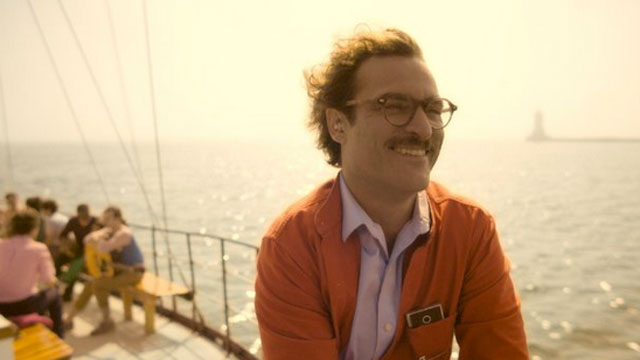 If you’ve been waiting to hold your 86th Annual Academy Awards Best Picture marathon until all nine nominees came to VOD, get that evite ready: Finally, here comes Her.

Spike Jonze wrote and directed the story of Theodore Twombly, a man who, in the not-so-distant future, makes his living creating “Beautiful Handwritten Letters” to clients’ specifications. No one has, apparently, been sending any such letters to Theodore since the end of his marriage, and though he goes along with friends’ fix-up, the IRL woman can’t compete with his phone’s new sexy-voiced operating system, Samantha. Before long, Samantha and Theodore have fallen in love. But … then what?

If you were alive in January, you read thinkpieces about whether the movie was more about emotional disconnection in the digital age or about the commodification of female experience or about how what every man really wants in a woman is someone with no desires of her own who’s literally programmed to fulfill his every whim; you also saw spoofs like “Him” or “Me.” I’m not sure if it’s possible to go into it now with a totally open mind, but give it a shot.

Wesley Morris: “You can imagine how Stanley Kubrick might have handled this same premise. The technology would have turned dark. I might have liked that movie. But I admire what Jonze does here.”

Just in time for Zac Efron to bask (shirtlessly) in the big-screen success of Neighbors, his last film arrives on VOD. Since it originally dropped back in “Dumpuary” (see Wesley Morris’s review, below), That Awkward Moment was a lot less well received.

Efron plays Jason, young and single in New York City, and trying to navigate the confusing world of dating with the help of his best friends Daniel (Miles Teller of Divergent) and Mikey (Fruitvale Station’s Michael B. Jordan). Unfortunately, since they’re all pretty clueless, very little of the “help” is actually helpful. But I bet these dudes do end up finding ladies who are willing to put up with their dippy BS!

Wesley Morris: “The movie is going for a kind of Taming of the Douche. But none of the three stars is really up to the task.”

So, from what I can gather, I, Frankenstein starts out with the story you probably already know: Dr. Victor Frankenstein constructs a human out of corpses (Aaron Eckhart!), brings it to life, and rejects it, whereupon the monster kills Dr. F’s wife, and a race around the world — with the creator in dogged pursuit of his creation — ensues. Here’s where the people behind the movie thought, “Mary Shelley’s seminal horror novel is pretty good, but we can improve it!”

What happens then is that the creature gets attacked by demons, saved by gargoyles, brought in for an audience with the gargoyle queen. Cut to: the creature spending centuries fighting demons as a free agent, until … well, I won’t spoil it. Just kidding! A movie with a 4 percent fresh rating on Rotten Tomatoes probably can’t be spoiled.

Look. I’m no fan of profiling, and I believe anyone should get the chance to do any job they think they can. But the only way Philip Seymour Hoffman ever should have been cast as a character named “Mickey Scarpato” is if that were an ironic nickname — you know, like when big guys are called “Tiny.” Seriously, Philip Seymour Hoffman as an Italian? Why? And also, how?

On demand the same day as its theatrical release, God’s Pocket is the feature film debut of John Slattery (who’s already directed several episodes of Mad Men, the show on which he stars). It’s based on the first novel from Pete Dexter, who also created the source material (and adapted it as a screenplay) for 2012’s The Paperboy, and revolves around the small-time crookedness of residents of the film’s titular Philadelphia neighborhood.

Wesley Morris: “Slattery never finds a tone. This is essentially a comedy, but he doesn’t know what kind.”

'Interstellar' Trailer: The McConaissance in Space