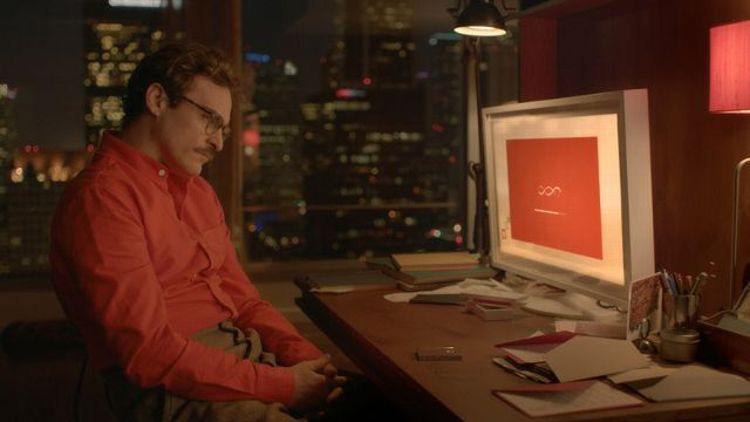 Spike Jonze doesn’t simply direct. He innovates. His fourth movie, Her, is set in a kind of deluxe present. The apartments are spacious luxury boxes that reach way into the sky. Some of the clothes are combination garments, like a blazer with shirt buttons and high-waisted, slimming trousers. The main character, Theodore Twombly (Joaquin Phoenix), works at BeautifulHandwrittenLetters.com. He dictates correspondences on behalf of customers to make it look as though they had written the note themselves. He speaks and his words appear in a cursive script on a computer monitor. His smartphone is as small as half a deck of cards, is beveled like a folding picture frame and paneled with a little eyehole. It looks as though a vintage camera reproduced with a flask. This is how the future might remember the past: generically chic.

Her is set in Los Angeles. But you quickly notice the dozens of towers composing the skyline and wonder when the city’s downtown copied and pasted itself to infinity. It’s not digital sleight of hand. It’s stunt casting. Jonze shot the film in Shanghai, and if it doesn’t win best supporting metropolis there is no justice anywhere. The film is full of these non-superficial indulgences: Having one large city played by a much larger one? Deciding that you don’t want to photograph a single character or extra wearing denim? It’s all a deliberate and delirious bid to reorient and dislocate. It’s also some of the most inspired cinematic use of architectural space since Michelangelo Antonioni. You’re enchanted by the arts-and-crafts approach to science fiction. This is the near-future of a yuppie’s dreams.

But the architectural and epistolary innovations aren’t what piqued Jonze’s curiosity here. The movie introduces a real-world problem. Theodore has just purchased a new operating system for his phone. Excuse me: “It’s not an operating system. It’s a consciousness,” according to its makers. The consciousness is called Samantha, and it speaks with the soothing, husky warmth of Scarlett Johansson’s voice, which often comes into his ear through a speaker as small as a rook in a travel-size chess set. Samantha starts as his assistant. She sorts his emails and looks things up for him. She proofreads his work letters and arranges an evening with a woman (Olivia Wilde) from a dating site.

Along the way, Theodore and Samantha converse and compliment each other. He talks about his divorce from a writer (Rooney Mara). She talks about her evolving sense of ontology. He affixes a safety pin partway up his shirt pocket to act as a booster seat that allows Samantha to see out when he walks. And one night, after he comes home from that date, a little drunk and a little disappointed by how it went, they have what can best be described as smartphone sex. For this, Jonze darkens the screen and makes you picture what’s happening, as Theodore must. The awkwardness of the following morning is funny for both his disclaimer (it didn’t mean anything) and her response (get over yourself).

There is a classical romantic-comical beauty about Her. Like the switching of the cities, technologizing the relationship is just an upgrade, not a reinvention of love. The movie is a very gentle satire. It slightly tweaks how artisan-oriented and technology-dependent a certain type of person already is. He mocks some of that artisanship. Theodore’s neighbor and best friend, Amy (Amy Adams), is a documentary filmmaker whose unfulfilling day job is as a game designer. The object of her latest game is to prove you’re a supermom by, say, speeding to school in order to be the first mom with treats. Those scenes are very funny. But that’s not what Jonze’s movie is about. Amy is married to a condescending stiff and she’s unhappy. Theodore relates, but he has Samantha to fill that void.

You can imagine how Stanley Kubrick might have handled this same premise. The technology would have turned dark. I might have liked that movie. But I admire what Jonze does here. Samantha doesn’t scare Jonze. She fascinates him. With another director, Samantha’s report that “I’m becoming much more than what they programmed” would telegraph the horror to follow. But then she says, “I’m excited.”

In many senses, Samantha is like any ideal partner. She’s ingenious and fun, and she turns Theodore on. But the technology has its limitations for both of them. He’s a person. She’s a personification in search of personhood. They want more than virtual consummation, and their inability to achieve that reinforces his loneliness and awakens that feeling in her. The movie becomes an exploration of the dissolution of the fantasy. Is either of these people ready for love?

With a lot of artistry but not too much flamboyance, Jonze has become an emotional surrealist. There’s a depression that runs through each of his parallel universes: the drab, cancerous mise-en-scène of Being John Malkovich, Donald Kaufman’s epic creative frustration in Adaptation, the infinite sadness of the monsters in Where the Wild Things Are. In Her, it springs from a loneliness you can see in the faces of Phoenix, Wilde, and Adams, all of whom are wonderful in their understatement.

Phoenix wears a rust-colored mustache than gives him a striking handsomeness. He seems surprisingly comfortable with the joy that awakens in Theodore. Strolling across extra-wide balustrades on his phone, spinning around at a carnival under Samantha’s command, racing through the lobby of a skyscraper, laughing, dancing: It’s a new emotional register for him. Jonze has Theodore traipse the beach with Samantha. At some point, he lies down on his side in the sand, as Phoenix did in The Master. You’re so used to the time-bomb tick with him that you’re not quite sure you don’t hear it. Even in explosion, he’s always been a devastating actor. But it’s nice not to be covered in soot.

Jonze seems to understand how to coax casual behavior out of actors. He can push them to exciting, gonzo places, but it’s the quirky normalcy he gets that’s impressive, as he does in Wilde’s two scenes and one conversation between Phoenix and Mara. What he gets out of Johansson is a happy shock. On some level, all she’s doing is talking. But it’s how she talks that’s divine. She’s constantly adjusting the emotional aperture of her voice to get the right shifts in timbre. You never see her and yet she achieves physicality. Casting an actor famous in part for her body is a smart challenge. The sexiness is foregone. It’s not the disembodiment that amazes, but the alluring musicality it allows for. Not only does Johansson capture the sense of surprise and wonder of playing an invention but all the nuanced response of playing a girlfriend — irritation, chagrin, bliss, and sadness.

The sadness, of course, is a condition to be overcome, in a Jonze movie often by the experience of some new feeling. He takes the depressed on an adventure. But the high is always followed by a crash. There’s an exquisite scene in Adaptation in which Susan Orlean (Meryl Streep) ingests orchid dust and has an intensely sensual response to a telephone and her feet. But by the end of the film she has turned into a monster. With Malkovich, the crash is literal. The ride shifts you onto a knoll beside the New Jersey Turnpike.

What’s thrilling about Jonze is that he honors the truth of melancholy — the failed or failing relationships that create or exacerbate it — while committing himself to the struggle of being rid of it. There’s something admirable about a director who wants — and wants us — to feel something new, too, to take a leap. In that sense, he’s a great down-the-rabbit-hole director. Being John Malkovich and Adaptation were written by Charlie Kaufman. Without Kaufman’s structural genius, Jonze has been freer to explore melancholy without tipping into the grand misery that Kaufman did.

Her gets at something primal that persists in us. But it’s not a wild movie, just very sad. I suppose if he’d wanted, Jonze could’ve come up with a film about technology that replaces that sadness or extracts it, some kind of 22nd-century version of what Kaufman and Michel Gondry dreamed up for Eternal Sunshine of the Spotless Mind. But this isn’t as knotty or fevered a movie. It has what, with Jonze, passes for poignant directness: Boy uploads girl.

But Jonze isn’t enamored of the technology for its own sake. Watching Her I thought a little of Fritz Lang’s Metropolis and Andrew Stanton’s Wall-E and the idea of love and machines. Mostly, though, I thought of Daft Punk, two Frenchmen in robot costumes manufacturing dance music. When they sing, they do as machines looking for love. It’s absurd, but their robotics are a moving search for human truth. In the spring, they released Random Access Memories, a dance record played almost entirely with live instruments. Paul Williams sings on a song called “Touch,” and after hearing it a couple of times, the pleading refrain (“I need something more”) breaks your heart, especially once the worn-down wisdom in Williams’s voice begins to warp into a lot of ones and zeros.

Most of the music in Her is by Arcade Fire, but the searching, forlorn sentiment of Random Access Memories matches the mood. The purpose of Samantha is not simply technological. It seems like satire of where we’re headed. But the movie isn’t the setup for a trend piece about phone sex (although it does become clear that dating an OS has become a thing). Jonze has thought poignantly beyond that. This is a movie about the despair of a breakup. The person you date after the end of a long relationship should be warned. (Wilde’s character probably dodges a bullet.) Jonze appears to have thought long and imaginatively about how technology can help with that. So Samantha serves a healing function. She’s not just an operating system. She’s the rebound.

The Year in Insanity: Kanye, Sinead, Gaga, and the Looming Specter of Amanda Bynes