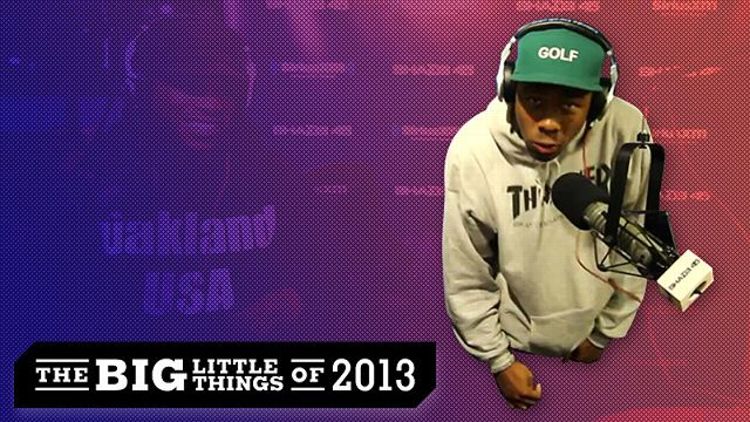 Tyler, the Creator, the grumble-voiced tornado front man for Odd Future, is a funny person.

His humor is defined by libertarianism, which isn’t all that surprising given that he turbo-rocketed from Ladera Heights to fame before he was 21. So the aforementioned videos are mostly just compilation clips of him riding around in a car cursing at strangers from the window, or on tour asking startled Asian women where they think he’s from, or at Target scanning items with a pricing gun to see how much they cost (his penis, an old woman’s perm, etc.). On none of them, though, is the actual funniest, most acerbic thing he has ever been recorded doing.

In February, Tyler appeared on Sway Calloway’s Shade 45 radio program “Sway in the Morning.” He was there as part of his press tour to promote his then about-to-be-released second proper album, Wolf. As Sway is wont to do, he petitioned Tyler to perform a bit — a written rap, a freestyle, whatever.

After a small amount of dodgery, Tyler agreed. And as Tyler is wont to do, he turned it into a mini spectacle, the best kind of confrontational satire, camp theater of the highest order.

He adjusted his face, swapping his open-mouth smile for a shark’s snarl. He let his neck albatross downward and agitated his shoulders for effect. He very nearly paced (and then he actually really did pace). And then he started rapping.

“Liiiisten,” he growled again, purposely mimicking the self-aggrandizing opening line way too many rappers opt for before freestyling. It became obvious what was about to happen.

Six months later, Tyler’s groupmate Earl sat in the same room with the same interviewer and was asked to do the same thing Tyler had. Earl squirmed, saying he’d made a promise to never do a real rap live on the radio. Shortly thereafter, though, he acquiesced to Sway’s hat and did a real rap live on the radio. Tyler made no such concessions. He rapped, but he did so as a joke, in the most cartoonishly severe way possible. It was a passive-aggressive attack on tradition, and it was executed perfectly.

“Real nigga, I got y’all,” he opened. There was no hint of silliness in his face.

“Hit a nigga eatin’ a hot dog.” Still nothing.

Sway sat smiling. It took him 11 words to figure out what was happening.

Tyler continued, building to a more and more ferocious pitch, his aura squashing all the seriousness off Earth. Near the end: “Arf, arf. Bark, bark. Can’t see a nigga in the dark, dark.”

And then it ended.

It took less than a minute for Tyler to lampoon all the Murda Mooks on YouTube, to mock them and every other unoriginal rapper who’s ever postured (and basically any human who’s ever bothered to think about rap in any way other than instinctually, really) into oblivion. It was brutal and brilliant and funny and unruly.

He finished, fumed, slapped hands with Sway, declared nobody was ready for him (or it), and then gritted through his teeth about his name being his name (another gangster cliché) and bubbled over in laughter. He followed that up with an even funnier, equally biting a capella.

By the end of it all, he’d asserted his casual lyrical dominance (to his credit, he is so adroit at rapping that his joke flow, full of nuance and tonal shifts, was better than that of all but a few who rap in that manner seriously) and his overt prejudice subtly (old people can fuck off, is it basically).

I’m 32 right now. Where I work, I mostly talk only to older people. I’m the young one in our group. I know about Twitter and have heard of Lorde (“Royals,” anyway). I thought I knew things. I thought I knew how it was going. But I don’t. I don’t understand anything new. Tyler does. Because he’s making it. And he’s not even trying.