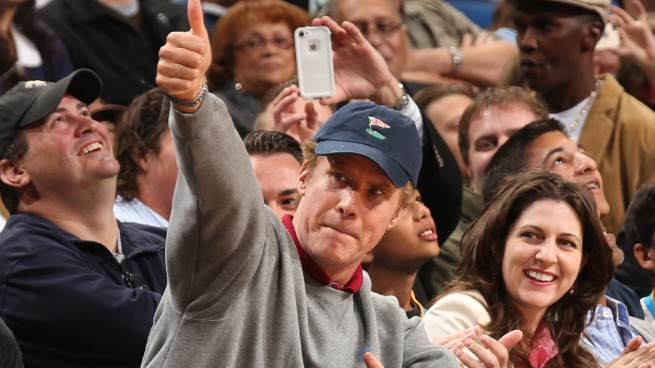 Will Ferrell has made a specialty of playing arrogant buffoons whose talents may not match up with their inflated senses of self. There’s a line of toxic machismo running through characters like his Robert Goulet impression, Ron Burgundy, and Ricky Bobby, but Ferrell never valorizes his idiot man-child characters. He pricks their exaggerated theatrical manhood with a pin and then lets us watch them deflate like an airdancer, flailing all the way down. Who better, then, to play tennis player Bobby Riggs in Match Maker, a film about the famous Battle of the Sexes match between Riggs and Billie Jean King?

Ferrell has made movies about ice skating (Blades of Glory), basketball (Semi-Pro), NASCAR (Talladega Nights: The Ballad of Ricky Bobby), and soccer (Kicking & Screaming). He was a kicker for his Irvine high school’s varsity football team, and he majored in sports broadcasting at USC. He soured on the idea of being a sportscaster after an internship at a local network, and eventually gravitated toward comedy. Match Maker, however, is being billed as a drama, which means Ferrell may be aiming for that crossover Oscar all comedians eventually seem to try for. He’s dabbled in more serious fare in Woody Allen’s Melinda and Melinda and the Raymond Carver adaptation Everything Must Go. Ferrell is not writing the screenplay with his usual writing partner, Adam McKay; rather, it will be handled by Steve Conrad, who has written movies such as The Weather Man (and who is currently attached to an upcoming John Belushi biopic starring … Emile Hirsch? Really? I dunno, Emile).

The movie is based on an Outside the Lines article that investigates claims that Riggs threw the 1973 match on purpose to pay off gambling debts. This information, never verified, rebuts the historical understanding of the Battle of the Sexes narrative, in which the 29-year-old King whooped Riggs’s 55-year-old retired ass through pure skill. The events of the Riggs and King match were very much like the story of Anchorman; a man struggling to come to terms with a female competitor being not only his equal, but his better. Anchorman ended optimistically, with Burgundy learning to set aside his own ego at times. But the Riggs match ends with Riggs, who had been a top-ranked player decades earlier, humiliating himself trying to prove that an aging man must be biologically superior as an athlete to a female at the top of her professional game.

Riggs eventually died of prostate cancer in Encinitas at age 77. He and King spoke in the days leading up to his death, and in the 2006 HBO documentary Billie Jean King: Portrait of a Pioneer she said her final words to him were, “I love you.” The Riggs and King story is a sprawling epic that could make an amazing film. At the very least, it will have amazing wigs and costumes. So, who should play Billie Jean King opposite Will Ferrell’s Riggs? I vote for Kristen Wiig.

Video on Demand Report: Breaking News — 'Anchorman 2’ Is on VOD