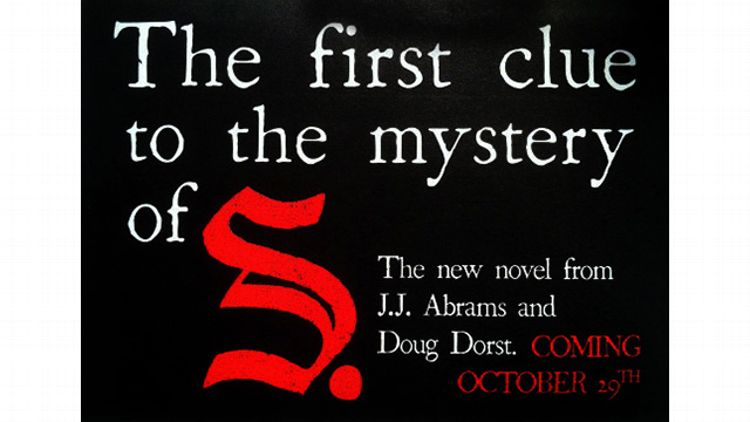 Yesterday we alerted you to an upcoming J.J. Abrams project via a highly mysterious (mysterious!? That guy!?) trailer tweeted by Bad Robot. We made a few guesses, refreshed the clip until our eyes bled, and played it backward slowed down until we were sure we could hear the bassline to “Yub Nub” in the lower register of the narrator’s voice, but to no avail. I guess we will never know what those kooky geniuses have in store for us —

But seriously: All credit goes to Bleeding Cool for connecting the dots between the weathered typeface of the trailer and a promotional postcard “teaser” for the previously reported S., a book Abrams was producing with novelist/Jeopardy! champion Doug Dorst. The book, which Abrams first announced he was working on in 2011, has been slated for release this fall by Little, Brown’s Mulholland Books. It sounds like a predictably high-concept volume — an epistolary mystery, if you will. Here’s the publisher’s description:

At the core of this multilayered literary puzzle of love and adventure is a book of mysterious provenance. In the margins, another tale unfolds — through the hand-scribbled notes, questions, and confrontations of two readers. Between the pages, online, and in the real world, you’ll find evidence of their interaction, ephemera that bring this tale vividly to life.

So, if I’m interpreting this correctly, it’s going to be basically just like The Jolly Postman. Can’t wait.

Movie Poster Roundup: Because What Else Are You Going to Stare at Waiting on Line?

Remembering a Master: The Life and Work of Elmore Leonard