Remembering a Master: The Life and Work of Elmore Leonard 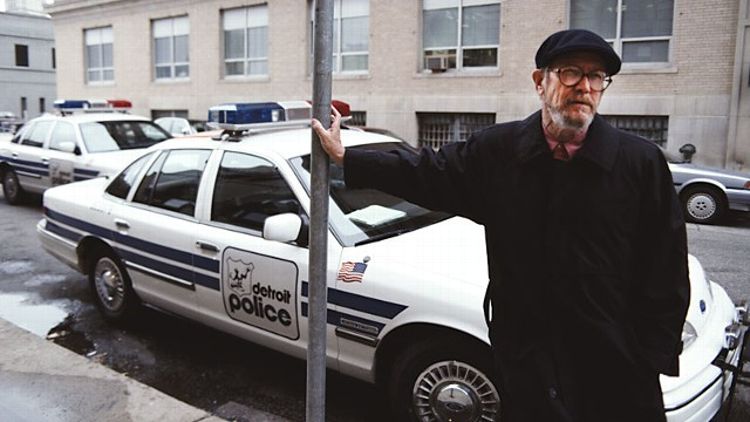 In recent years, because of the well-deserved success of the FX series Justified, we became used to reading about how great Elmore Leonard was. Leonard, who has died at age 87, had praise heaped upon him by the producers of the TV show to the point where proclaiming Leonard’s genius became part of the show’s promotion, complete with tales of its staff writers wearing wristbands with the initials “WWED” (“What Would Elmore Do?”). Leonard himself unwittingly contributed to cult adoration when he came up with, at the request of the New York Times, 10 rules for writing that were seized upon as inspirational laws by fans and would-be writers. (In the wake of Leonard’s death, these rules immediately popped up all over the Internet, often in lieu of proper obits: It’s the Elmore Buzzfeed Elegy.)

Most people know Leonard through the TV and movie adaptations — not just Justified, but also the best Steven Soderbergh film, Out of Sight (1998); the best Quentin Tarantino movie, Jackie Brown (1997); one great B-film, Budd Boetticher’s Randolph Scott Western The Tall T (1957); some good B-films with great little moments, like the Paul Newman vehicle Hombre (1961); and both the 1957 and 2007 versions of 3:10 to Yuma. There were also a passel of dogs, movies for which Leonard took the money and cheerfully hated, such as Burt Reynolds’s Stick (1985) and the 1969 Ryan O’Neal version of The Big Bounce.

But the real achievement of Elmore Leonard is one of self-effacement — of the denial of style in, first, his Western novels in the 1950s, and then most extraordinarily, in his thrillers, the most sustained body of great work in that genre this side of Donald Westlake/Richard Stark. In the American thriller, great value is placed on style: style as character (the way the hero conducts himself — moral rigor) and style as art (the way a writer describes the hero’s dilemmas — rigorous prose). Raymond Chandler and Ross Macdonald were obsessed with style, inspiring readers to pore over their increasingly ornate metaphors for clues to proper conduct in a corrupt world; it turned George V. Higgins into a mannered minimalist who eventually had difficulty making his narratives coherent.

Leonard avoided these traps with hard-won, diligent labor. He started out as a Mad Man–era ad copywriter, drinking too hard while writing Chevrolet ads that were, he told an interviewer, “cute, alliterative, full of similes and metaphors” — everything his subsequent fiction scrubbed away. Leonard started publishing fiction during the last gasp of the pulps; his first agent was H.N. Swanson (“Swanie”), a colorful figure who had also represented F. Scott Fitzgerald and who took credit for Leonard’s material success: “He was a pup writing Westerns … I told him to forget the cowboy stuff and write stories with women in them. He did, and I made him a millionaire.” (The Westerns are good — try Last Stand at Saber River — but no better than others in the genre by Ernest Haycox or Cynthia Haseloff, whereas Leonard, despite his modest insistence that his work sprang from Higgins’s The Friends of Eddie Coyle, ultimately stands alone in the thriller genre.)

Leonard quit drinking for good in 1977 with the help of AA (his essay about his alcoholism in Dennis Wholey’s 1984 anthology The Courage to Change is as good — unsparing, full of terse self-knowledge — as any novel he ever wrote). From then on, Leonard hit a high-quality groove he maintained for at least three decades. You know Justified and his latter-day best sellers, but his ’70s and ’80s novels, many of them paperback originals, are fucking amazing.

Leonard’s favorite plot is the revenge story — someone exploited by criminals commits a bigger, better crime that ruins his or her victimizers. In The Switch, for example, a woman is abducted and held for ransom, but this bored, restless housewife, embittered by her husband’s many petty cruelties, joins forces with her captors to dupe her ratty mate — it’s a female–Walter Mitty fable played for keeps. In 52 Pickup, beetle-browed business- and family-man Harry Mitchell is blackmailed by three men on the fringes of the porn industry. They kidnap Mitchell’s lover and make her the object of a snuff film. Instead of caving in, Mitchell not only tells his wife about his affair and its horrible aftermath, but the two of them go after the thugs. The novel says as much about a strained-but-surviving marriage as anything in Updike or Franzen, but comes equipped with a smash-up climax.

Early on in Leonard’s best novels, there’s often an exhilarating period when you can’t tell where your sympathies are supposed to land: the first few chapters not only offer up the donneé of the thriller plot, but also spend a while picking, choosing, and discarding characters — a cop who looks like a pip of a fellow in Chapter 1 gets blown away in Chapter 3 so that a seedy hood flitting around the back alleys of the story can step into the glare of Leonard’s admiring prose.

This lovely trick of Leonard’s — the ability to keep you in the dark about not only where the story is going but also who the hero is — adds great force to both the violence that rears up regularly and the grace notes of romance that resound in so many of his male-female couplings. One of the finest aspects of the TV show Justified — based originally on a couple of his short stories and subsequently inspiring his best latter-day novel, Raylan — is the sweet but fraught tension-and-release experienced repeatedly, each time with subtle changes, by Timothy Olyphant’s Raylan Givins and Natalie Zea’s Winona.

No wonder Leonard loved that TV series more than any other adaptation of his work: It captures not only his take on humanity and his plot-mechanism tradecraft, but also understands that, beneath the just-the-facts-ma’am dialogue, there’s a world of tentativeness and tenderness in the people he created. In the series’ second episode, Raylan and his colleague Tim Gutterson, a sharpshooter trained in the Afghan war, are advancing upon a house containing hostages and guns. Raylan is of a mind to plan strategy.

“You got a story for our Dupree?” he asked Tim about the man inside with a gun.
Tim: “Yeah: If he moves, I shoot him.”
“That’s a good story,” said Raylan.

Another victory for Elmore Leonard–style narrative: low-key but tense, funny only up to the point where Tim has to put a bullet in Dupree.

It’s like the moment in Leonard’s 1976 novel Swag (a.k.a. Ryan’s Rules) when Frank Ryan and Ernest “Stick” Stickley discuss a new partnership: holding up stores. “I’m talking about simple everyday armed robbery,” says Frank mildly. (No one raises his voice in a Leonard novel unless he needs to be heard over gunfire.) “Supermarkets, bars, liquor stores, gas stations … I see how two guys who know what they’re doing and’re businesslike about it, who’re frank with each other and earnest about their work, can pull down three to five grand a week … ”

Elmore Leonard didn’t go in for italics very much, so you know that italicizing frank and earnest — those words meant something to him. For us, they summarize the world he created, his approach to fiction and, it seems, to his life.

Ken Tucker is a critic for National Public Radio. He has written about pop culture for, like, years.

Afternoon Links: The Future of Movies, in 1990