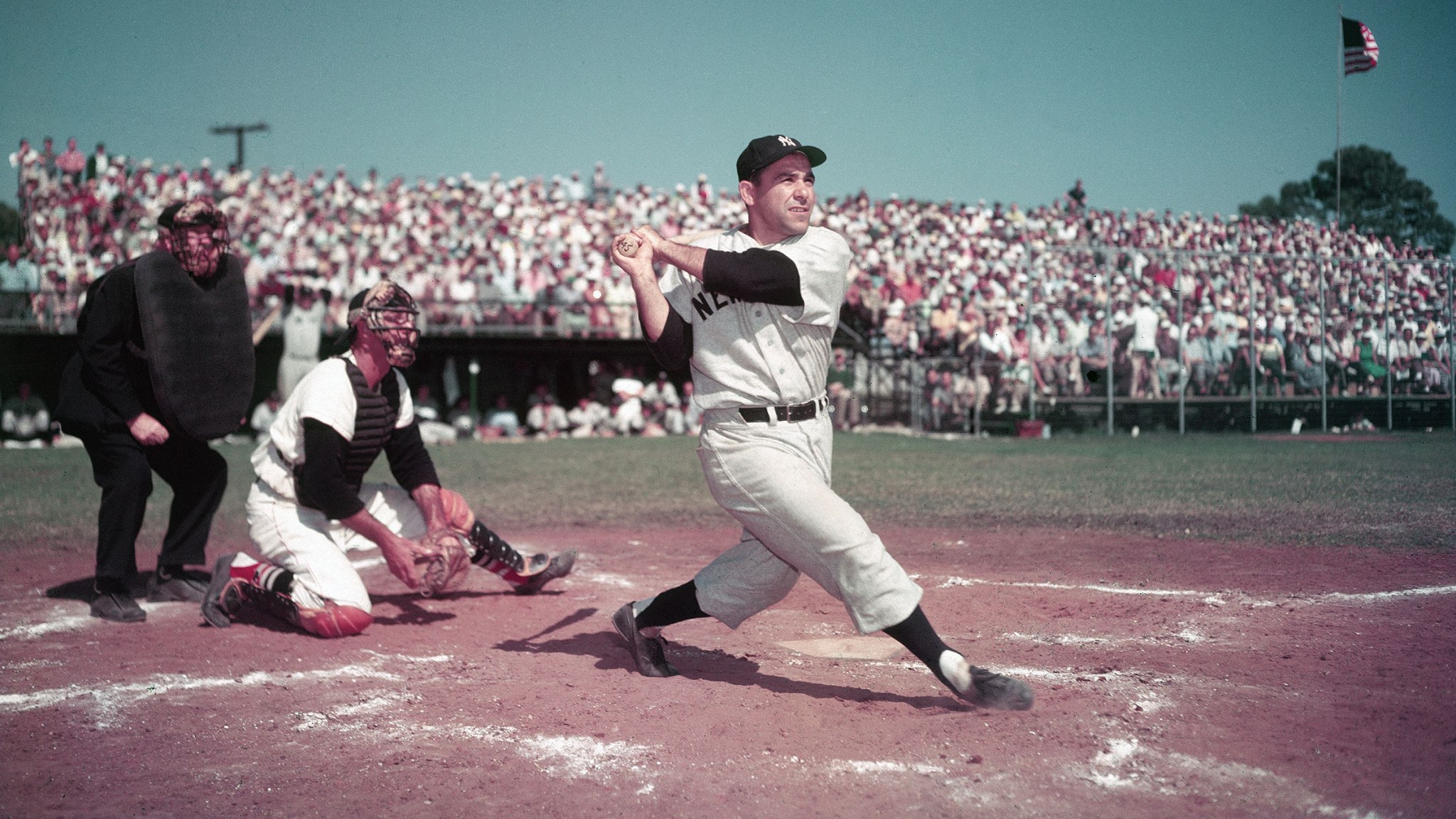 Yogi Berra died last night at the age of 90. We’ll get to Berra the quote machine shortly. First, let’s start with Berra the baseball player. Because, man, could he play.

It’s enough of a grind being a catcher in today’s game. But the demands placed on players in Berra’s era were especially cruel. In a 19-year career that started right after World War II (Yogi served his country before joining the New York Yankees) and ended in the middle of the Vietnam War, Berra and his peers didn’t yet have the luxury of charter jets and other perks of contemporary travel. Scheduling was brutal. Sophisticated training and nutrition were decades away from reaching major league clubhouses. Add in the extra strain placed on players forced to don the tools of ignorance and you had the perfect recipe for catchers’ bodies to break down.

If any of that affected Berra, it never showed. In his prime years, from 1950 through 1956, he never played in fewer than 137 games, and twice topped 150, at a time when the season was only 154 games long. Doubleheaders happened frequently, and he caught both ends of twin bills 117 times. Take one look at his gnarled fingers and you’ll know that he never had it easy.

Even with that damaged body, he could really, really hit. A 5-foot-8, 195-pound powerhouse, Berra finished every left-handed swing with a high, looping, windmill flourish. That unique swing generated not only ample pop but also phenomenal contact skills. During his breakout season in 1950, a 25-year-old Berra batted .322/.383/.533, knocked in 124 runs, scored 116, crushed 28 homers, struck out just 12 times, and played in all but three games.

That was just the start of an incredible offensive run. During his 1950-56 peak, Berra’s park-adjusted numbers came in at 32, 28, 35, 40, 37, 22, and 39 percent better than the average line for an American League batter — let alone a player who destroyed his knees and hands behind the plate every day. In those seven seasons, he won three MVPs and never finished lower than fourth in the voting. From 1949 through 1958, Berra cranked 20 or more homers every year. From 1948 through 1962, he netted 15 straight All-Star appearances.

Just 10 catchers1 in baseball history have stepped to the plate at least 8,000 times, and Berra was one of them. Among those 10, only Johnny Bench and the criminally underrated Joe Torre were better hitters by advanced, park-adjusted metrics. Berra’s more traditional career numbers were pretty great, too: .285/.348/.482, with 358 homers, 1,430 RBIs, and 1,175 runs scored, plus nearly twice as many walks as strikeouts.

Like Derek Jeter after him, Berra owes some of his impressive counting stats and his many World Series rings to the great teammates around him. Yet as with Jeter, it goes both ways: Without Berra’s presence in the lineup, behind the plate, and everywhere else, those teams almost certainly wouldn’t have won as often they did. The Bill Russell of baseball, Berra won 10 World Series in his 19 seasons. The most famous moment in that incredible run came in 1956, when Berra caught Don Larsen’s improbable perfect game in Game 5 of the Fall Classic. Yogi swung the bat pretty well in the ’56 World Series, too: .360/.448/.800, with three homers, 10 RBIs, and one strikeout over seven games.

While older Yogi might’ve resembled a lovable mascot, both his words and deeds pointed to an exceedingly smart man. Earlier today, Baseball historian Mark Armour shared a couple of telltale stories on his Facebook page. In one, he described Berra’s knack for connecting with his pitchers. One day before a Yankees–Red Sox game, Berra asked a young, confident, left-handed teammate how he wanted to attack legendary slugger Ted Williams.

“Well, with big left-handed hitters I like to jam them high and tight, and then throw a curve low and away,” the young pitcher said.

Berra never got enough credit for his accomplishments as a manager, either. As Armour noted, Berra led the hard-partying 1964 Yankees to 99 wins and the AL pennant. He got fired anyway, because that team kept right on partying. And they collapsed the next year, winning just 77 games. Eight seasons later, Berra got a second chance — this time with the Mets, the team with whom he’d ended his playing career. In his second season at the helm, he led that club to the NL pennant, despite carrying a talent-challenged roster. When the team later sagged due to that glaring lack of personnel, Berra got canned again. Then in 1984, Berra was back in the Bronx, and he led the Yankees to 87 wins in a competitive AL East. When the Yanks started the following season 6-10, George Steinbrenner fired Berra without notice, because those were the days when the Yankees owner was at his most impossibly trigger-happy. While his managerial career ended then, as Armour suggested, you wonder how Berra would have fared if he’d ever gotten a real shot with a stable organization.

And yes, we need to talk about Yogi’s words of wisdom. From “When you come to a fork in the road, take it” to “Baseball is 90 percent mental and the other half is physical,” the classic self-negating silliness is what Berra became known for. His most famous quote became ubiquitous in our culture, and even carries an inspirational tone: “It ain’t over till it’s over.”

Another beaut: “Love is the most important thing in the world, but baseball is pretty good, too.”

Still, if I had to pick one Yogiism that should endure, it would be a slightly more obscure quote. This line spoke to his relentlessly optimistic worldview, to the positive outlook that fueled his 65 years of happy marriage, his ability to inspire greatness in others, and his status as not only a baseball legend, but also a lovable cultural icon for all time.

The Cub-ler-Ross Model: How Pirates Fans Can Cope With Wild-Card Angst