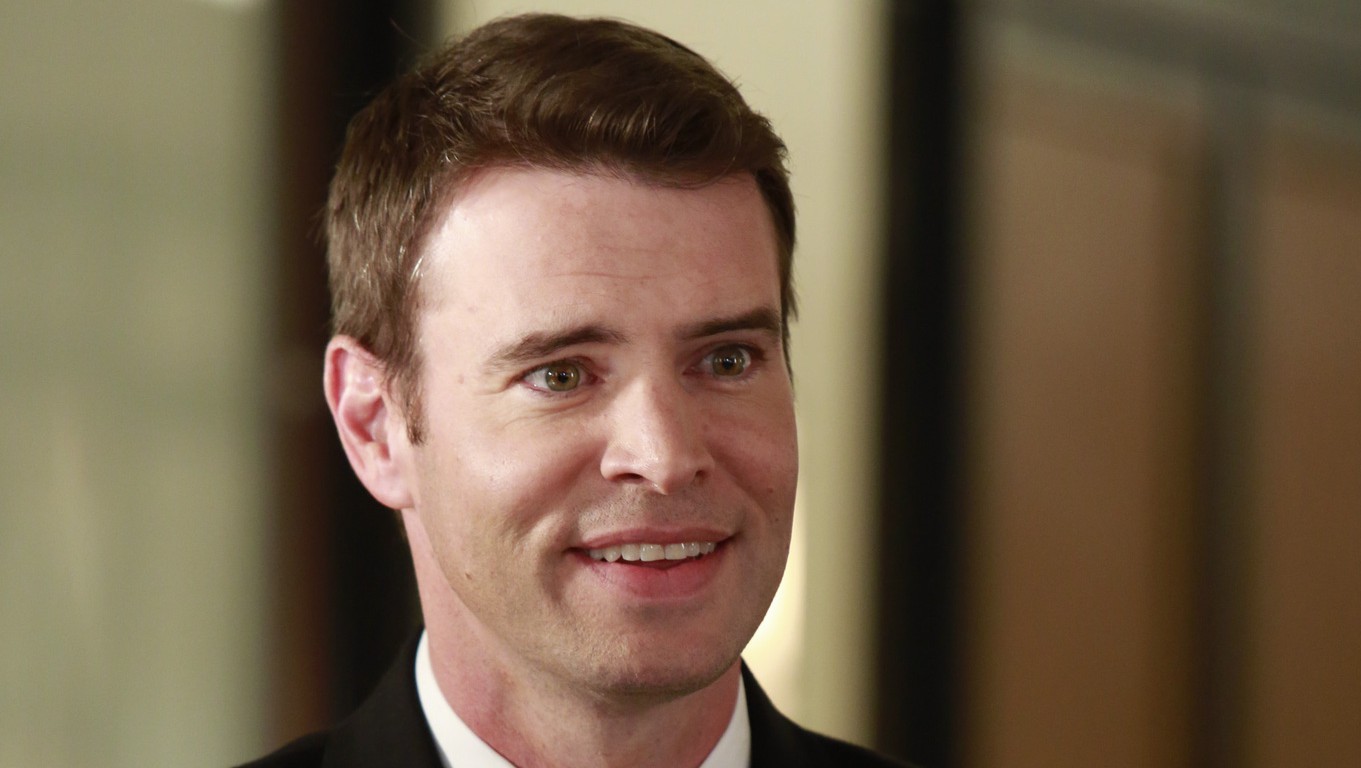 Call me biased, but it’s always been difficult to make the case for Noel Crane over Ben Covington on Felicity. Scott Speedman’s Ben spoke with brevity and effortlessly wore flannel far before its hipster heyday. Scott Foley’s Noel was an avid Mac user before nerd culture suffused all of culture. Noel simply was not the one. Yet, while Ben and Felicity are the show’s enduring couple, Foley is possibly its most successful alum. Sure, Keri Russell has The Americans, an appearance in Mission: Impossible III, and the critically beloved Waitress. But Foley followed up Felicity with a slew of TV gigs that included Scrubs, Cougar Town, Grey’s Anatomy, and now Scandal, on which he again plays one corner of a love triangle. If you’re keeping track, this means he’s firmly planted in the TV universes of three mightily respectable showrunners — J.J. Abrams, Bill Lawrence, and Shonda Rhimes.

Foley’s Scandal character, Jake Ballard, has evolved from “Not Fitz” into “Legitimate Contender to Win Over Olivia Even If He Is Involved with Covert Operations Like Her Father.” We last saw him on television dancing in Olivia’s living room, moments before she was abducted. But serving as television’s go-to Other Guy is not all that Foley is interested in. He recently wrote, directed, and starred in the indie movie Let’s Kill Ward’s Wife, which is about killing a character named Ward’s wife. The black comedy, available on VOD, allowed Foley to flex his muscles and show off what he has learned from nearly 20 years in television, and it allowed us to asking some lingering questions about Noel Crane.

How is Let’s Kill Ward’s Wife being received so far?

Since this is your first feature that you’ve written, directed, and starred in, what has been the biggest challenge?

Click here for all of our interviews with fascinating people from the worlds of sports and pop culture.
The whole thing was a huge challenge, to be honest with you. The biggest challenge was the amount of hats that I was wearing. Once we realized that we had the money to shoot this thing, we didn’t really have money to hire any outside people. It was me and a couple of buddies producing this film, me making sure that the script was respected. And then hopping in front of the camera and acting. I lost like 12 pounds doing this.

How difficult was it to make changes to your original script?

It was really tough. I had a very clear vision as the writer about what I wanted to see onscreen. Luckily, we were able to shoot the entire script. Getting into the editing room, things change, and that’s really where the bulk of directing happens. As great as it was in my head, some pieces didn’t flow and some really worked. There was some stuff with my character, Tom, and these fantasies he had. They just weren’t working for whatever reason — time and pace. My acting was not great.

I found myself in the middle of a scene thinking about directing: We’re doing this scene right now. In the next take, I want to do it this way. It was very hard for me to stay in character.

I worked with Greg [Grunberg] on Felicity, and Donald [Faison] on Felicity and then … on Scrubs. Patrick Wilson is my brother-in-law — we married sisters. His wife plays the woman I kill in the film. My wife plays his wife. It was a family affair. That’s one of the reasons we were able to do this — because everyone was willing. When you do a film at this budget, you’re not going to get a Donald Faison, a Patrick Wilson, or even a Scott Foley. But because we’re all friends, we knew there wouldn’t be trailers. You’re going to be sitting on a cooler in the kitchen waiting to shoot for an hour and a half. That made it very doable; that part was easy.

Because they all know me, they all know my sick, twisted sense of humor. Getting the tone right was a lot easier. I didn’t have to explain, “You can’t be shocked when she’s dead.” They all got that just from reading the script, which was great and where I think the tone started. If you didn’t understand what the film is about before the tone of how they react when she’s dead, you get it.

Felicity fans, me included, are excited about a quasi reunion of you, Tracy, and Sean. Do people still talk to you about Felicity all the time?

It is so good. Every now and then I’ll go back and think of a certain scene, and I’ll go back and watch a little bit. It is still one of my favorite shows of all time. That’s the kind of television I love — great relationship drama, interpersonal stories. There’s not enough of it on TV now.

Do you have a favorite episode?

My life was so changed by the pilot. I remember reading it for the first time. I remember specific scenes and moments, filming it with Keri and Matt [Reeves] and Scott and Amy Jo Johnson. It has to be the pilot or the last episode, which I still tear up at when I see it. It breaks my heart. You’re hearing this music, but you don’t hear Greg Grunberg saying anything. And the camera is moving over us as Sean [Grunberg’s character] is giving a toast to the group. Greg was actually saying, “Scotty Speedman, it’s been such a pleasure working with you … And Foley, you’re just a jerk and I love you … And Keri Russell, I’ll miss you forever.” They said “cut” on that, and we all got in our cars and drove home. It was the last I saw everybody together. I still love it, and it still breaks my heart.

Do people like Jake Ballard or Noel Crane more?

[Laughs heartily.] I’m gonna go out on a limb and say people like Jake Ballard more.

People fell hard on either Ben or Noel lines, and it was hard to cross.

I agree. In the beginning, people hated Jake Ballard and they hated Scott Foley for playing Jake Ballard.

Yes, and I think that’s a great thing. Anytime anyone gets passionate over a character you’re playing, I think you’ve done your job well. Thank you for hating the characters I play! I think people have come around a bit, thanks to Shonda and her ability to one week lift characters up and take them down the next. Jake is on a bit of a high roll right now. I’m sure it’s going to come crashing down pretty soon.

Jake has had one of the more unpredictable arcs on the show.

They wove Jake and B-613 into the story line about her father being in B-613 and her mother being a terrorist. The importance of that in Olivia’s life is why they’re able to give Jake a story line like this. One minute he’s this good guy, and the next he’s spying on her. Then he’s killing Cyrus’s husband, but he did it for the Republic!

Sure, a good patriot.

There’s justification in all his actions.

I’ve been lucky enough in my career to work with a few people who are really prolific. If you look at J.J. Abrams and Matt Reeves, they both wrote the Felicity pilot, Matt directed it, J.J. went on to direct a few episodes, and J.J. is now the biggest director out there at the moment. Between him, Bill Lawrence [showrunner of Scrubs and Cougar Town], and Shonda, I’m really lucky. All three I look to as mentors and really respect what they’ve done and hope to emulate a lot of that.

How has the evolution of the showrunner role affected you as an actor?

I am a student of this business. I’m really interested in it. When I was younger, I was always the annoying one. What’s that? What’s that do? What is that called? Why aren’t you doing this? I think it got very annoying. I’d sit in J.J.’s office when he was taking phone calls or taking meetings. He was great about it. Shawn Ryan, when I was doing The Unit, was an amazing writer and someone who runs a writers’ room so beautifully. Then he has the ability, as Shonda Rimes does, to sit in the editing room, not afraid to completely change the script that he wrote.

I really respect the showrunners who are the be-all end-all of the creative process. There are a lot of people under them who do a lot of work and add to that, but it’s the showrunners’ vision. Their idea on the page. Their vision on the screen. To be able to have worked with these people, and see the rise of the showrunner in the past 10 to 15 years, it’s really an amazing time to be in television.

Of all the TV shows on your résumé, which has the craziest fan base?

Scandal, by far. It’s the craziest because of the time we’re living in. It might have been Felicity had we had the Internet back then, had Twitter been a thing, had we had the constant interaction with fans. Scandal fans now have the ability to project their feelings and desires and opinions directly onto you. Scandal fans are dedicated, loyal believers — gladiators, as they call themselves. It’s rare these days to have that sort of hype about a television show. I love House of Cards, but you’re not seeing people freak out about House of Cards. Scandal just has this rabid fan base. That combined with social media makes it the most passionate group that I’ve dealt with.

Do you think there’s a uniform tone across Shonda shows?

Shondaland is amazing because the quality is so high in all the writing. Because I’ve done so much, I’m able to say that that’s the case. I was on Grey’s, and I remember sitting at a table read thinking, This show is so good! How is this show still so good?

Henry breaks your heart [Foley’s heart-problem-afflicted character who married Kim Raver’s character, and then dies on the operating table]. More people like Henry more than anything I’ve ever done. There was something very sweet and heartbreaking about him at the same time.