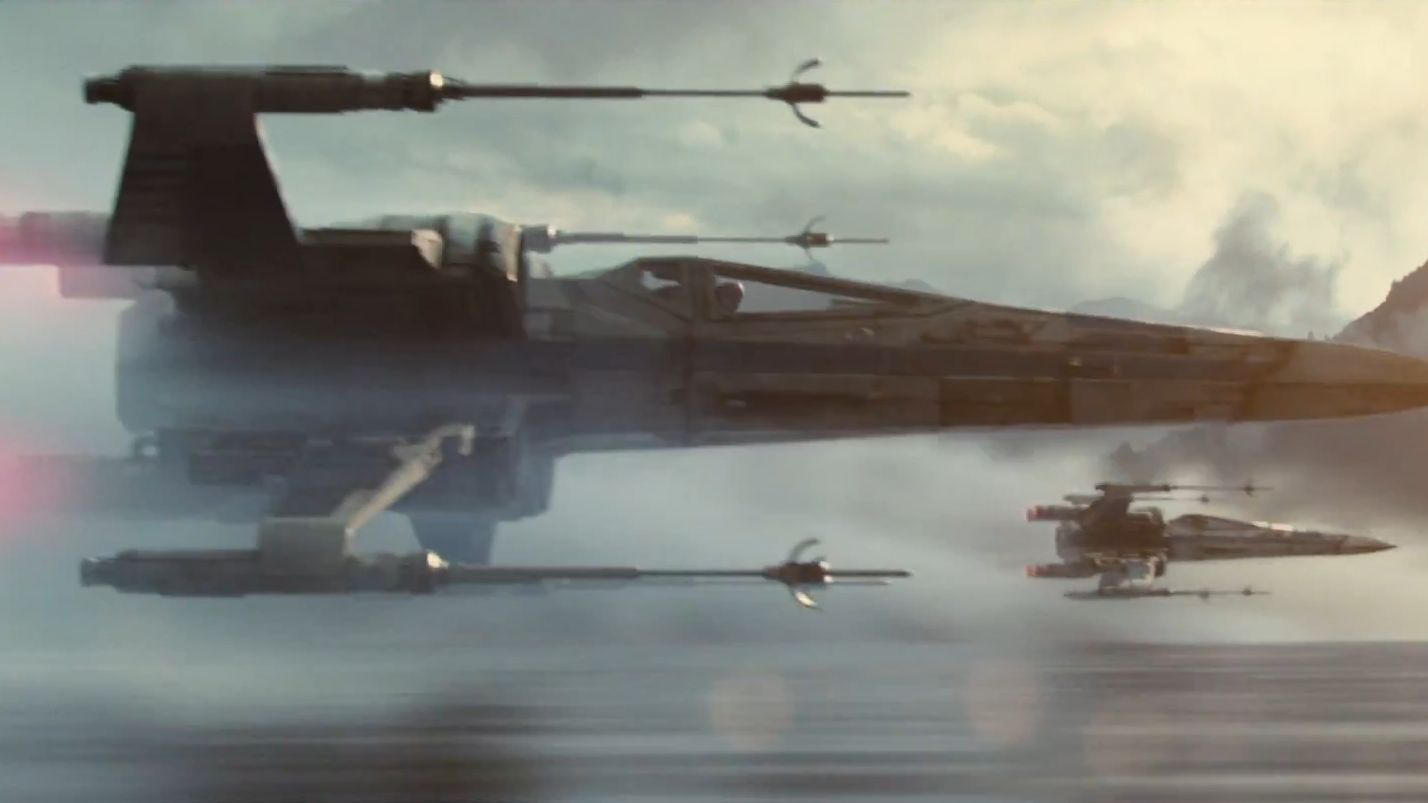 One of the first sights in the new trailer for Star Wars: Episode VII – The Force Awakens is a massive, collapsed spaceship, gray and imposing like the remains of a city — looking, in that way sci-fi can, at once both ancient and futuristic.

Because Star Wars is part of the cultural vernacular in an almost scriptural way, many recognized the ship as a Star Destroyer, the flagship cruiser of the Imperial fleet — mega bad news if you see one coming your way. By sticking that ship in the dirt, The Force Awakens writer-director J.J. Abrams follows a path mapped out in his previous films, most prominently the installments of the rebooted Star Trek: He’s grounding his space escapades in our world, or at least in a recognizable version of it.

As a visual stylist, Abrams’s name has become married to lens flare, a silly and superficial effect he’s employed with great enthusiasm in his work to date. 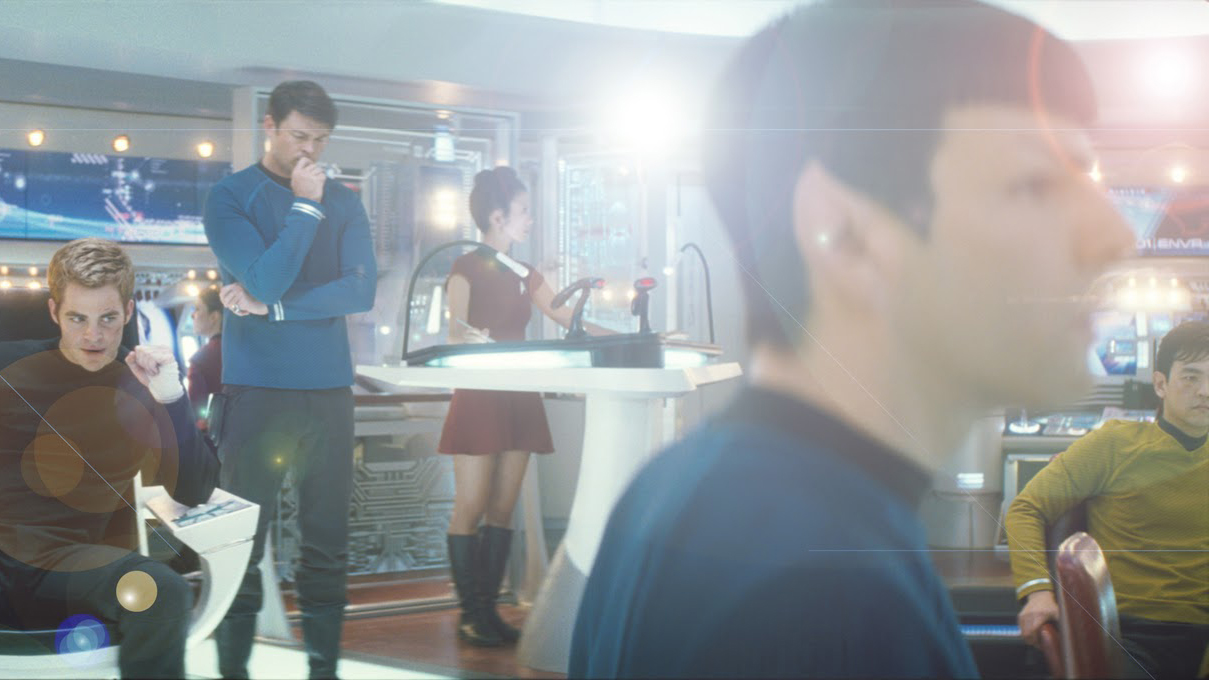 It got bad enough, Abrams said, that he once showed his wife a scene from an early cut of Star Trek Into Darkness, and her response was, “I just can’t see what’s going on.” But in the Force Awakens trailer, there’s something else at work. It’s a pair of techniques that Abrams has employed just as prominently as lens flare in his career so far — visual gestures that tell us far more about what his ambitions are for this movie.

After Abrams shows the broken-down Star Destroyer, we fly through a not-unfamiliar montage of shots that also function as a reentry into the Star Wars universe: the cockpits of X-Wing fighters, the corridors of starships, fascist exhibitions of what was once the Empire’s newfound power, lightsabers, droids, Harrison Ford grinning like he just raided your liquor cabinet. In the process, Abrams and his longtime director of photography Dan Mindel present an aesthetic and dynamism much closer to the look of their Star Trek movies than to any Star Wars we’ve seen yet.

First, there’s prominent use of snap zoom, with the camera finding an object and then zeroing in on it fast.

Second, Abrams employs a handheld quality, a go-to for war movies: Just watch the D-Day scene in Saving Private Ryan. Handheld is a play for verisimilitude; it’s designed to not only bring the viewer closer to the action, but also to make viewers feel like they are in the action — like their point of view could be that of an anonymous character struggling to stay alive.

Snap zoom, meanwhile, creates a hectic sense of activity, an urgent need; its function isn’t to create veracity so much as a heightened feeling of chaos. In both Star Trek and its sequel, the camera never stops swirling: Even during scenes on the bridge, with James T. Kirk seated in his chair and the crew arrayed around him, the camera rotates around the scene, proceeding from character to character, often in the same shot. Abrams’s visual priority is, above all else, movement.

The early Star Wars films that were directed or produced by George Lucas often felt more like fables than anything else; comparing them to real life would’ve been like wondering why your dog doesn’t talk. The three directors of Episodes IV, V, and VI all employed a relatively static camera that served to frame the bizarre, incredible things happening in front of it. Maybe it would pan along with the characters walking or the ships flying toward it, but the camera itself rarely moved. It’s a stately and baroque style, well suited to the original trilogy’s fairy-tale nature.

What The Force Awakens trailer suggests, then, is that Abrams will work to bring Star Wars down to earth, just like that Star Destroyer. In Star Trek, he did this literally, locating us in cities like London and San Francisco, showing a Starfleet craft under construction in the middle of a cornfield. Of course, Star Wars takes place a long time ago, in a galaxy far, far away. So instead, the priority appears to be making that universe vivid and relatable, in a visual language we can comprehend as our own. Without any cinematic dialogue to go on outside of Han Solo telling Chewbacca, “We’re home” — I don’t doubt that there’s exegesis longer than the Church Dogmatics floating around on that already — it remains to be seen how far Abrams will take this ambition. Hopefully, it’s somewhere short of “Kirk’s allergies,” but even if its just contained to style, that’s significant.

What makes this even more interesting is the prospect of Episode VIII, helmed by Rian Johnson. Rather than strive for a return to normalcy, Johnson, in his films Brick and Looper, contorts normalcy into whatever headspace he’s occupied. In Brick, that meant teenagers who talk like L.A. gumshoes; in Looper, it meant Americana if Blade Runner were a documentary. Abrams and Johnson have made very, very different types of movies to date, with different visual and narrative styles and different preoccupations. It’ll be fascinating — not to mention extremely important to people with a comical amount of money in play — to see how those differences coalesce.