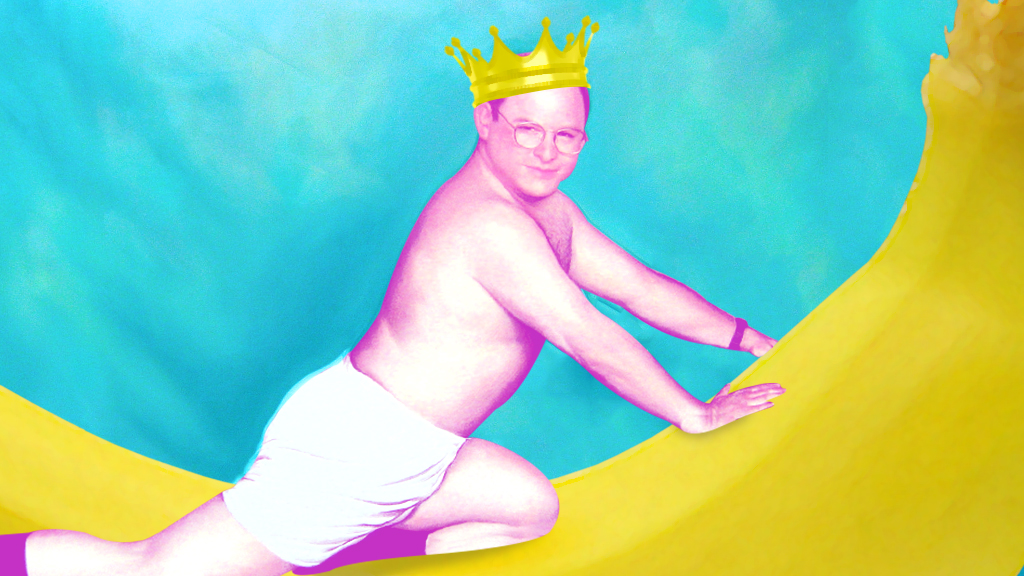 A lone figure — a round figure, and squat, like a bowling ball abandoned at the base of a snowdrift — approaches the wintry northern border, ready for battle. The low winter sun, now just peeking over the horizon, gleams off the top of his head, because he forgot his hat, who can remember the hat, always with the hats now? The combatant checks his watch. Takes a bite of the pastrami Reuben he’s carrying. Checks his watch again. Taps his foot impatiently, jiggling the cuff of his khakis. Sighs. He’s got nowhere else to be but doesn’t have all day, on principle: You’re on time, they’re on time, that’s the way it’s supposed to go. Why even pick a time if people aren’t going to show up then? He can feel his blood pressure rising at the thought. He takes another bite of the Reuben. It’s not bad, even cold. Are cold Reubens even a thing? They could be a thing.

A red-jacketed army, mounted atop a fleet of hearty steeds, finally appears across the plain. The agitated warrior taps his watch. The army shrugs in unison, a well-oiled apology machine drilled on weapons-grade contrition. Sorey.

It’s time. The fighter charges ahead.

Well, maybe not charges. Shuffles. With moderate purpose. Forward, though. That’s something, to go forward, at any speed. Nobody said you had to run.

He’s halted three steps into his advance. Their leader doffs his felt campaign lid, shouts across the field.

A white flag waves. Then dozens of them. They’ve practiced this. It’s magnificent in its own, sad way, an undulating alabaster wall of preemptive capitulation.

The solitary man throws up his hands. He came all the way up here for this? Couldn’t he have just stayed in Manhattan, waiting for a concession call? They don’t have phones in Canada?

He shrugs, turns, and begins the long journey home.

Whatever. He’s still got half a cold Reuben left.

It could totally be a thing.

You could eat a cold Reuben during sex.

This could be huge. 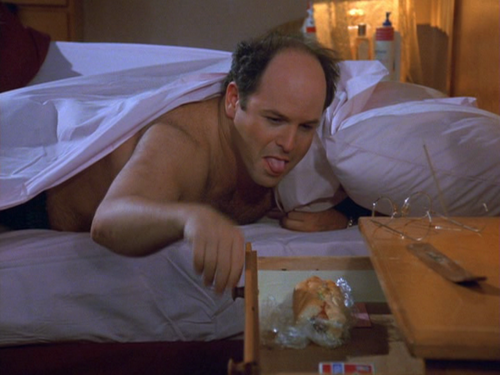 And so Grantland’s Second Banana bracket comes to a close, with George Costanza, a single fictional man, plodding roughshod over an entire nation, taking down Canada 6,014 votes to 3,832. All hail the ultimate avatar of curdled American individualism — lazy, entitled, hair-triggered — returning triumphant from the vanquished semi-socialist paradise he has just out-sidekicked in the petty battlefield of our minds, wearing its ignoble surrender like a toque. The hat, now he remembers the hat. It’s a nice hat! There’s a pom-pom, you always like the pom-pom.

Weren’t we all expecting more of a fight? Maybe we shouldn’t have, given Costanza’s average margin of nearly 12,000 votes through the first five rounds of the tournament. He routed a pro wrestler. Outdueled Paul Simon’s exiled wingman. Dominated the world’s most overrated and least versatile condiment. Deported Super Mario’s beanpole brother. And, most shockingly, pawned Scottie Pippen’s six championship rings, because who earned them, really, the (more or less) selfless facilitator or the greatest competitor in professional sports history he ran alongside? Costanza was, from opening tip to banner-raising ceremony, a juggernaut in high-waisted pants, in retrospect the closest thing to an inevitability in a contest made up of gladiators who’d never choose to step out into the arena on their own. He is our true Number Two, because there are no Number Ones here. We’re mailing his trophy to Jerry Seinfeld. He can visit it whenever he likes.

Canada, though ultimately a disappointment in anticlimactic defeat, had a good run, even if you weren’t convinced to grant them bracket immortality by our patriotic argument of two days ago. It seems consistent with the spirit of this whole enterprise to recognize the accomplishments of the also-ran, no matter how frustrating the final result. And so we pause to salute their march to near-greatness, their shrugging off, in short order, of Minneapolis’s parasitic twin, Johnny Carson’s personal laugh track, Mick Jagger’s unkillable riffmaster, Dirk Diggler and Ricky Bobby’s backup cocksman, and Captain Kirk’s logic-loving bridgemate. Worthy adversaries all for the sleeping giant reclining politely to our north. Mr. Costanza thanks you for finally showing up.

Now, if we’ll all excuse him, he’s got a cold Reuben to eat while boning somebody he doesn’t even like that much. Even in victory he knows not to push his luck too far. 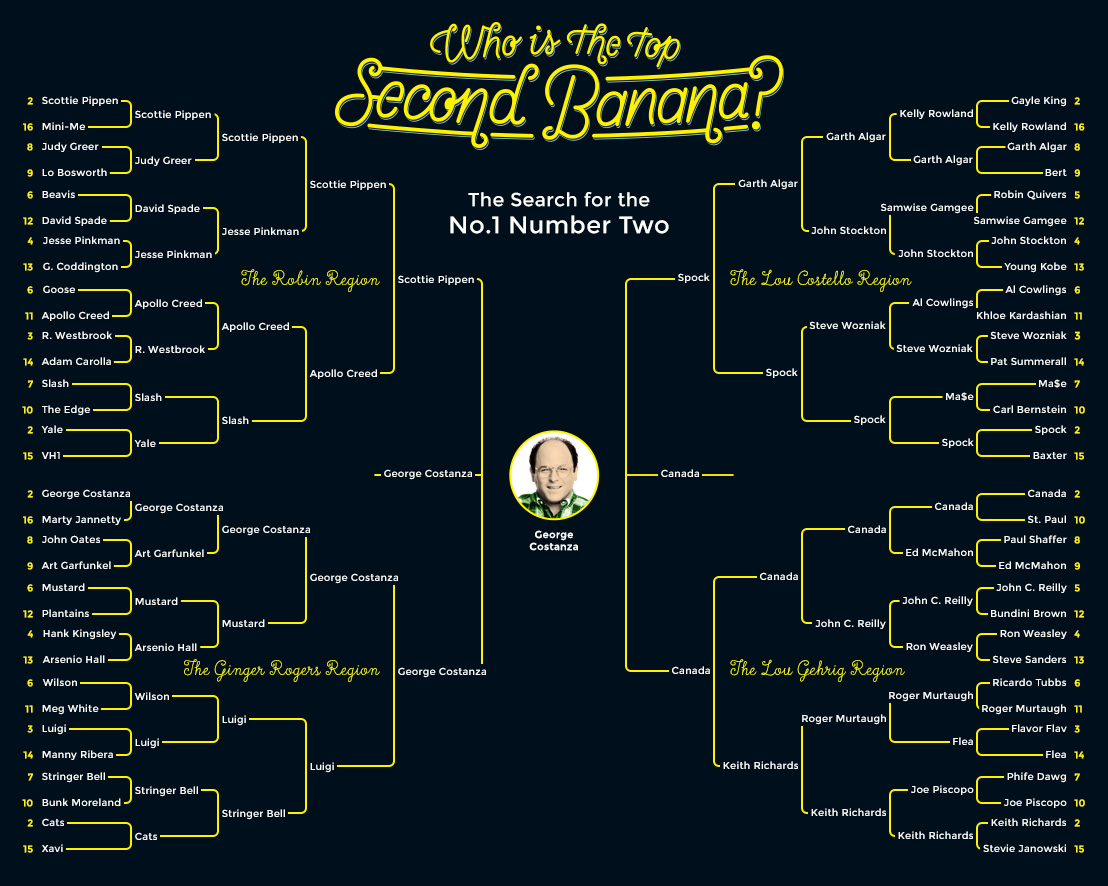 Round 1 : Costanza vs. Marty Jannetty

Round 2: Costanza vs. Art Garfunkel

Round 3: Costanza vs. Mustard

Round 4: Costanza vs. Luigi

Round 5: Costanza vs. Scottie Pippen

Round 6: Costanza vs. Canada

Back-ish: ‘Focus’ and the Partial Return of Will Smith

‘Reddit, Help Me Find Some Peace in Dying Young’: Cryonics, Futurology, Death, and a Wish