The Second Banana Cop Matrix: A Definitive Guide to Who You Should Call for Backup 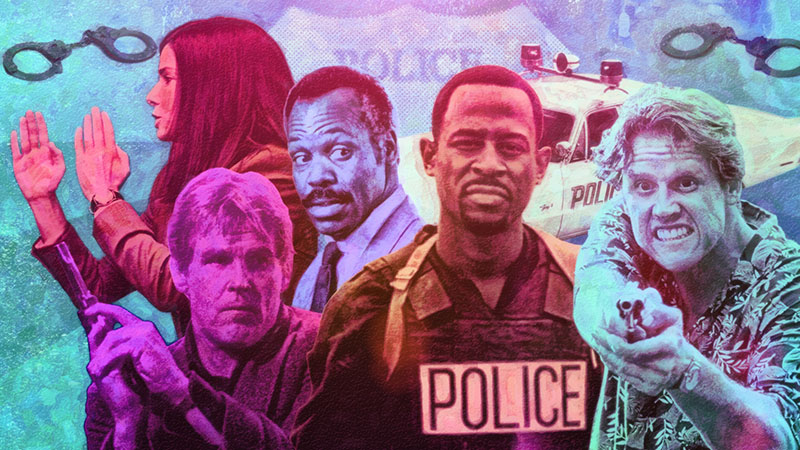 This is not a difficult thing to understand. In fact, I’ll make it clear in the least difficult form I can think of, which is to answer fake questions that I’m asking myself.

What you will be looking at is the Second Banana Cop Matrix.

What does the Second Banana Cop Matrix do?

It charts the locations of 22 separate second-banana cops, placing them in quadrants based on approximate age and preference for order or anarchy.

What qualifies someone as a second-banana cop?

In some instances, it’s as simple as rank, like with Officer Jake Hoyt and Detective Alonzo Harris in Training Day. That’s how that went.

When cops are of the same rank, as was the case with, say, Detective Axel Foley and Detective Billy Rosewood in Beverly Hills Cop or Point Break’s Special Agent Johnny Utah and Angelo Pappas, then the second-banana position is given to whomever appeared less in control or had less of a presence, regardless of seniority.

That same guideline was used when law enforcement officials from different agencies were paired together, as with Special Agent Bobby Trench and United States Navy Petty Officer Michael Stigman in 2 Guns, and let me say real quick that I’ve seen 2 Guns about six times and I had no idea what Denzel’s character’s name was, nor Mark Wahlberg’s character’s name, until I made this matrix. I always watched the movie like, “Ooh, I CANNOT believe Denzel is gonna give up Wahlberg like that.”

In the event that a cop was paired with someone who wasn’t a cop — Turner & Hooch (paired with a dog), Last Action Hero (a kid), Stop! Or My Mom Will Shoot (a mom), Die Hard: With a Vengeance (a pawn shop employee) — whoever wasn’t the cop automatically defaulted to second banana. The only exception here is Officer Jack Cates in 48 Hrs., because Eddie Murphy is Eddie Murphy.

How were the second banana cops chosen?

I don’t see my favorite cop on the chart. To whom should I email my complaint?

This started out sounding legit but is devolving pretty quickly. Five questions ago you were accurately explaining quadrants and matrices and now you just answered with “Yo mama.” Perhaps we should just get to the matrix? 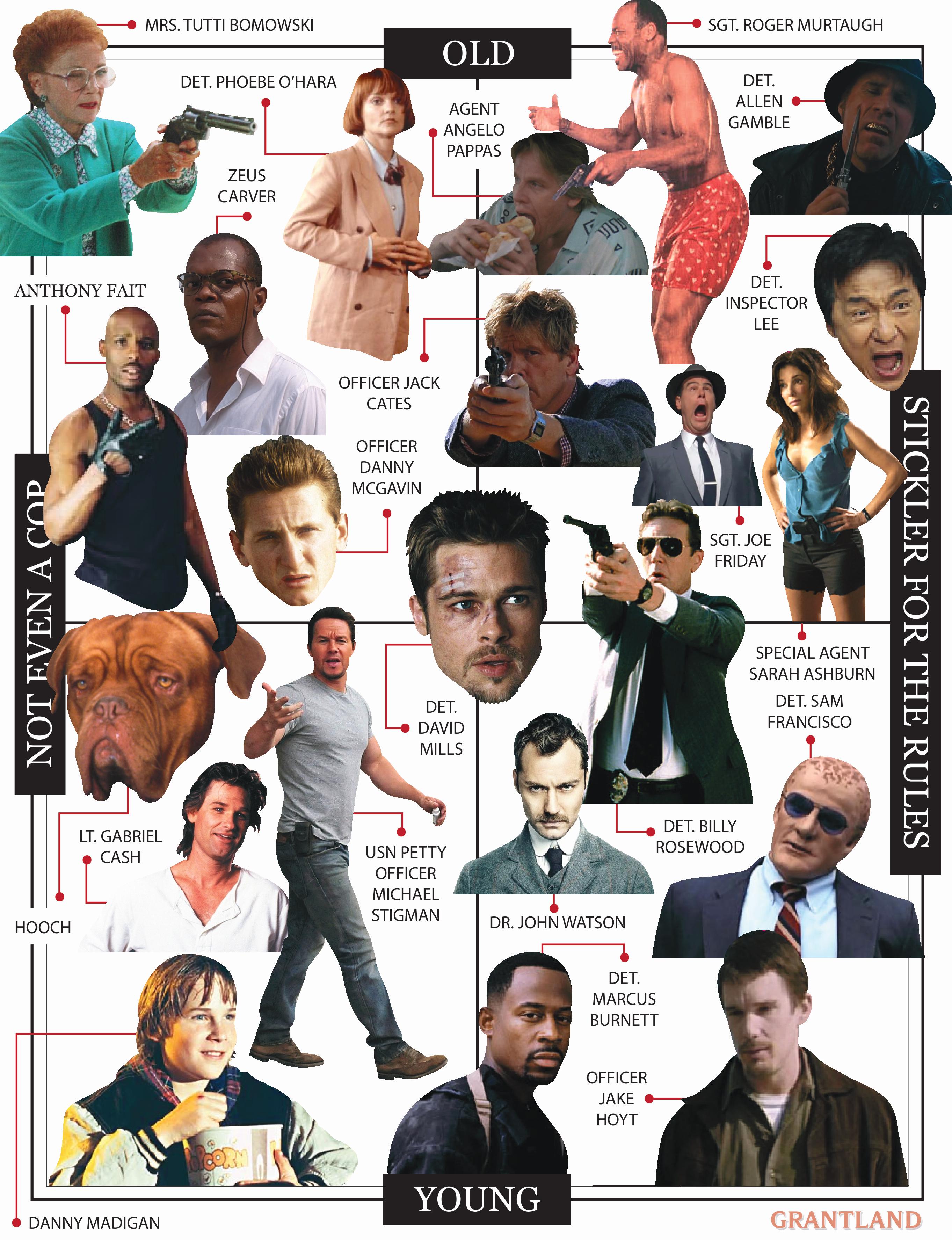 Why is Tango & Cash’s Lt. Gabriel Cash so close to the Not Even A Cop end?

He spent a majority of the movie thought to be a criminal, that’s why. He was framed, for sure, but still. Also, I don’t imagine he’d have been terribly offended by the classification anyway. He was the “loose cannon” cop to Stallone’s straight-edge role, and basically all they did to turn Stallone into the straight-edge cop was give him some glasses to wear, like rappers — and NBA coaches; shout-out to Scott Brooks — do when they want to appear smart.

Wait. OK, so then why is the lady cop from Kindergarten Cop closer to the Not Even A Cop side than the Stickler For The Rules side? She didn’t spend any time in the movie in prison. Mostly she was just in a motel.

It’s a sliding scale. She was a cop, but I want you to remember that, at the end of the movie, when she’s having a hard time apprehending a grandma, she just hits her with a car and that’s how she catches her.

Stop! Or My Mom Will Shoot?

I said the same thing. I guess they were just making movies about anyfuckingthing in 1992.

That’s easy. It’s the scene in Point Break when Special Agent Pappas asks Utah to go get him two meatball subs. After a moment of hesitation, Utah agrees, and right as he starts to walk away Pappas leans out the window of his car, calls Utah, then, in a perfectly metered cadence, says, “Utah … get me two.” Here it is:

I hope Gary Busey was paid $200 million for his role in Point Break, because then that means he was only underpaid by $800 million.

Is that really the best second-banana cop scene?

Probably not. It’d probably be when Alonzo and Hoyt are sitting in the car in Training Day after Hoyt watched Alonzo rob and then kill Roger. Second-best is the toilet bomb scene in Lethal Weapon 2. (A thing I never understood in that scene was why they give Murtaugh a bomb vest. Because if I’m on a toilet and there’s a bomb on it and that bomb goes off and all of my bottom half gets exploded, then no thank you, I’m not interested in being alive anymore.) Third is a tie between the scene in Bad Boys II when Mike and Marcus answer the door …

… and the scene in Bad Boys II when Marcus is on drugs at the captain’s house.

Fourth is when Sam Francisco reaches into the acid ocean to save his partner in Alien Nation. Fifth is the “What’s in the box?” scene in Se7en. Sixth is the sce—

Yup. Alien Nation. James Caan gets paired up with an alien partner and they do normal cop things and it’s all very serious. The aliens are mostly very close to being human, one of the main exceptions being that ocean water is basically acid to them. At the end of the movie, Sam has to rescue Caan from death by reaching into the ocean and pulling him out. Here’s the craziest part, though, and you’re never even going to believe this: The guy who played Sam Francisco is also the guy who played Inigo Montoya in The Princess Bride. For real.

If you had to reverse-rank the second-banana cops from the matrix, what’s the order? Basically, who’s the weakest partner to have?

1. The kid from Last Action Hero, because he’s a child and the only child partner who’s ever been not terrible was Ernie Reyes Jr. in the TV show Sidekicks:

3. Officer Danny McGavin from Colors, because he was a dick.

Why weren’t any of the officers from the Police Academy franchise chosen?

Because they were super weak. The only exception is the guy who used to do the robot noises, and maybe the one very aggressive blonde woman. All the rest were goofs. It was too silly. And just wasn’t real enough.

Don’t you dare. I would give my life for Sam Francisco.