Back-ish: ‘Focus’ and the Partial Return of Will Smith 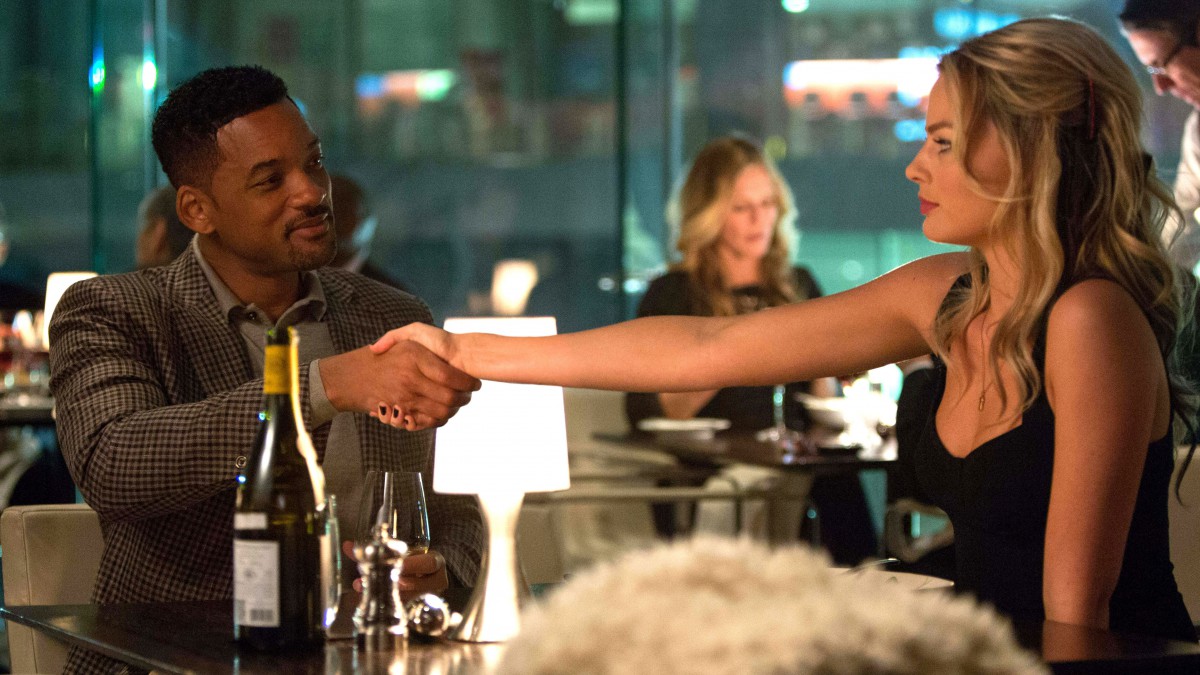 What kind of title is Focus? Is it a noun? A verb? A compact car? As it happens, the title refers to a con man’s stock in trade, which Will Smith explains to Margot Robbie one night while standing in the snow. With almost no effort, he’s suddenly got her watch, her ring, her sunglasses, her keys, and, I’m pleased to report, our attention. This is a delightful little caper comedy that asks very little of Smith, only for him to bare his breasts far more often than Robbie, who, in an upgrade from The Wolf of Wall Street, never bares hers.

The screenplay, by Glenn Ficarra and John Requa, who also direct, does a lot of the work for Smith, freeing him to fill rooms and bars and beds with laxness, swagger, and omniscience. The character is called Nicky Spurgeon (titles and names aren’t a strong suit here), and it’s the sort of part for which you need a star, since there’d be nothing for an actor to act. Most of the film is set in the ritzier climes of New Orleans and, purportedly, Buenos Aires, and Smith performs accordingly. You half expect to see a paper umbrella tucked behind his ear.

Nicky fakes being a chef to get a table at an exclusive New York restaurant, where Jess (Robbie) escapes a gentleman at the bar by asking Nicky to pretend to be her boyfriend. They wind up spending the evening together, at the end of which she asks him up to her hotel room, where, just in the middle of making out, they’re interrupted by an armed man whom she says is actually her boyfriend. It’s a setup, of course, one Nicky says he smelled hours ago as he watched her lift a wallet down at the bar. A lot of the comedy in Focus comes from Nicky being a light-year ahead of everybody else, especially Jess, whose obvious hustle he has a good time insulting. On his way out of her hotel corridor that night, he bellows his professional opinion: “You suck.”

Yet, for reasons that ultimately have a lot to do with where you stand on Margot Robbie, Nicky keeps tabs on Jess. He follows her around, points out her deficiencies as a pickpocket. He’s a long-con guy. She’s pitifully short. But he trains her, then whisks her to Louisiana before the Super Bowl (or this movie’s paltry version of it) and makes her part of his crew for a lucrative bonanza of petty theft. I’m not sure what to think of Robbie. This is the second time I’ve seen her work, and she’s game to make the most of her comeliness. At the moment, she’s an Australian who seems penned in by keeping up a credible American accent. The one she uses here is so flat and airy that you wonder if it’s not part of a long game that Jess is running after all.

In New Orleans, there’s a nicely choreographed sequence in which Nicky’s crew lifts wallets in an elaborate series of handoffs and distractions in the French Quarter. Robbie makes a case for herself there. The bimbo guilelessness falls away. At some point, she uses a pair of chopsticks to extract something from a purse, and she looks like she’s having the time of her embryonic movie-life. The film is actually fair enough to Jess that, for the whole thing, you assume there’s more to her than meets the eye. Some of that mystery comes from Robbie. She has the opacity of a mannequin, it’s true, but also the hand-buzzer joy of some screwball comedians. At one point, she gets her photo taken for a fake ID, and there’s nothing fake about how happy she looks.

Still, this is one of those “girl walks into a room” movies that kept me on the fence about whether these two are worth the risks they wind up taking to be with each other. But Ficarra and Requa appear to believe in physical attraction, maybe above all logic. When Smith catches Robbie descending a staircase at a party, it’s like Gatsby seeing his Daisy for the first time after all those years. Ficarra and Requa’s last movie was Crazy, Stupid, Love, another ornate, lousily titled adventure in comic romance. There’s nothing in Focus as absurdly sexy as the “Let’s get out of here” montage they build around Ryan Gosling, or as hot as the long seduction sequence they create between him and Emma Stone. But there’s a low-stakes heat here that you appreciate. The movie gives off something reminiscent of old caper romances like Charade, How to Steal a Million, A Fish Called Wanda, the Ocean’s movies, and the underrated Duplicity, in which Julia Roberts and Clive Owen keep their con going so long that what they’re left with is each other.

Caper comedies are films noir without the trauma. In a caper movie, money is fun — it’s funny. There are no depths to plumb. The films skate the surfaces, but the good ones stick the landings. Focus is pretty good that way. The twists are surprising enough, and the air of distrust is thick. Once Nicky’s big street scheme concludes, he treats Jess to Super Bowl luxury seats, where they make silly bets that a Chinese businessman (BD Wong) intrudes upon. He and Nicky make one inane bet that goes from predicting incomplete passes to “guess which player I’m thinking of.” Wong puts on an insinuatingly watery accent and resumes the scene-stealing he did in Father of the Bride Part II, in which Martin Short would pilfer a moment from Steve Martin’s pocket and Wong, with a pinched facial expression and quick hands, would pick it from Short’s. Both parts are stereotypes, but Wong gets to breathe a little more life into this one. The longer the scene lasts and the more of the team’s haul Nicky is losing, the less certain you are about these three. Is Nicky an addict? Could the business guy be that lucky? Is Jess pretending to be freaked out? Where’s the con here exactly? The gambling gets so badly random and the soundtrack so obviously coughs up “Sympathy for the Devil” that you threaten to give up on the scene (bad as the gambling is, the football, in a made-up league, is worse). But you want to see where it goes, what new gear it will kick the movie into. Indeed, the punch line is so well done, if implausible, that you almost want to applaud.

Focus keeps trading nonsense for payoff. The cons and pickpocketing set pieces are credited to Apollo Robbins, a con artist who now gives TED talks on so-called misdirection. If you’ve truly got someone’s attention, you can get away with anything. This movie is a case in point. That French Quarter sequence has been edited and shot for maximum fluidity, but seeing it presented this baldly makes you gasp at how easy stealing wallets (and subsequently skimming credit card information) is made to look. Seeing the hands go in and out of pockets is like watching a TV news magazine do an exposé of, say, mattress microbes: You’re being hit where you live.

In this distracted state, it’s harder to mind that, after the movie’s first side flips over to its second and three years pass and we’re in Buenos Aires, the plot becomes even less plausible. That’s partly because there’s a joshing sensibility at work here. Ficarra and Requa are out to surprise. There’s a wonderful shift in perspective that, at some point, leaves us with a marginal character for a pivotal sequence. It’s a touch that feels like it came from one of Steven Soderbergh’s crime movies. So do the lighting and the lightness. I don’t know what else Ficarra and Requa have planned for themselves, but with Soderbergh out of the movies for now, someone ought to be taking up the mantle of glamorous finesse. There’s no reason it shouldn’t be them.

Another reason not to mind what is an illogical plot, even for a caper film, is that those scenes in Argentina are crawling with character actors, including Adrian Martinez as Nicky’s lewd Persian American sidekick and Gerald McRaney as the head of security for a racing team whose owner (Rodrigo Santoro) is mixed up with Nicky and Jess. McRaney has one scene in a hotel room, with Smith and Robbie, that I couldn’t make narrative sense of once the smoke cleared. But he gathers up all his bygone television-star sex-symbol smolder, masculine menace, and exasperated comic timing (“This ain’t CERN,” he barks randomly at Nicky) to pretty much walk off with the movie. The man from whom he’s stealing is content — or generous enough — to watch him go.

Smith still exudes a jug-eared smolder of his own, but he’s not all the way back to his looser, more confidently outsize self. I don’t necessarily buy him as a lover, not with Robbie, especially. But the movie rarely asks that of him, and here, part of what’s compelling about him as a sexual figure is that you can’t tell when the character is using sex to advance a scheme. Still, it’s striking how tired he looks in Focus. There’s a moment when Nicky has a limo driver pull over so he can say something important to Jess, and just looking at Smith’s drawn expression, you’re nervous he’s going to tell her he’s dying. (TV’s Empire is making disease and disorder sexy again.) Smith is a star who’s best with a foil, whether it’s Martin Lawrence, Tommy Lee Jones, his own son, or the end of the world. He needs a backboard.

But Seven Pounds and After Earth found him in a ponderous, self-mythical state. He really was dying, of some kind of quasi-religious persecution complex. The movies were bad, and he was bad in them, listless and glum and withholding. Strange, too. Smith isn’t a strange actor. Once you’ve experienced him doing outburst and sarcasm, once you’ve seen him stroll into a scene, he isn’t someone you want to see sitting around doing mysticism. That just made me want to jiggle the flusher. I was worried that he was Travolting.

Smith’s first major role in the movies was in Six Degrees of Separation, playing a thief who cons his way into the lives of rich, white New Yorkers. At 46, Smith’s been around long enough to know how to turn negative traits into virtues, how to be adorable under many circumstances, how to perfect a kind of audience con. What I feared in the last seven years (a phoned-in Men in Black sequel notwithstanding) is that Smith had gone earnest, that he couldn’t have any more fun. Focus isn’t a full return to brilliance but a welcome stop, hopefully, on the way there. It’s the frivolous thing more stars should do. Especially ones, like Smith, who’ve seemed miserable or just plain dead: a movie that confirms proof of life.