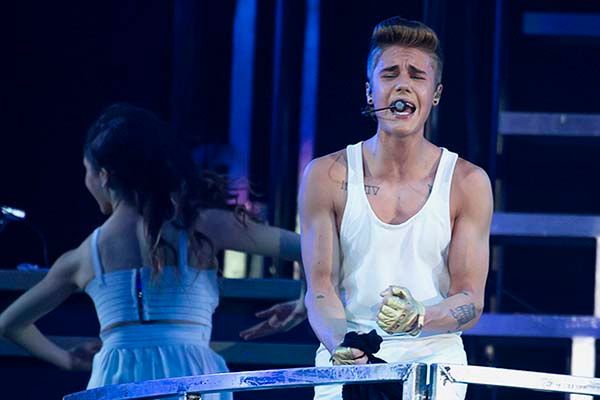 Bad news, fellow Beliebers: Justin Bieber has been busted in Sweden. With drugs. Well, with weed. Also, a stun gun.

The news came first via Stockholm police, who said Bieber’s tour bus was searched because cops smelled what they believed was marijuana smoke emanating. OK, but check this out: The cops smelled the smoke while the bus was parked outside of Bieber’s hotel. They didn’t move in, though, until Bieber’s show that night, sending in a special narcotics unit while the bus was empty. Were Stockholm PD terrified of what bloodbath might occur if they entered the bus while Bieber was onboard? Or did they really just not want to hear anyone say the word “swaggy” out loud? Anyway, they found what was originally reported to be a “small amount of drugs” that was being “sent to a laboratory for an analysis.” So are Stockholm’s cops officially the nerdiest cops in the world? They don’t know any recreational-drug aficionados they can call up and be like “Bro, bro, what the hell is this?”

Not that that was necessary: It turns out, according to TMZ, that it was weed. Adds TMZ, “Cops tell us NO ONE WILL BE CHARGED because they have no idea who was in possession of the drug since the bus was empty. They found the narcotic on the floor of the bus so they have no clue who brought it on.” Call the printing press. Tell them to put a hold on those FREE BIEBER shirts for now.

Moving on: Yes, we knew this was coming. Yes, there was nothing we could do to stop it. But doesn’t this all feel a bit early on the self-combustion cycle? He’s getting sloppy with his international weed usage, he’s wearing Chanel ski masks … sincerely, I ask, for his own sanity: Can we go a week without an update to the Justin Bieber Meltdown files? And, somewhere, Scooter Braun furiously chugs his 17th Diet Coke of the afternoon before crumpling the empty can in his fist.