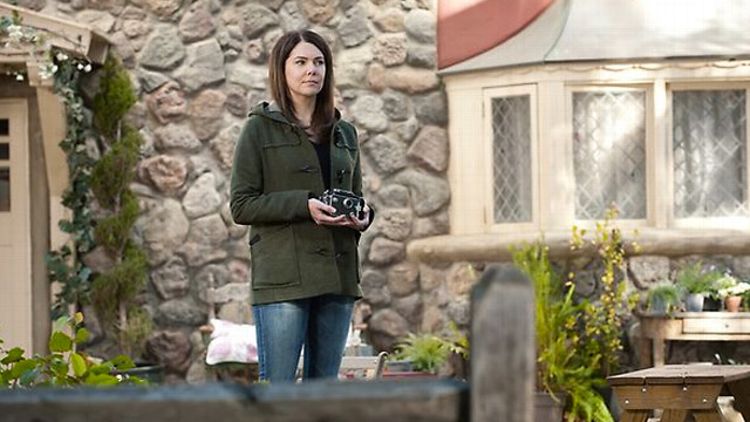 This week we’re trying to see the bigger picture for you. If you renew Parenthood (and you will, right?), you should probably go all in with it. Spend more money and optimize it to cross-promote your other successful franchises. And maybe you can even get Ellen DeGeneres onboard! Thank us later.

Sarah as the Career Mooch

Jacoby: Sarah has no job and lives at home with her parents. She’s basically a Kardashian sister without the hair weave and famous husband. Heading into Season 5, she sits poised for a professional rebound, but as far as we know, she only excels at three things: pouring drinks, taking pictures, and being in love triangles. Unless Rihanna is looking for someone to manage her Instagram account, Sarah doesn’t have a natural fit in the workforce.

To cope with this realization, Sarah downs a couple of bottles of Sonoma red, throws on some Jefferson Airplane, and has herself a little dance party on the sofa bed. Zeek is on sprinkler duty in the yard when he hears the commotion and checks on his 40-something teenage daughter. When he asks her why she’s dancing on the couch and drinking wine straight from the bottle, she sings into the Merlot mock microphone, “Because I’m a total faaaaaailuuuuuure.” Confused but not concerned, Zeek responds, “Well, you sure make failure look fun,” then rolls his eyes and walks out the door. Sarah, inspired, turns off the tunes, turns on the laptop, and starts tickling the keys.

Fast-forward four episodes and she’s just published her first e-book, titled The Fun of Failure. Part memoir, part self-help, The Fun of Failure is an anthem for the unambitious, preaching a life free from the constraints of employment, wealth, and any form of responsibility. The book garners interest among the Bay Area slacker set and leads to an interview on NorCal’s NPR affiliate, KQED. Then it happens.

While driving back from long weekend in Big Sur, Ellen DeGeneres catches the interview and loves Sarah’s “Fuck it, quit your job, and live with your parents” approach. In two weeks’ time, Sarah becomes a bona fide sensation, two-stepping her way to Ellen’s on-camera sofa. Legions of adults looking for comfort in their underachievement adopt the “Fun of Failure” mantra. Sarah is a cult hero for the longing losers. Photos of her guesthouse and sofa bed leak online as testament to her commitment to the mooching lifestyle. Fan sites pop up, money comes in, and Sarah tastes the triumph of accomplishment.

Looking to join her daughter in the “no longer living at home” demographic, Sarah signs a lease to move into a craftsman house in Oakland’s up-and-coming Rockridge neighborhood. She couldn’t be happier. A picture of her loading boxes into a U-Haul outside of Braverman headquarters leaks online. Her fans couldn’t be unhappier. She’s inundated online with insults, accusations, insulting accusations, and unflattering Photoshops. Distraught, surrounded by unpacked boxes in her new home, she cranks up the music, cracks open some wine, and cries her eyes out while signing to herself, “Because I’m a total faaaaaailuuuuuure.” Amber has been watching from the doorway with a housewarming gift. She moves in and embraces her mother as she weeps and whispers in her ear, “You can never be a failure when you have family.” The ’70s soft jam plays, the tears turn to laughs, the audience once again turns to emotional putty in the soft hands of the Braverman clan.

Litman: I know Parenthood is already an expensive endeavor because of its ensemble cast, and NBC is probably not looking to increase the show’s budget. But someone once said you have to spend money to make money, so, Katims and crew, I think you need to take the Bravermans out of their natural habitat. I want to see the clan beyond the confines of their supposed homes and outside of the Luncheonette. This could go in a few directions:

To keep this show going, the Braverman universe needs to expand, and recycling Friday Night Lights alumni isn’t the only way to do it.