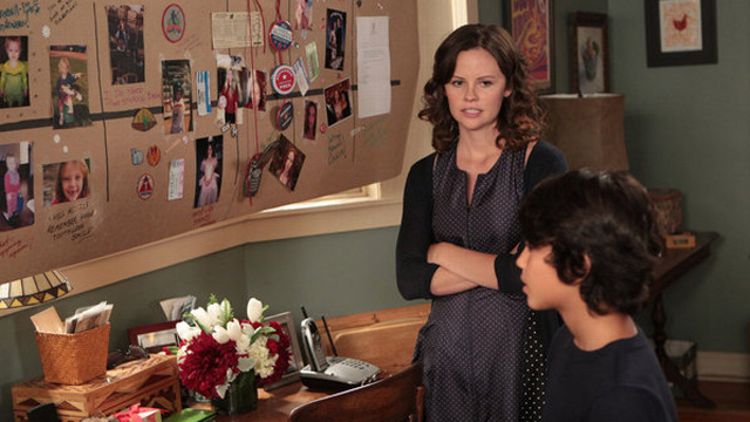 Did you attend the Parenthood PaleyFest panel? We wanted to go, but we couldn’t make it. We did read about it, though. We’re glad that the door is still open for Hank (the sublime Ray Romano) to return, but our favorite fact to emerge from the panel was that the cast has matching necklaces. How adorable! The Bravermans love each other in real life, too. So if this show gets canceled, you will be breaking up a family. Keep that mind and proceed as you wish.

Already in tears thinking about the show,
Juliet Litman and David Jacoby

Jacoby: Haddie has always bothered me, she’s just too nice for my taste. Sure, she smoked a little pot and dated a formerly homeless recovering alcoholic, but let’s be honest here, everyone in Berkeley smokes pot and Alex was the most mature, responsible, handsome, friendly formerly homeless recovering alcoholic in history. Haddie has no edge, no je ne sais quoi, no shortcomings to relate to; she is too perfect-daughtery … until Season 5, of course, when HADDIE GOES BADDIE.

It all starts when she logs on late to a few of the family’s Sunday Skype sessions. Freshman year she was never late, but ever since she moved into an off-campus apartment with three of her friends, she’s 10 or 15 minutes late, seems uninterested and, well, “tired.” “She must be studying hard,” Adam and Christina rationalize. As the season progresses, they notice some questionable items in the frame as she Skypes from her apartment; “Is that a black-light poster of the Cheshire cat behind her?” “Did you see a hint of tattoo on her wrist when she raised her hand?” “Is she wearing a Black Flag T-shirt? How does she even know about Black Flag?” “I swear I saw a vaporizer, that’s what a vaporizer looks like, right?” Adam and Christina are chill parents, though; they chalk it up to Haddie just enjoying the college experience in lovely Ithaca. Ithaca is Gorges. The next time she logs on she’s wearing a winter hat, no big deal, I mean, it’s October in upstate New York, but she hesitates when Adam and Christina ask her to take it off. Momtuition tells Christina something is up and she demands that Haddie remove her hattie (sorry, I can’t resist). When she does, we see that she is rocking one of those Cassie/Rihanna/Ellie Goulding half-the-hair-shaved, half-the-hair-long haircuts. When you are an edgy pop star who takes Instagram pictures of yourself smoking Dutch Masters in a thong, you can pull off this hairstyle no problem. It doesn’t sit so well around Haddie’s cherubic face. Adam and Christina are no longer chill, they are concerned.

Haddie’s arrest doesn’t alleviate those concerns. No, it wasn’t drugs, or alcohol, or shoplifting, or prostitution, I mean, it’s Haddie. What did Haddie get arrested for? Protesting fracking. At their wits’ end, Adam and Christina book Haddie a flight home for Thanksgiving. They’re going to have a talk. Two days before Thanksgiving, Haddie announces that her friend Sam is going to be joining them at the holiday table. It’s less of a request and more of a notification. Haddie insists that she can find her way home from the airport and that she will meet them at the house. When she arrives on the doorstep holding hands with Sam, Adam and Christina shoot each other a “Holy shit! I-am-totally-freaked-out-but-pretending-that-this-is-cool-even-though-I-am-totally-freaked-out” glance. Sam is not a Samuel, Sam is a Samantha.

To be honest, Mr. Greenblatt, I haven’t fleshed out the rest of it, but this should be enough to get your writers going on a strong storyline for Haddie that doesn’t involve moving production from Los Angeles (see, Mr. Greenblatt, we have the bottom line in mind). If you aren’t into this one for Haddie, I have another one for her that is much less complicated. It’s called, “Haddie Goes Fattie,” and in this one she … well, you know.

Litman: While we’re on the topic of college, let’s talk about Drew Holt, son of Sarah Braverman. Instead of sending his mom into financial dire straits like Haddie did to her parents, Drew opted for the close-to-home, in-state, world-class University of California—Berkeley. He’s a freshman now, but unlike most of his classmates, he’s living at home, Brandon and Brenda Walsh—style. Drew assumed this would be fine because he never had a bustling social life. Other than the time his girlfriend got pregnant and had an abortion, his high school days were not filled with many transgressions, or acts of rebellion, or friends.

It turns out that Drew is the kind of kid who thrives in college. His taciturn demeanor is perfect for Berkeley. Where he once was a blubbering teenager, he’s now the quiet guy at the end of the row in psych lecture who stares out the window, emanating cool. The people around him assume he is quiet by choice, not by default, and Drew finds himself with more friends than ever before: three dudes who are also desperately looking for acceptance. One of these new friends tells Drew about a party. Drew says he’ll go in his typical awkward way. (One of my favorite things about Parenthood is how each character delivers his lines in a unique way. Drew’s might be my favorite.) For most college kids, attending a party is as easy as deciding what to wear and making sure you have at least two people to walk in with. But for him, he knows his mother will ask where he’s going. Luckily, Sarah wants Drew to love college since he’s the first Holt to enroll, so she encourages him to go and gives him cash for a cab home.

Drew breaks the cardinal rule of college parties: He drinks way too much of the sugary house beverage. And if you’re attending Berkeley, shouldn’t you just be smoking weed? He arrives back ready to vomit. Sarah knows how this goes — she’s a bartender! Even though alcoholism runs in this family, she’s not that worried. She’s just glad that she’s not dealing with a Haddie-esque transformation and there’s no hair to hold back. The next morning, Drew stumbles down to the kitchen. Sarah, Zeke, and Camille (if she hasn’t been killed off per our earlier recommendation) are all there, ready to make jokes about Drew’s first drunken college night. This kid is growing up!

Overplayed Song of the Week: Bruno Mars, 'When I Was Your Man'