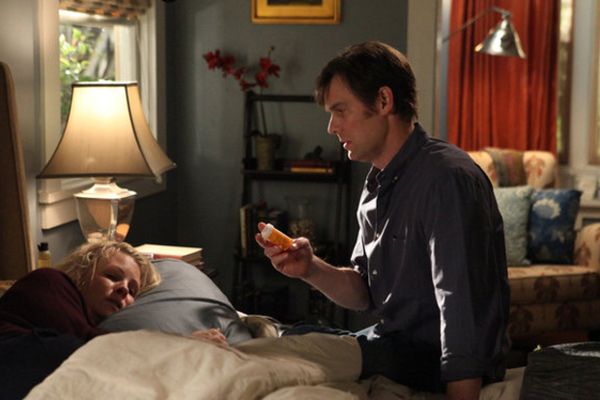 I understand if you don’t have time for us this week. The New York Times article about NBC’s ratings fall was astonishing. Since SNL is your top show and you have to give away free commercials, you probably won’t be reading this missive because you will be drowning your sorrows at your local bar. (Or maybe a bar in your home because I’m assuming you are really rich?) The good news is this: You already have a dedicated Parenthood fan base, composed of people like us, who see your calamitous situation as a net-positive. You have to renew our show now because your slate is nearly empty. Right?

Here’s something for you to consider when the show comes back for Season 5: Adam needs some work. I cannot stand him. He’s self-righteous, he handles a crisis worse than anyone else in his sizable family, and he’s generally irritating. That last part may be more of a “It’s not you, it’s me” situation, since I also despised Nate Fisher on Six Feet Under. What a selfish jerk! I did like Casey McCall on Sports Night (though obviously not as much as Josh Charles’s Dan Rydell), so I believe there’s a way to salvage Adam Braverman. What does he need to do to jump up the Braverman Power Rankings? He needs to relax.

We’ve rarely seen Adam have genuine fun. To be fair, he’s had a lot on his plate: His son has Asperger’s, his wife had breast cancer, he lost his job, he had an accident-baby, and his oldest daughter had a recovering alcoholic boyfriend who lived on his own in what Adam construed as a sex den. (We all love Alex, played by Michael B. Jordan. We need him back on the show.) Uptight Adam would never allow himself to indulge in some less-than-legal substances, but I think it’s just want he needs — in the form of edibles, purchased in San Francisco’s Dolores Park.

Adam and Crosby’s Luncheonette recording studio needs an influx of capital. Luckily, their business is in what may be America’s most cash-rich city. They meet with a possible zany investor who likes to take his meetings outside, specifically in the sunny spots of the Mission District’s most hipster-infested park. In the middle of the meeting, the investor purchases some of Dolores Park’s notorious pot truffles. Adam, afraid of being rude, is forced to eat one. Now, it would be more predictable for Adam to get high and then freak out about being high, but I see this going the other way. Adam finds an unusual calm that he didn’t know he had in him, he wins over the investor, and he saves the business. Don’t forget that while enduring chemotherapy, his wife, Kristina, indulged in some pot as well. Now they have a new activity to enjoy together. Unless Peter Krause is contractually bound to play an uptight guy, he needs some lightheartedness after four seasons of emotionally draining plot lines. Adam needs to find his personal vending machine of happiness. Make it happen, Bob Greenblatt.

Maybe you think Adam is just fine as is. In that case, you are wrong, but my podcast partner, Jacoby, and I will be back next week with even more direction on how to get Season 5 going.