ScarJo Doubles Down as the World’s Foremost Singing Actress, But Anna Kendrick’s Coming on Strong 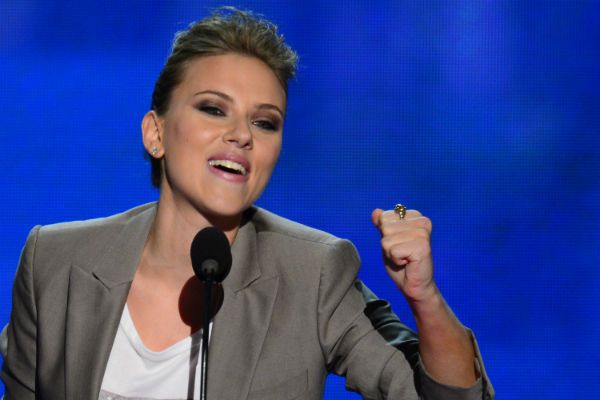 The title of World’s Greatest Living Singing Actress isn’t a simple one to bestow. You might well think that Zooey Deschanel could make a rightful claim to the crown: Not only is she four albums deep with She & Him, her collabo with respected folkster M. Ward, but those albums were put out by freakin’ Merge Records, which is really, very, quite indie-rock of her. I mean, there might actually be people out there who don’t even know that the chick with the bangs from She & Him has a day job, and who else is bringing that kind of cred to the Singing Actress game? But, see, then you’d be overvaluing the Singing side of things. Right now Zooey Deschanel is part of an ensemble cast on one of the best shows on TV; she does a very good job, but is regularly, just about on a weekly basis, outshone by her cast mates. The Singing credibility is therefore mitigated by the lack of Actor star power (why, yes, this whole thing does hinge on quite a delicate, mysterious formula), which then opens the door for Scarlett Johansson — the one true beholder of the title World’s Greatest Living Singing Actress.

ScarJo’s got both sides of the coin hot and piping. The Avengers and its various forever-more sequels on one; her totally unpanned Tom Waits covers album, her Serge Gainsbourg and Brigitte Bardot via Pete Yorn–duets homage, and, oh, just this Oscar nomination for Best Song on the other. Now, smartly, even with the title firmly in her grasp, Johansson’s not letting up. On Tuesday, she told Live With Kelly and Michael that she’s started a band: “We’re called the One and Only Singles. We’re kind of doing our Go-Gos thing.” The Go-Gos! Who doesn’t like the Go-Gos? Who wouldn’t want to hear Scarlett Johansson providing the world with irresistible power pop? And so who will ever able to challenge Scarlett’s reign?

Wait … from out yonder … a dark horse contender. Says EW: “Anna Kendrick has already enjoyed a few weeks on Billboard’s Hot 100 with her breakout a cappella hit ‘Cups,’ from the Pitch Perfect soundtrack. Now, in a sign of just how popular the movie has become since its December DVD release, ‘Cups’ is getting pushed to mainstream radio … the song hits stations on March 26.”

Check out “Cups,” as performed for a very appreciative David Letterman:

OK, so, Anna Kendrick — wait, sorry, excuse me: Oscar-nominated for acting Anna Kendrick — might have a radio smash on her hands? There are a lot of variables yet to come, and so it’s certainly too early to worry quite yet — but from now on, every time Scarlett hears that tinny cup-slamming sound, she’d be wise to remember: Heavy is the head that wears the World’s Greatest Living Singing Actress crown.