Blah Cappella: The Mess and Minor Insult of ‘Pitch Perfect 2’ 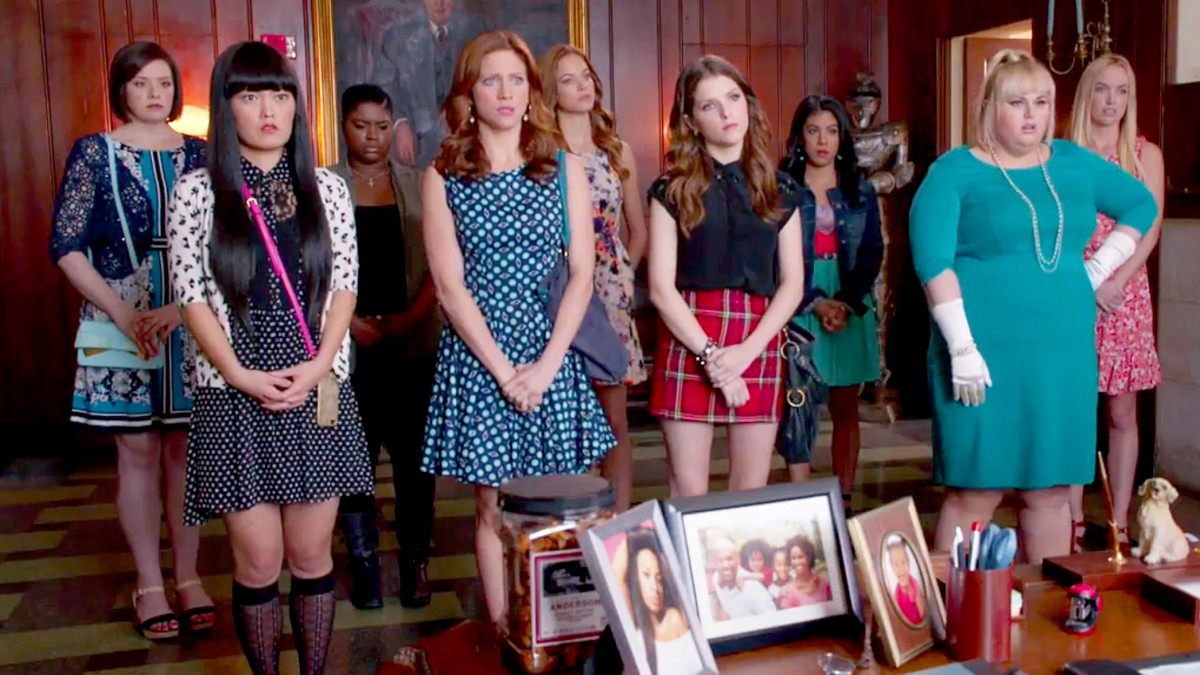 The appeal of 2012’s Pitch Perfect had everything to do with Anna Kendrick. She was a cool, kind-of-uptight Alice in the nerdy, earnest, cutthroat Wonderland of competitive a cappella singing. Kendrick radiates intelligence without making it seem like a safety hazard, the way it always appears to be with Jodie Foster. Some of what that intelligence suggests is that she isn’t a joiner — of sororities, of singing groups, and certainly not of singing groups that are basically sororities. You didn’t think Kendrick would even bother to sing. But there’s a moment in the first Pitch Perfect, during a riff-off battle, in which Kendrick leads the charge against a bunch of boys with a snarling version of “No Diggity.” Her pretty, birdlike voice flashes a couple of talons. It was like watching hoop-skirt Sandy become leather-pants Sandy for the last number in Grease.

Kendrick’s character, Beca, turned out to be a nerd, too — her musical superpower was doing mash-ups: two or three songs become one. It was a specialty that gave her group, the Bellas, the winning edge. That first movie was a confusion of ideas, one of those charmers that also indulged an urge to be gross and brazenly offensive because there was still some novelty in it. The musical numbers were as messy as they always are in musicals now, whether we’re talking about Glee or any of Rob Marshall’s Vitamix smoothies. But the actors sold the mess — especially Skylar Astin and boys who had names like Benji and Bumper. I actually left that movie thinking that Astin, who’s got the shameless sense of showbiz that is college a cappella, could be a star. He got a show on TBS instead.

This is all to say that I’m not sure that movie needed an encore. Or: I’m not sure how you’d pull one off, since most of the actors looked too old to be freshmen in the first round. So when you see Kendrick in Pitch Perfect 2, she seems like such an adult that the only explanation for her being a college senior is that this is actually 26 Jump Street. The cool is gone. One of the group’s new members (Hailee Steinfeld) is an annoyingly earnest legacy Bella who just … can’t … wait to rush. That’s telling: What’s missing from this movie aside from music (the numbers are so thin they feel scarce) is the arc of self-discovery.

Kendrick seems ready for adult parts (she’s 29), but the plot treats her like an ingenue. Beca secretly focuses on a record-label internship that interferes with her innovations for the Bellas’ repertoire. But at the label, she gets to surprise everybody with her flair for mash-ups all over again. These scenes feature Snoop Dogg, playing himself and recording a Christmas album (for him, Beca mashes up “Winter Wonderland” and “Here Comes Santa Claus”). The best part of the internship is Keegan-Michael Key, who plays Beca’s flamboyantly unimpressed boss. He could take over for any of the characters on Empire — or all of them — and sling that show further into the ionosphere.

In the meantime, there’s the other plot, in which the color commentators played by Elizabeth Banks and John Michael Higgins tell the Bellas that the group has been barred from the international a cappella federation (or whatever it is) because Fat Amy (Rebel Wilson) has a wardrobe malfunction at the Kennedy Center during a birthday performance for President Obama. The international overreaction — from Jake Tapper to hate mail from Sonia Sotomayor — is good and absurd.

The rest of the movie is chaotic and random (Kay Cannon, the 30 Rock veteran, wrote both installments; Banks directed this one). The group can get its good name back by toppling a hydraulic German outfit — Das Sound Machine — and winning the world championships in Copenhagen. But the movie is in no hurry to get there and barely feels compelled to bother with drama.

The party sequences have neither a point nor any life. The big sing-off in the commercials takes place in the dungeon of a rich, weird, deep-fried a cappella fanatic played by David Cross. He introduces a category (Song About Butts!; I Dated John Mayer) and the assembled groups, including the Bellas, the Green Bay Packers, and a bunch of comedians (Reggie Watts and Jason Jones). This sequence doesn’t not work, but the arrangements themselves never build to any kind of excitement. And as in the finale, there’s no interest in surprising us even a little bit. The ’90s hip-hop segment is an aural traffic jam. (I have to ask how we can still call this a cappella singing when the soundtrack pumps beats into almost every number.)

Astin has nothing to do this time but be Kendrick’s kickstand. The guys playing Bumper and Benji (Adam DeVine and Ben Platt) get to flirt with Wilson and Steinfeld, but DeVine and Wilson are just taking their shtick from the first movie out of the microwave. These two do somehow produce the movie’s one memorable musical moment, which involves a canoe and Pat Benatar’s best song. That moment is special because it’s the only one in which singing seems to function as an organic mode of communication: The lyrics mean something, and they’re somewhat meaningfully sung. It’s like watching one Muppet attempt to win back another. Why not build in more of those? Why not let Kendrick have more musical time to herself? Why keep her as flustered and unsure as she is here? With these two movies, her portrayal of Cinderella in Into the Woods, and a couple of lovely moments with Jake Gyllenhaal in End of Watch, there’s now a not-unreasonable expectation that Kendrick should be singing and dancing more. She’s not the greatest at either, but she works as a musical star. All her thinking makes her stand out. Instead, the filmmakers chase dumb gags and tell limp jokes.

The movie invites you to celebrate its diversity. The Bellas are, indeed, not all white. But none of the characters of color has been promoted to do more than act like a weirdo. The other new addition, besides Steinfeld, is a Guatemalan named Flo (Chrissie Fit), who caps every exchange with a tale of poor-migrant suffering. Hana Mae Lee returns as the mousy Japanese girl, Lilly, with no scatological boundaries. The songwriter and producer Ester Dean plays the black girl and lesbian, who, when she isn’t flirting aggressively, actually has to quip, “What kind of white shit is this?” Asking a question like that in a film about a cappella singing is like working in a barn and complaining about the hay.

The movie might think this is a continuation of the very funny racism and sexism that Higgins gets to deliver and Banks, seated beside him, either wearily pooh-poohs or cosigns. But their bigotry is a satire on color commentary. With Fit, Lee, and Dean, the jokes themselves are their race and sexual orientation. What’s supposed to be funny about Fat Amy is there in the name, but she gets a man, most of the good dialogue, and a couple of plot lines. Even Steinfeld arrives fully developed, with a love interest, and her character gets to write the awful ballad that Beca produces and that helps turn the judges’ heads at worlds. The song is called “Flashlight.” Cannon could’ve used one to find something for the nonwhite characters to do besides act comically colored.